Happy Monday (and Happy July!) This week’s Monday’s Music is dedicated to my FAVORITE screenwriter and director: Wes Anderson. Each of the nine songs listed will come from one of Wes Anderson’s eight full length feature films (which means Anderson’s short films Hotel Chevalier, Castello Cavalcanti, Prada: Candy and Cousin Ben Troop Screening with Jason Schwartzman will not be included. Nor will The Squid and the Whale which Anderson produced.) Since I’ve already used Nico’s These Days (who could forget that iconic Royal Tenenbaums scene) in Monday’s Music 01, it will unfortunately not be making an appearance on this list. 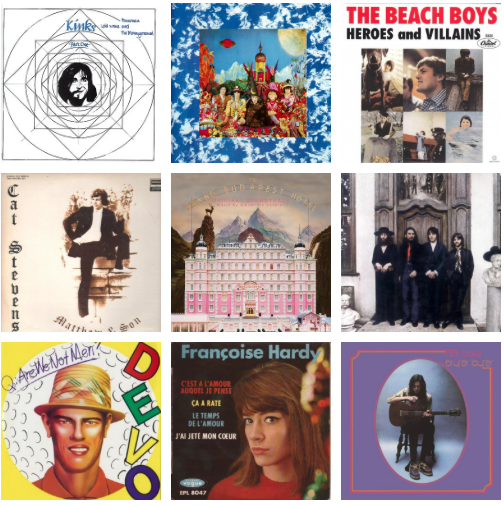 Strangers – The Kinks, The Darjeeling Limited // 2000 Man – The Rolling Stone, Bottle Rocket // Heroes and Villains – The Beach Boys, Fantastic Mr. Fox // Here Comes My Baby – Cat Stevens, Rushmore // Traditional Arrangement: Moonshine – Alexandre Desplat, The Grand Budapest Hotel // Hey Jude – The Beatles, The Royal Tenenbaums // Gut Feeling – DEVO, The Life Aquatic With Steve Zissou // Le Temps De L’amour – Françoise Hardy, Moonrise Kingdom // Fly – Nick Drake, The Royal Tenenbaums
I have a ‘Wes Anderson’ playlist on my phone so it wasn’t hard to find songs. What WAS hard was narrowing the list down to only nine! I think I might have to make a part two to this Monday’s Music theme because they are so many amazing songs I had to leave out. Wes Anderson has such a way with film but he also has impeccable music taste. I love how he doesn’t use ‘pop music’ in his films. He mostly uses older or unknown songs, which is great because the older songs are given a second life and the unknown songs can find new audiences. The Grand Budapest Hotel was the hardest film to pick a song for because it didn’t contain any mainstream music, it was simply score.
Did your favorite Wes Anderson tune make the list? If it didn’t don’t worry, there WILL be a part two!
12 Replies