Since Monday’s Music 03. featured all my favorite tunes from the 1960’s,  I decided to continue with the ‘decades’ theme! This week’s Monday’s Music is dedicated to my favorite songs from the 70’s. As with every other MM playlist, it was really hard to narrow it down to only nine songs! 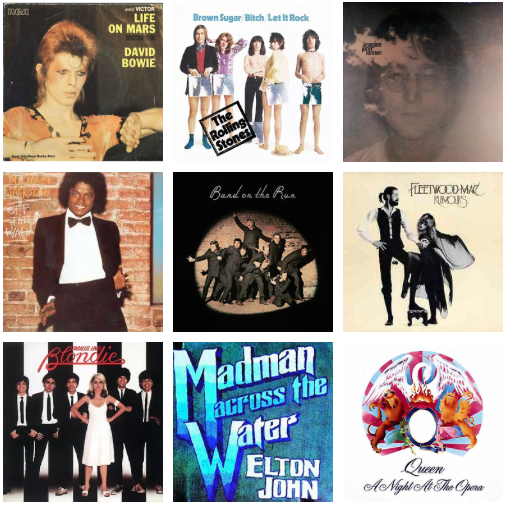 This might be my favorite playlist so far! I literally listen to each and every one of these songs EVERYDAY. I almost didn’t include Bohemian Rhapsody or Go Your Own Way because they’re so overly played (and there are so many other great songs on Rumours and A Night At The Opera) but they are truly classics so I thought “why not!” As soon as I started thinking about songs from the 1970s, the first thing that came to mind was: Don’t Stop ‘Til You Get Enough! Don’t Stop ‘Til You Get Enough is one of my favorite MJ songs! I remember listening (and dancing) to it all the time when I was little.

If I had to pick a favorite song on this playlist, it would have to be a tie between Tiny Dancer and Brown Sugar. I was in LOVE (I still am) with Mick Jagger as a kid! I thought the Rolling Stones were the best band of all time and I was seriously mad I wasn’t born in the 60s!

I thought it would be fun to include Band on The Run and Imagine! Two different Beatles, two great songs!

What’s your favorite songs from the 70’s?