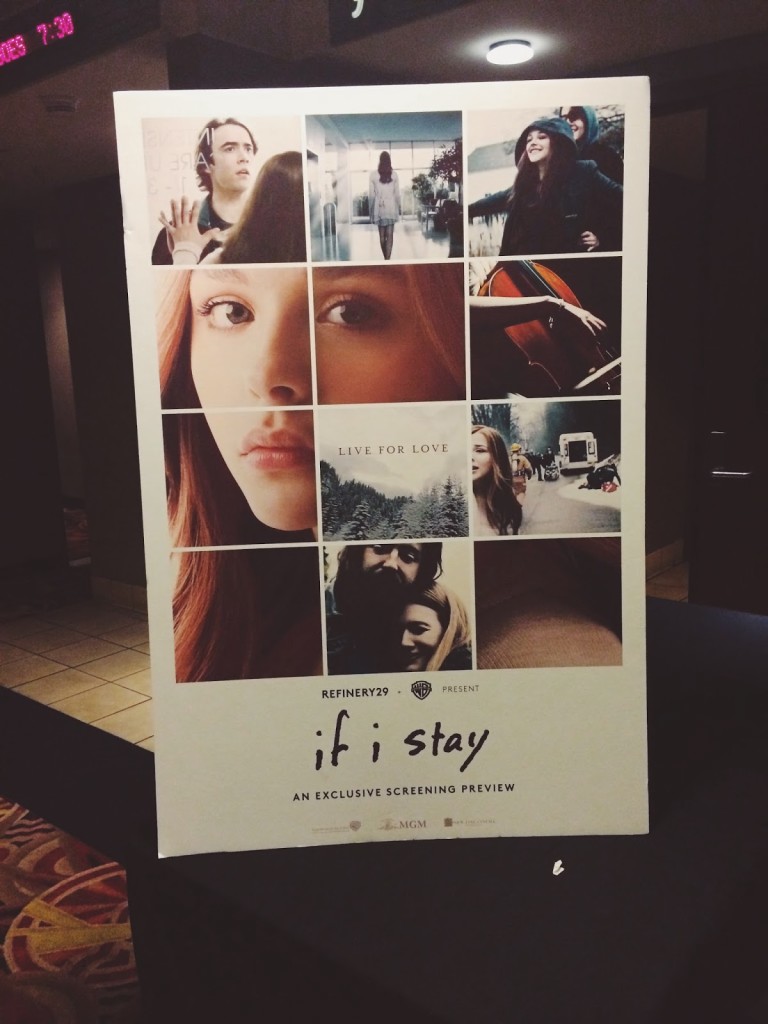 / 5 [I prefer bouquets to stars]
If I Stay, 1 hr. 46 min
Genre: Drama
Staring: Chloë Grace Moretz, Jamie Blackley, Mireille Enos and Joshua Leonard
Last month I had the amazing opportunity to attend an exclusive advance screening of If I Stay hosted by Refinery29 & Warner Brothers. Immediately after the film was over, the entire audience got a HUGE surprise when Gayle Forman (the author of If I Stay), Chloë Grace Moretz and a Warner Brothers Rep came out for a special Q&A. They answered audience questions and talked about their favorite scenes. Gayle said when she first wrote the book she had Chloë in mind for Mia but at the time Chloë was too young. Luckily, since it takes a while for studios to pick up films, Chloë’s age perfectly coincided with Mia’s. Gayle also talked about her inspiration for writing the book. Apparently, a very similar situation happened to a good friend of hers and it got her to thinking about ‘how would I handle that situation?” I love meeting authors (especially since I want to be one) and it was super fun meeting Chloë (she’s ADORABLE!)

I must warn you, I NEVER read If I Stay, nor did I know much about the overall premise of the book. Basically, I went into this movie knowing NOTHING (so my take on the film might be a little different from a die hard If I Stay fan or someone who read the book. Since the book is usually better than its film counterpart, I can imagine that someone who had read the book will have a completely different reaction to the film.)

If I Stay tells the story of seventeen-year-old Mia who, following a disastrous car crash, must decide whether to give up on life or to stay and deal with the pain and suffering of the crashes aftermath. The film follows Mia in Limbo as she drifts between present day events and flashbacks. Flashbacks play a key role in this film by creating the backstory for the audience. As Mia relives the golden years of her life, she comes to the realization that she has an important choice – should she live or die?

Favorite Character: Mia Hall (Adam Wilde was a CLOSE second.) I think Mia is a pretty relatable character. There’s nothing super special about her (expect for the fact she’s an amazing cello player) and that’s why I like her. She’s just a normal girl who has to make one of the hardest decisions a person could ever have to make.

Favorite Scene: There’s one scene in the film where everyone is at a family get together and all of sudden they break out some instruments and it turns into a bonfire jam session. They play Today by The Smashing Pumpkins and it was seriously one of the cutest scenes in the entire film. Not only was that my favorite scene but after the screening was over both Gayle and Chloë said it was their favorite scene too (great minds think alike!)

Favorite Line: “Sometimes you make choices in life and sometimes choices make you.”

Favorite Song: “All Of Me” – Tanlines. In a film that’s basically dedicated to music, it’s hard to pick just one favorite song. Since I’m such a huge fan of Tanlines, that made this decision a little bit easier.

Here’s some of the awesome If I Stay stuff I got at the screening: 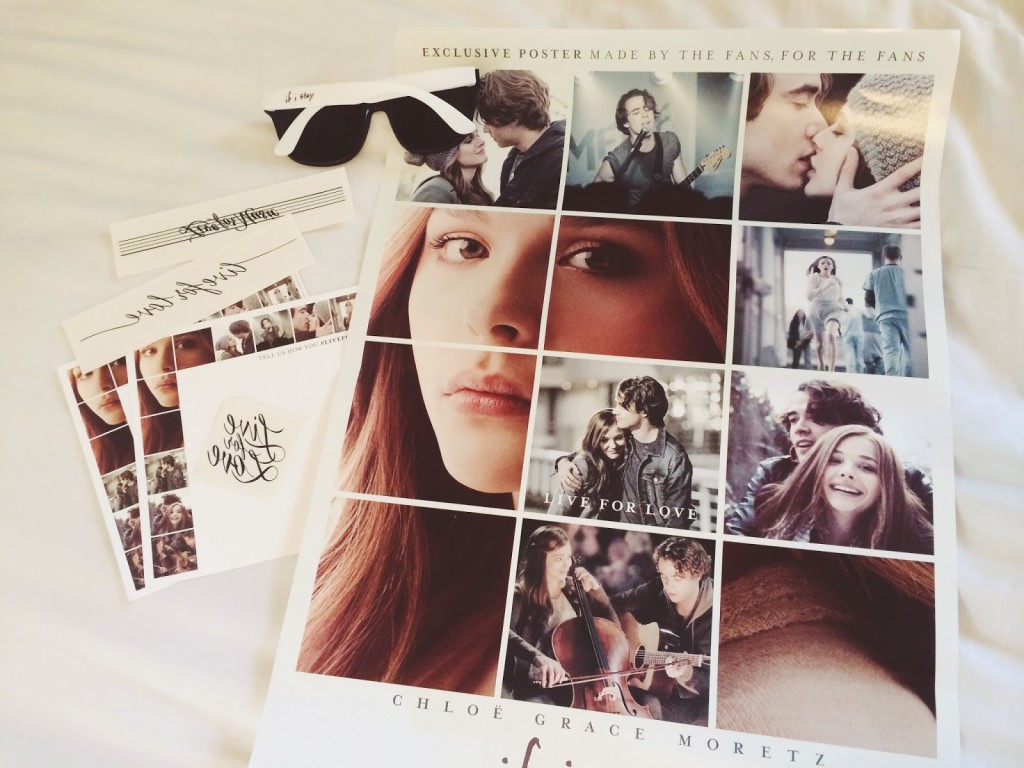 I got a large poster (I actually got 8 posters, I don’t know why my bag had so many in there! I’m thinking about giving them away to my friends who have read the book), three Tattly temporary tattoos (two of them say “Live for Love” and the other one says “Live for Music), sunglasses, an If I Stay bag (not pictured) and little postcard sized mini posters (I got 4.)

Are YOU excited to see If I Stay when it hits theaters next week?