Happy Monday & Happy September! I can’t believe how fast time is going! It feels like May was last month. I guess time flies when you’re having fun! Instead of listing my top nine songs, I’ve decided to spice things up and list my favorite albums for this ‘Monday’s Music!’ Like always, it was super hard to narrow it down to only nine, so you can expect more favorite albums selections in the coming Monday’s! 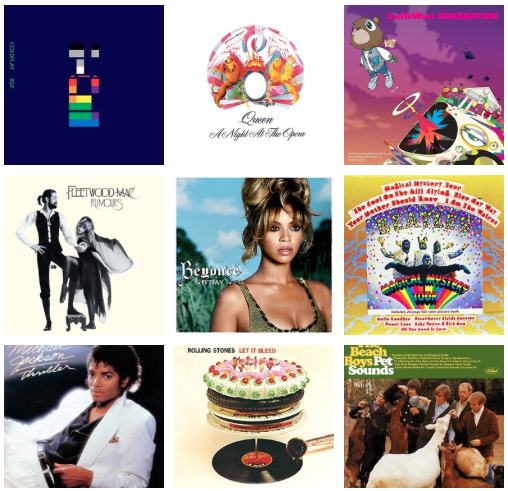 It’s no secret that Coldplay is my FAVORITE band (seriously, I’ve been a fan of theirs since Parachutes came out when I was seven years old!) Even though I love all their albums, X&Y will always hold a special place in my heart. For one thing, my favorite song of all time Swallowed In the Sea is on that album. Also, it’s one of those rare albums were EVERY SONG is amazing. I can honestly listen to the entire X&Y album without skipping ANY songs (now that’s rare!).

If I had to pick a “favorite” solo artist, it would definitely be Kanye West! Believe it or not, we actually have a lot in common. We both moved to Chicago at the age of three, we were both raised by single moms who happened to be teachers and we both love Kanye West (but honestly, no one loves Kanye more than Kanye!) Graduation is actually tied with College Dropout for my favorite Kanye albums but honestly, every Kanye West album is pure genius (say what you what about him personally, but no one can deny what an amazing artist he is!)

Coldplay’s Swallowed In the Sea might be my favorite song of all time but the Beatles Magical Mystery Tour is my favorite album of all time! It’s just so whimsical and fun. I remember when I was a little kid on the first day of school when we had to fill out ‘I am (insert name)’ name tags, I would always put ‘I am the Walrus’ (like Arrested Development, I was definitely ahead of my time!)

I grow up listening to ‘older’ artists like Michael Jackson, The Beach Boys, Rolling Stones and Fleetwood Mac (my mom was a 70’s kid so I grew up listening to all her favorite bands) so of course I had to include my favorite albums of theirs!

What’s some of your favorite albums?
*Be sure to check out other Monday’s Music playlists HERE*
5 Replies