Happy Monday! I’m continuing on with my ‘favorite songs of the decade’ with the 1980’s! From indie to rock to the rise of hip-hop, the ’80s were an incredibly varied decade. Like always, it was hard to narrow it down to only 9 songs because the 80’s seriously ROCKED! I decided not to include anything by Michael Jackson because he deserves his own playlist! I also decided not to included ‘Don’t Stop Believin’ because that’s a song for another list. Without further ado, here’s my favorite songs from the 1980’s: 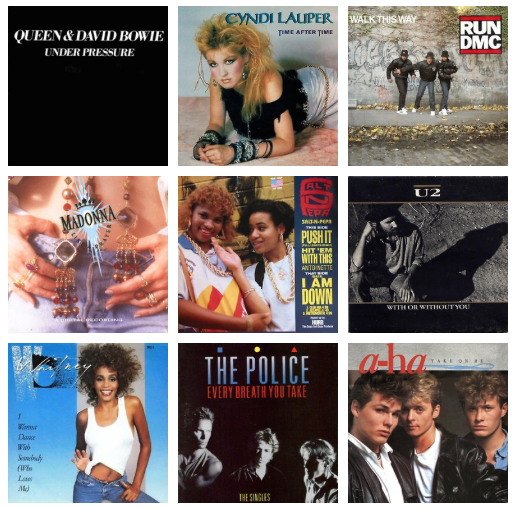 Under Pressure & Every Breath You Take are two of my most played songs from this list! Hearing them instantly brings me back to my childhood! My family are HUGE Queen fans so I grow up hearing their songs on repeat. I’m also a huge David Bowie fan! If you’re in Chicago, there’s an AMAZING David Bowie exhibit at the Museum of Contemporary Art that’s well worth the $25 admission!

Even though Like A Virgin was super popular in the 80’s, my mom’s all time favorite Madonna song is Like A Prayer so I heard it all the time growing up! I’ve always been a big Madonna fan. I love how she can reinvent herself to stay relevant with the current generation! Kudos, Madonna!

I’m a HUGE Girls Just Wanna Have Fun fan (who isn’t?) but I chose Time After Time because that’s the Cyndi Lauper song I most remember jamming to as a kid (maybe because it played in so many films and TV shows!)

It couldn’t be an 80’s playlist without I Wanna Dance With Somebody (Who Loves Me)! I was obsessed with this song (and Whitney Houston) as a kid! Push It & Walk This Way really sum up all the new kinds of music the 80’s brought!  I watched the Walk This Way music video the other day and it made me smile! I love when two genre’s collide to make a unique and clever new sound!

As a Friends lover and U2 fan, I couldn’t in good conscience leave With or Without You off this list! Every time I hear this song (even to this day) I instantly think of Ross and Rachel!