It’s December, which means the countdown to Christmas can OFFICIALLY begin! I don’t know about you, but some of my radio stations have already started playing non-stop Christmas music (they actually started last week!) No complaints here though, what’s not to LOVE about Christmas music (it’s just so cheery and joyful, I can’t help but sing along.) Like always, it was SUPER HARD to narrow it down but I’ll save my other favorites for next year’s Monday’s Music Christmas playlist. Here are nine of my favorite holiday songs: 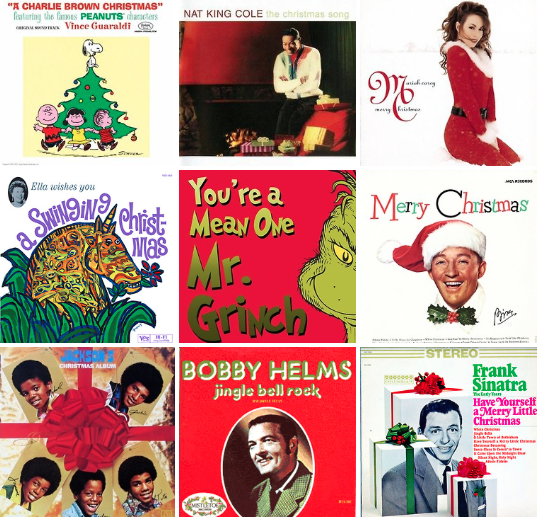 This is my absolute favorite time of year and not just because of the Christmas. I just love everything late fall & winter has to offer! I love how the city comes alive with lights and decorations. I love going downtown to look at the Macy’s Christmas window displays. I love all the yummy food and time I get to spend with my friends and family. It’s just the greatest time of year!

FUN FACT: Sleigh Ride (the Ella Fitzgerald version especially) is my FAVORITE Christmas song! It’s funny because it’s wasn’t originally written as a Christmas song. It was composed by Leroy Anderson who got the idea for the song during the heat wave in July 1946. In fact, the song’s lyrics never specifically mention any holiday. A lot of people actually thinks that it has to do with Thanksgiving because of the line “When they pass around the coffee and the pumpkin pie.” Regardless of what the song was intended to represent, it’s still my favorite Christmas song.

I’ve been playing Christmas Time Is Here (Vocal) on repeat since Thanksgiving ended! It’s tradition in my family to put up our Christmas tree the day after Thanksgiving (aka Black Friday) and we always listen to this song as we decorate the house! Have Yourself A Merry Little Christmas & The Christmas Song are my go to ‘slow’ songs! I usually play them while I’m wrapping presents and sipping hot chocolate. When I was younger every year (and I mean EVERY YEAR) my school did a lip sync performance of The Jackson 5’s I Saw Mommy Kissing Santa Claus (the funny thing is, I went to three different elementary schools and they ALL did this! Maybe it’s a Chicago thing?)

What’s your favorite Christmas/holiday tune?
*Be sure to check out other Monday’s Music playlists HERE*