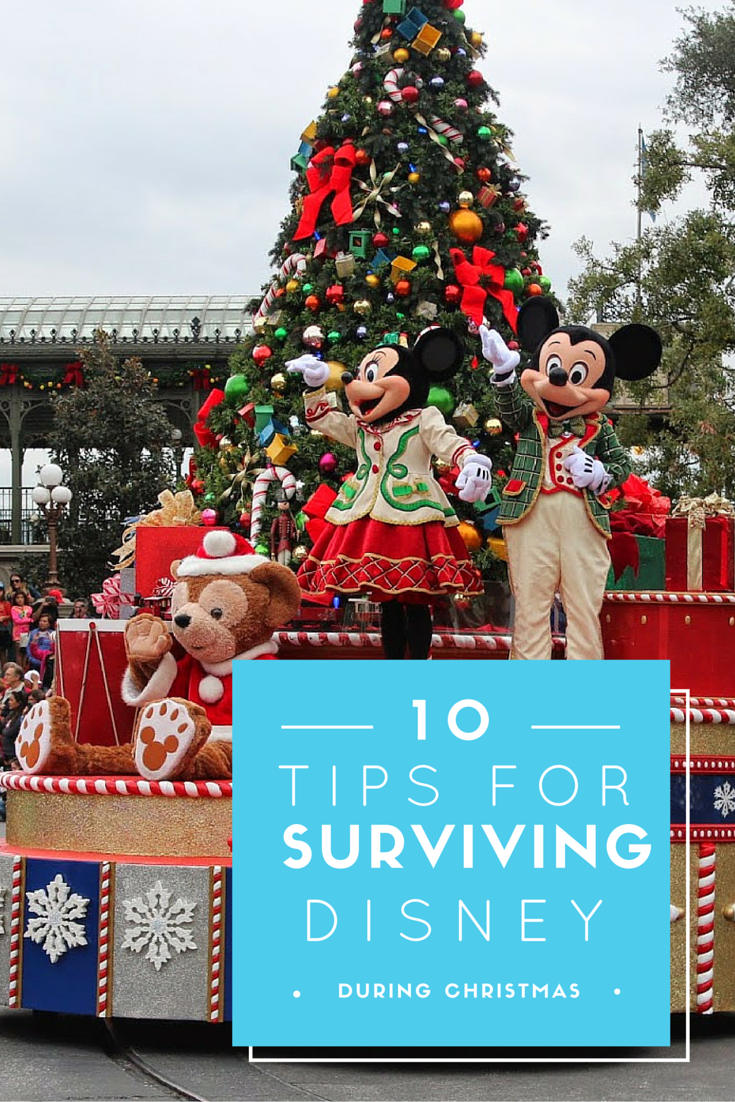 There’s nothing quite like spending the holidays at Disney World. The parks are all decked out with decorations and lights. The shops are filled with holiday goodies and even some of the rides get a Christmas facelift. It’s truly a magical experience! While it can be an amazing experience, Disney does tend to get a little crazy toward the end of the year. Recently, I had the wonderful opportunity to spend the holiday’s at Disney World. While I’m no stranger to Disney, it was my first time visiting during Christmas. While there, I picked up a few tricks of the trade that I wanted to share with you all. Here are my ten tips for surviving Disney World during the holidays/Christmas:
1. Be prepared for crowds. 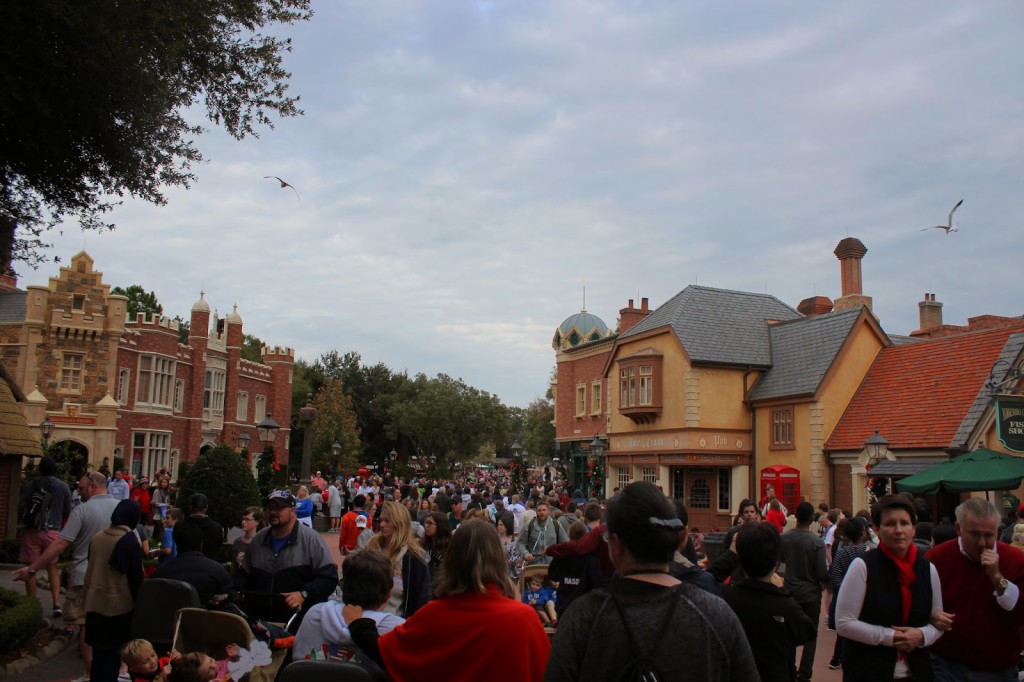 December is a very busy time for Disney World. In fact, Christmas is one of the most crowded days of the entire year. You can expect wall to wall crowds starting the week leading up to Christmas until about New Years Eve. All those people mixed with that Florida heat can get a little irritating at times but if you mentally prepare yourself for the crowds, you’ll be okay. Remember, it’s Disney, there will always be crowds. 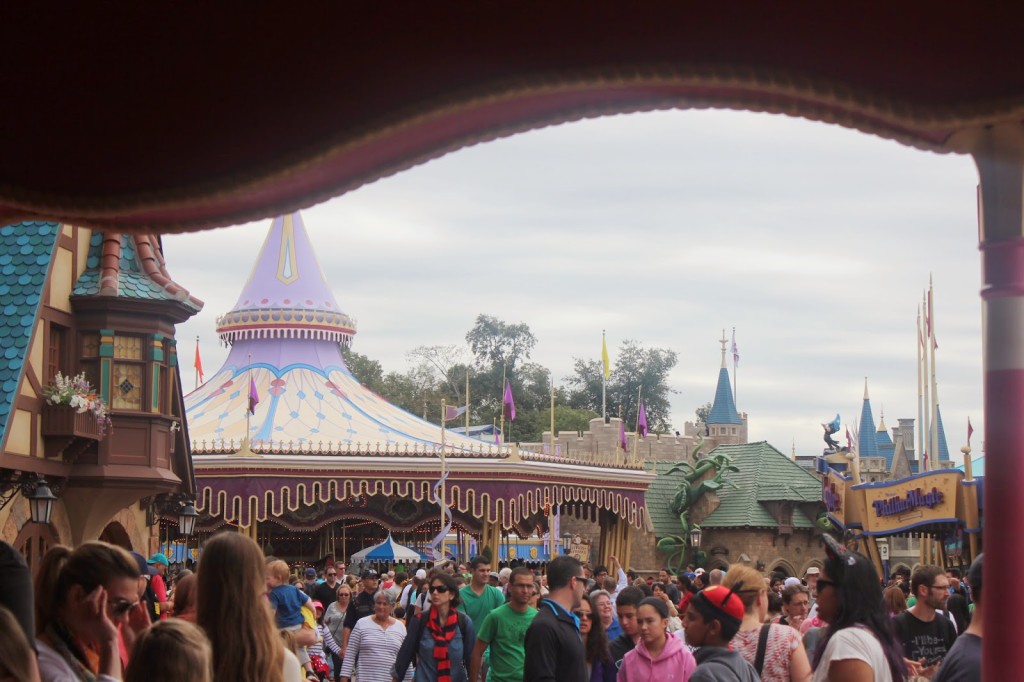 2. Be Flexible. Parks can (and will) close during the holidays. On Christmas day, Magic Kingdom reached it’s capacity at 10AM and begun turning people alway. Only those with prior dinner reservations were let until the parks. It was very unfortunate because some families were on the last day of their vacation and saved Magic Kingdom for Christmas, so being told they couldn’t go in must have been devastating. That’s why it’s always important to have a Plan B. While some families waited to see if Magic Kingdom would re-open later that evening (it didn’t), we decided to just spend Christmas at Epcot. It actually turned out better because we got to experience Christmas Around the World at the World Showcase.
3. Take advantage of the FastPass+ system. 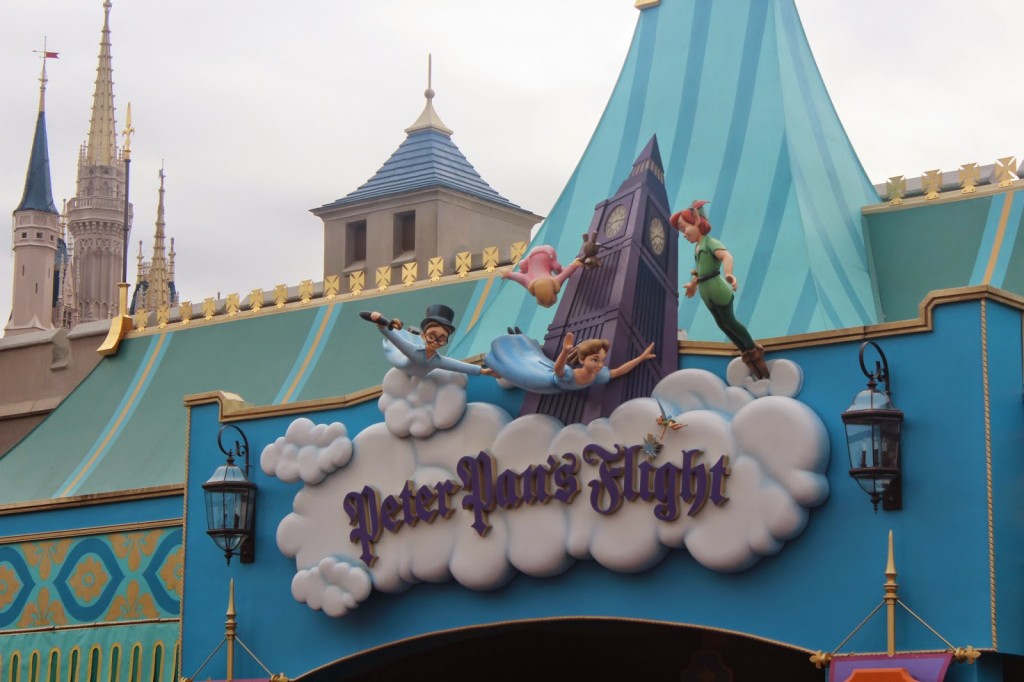 During my week long visit to Disney, the longest I ever waited for a ride (excluding Ecopt’s Soarin’) was 15 minutes! That’s right, only 15 minutes! On average, most rides have a wait time of about 75 minutes but if you use the FastPass+ system to your advantage, you’ll be able to better maximum your time. Unlike other Florida theme parks, Disney’s FastPass+ system is FREE! At each park you get three FastPass+ selections and once you use all three, you can get additional Fastpass+ selections throughout the day. I HIGHLY recommend that you choose Peter Pan’s Flight (Magic Kingdom), Soarin’ (Epcot), Toy Story Midway Mania! (Hollywood Studios) and Kali River Rapids (Animal Kingdom) as one of your three FastPass+ choices for their respective parks because those rides rarely have a wait time of less than an hour and a half.
4. Arrive early to the parks. Like I said in the second tip, parks can close/reach capacity during the holidays. If you want to avoid being turned away at the park gates, make sure to arrive early! Sometimes it’s best to arrive even before the park opens. Although Magic Kingdom opens at 8AM, sometimes it’s best to get there as early as 7:30AM. From the time it takes to park, catch a parking lot tram, take the monorail or ferryboat, it can be a half hour before you even reach the park gates. 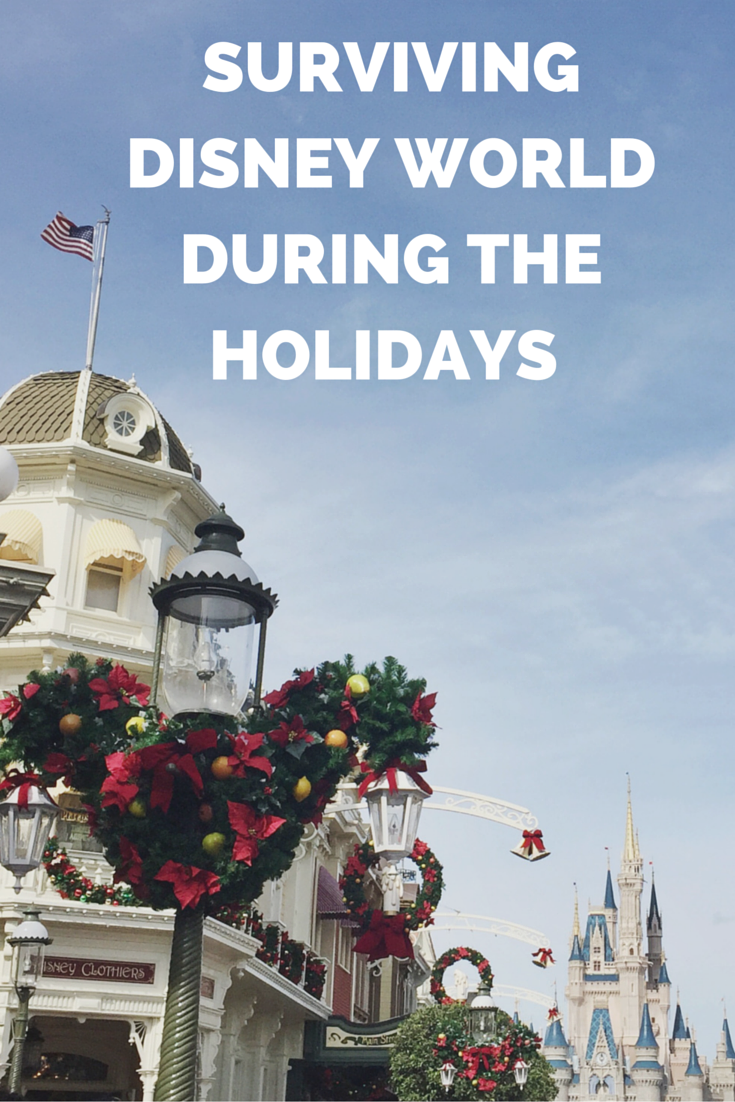 5. Pack for all types of weather. Florida weather can be a little unpredictable so it’s important to pack properly. During our week in Florida we experienced a breezy day where we needed to wear light jackets, a stormy/rainy day and days so hot you needed tank tops and shorts!
6. Bring Snacks. 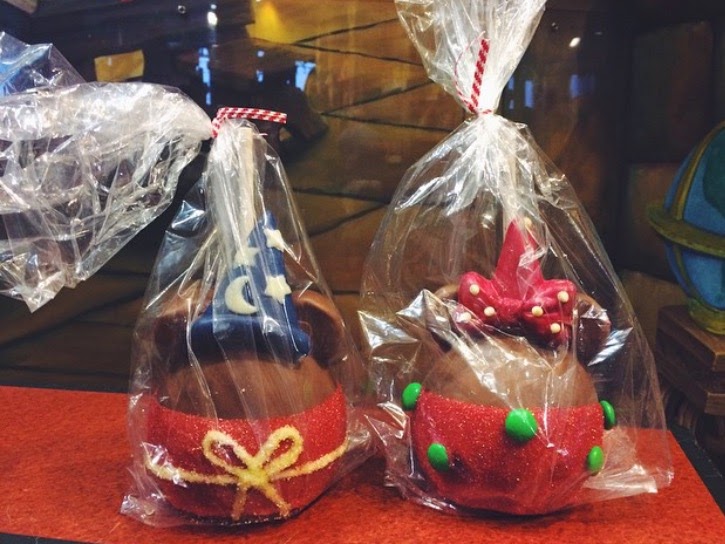 Sure Mickey pretzels and candy apples are delicious but they can get costly. Packing things like water, chips, cookies or even a sandwich can really save you a lot of money while you’re at Disney.
7. Wear comfy shoes. At Disney you’re going to be doing a lot of walking and a lot of standing! Whether you’re standing in line for a ride, the bathroom or for food, you want to make sure your wearing comfy shoes. DO NOT wear new shoes to Disney. It’s best to wear a pair of broken in running shoes, or whatever shoes are most comfortable to you.
8. Take a break from the rides. 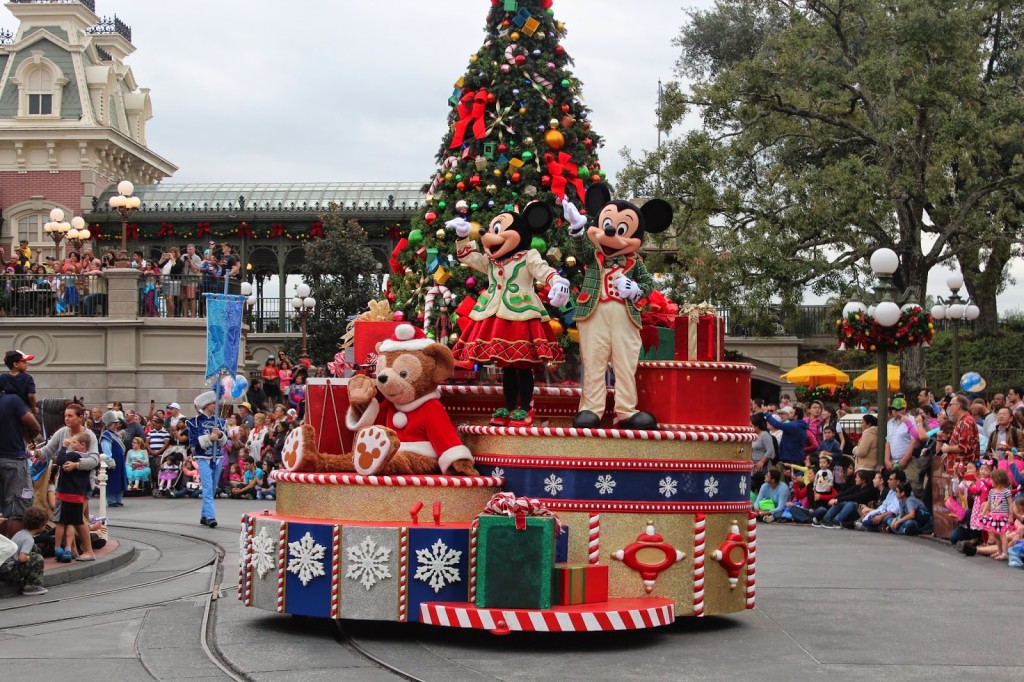 During the holidays there’s so much to see and do! Don’t limit your vacation to ‘just rides.’ There are decorations galore, characters dressed to the nines, light shows, fireworks and parades all day long. It’s important to stop and appreciate the Disney atmosphere.
9. Take a Disney break. Disney requires a lot of walking and waiting so it’s important that you don’t wear yourself out. If you’re going to be on vacation for five days, schedule a rest day in between.
10. HAVE FUN! This one seems obvious but it’s something people often forget to do! It’s okay if you don’t get to ride every ride or see every show. You’re in Disney World, the Happiest Place on Earth, just relax and enjoy yourself.
Bonus Tip: Skip Character Meet and Greets! 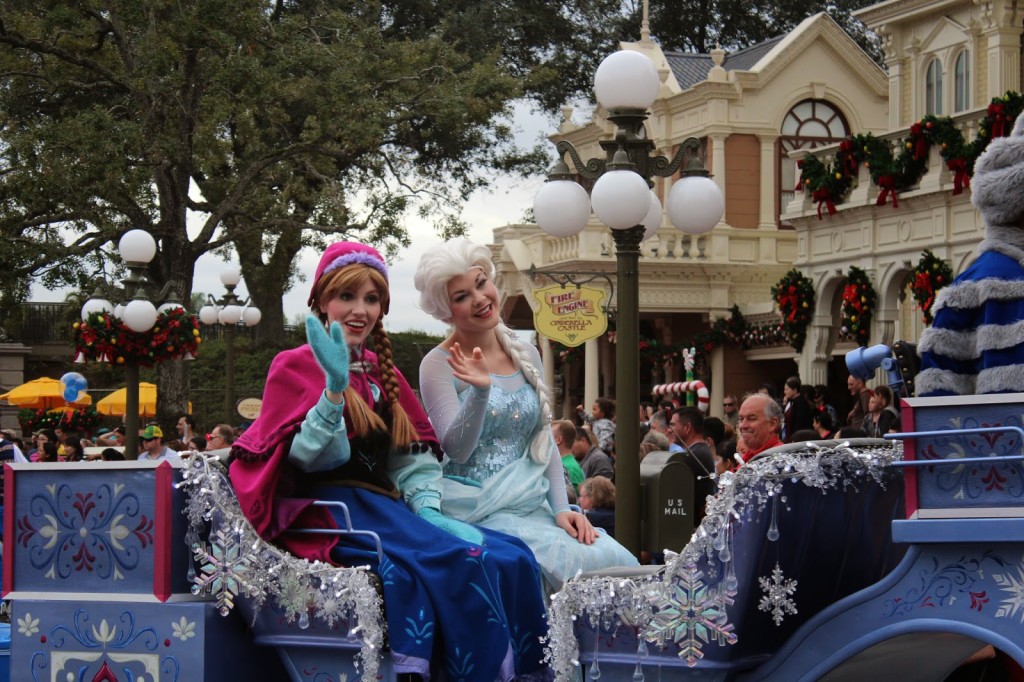 Most Meet and Greet lines are as long as actual rides, ranging anywhere from 30 minutes to almost two hour waits (especially for popular characters like Anna, Elsa and most princesses.) A lot of the time characters walk freely around the park and will stop for pictures (or autographs.) Unless you’re traveling with small children (or someone who really wants to take pictures with certain characters,) my suggestion is to go up to characters as soon as you see them or pick one character/your favorite character and only ‘meet’ them. 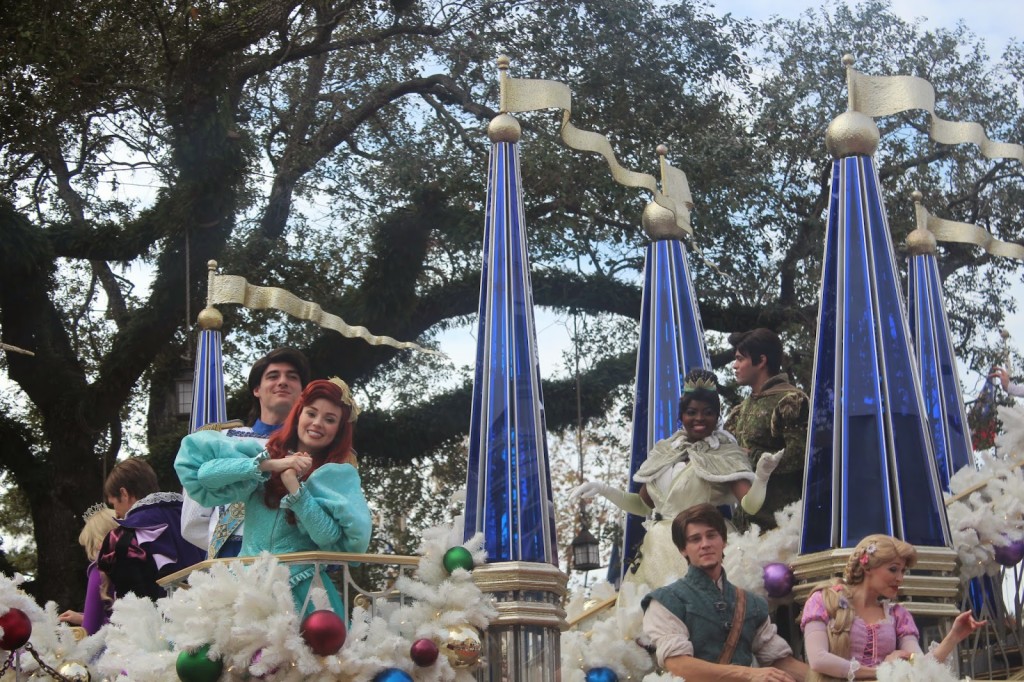 Disney is absolutely breathtaking during the holidays and it’s something I think everyone (especially Disney lovers) should experience!