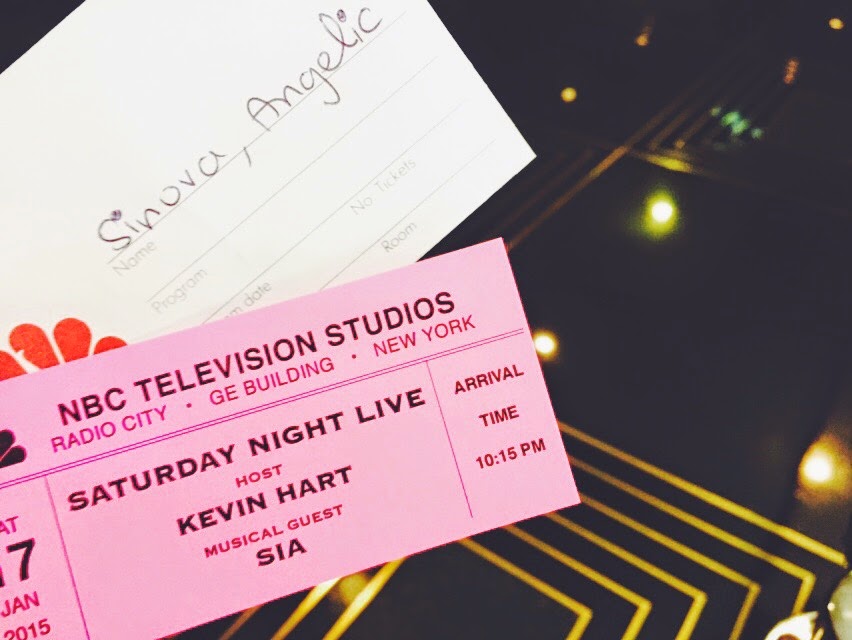 Last Saturday I got to cross off something that’s been on my Bucket List since I was SEVEN years old: see a live taping of Saturday Night Live! It all happened SO FAST! I got the email that I had gotten tickets on Monday (they only give you a weeks notice,) booked my fight on Tuesday and flew to New York City that Saturday morning! Sometimes spontaneous trips are the best trips, right?

Let me just say, I am a HUGE saver. I only spend money when I absolutely have too (my family calls me frugal, but it works to my advantage!) Whenever I get paid, I put certain amounts away in my ‘upcoming trips fund’ and my ’emergency fund’! This was definitely an ’emergency fund’ situation (since my trip fund is for planned trips, not last minute ones.)

Like I said, call me frugal all you want but if I wasn’t, I wouldn’t be able to travel as much or get to take random weekend trips to NYC to see SNL! 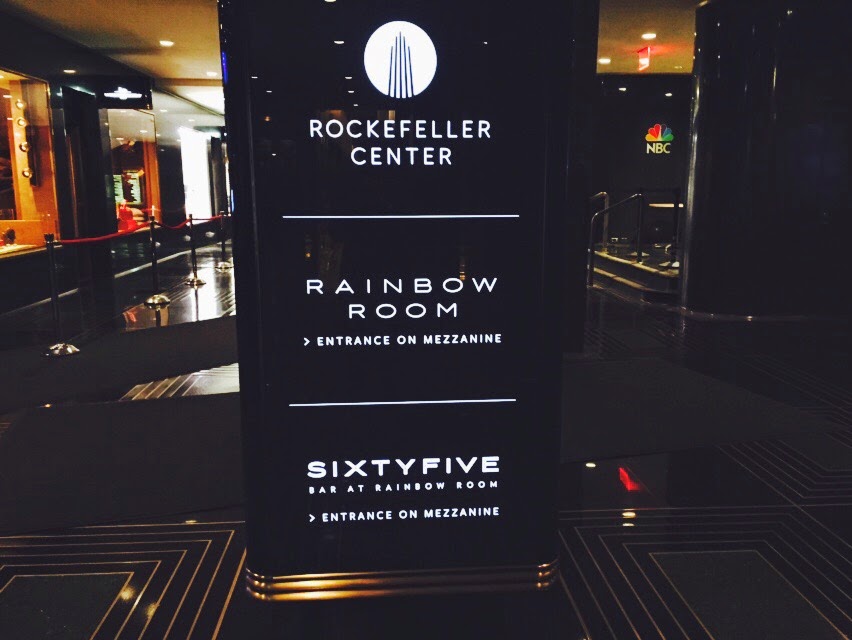 Words can’t describe how incredible it was getting to see the behind the scenes moments and exactly what it takes to put on a live show! You’re told to arrive at Rockefeller Center no later than 10:15 or your tickets will become void. Of course I got there hours in advance because I was so excited! Before you can go through security and actually take the elevators up to the studio, you have to wait behind these velvet ropes until the NBC pages call you up. 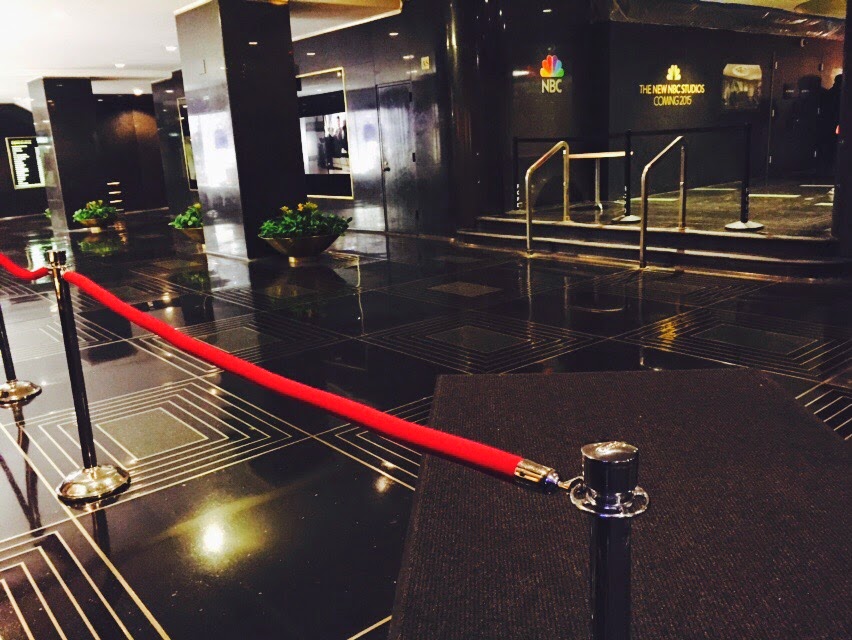 Before the actual show started there was this little pre-show! Weekend Update co-anchor Michael Che came out and told a few (hilarious) jokes and than Kenan Thompson performed a song with backup singers Cecily Strong, Kate McKinnon and Vanessa Bayer! I could even see Kevin Hart walking around as he warmed up.

Once you enter the studio you are NOT allowed to take any photos. In fact, they ask you to turn your cell phones/camera’s completely off. One lady tried to sneak a picture of the cast photo on the wall and a NBC page ran up to her and said “you have to delete that picture immediately. I have to watch you delete it from your phone or you will be asked to leave the studio.” Yup, that’s how serious it was! With that being said, the following photos belong to Dana Edelson/NBC! 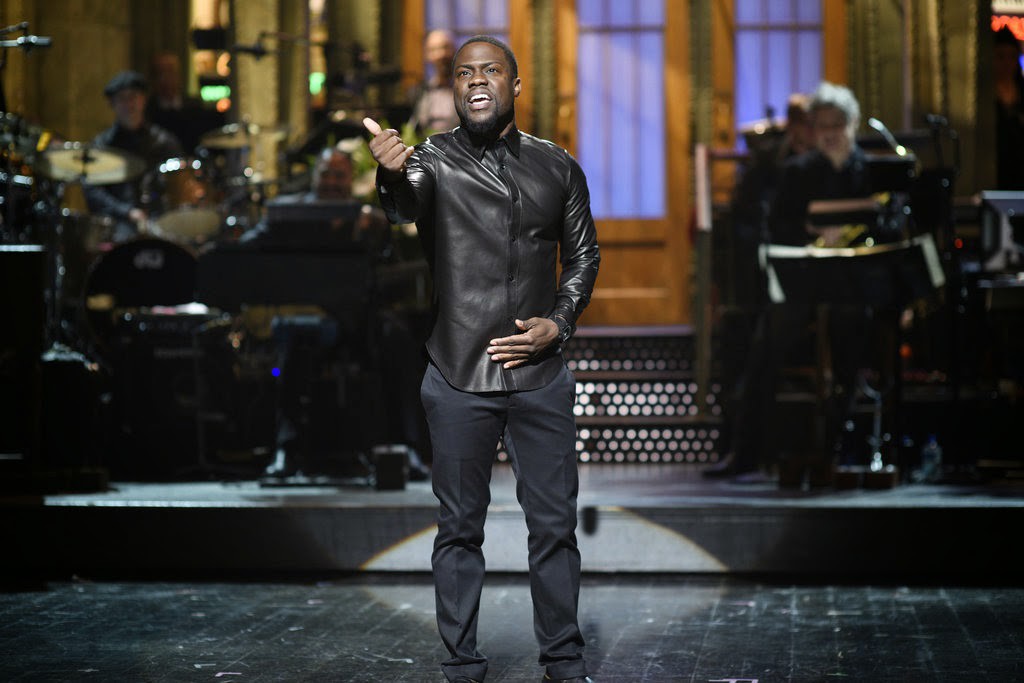 Kevin Hart was absolutely hilarious in his opening monologue! I love when comedies host SNL because it’s almost like you’re watching stand up the whole time. 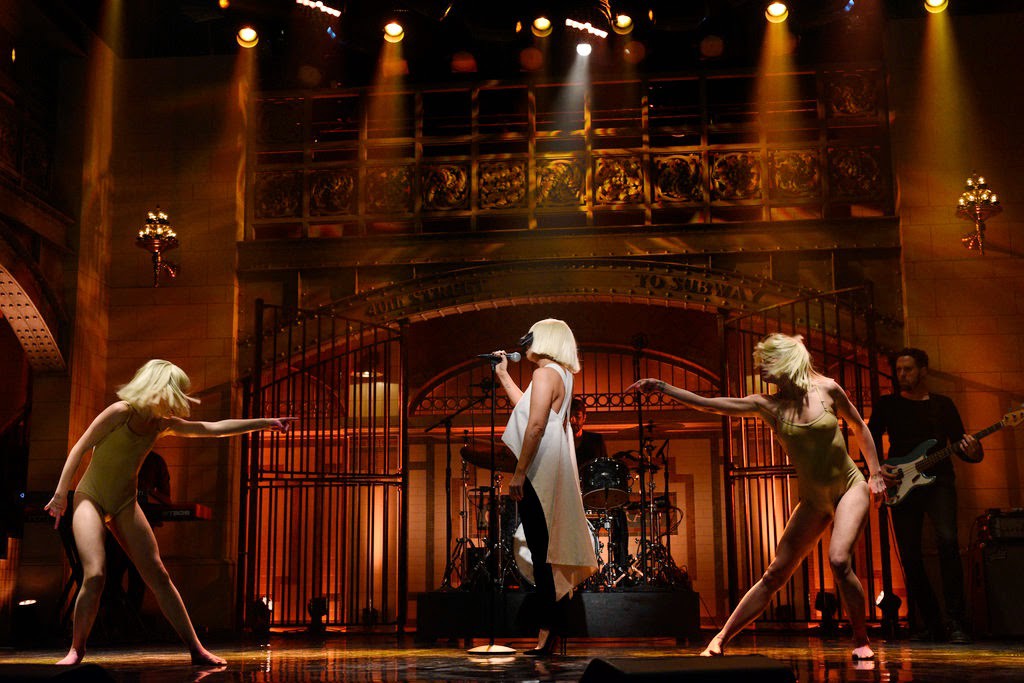 Sia’s Elastic Heart performance was AMAZING! I’ve been a HUGE Sia fan since 2006 so seeing her live was definitely the highlight of the entire show. She sings with such passion! 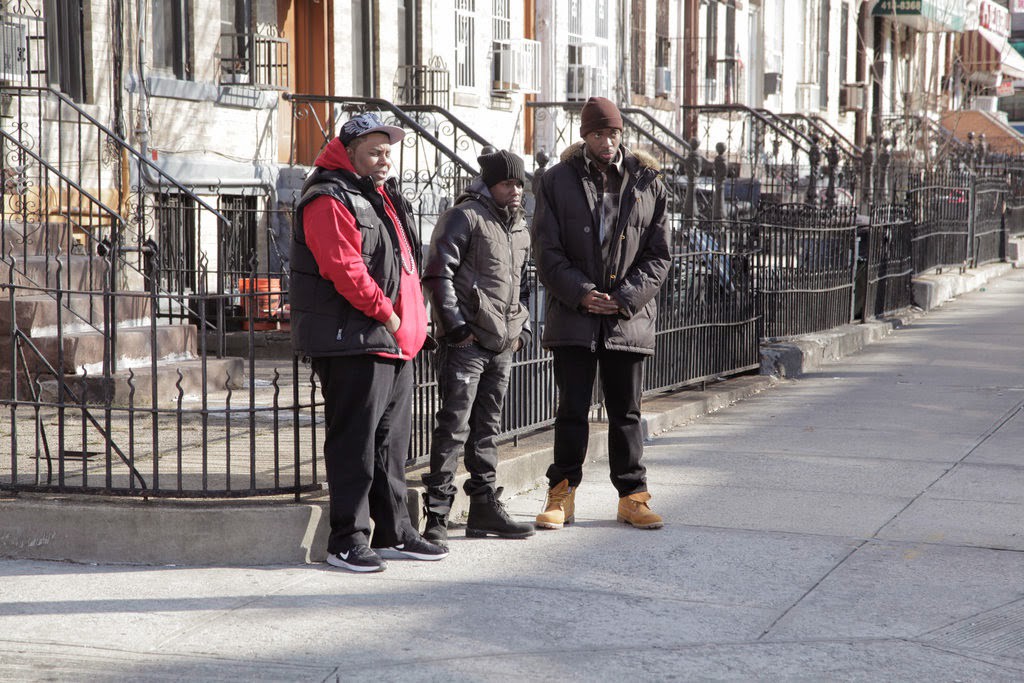 For pre-taped skits or digital shorts, there are screens throughout the studio where the audience can look and see the show exactly as it’s being seen on TV. In fact, seeing the show live is exactly like watching it on TV expect we in the audience don’t get to see commercials. Instead we see sets being moved and built at record speed (it’s amazing how fast they get things done!) 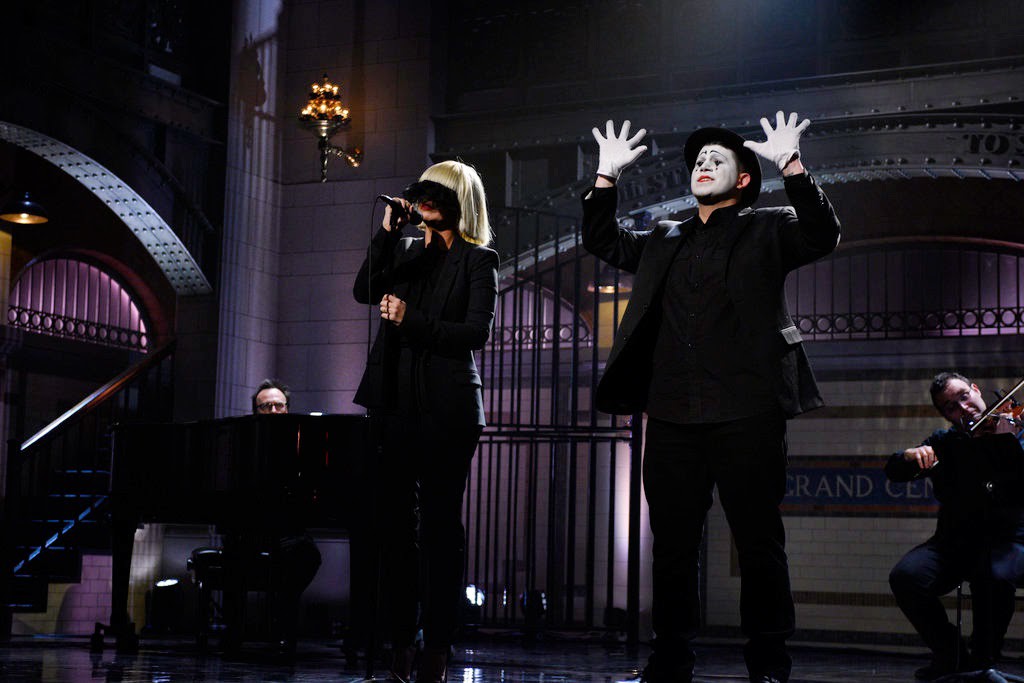 Before Sia went on stage to sing Chandelier, I noticed Maddie Ziegler wasn’t with her. I was a little bummed because I really wanted to see Maddie perform the Chandelier dance live but as soon as I saw the Mime join her on stage, I knew this performance was going to be amazing! All I can say is WOW. Sia is an incredible performer and I think everyone should have the pleasure of getting to hear her live! I actually went back and watched this performance on Youtube and I’ve got to say, it sounded even better (if that’s possible) live! 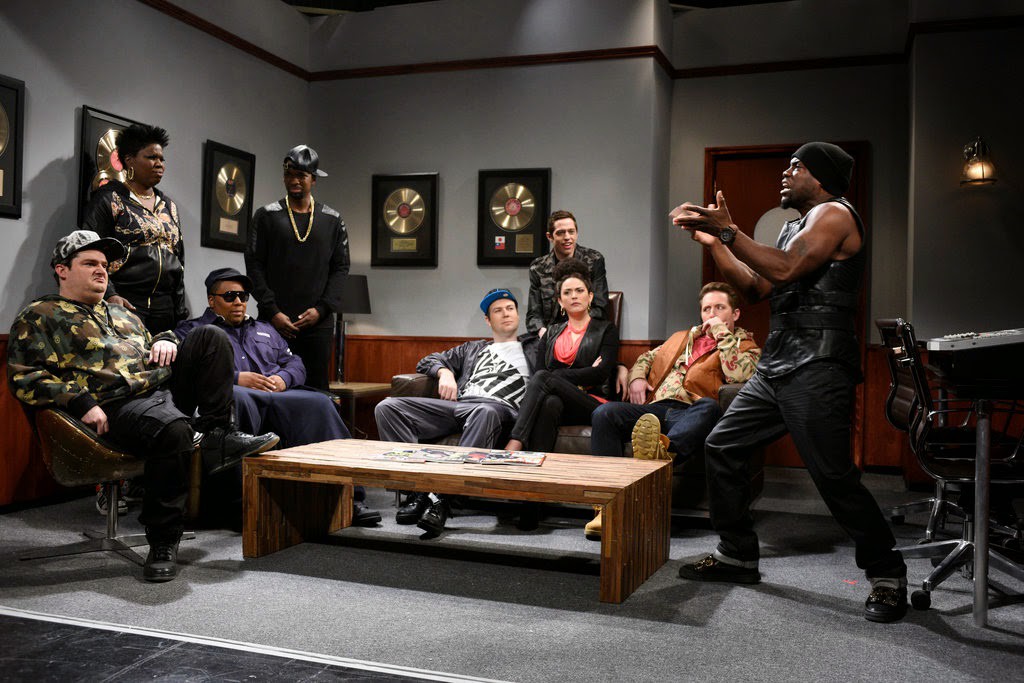 This was the last sketch of the night and it didn’t disappoint. Kevin Hart was just giving his ALL in this sketch. You could even see some of the cast members cracking smiles and breaking character from the audience.

I really wish you could take pictures in the studio (the entire building is copy righted, therefore anyone caught taking pictures will be sued and banned) because it was AMAZING! The walls were filled with dozens of casts pictures and photos of classic and new sketches. There were iconic costumes all throughout the building like Mary Katherine Gallagher’s (Molly Shannon) school girl outfit and The Coneheads PJ’s. There were autographed photo’s of former cast members and all types of famous SNL props laying around! After the show ended, Lorne Michaels came out to hug Kevin Hart and the cast. I definitely got starstruck because Lorne Michaels basically IS SNL! The whole experience was just amazing and I’m definitely going to try to go again next season!