Happy Monday Everyone! I’m kicking off the first Monday’s Music of 2015 by continuing my ‘favorite songs of each decade” playlists. Up this week: the 1990’s! Since I was born in the early 90’s (’92 to be exact,) most of the songs on this playlist represent the songs I most associate with my childhood/growing up. I originally wanted this weeks playlist to be ‘Golden Globes’ themed but since most of my favorite Golden Globe winning songs are from Disney movies (and that’s a playlist for a different time) I decided to just include a few of my favorite highlights from last nights awards! 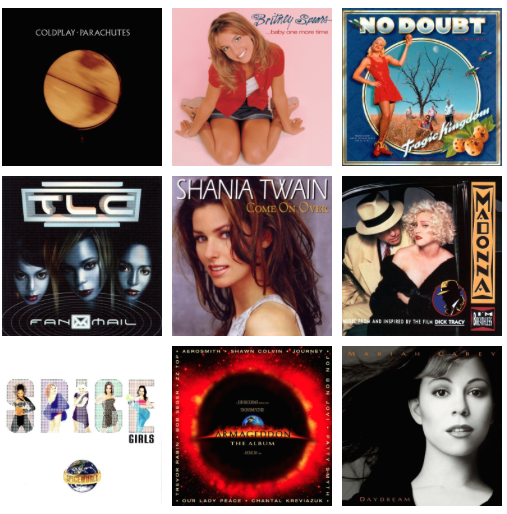 Coldplay is my all-time favorite band and I instantly fell in love with them the first time I heard their album Parachutes. Though it wasn’t until I heard (and fell in love with) Sparks that I truly considered them my favorite band! I think any 90’s kid would be lying if they didn’t include…Baby One More Time on a favorite 90’s songs playlist! I distinctly remember buying this cassette (remember cassettes?!) and playing it EVERY NIGHT before I went to bed! I’ve always been Madonna and Aerosmith fans, so of all the songs they released in the 90’s, I Don’t Want to Miss a Thing and Vogue, will always be my most played! While I can’t deny the catchiness of Wannabe, my favorite Spice Girls song is and will always be Stop! I love how each member basically has her own little verse! Some of you may not know this, but I’m a HUGE Shania Twain fan (like HUGE!) I own ALL of her albums (and basically know the lyrics to all her songs.) You’re Still The One is one of my favorite Shania songs (and I still listen to it til this day!)

• The Grand Budapest Hotel. It’s no secret that Wes Anderson is my FAVORITE screenwriter and director so I was super happy that The Grand Budapest Hotel took home the Golden Globe for Best Motion Picture, Musical or Comedy (even though a lot of people are mad about its win over Birdman.)
• Birdman or (The Unexpected Virtue of Ignorance). Along with The Grand Budapest Hotel, Birdman was one of the best films I saw in 2014. Michael Keaton (Best Actor in a Motion Picture, Musical or Comedy,) Alejando González Iñárritu, Nicolás Giacobone, Alexander Dinelaris and Armando Bo (Best Screenplay, Motion Picture) definitely deserve their wins!
• Boyhood. In a time of superhero/action packed blockbusters, movie remakes and predicable romantic comedies, it was great to have had such an original film like Boyhood hit the big screen!

• Eddie Redmayne, The Theory of Everything. I’ve been in love with Eddie Redmayne for years now (how adorable is he) so I’m excited for his Golden Globe win! His performance as Stephen Hawking was AMAZING!
• Jeffrey Tambor, Transparent. Like Boyhood, Transparent is amazing because of its originality! If you haven’t watched this show yet, GET ON IT!
• Amy Adams, Big Eyes. I’ve said this a million times, Amy Adams is one of the most diverse actresses out today! Her roles are always so different and yet she fits them all beautifully! Big Eyes was such a great film and I’m glad it’s getting the recognition it deserves!

What’s your favorite 90’s song? Did you tune into the Golden Globes last night, what were your thoughts?
*Be sure to check out other Monday’s Music playlists HERE*
84 Replies