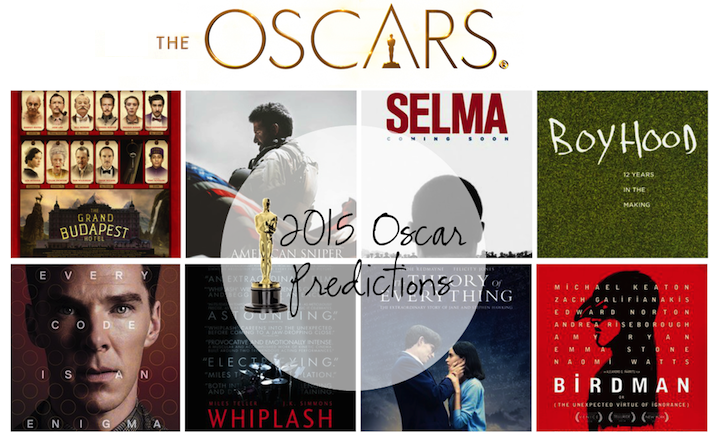 Next to Christmas and my birthday, Oscar night is one of my FAVORITE days of the year! Every year I make it my personal goal to see ALL the Oscar nominated films BEFORE the Oscars (and before they even get nominated!) I love seeing dozens of movies throughout the year and guessing which films the Academy will recognize (I’m usually 95% right!) I’m happy to say that this year marks the SEVENTH straight year that I’ve completed my goal of seeing every Oscar nominated film (if you can’t already tell, I’m a huge film buff!) Although last year I correctly predicated EVERY major Oscar win, I’m not sure that will happen again. This year has some pretty stiff competition and for the first time in years, I think I might actually be surprised by who takes home a golden statue! Here are my predictions for the 87th Academy Awards: 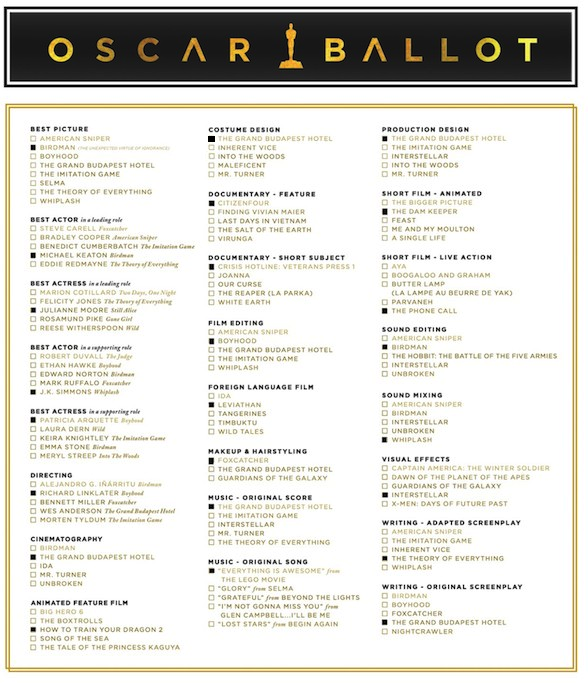 Best Picture: Birdman or (The Unexpected Virtue of Ignorance.) It’s no secret that Wes Anderson is my FAVORITE screenwriter and director and while The Grand Budapest Hotel was some of his finest work, this years Best Picture race is definitely going to be a battle between Boyhood and Birdman. I know there’s been some backlash recently about Boyhood being “boring” or “lacking a storyline” but you have to admit the concept itself was amazing. With that being said, Birdman was without a doubt the BEST film I saw in 2014 and getting to see Michael Keaton and Edward Norton at last year’s Birdman Comic Con Panel was one of the highlights of my 2014.

Best Director: Richard Linklater. I don’t think Boyhood should win Best Picture (although there’s a huge chance it will) but I do think Richard Linklater should be awarded for the amazing job he did directing this film! Since Wes Anderson is my favorite director, I’d obviously love for him to win. I also think Birdman director Alejandro G. Iñárritu should deserve to win too (everyone who is nominated is amazing!)

Best Actor/Actress: I LOVE all five of the nominees for Best Actor (and would be happy with whatever the outcome is!) Personally I think Michael Keaton was BRILLIANT in Birdman but there’s a part of me that feels like Bradley Cooper might win. This is his third year in a row being nominated and that alone speaks volumes! Then again, I wouldn’t count Eddie Redmayne out either! When it comes to Best Actress, I’d be very surprised if Julianne Moore didn’t win.

Best Supporting Actor/Actress: I could easily make a case for any one of the nominated actors to win but I’m almost certain that J.K. Simmons and Patricia Arquette will be the ones who win Oscars Sunday night!

*Check out my 2014 Oscar Predictions (I correctly predicted EVERY major award!)
*Printable Oscar Ballot available via Sugar and Charm
103 Replies