Happy Monday everyone! This week’s ‘Monday’s Music‘ is dedicated to all those lovely musicians who are generally known for only one hit single. That’s right, the one-hit wonders! Obviously, some of these artists have gone on to make more music, but for the most part, they’ve only had one hit single or are known for one signature song that’s overshadowed their other work. Like always, for this list I will not be including any songs that have been previously included in a Monday’s Music playlist (even if they are one of my favorite one-hit wonders!) 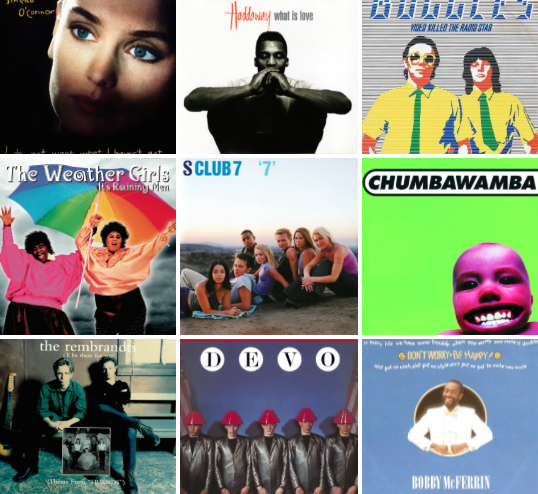 • Video Killed the Radio Star. My senior year of college (I can’t believe it’s been almost a year since I graduated) in my Mass Communications class we were learning about the birth of MTV and the music video, so of course we watched Video Killed the Radio Star. After watching it, a girl whispered “they stole the opening from Nicki Minaj’s Check it Out.” I was so disappointed in humanity that day!

• It’s Raining Men. I have this song (and its 1997 remake) to thank for introducing me to the FABULOUS RuPaul (yes, I’ve been a Ru fan since I was five years old!)

• Never Had A Dream Come True. I LOVE S Club 7! I own all their albums, know the lyrics to every one of their songs and I was so mad when their TV show got cancelled! Even though they’re popular in other countries, it’s so sad they never caught on here!

• I’ll Be There for You. How could I not include the theme song to my favorite show of all time?!

• Don’t Worry Be Happy. I can’t listen to this song and NOT smile! What a great motto to live by. Once I decided to be happy and always think positive and see the silver lining, my life changed dramatically!