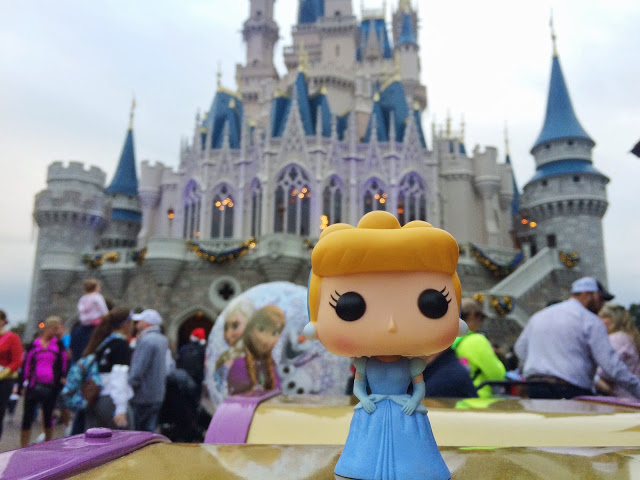 This Friday I’m heading to DISNEYLAND for the 60th Anniversary Diamond Celebration! I’m so EXCITED because if you couldn’t already tell, Disney is my LIFE and it has been ever since I was a kid! I have so many fond memories of going to Disney World (basically every year) as a kid and getting to meet Mickey and Minnie. Disney was such a huge part of my childhood and I’m so happy it’s still such a huge part of my adult life! Not only am I going to Disneyland this week, while I’m there I’ll be getting a Disney Premier Passport (which is an annual pass to both Disneyland AND Disney World!) Since I’ll have free admission to both parks for one year, I plan to visit Disney at least once every other month (yes, I’m that serious about my Disney love affair!) To celebrate my upcoming Disneyland trip, I’ve decided to do a ‘Disney Tag.’ Some of these questions I found on Tumblr but most of them I just made up! (Side note: I LOVE this picture I took of my Cinderella Funko in front of Cinderella’s castle at Disney World last Christmas! It was hard to get a great shot since it was so crowded but I’m happy with how it turned out!)
1. Favorite Disney movie? Beauty and the Beast!
2. The first Disney movie you remember seeing in theaters? Pocahontas. Even though I was only three at the time, I VIVDLY remember bringing a Meeko stuffed animal with me to see this film!
3.  Favorite Disney song? This is IMPOSSIBLE to answer! Although, I’m currently doing a countdown of my favorite Disney songs for Monday’s Music.
4. Favorite Disney princess? Belle!
5. Favorite Disney prince? Aladdin (but I LOVE Flynn Rider too!)
6. A scene/moment in any Disney movie that never fails to make you cry? The scene in Mulan where she goes to bow to the Emperor of China but instead he bows to her and then the WHOLE crowd bows. I BALL my eyes out EVERY TIME!
7. Favorite Pixar movie? A Bug’s Life.
8. Favorite Disney villain? This is SUPER hard because the villains are actually my favorite parts of Disney films but if I had to narrow it down, Ursula, Cruella De Vil, Scar and Jafar would be tied!
9. Favorite Disney sidekick? Lumière and Mushu!
10. Disneyland or Disney World? I really hate when people get into arguments about this because BOTH are AMAZING and MAGICAL (and both should be experienced) but I grew up at Disney World so it will always have a special place in my heart!
11. Favorite ride at the Disney Parks? Pirates of the Caribbean (but I love ALL the rides!)
12. Favorite ‘land’ in the parks? Fantasyland and the World Showcase in Epcot!
13. Favorite underrated Disney movie? Oliver and Company.
14. Do you collect anything Disney? As of now, I collect: Disney Vinylmation’s, mugs, snow globes, stuffed animals, Tsum Tsum’s and of course, Disney Pins!
15. Favorite live action Disney movie? Enchanted (fun fact: my ‘Sweet 16’ was an Enchanted themed party) and Mary Poppins!
16. Favorite Walt Disney quote? “If you can dream it, you can do it.”
17. Favorite ‘Fab Five’ member? A tie between Mickey and Goofy.
18. Favorite (non-princess) Disney character? Stitch and Chip & Dale.
19. Favorite recent (released between 2010-2015) Disney movie? Wreck-It Ralph!
20. Favorite Disney memory? The first time I walked down Main Street U.S.A at Disney World as a little girl!
If you’re a fellow Disney fan, make sure to leave your answers to one (or more) of these questions in the comment box below!
124 Replies