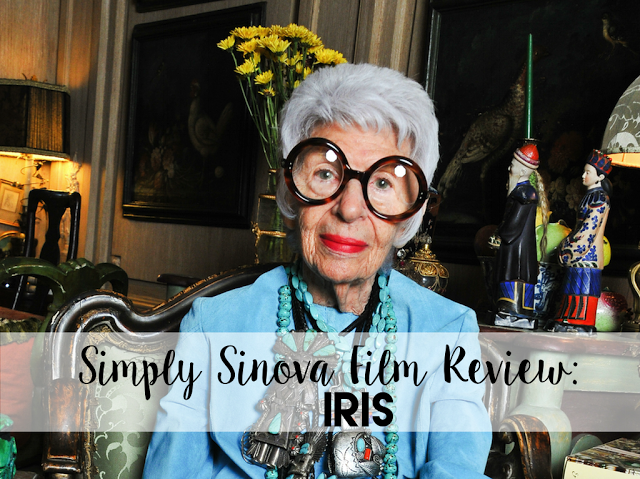 / 5 [I prefer bouquets to stars]
Iris, 1 hr. 23 min
Genre: Documentary
Staring: Iris Apfel and Carl Apfel
Looking for something inspirational, fun, hilarious AND heartwarming? Look no further than Iris, a documentary about interior design legend and fashion icon Iris Apfel! This is more than just a mere “fashion film”, this documentary is a story about creativity and the importance of being yourself. I highly recommend this film for everyone! Regardless if you want to get into the fashion industry or not, the message behind Iris is universal: Be yourself because everyone else is taken!

Favorite Character: Iris Apfel (obviously.) For a 90 year old, Iris has one of the most upbeat personalities I’ve ever seen. She knows exactly who she is and what she loves and that in itself, is truly inspirational. I saw a lot of myself in Iris. From a young age, I’ve been very fortunate to know exactly who I am and what I love. A lot of people aren’t lucky enough to truly ‘know’ themselves. People struggle for years to find their true identity. I know so many people who ‘hide’ themselves (especially certain things that interest them) for fear of being judged. I’m PROUD to say that I’m 23 years old and LOVE Disney and collecting toys. I’m 23 years old and the fact that I’m going to Disneyland next week is the highlight of my month. I’m 23 and proud to say that I love watching ‘kid’ shows and dressing in whatever clothes I have laying around. I don’t feel the need to follow or keep up with trends. I’m 23 and my perfect night isn’t going out drinking, it’s chilling at home with my heated blanket watching a Wes Anderson film and listening to some vinyls. In the same sense, Iris is 90 years old and proud to collect different knick knacks and jewelry pieces from across the globe. She doesn’t care if it’s Chanel or from a flea market. If she likes it, she gets it and that’s something more people should do!

Favorite Scene: During Fashion Week, Iris runs into a flirty Kanye West backstage and it was so hilarious (the whole audience was cracking up.) It only lasted a few seconds but it was fun getting to see Kanye smile and be so nice to Iris.

Favorite Quote: This film was chock-full of AMAZING and inspirational quotes by Miss Iris Apfel! Some of my favorites included: – “It’s Better to Be Happy Than Well-Dressed.”

– “I’m not pretty and I’ll never be pretty but it doesn’t matter. I have something much better. I have style.”

– Downtown they think they’re stylish, but all they wear is black. That’s not really style. That’s a uniform.”

– “I don’t have any rules, because I’d only be breaking them.”