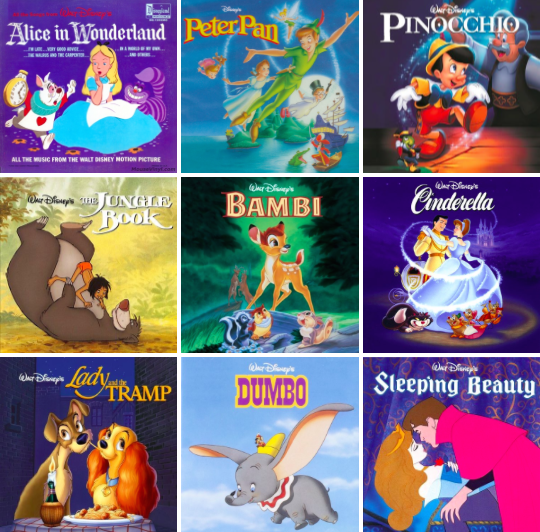 For reference, this list refers to any Disney film made within the Gold, Wartime and Silver era (i.e 1938 – 1967.) Meaning this list could include any of the following films: Snow White, Pinocchio, Fantasia, Dumbo, Bambi, Saludos Amigos, The Three Caballeros, Make Mine Music, Fun and Fancy Free, Melody Time, The Adventures of Icabod and Mr. Toad, Cinderella, Alice in Wonderland, Peter Pan, Lady and the Tramp, Sleeping Beauty, One Hundred and One Dalmatians, The Sword in the Stone and The Jungle Book. Now time for a few fun facts:

• In a World of My Own. Alice in Wonderland is my second favorite Disney movie (Beauty and the Beast is my all-time favorite) and this song is a huge reason why I love this film so much. As a kid (maybe 3 or 4 years old) I would watch this movie every day, even though I didn’t understand the plot, just to hear this song over and over again!

• Second Star to the Right. After Alice in Wonderland, Peter Pan is my favorite ‘classic’ (pre-1970’s) Disney movie and this is one of my top 5 favorite Disney songs! It’s just such a pretty song. I get chills every time I hear it!

• When You Wish Upon a Star. I cry EVERY TIME I hear this song, especially if it’s playing in the parks (Disney Parks) or during fireworks! It’s such a powerful song. I think a lot of people miss the message of this song. It isn’t saying you should just sit around and wish for something and pray it comes true. For me, this song is about never giving up hope! Always keep wishing and always believe that your dreams can come true!

• Little April Shower. I have a confession: I’m NOT a huge Bambi fan (don’t hate me) BUT I LOVE this song! I was born in April (and I also love rain) so I always thought this song was really cute!

• Baby Mine. Okay, this scene in Dumbo?! Seriously one of the SADDEST scenes in Disney history! Dumbo in general is a really sad movie (especially scenes with Dumbo’s mom) and this song gets me every time! INSTANT TEARS!

• Once Upon a Dream. I have another confession: I’m not a huge Sleeping Beauty fan (but I ironically love Maleficent.) When I was six years old, I would dance around the living room with a giant stuffed bear and reenact this scene (probably the only scene I could stand watching without getting bored!)

What’s your favorite Disney Golden Age song?
*Be sure to check out other Monday’s Music playlists HERE*
115 Replies