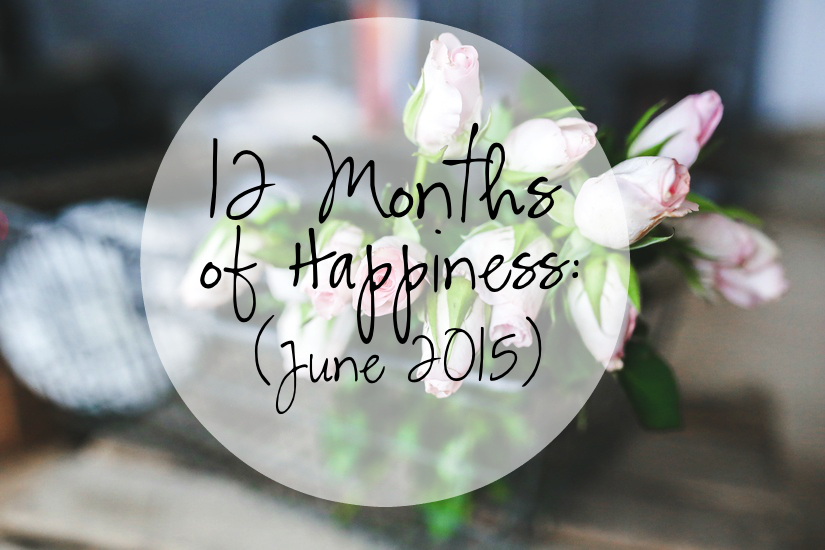 Can you believe today’s the LAST day of June?! It seems like yesterday I was at Disney World ringing in the New Year and now here we are and 2015 is HALFWAY OVER! So far 2015 has been amazing! I’ll even go as far as saying it’s been the best year of my life (so far!) I think a big reason 2015 has been so amazing for me is because of my happy demeanor and optimistic way of thinking! With that being said, welcome to the sixth (wow, this series is halfway over) installment of my 12 Months of Happiness series! Here are some of the things that made me happy in June: (Don’t forget to comment down below how your June went and what things made you smile this month! I LOVE hearing from you all about what makes you happy!)

My puppy Loki NEVER ceases to put a smile on my face. For such a tiny dog, he’s got a BIG personality (and voice. Seriously his barks can be heard a mile away!) Adopting Loki was without a doubt the best decision I’ve ever made. I seriously can’t imagine life without him!

If you’re a regular here at Simply Sinova then you already know about my Disney obsession (even if you’re not a regular, one glance at this blog is all you need to realize how crazy I am about Disney,) so obviously Disney makes me happy every (day) month! This month was a particularly good Disney month though! Since I’m a Disney Premier Passport holder, I get certain perks! One perk being a magic band for Disney World trips (my next trip is in August, woot woot) and an adorable Premier Passport magnet! Although the best perk of being a Disney annual passholder is the amazing DISCOUNTS at the parks!

I’ve been wanting a Wii U for about two years now so this month I finally bit the bullet and bought one (Treat Yo Self, am I right?) I LOVE my Wii U! I’ve always been a HUGE Mario/Nintendo fan so the Wii has always been my preferred gaming system. Although I love playing games (Mario Kart 8 ROCKS,) my favorite thing about the Wii U is that I get to watch Netflix and Youtube from my TV! I was able to watch the third season of Orange Is The New Black (is it just me or was this season super boring compared to the first two) right on my TV instead of my tiny computer screen!

June started out AMAZING since I had the incredible opportunity to attend the Inside Out screening on June 1st! I really loved the film but it was the film’s director Pete Docter (who also worked on Toy Story, Toy Story 2, Monsters Inc, WALL-E & Up) and producer Jonas Rivera’s (who’s also worked on several Pixar films) special Q&A after the screening that really made the evening special! Getting to hear from Pixar legends was amazing (especially since working for Pixar would be a dream come true!)

Here’s a few other things that made me happy in June:
I can’t believe tomorrow is July?! What made you happy in June?
Make sure to check out the entire ‘12 Months Of Happiness‘ series HERE!
134 Replies