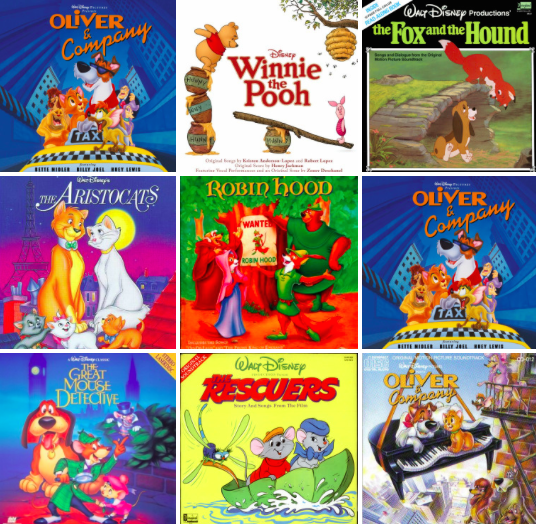 For reference, this list refers to any Disney film made within the Pre-Renaissance era (i.e 1970-1988.) Meaning, this list could include any of the following films: The Aristocats, Robin Hood, Pete’s Dragon, The Many Adventures of Winnie the Pooh, The Rescuers, The Fox and the Hound, The Black Cauldron, The Great Mouse Detective, The Brave Little Toaster and Oliver and Company. Now time for a few fun facts:

•  Why Should I Worry, Once Upon a Time in New York City & Good Company. As you can clearly see, I LOVE Olive & Company. It’s definitely one of my favorite “underrated” Disney films (it’s crazy, I know SO MANY people, including hardcore Disney fans, who have never seen this film?!)

• Heffalumps And Woozles. When I was eight years old I wanted nothing more than to dress up as a Heffalump or Woozle for Halloween but since they didn’t sell costumes of them, I went as my favorite character (at the time) Pikachu!
• World’s Greatest Criminal Mind. This song is definitely in my top 5 favorite Disney villain songs (my FAVORITE will forever be Scar’s Be Prepared!)
• Someone’s Waiting for You. I VIDLY remember watching The Rescuers for the first time when I was four years old and thinking this was the saddest song in the world!

• Ev’rybody Wants to Be a Cat. I have NEVER been a cat person, in fact, I’d go as far as saying I hate cats (dogs all the way) but I can’t lie, Marie, Berlioz and Toulous are some of the CUTEST Disney characters ever!