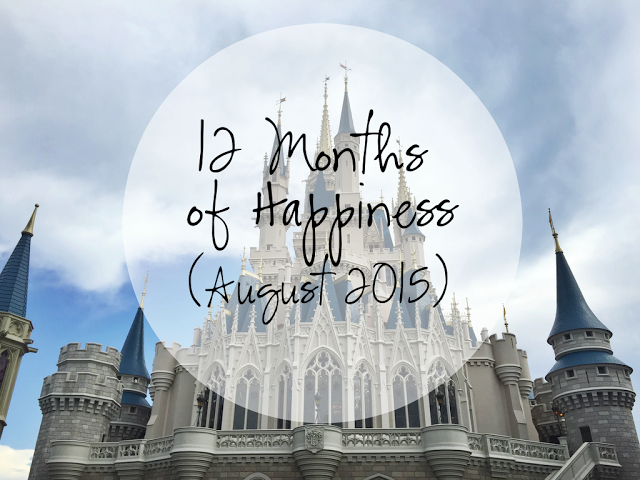 Happy Monday! Can you believe today’s the LAST day of August?! Seriously, 2015 is flying by (not that that’s a bad thing!) I am so HAPPY to be spending the last day of August here at my second home/Disney World! Seriously, Disney is my LIFE! Being at the Disney Parks just makes me so happy that I can’t even describe the feeling. As I’ve gotten older, I’ve come to realize that if something makes you happy, DO IT! Visiting Disney definitely makes me happy so in May I bought a Disney Premier Passport (aka an annual pass to BOTH Disneyland and Disney World) and now I have a Disney trip planned EVERY MONTH (expect for March) until May 2016 (that’s a lot of Disney!) Enough of the Disney talk though (seriously, I could talk about Disney forever) here are some of the things that made me happy in August: (Don’t forget to comment down below how your August went and what things made you smile this month! I LOVE hearing from you all about what makes you happy!)

I had an absolute BLAST at Lollapalooza this year! I got to see Tove Lo, Sam Smith, Of Monsters and Men, Alabama Shakes, Paul McCartney and Florence + the Machine to name a few! Make sure to check out my entire Lolla 2015 recap HERE!

This month I took two amazing trips, starting with Washington DC. This was my fourth time visiting DC and I think this might have been my favorite visit so far! I went for my best friends (who lives in DC) birthday and got to hang out with my two best friends from college (which is always fun!) I also got to visit a bunch of fun places like the Newseum, which I’ve been wanting to check out for YEARS (stay tuned for the full post soon!)

Oh Broadway, how I love you so! One of my New Years resolutions for 2015 was to see at least one Broadway show per month and I’m happy to say that as of August, I’ve done exactly that! That’s right, for the last eight months I’ve seen at least one show (with the max being three shows in one month) each month! This month I had the pleasure of seeing Pippin and Dirty Dancing (both of which were AMAZING!)

Here’s a few other things that made me happy in August:
I can’t believe tomorrow is September?! What made you happy in August?
Make sure to check out the entire ‘12 Months Of Happiness‘ series HERE!