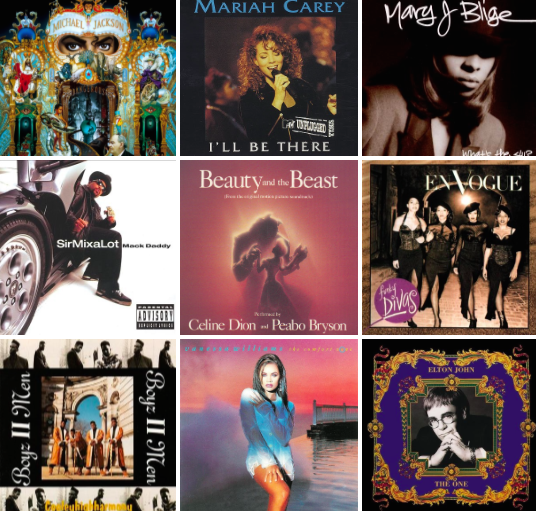 Just a quick note: some of these songs were released in late 1991 but since they achieved critical success in 1992, they were included. Also, I LOVE that so many soulful R&B songs dominated my birth year! Now time for a few fun facts:

• I’ll Be There. Back in the day (late nineties) I was a HUGE Mariah Carey fan! I used to say if I could have any signing voice in history, I’d pick hers.

• Real Love. Even though this song was released a few months after I was born, for some reason I vividly remember listening to this song all the time when I was four.

• Baby Got Back. I CAN’T hear this song without thinking of the ninth season of Friends (aka my FAVORITE show) when Ross and Rachel tried to make Emma laugh by singing this song!
• Beauty and the Beast. Beauty and the Beast will FOREVER be my favorite movie of all time. It’s kind of fitting that this song reached critical successful during my birth year.

• Giving Him Something He Can Feel. I have an entire Pandora station based off of this song (and En Vogue.) In fact, it’s one of my favorite stations to listen to while I’m working!
What’s your favorite song from 1992?
*Be sure to check out other Monday’s Music playlists HERE*
34 Replies