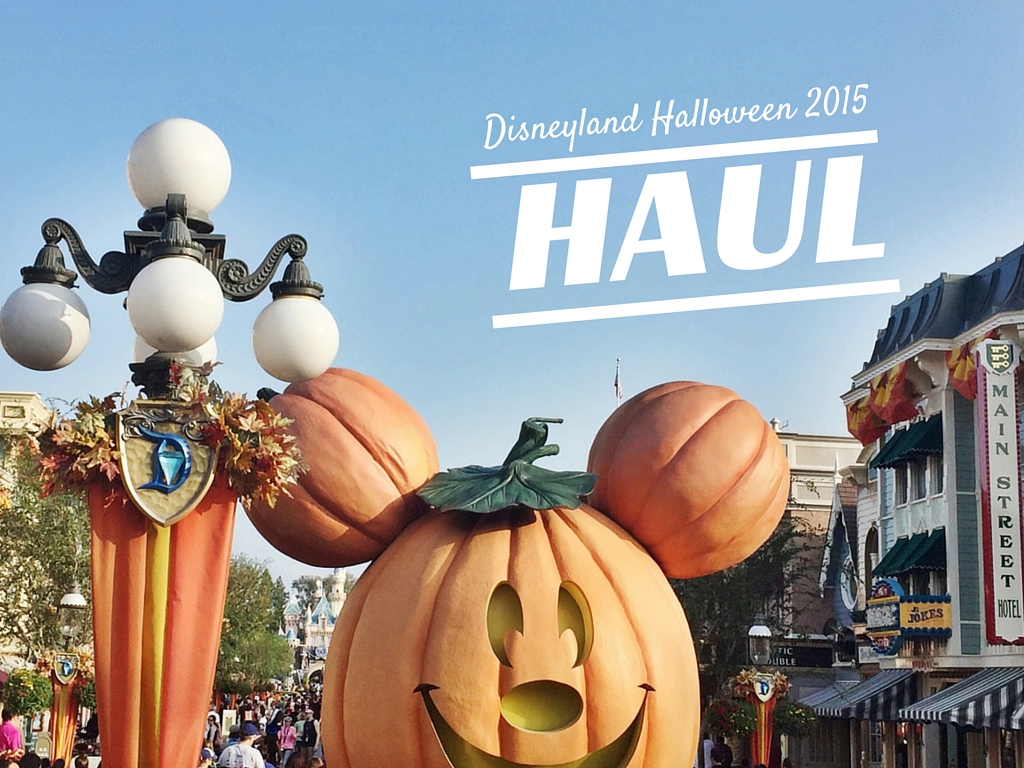 Happy Wednesday everyone! Since I just got back from Disneyland last week, I thought today would be the perfect time to share this month’s Disney Haul! I was so excited to introduce this new monthly Disney Haul series to the blog last month and I’m so grateful for all the positive responses it’s received so far (shoutout to all my fellow Disney lovers out there!) If you couldn’t already tell, I LOVE Disney, so I’m so happy that I get to incorporate more Disney on my blog thanks to this series. Just like in last month’s post, I want to add this quick disclosure: since I am a Disney Premier Passport holder (aka someone who has an annual pass to both Disneyland AND Disney World), I get a pretty good discount on merchandise (20% off at Disneyland and 10% off at Disney World.) I also wanted to add that EVERYTHING in this post was actually purchased with gift cards (my family always gives each other random “I love you gifts” and I always ask for Disney gift cards. I also had some Disney gift cards saved from past birthdays/holidays) so shoutout to my amazing family aka Lilo (my mom) and Ashley (my sister.) Here’s my Disneyland Halloween 2015 Haul: 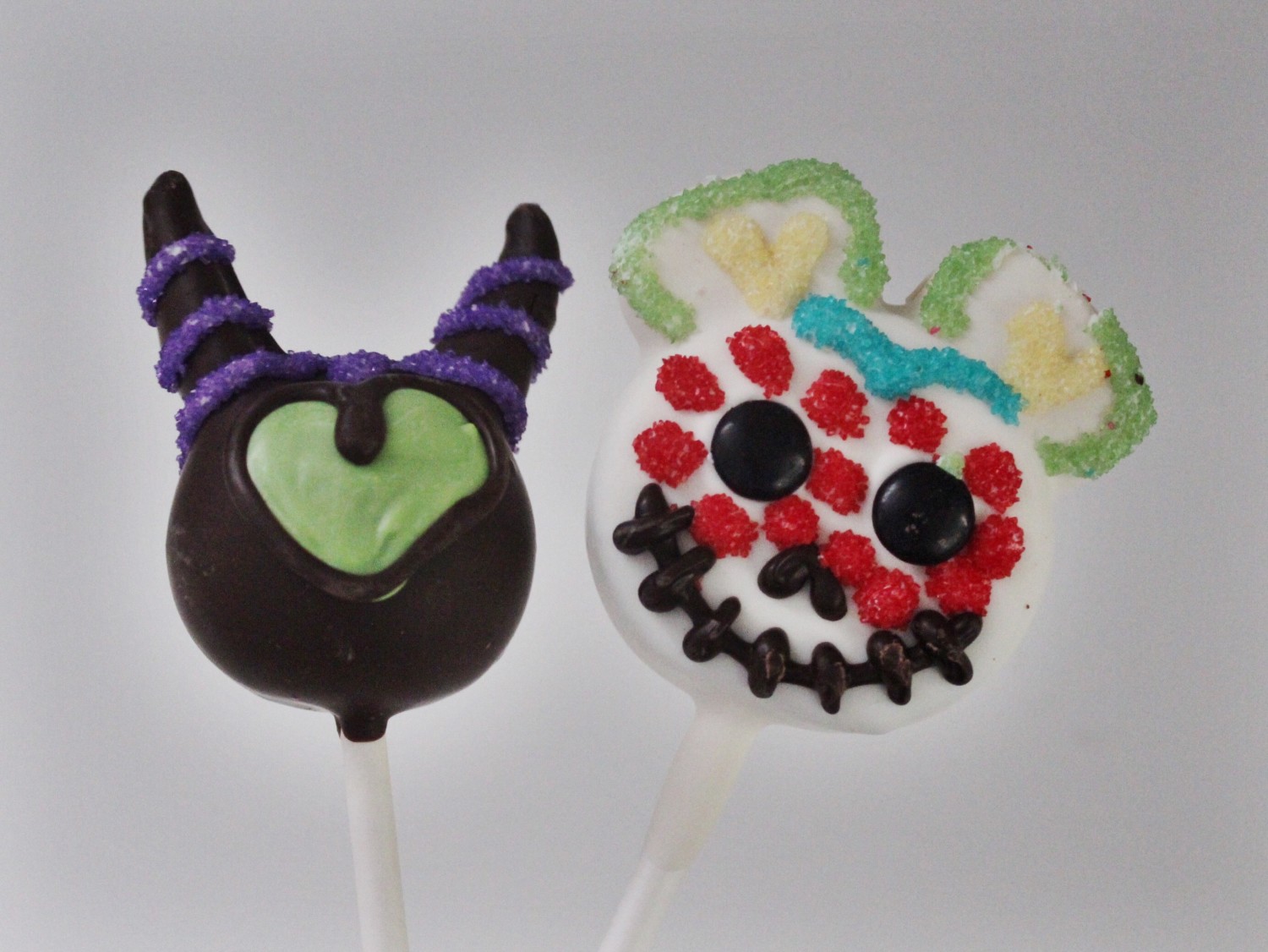 If you couldn’t already tell from my Disney World Summer 2015 Haul, one of my favorite Disney souvenirs is treats! Sure, you can get cake pops practically anywhere but there’s something about Disney cake pops that just make them yummier for some reason (I’ll chalk it up to Disney magic.) This trip I brought home a Maleficent and Dia de los Muertos cake pop (I also brought back an Olaf one but I ate it on the flight back to Chicago, whoops.) Both cake pops were chocolate (I don’t like the vanilla ones for some reason) and I’m counting down the days until my trip to Disney World in two weeks so I can get more! 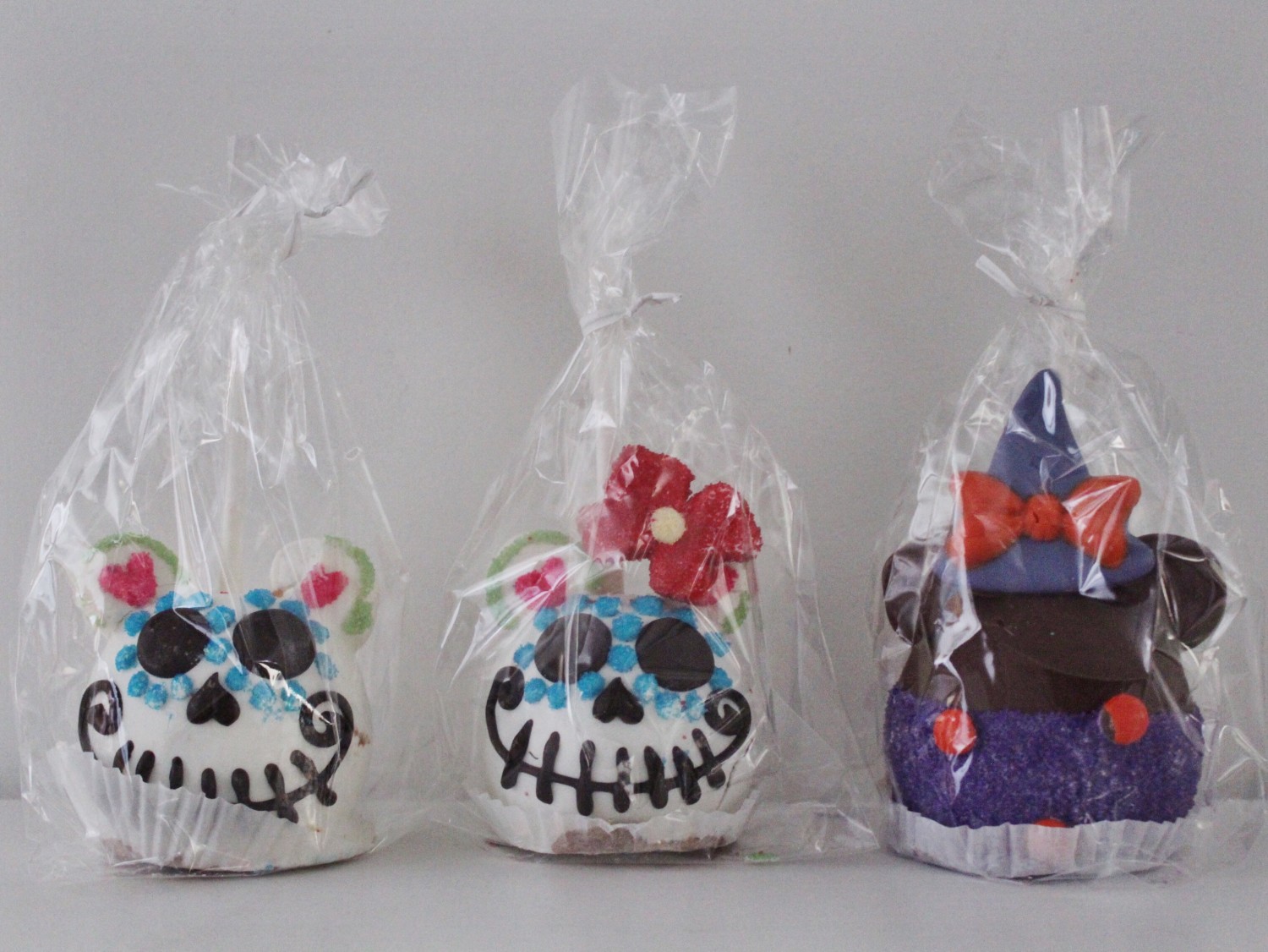 Okay, don’t judge me but I brought home THREE candy apples this trip (up until this point my record was two.) I feel in LOVE with the Dia de los Muertos candy apples (which are exclusive to Halloween time.) They’re just regular white chocolate candy apples (which happen to be my favorite) but you can’t deny how GORGEOUS they’re decorated. I also got a Minnie Mouse Halloween candy apple because you can never go wrong with Minnie! 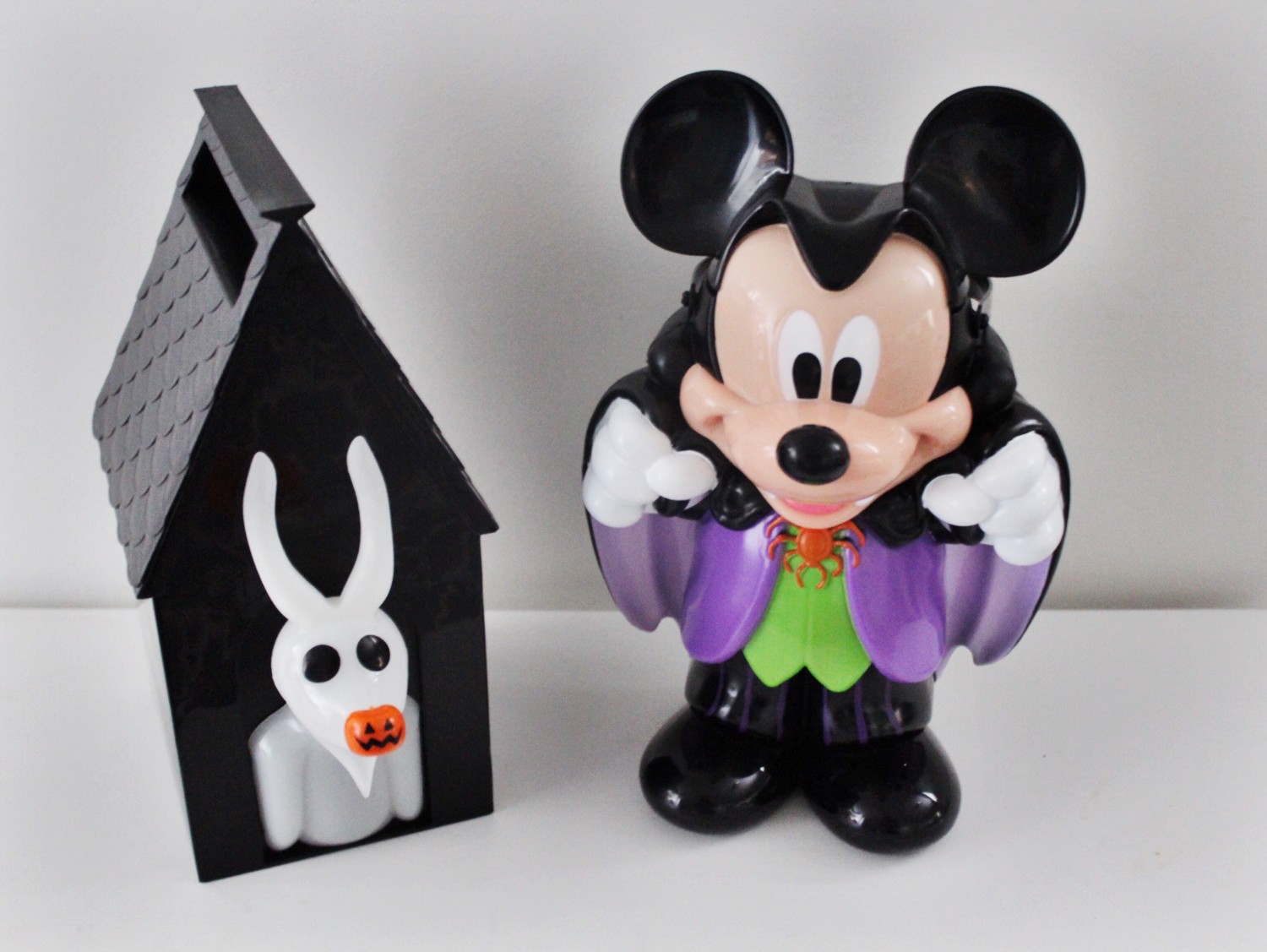 I’ve mentioned this on the blog before but in case you’re new to Simply Sinova, my family sort of collects Disney popcorn buckets (I’m not exaggerating when I say we have a closet full of them.) I didn’t think any popcorn bucket could beat the Cinderella Carriage I got when I visited Disneyland for the 60th Anniversary Diamond Celebration back in May but I LOVED the Halloween buckets! Like most of the seasonal popcorn buckets (and cups) these two sold out pretty quickly each day. Zero (who’s nose lights up and glows in the dark) was only available in front of the Haunted Mansion (and because of that, the line to get him was always super long) and I found Vampire Mickey right on Main Street. 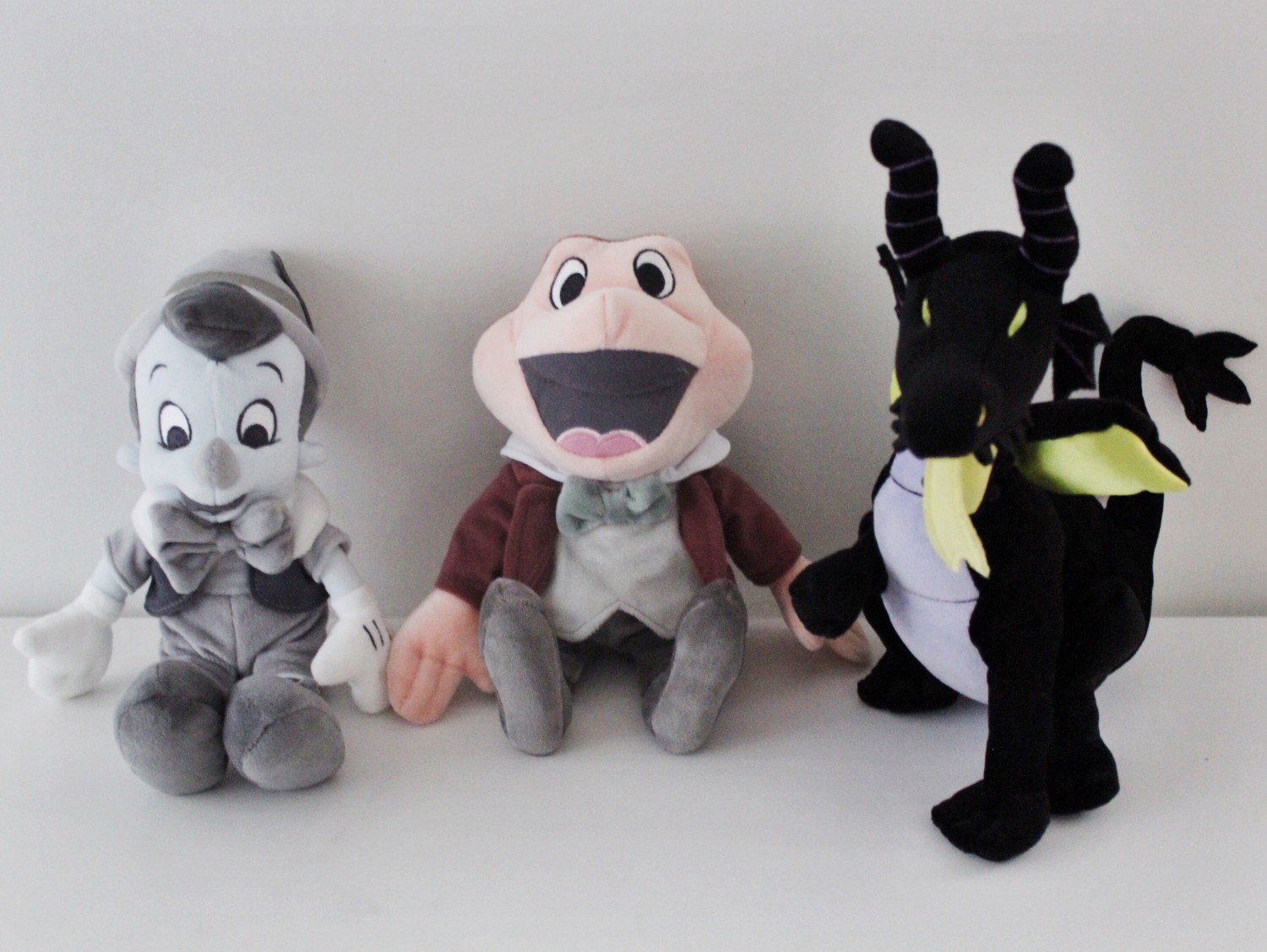 To celebrate 60 years of Disneyland, Disney released a set of four Limited Edition (or LE) plushies (each of the four representing 15 years of Disney.) The first in the collection (representing the first 15 years of Disney) was black and white Pinocchio. The second LE plush was Mr. Toad and the third is Maleficent in her dragon form (which I LOVE since you rarely see plushie’s of Maleficent as a dragon.) The fourth plushie (which hasn’t been released yet) will be the Genie from Aladdin (aka one of my favorite Disney characters.) I first saw the Pinocchio plushie when I visited Disneyland in May for the kick off of the 60th Anniversary Diamond Celebration but I wound up not getting it. After seeing the three together last week, I knew I had to get them (I can’t wait for Genie to be released!) 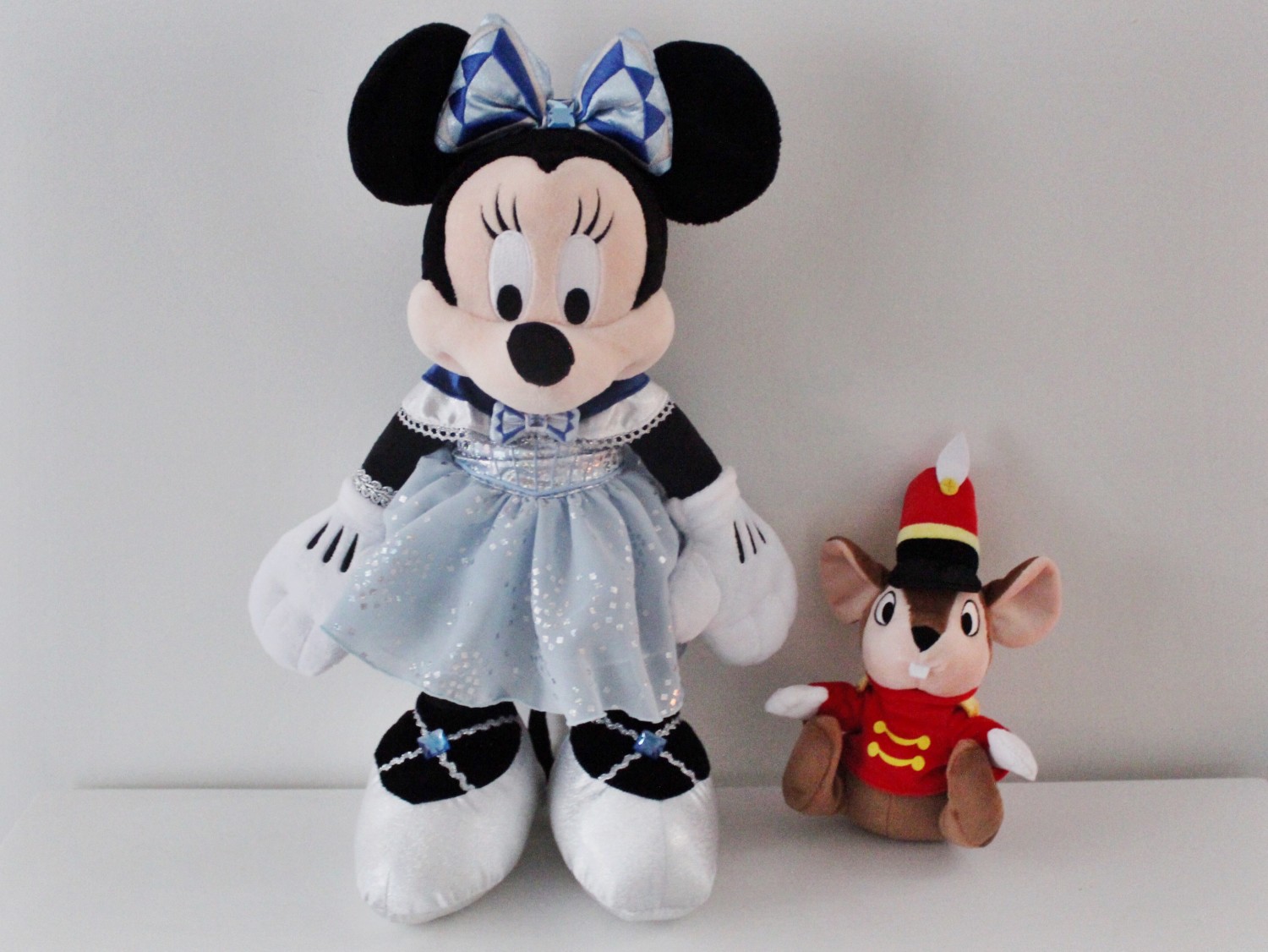 Speaking of plushie’s I saw but decided not to get while I was in Disneyland back in May, I couldn’t resist this adorable 60th Anniversary Diamond Celebration Minnie plush any longer. She’s just so adorable! I actually won that Timothy plush on Paradise Pier in California Adventure. I won him at one of those water gun shooting games (and I won him on the first try so he only ‘cost’ $5 aka the cost of one round of games!) 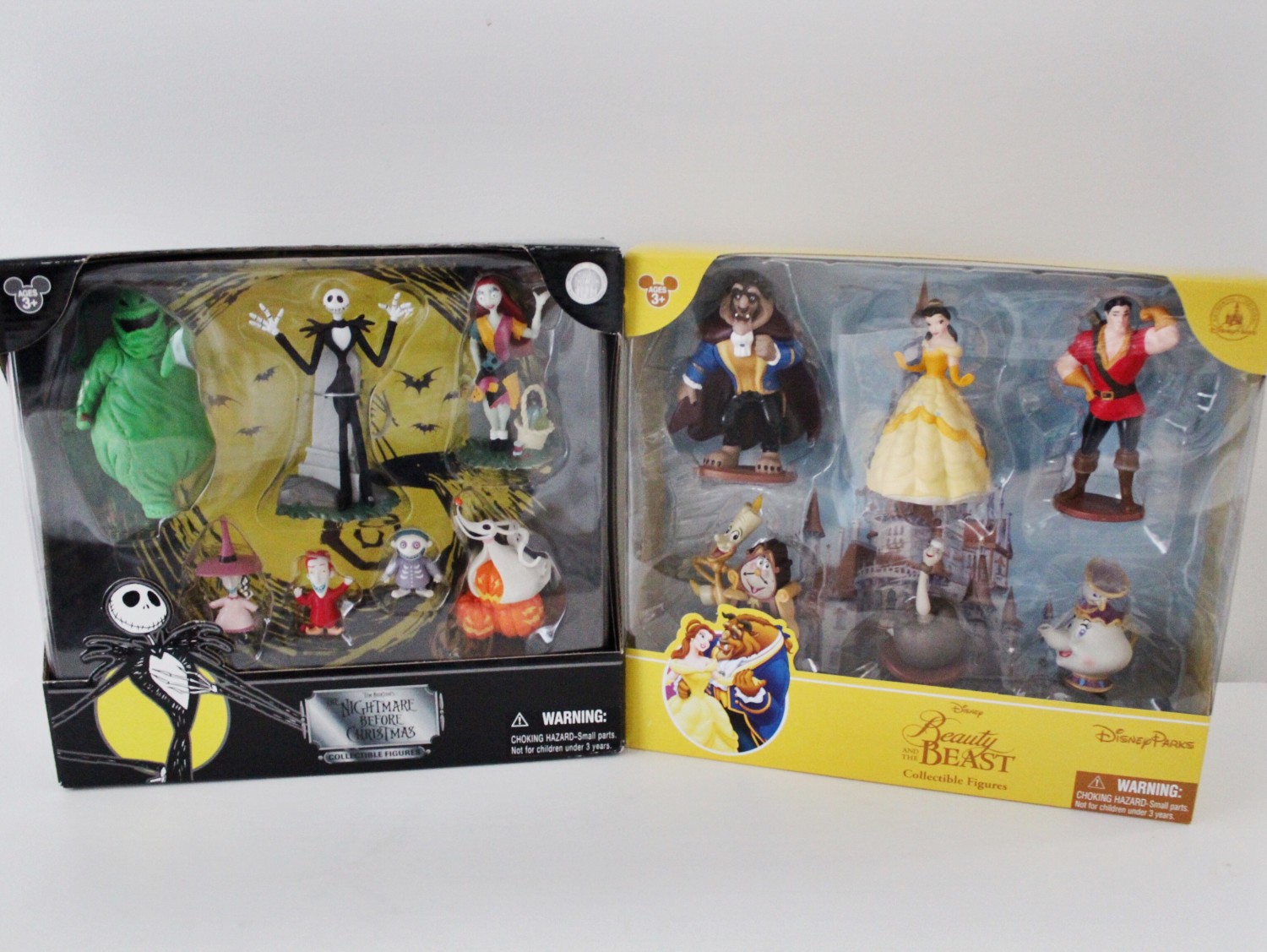 If it wasn’t already apparent from my Blind Box and Bag Roundup series, my Funko collection or my Tsum Tsum collection, I LOVE collecting things (especially mini figures!) This trip I decided to get two Disney Parks exclusive collectible figurine sets: The Nightmare Before Christmas and Beauty and the Beast. Haunted Mansion Holiday was one of my favorite things about visiting Disneyland during Halloween time so I knew I had to get The Nightmare Before Christmas set since it best represented this trip as a whole (and since the sets were two for $26 I also got Beauty and the Beast since it’s my favorite movie!) The NBC set comes with Jack, Sally, Oogie Boogie, Zero and Lock, Shock, and Barrel. The Beauty and the Beast set comes with Belle, Beast, Gaston, Mrs. Potts, Chip, Babette, Cogsworth and Lumiere. I forgot to take pictures of them but I also got a Mickey’s Halloween Party 2015 glow in the dark shirt and exclusive LE 2015 Halloween pin with Minnie Mouse on it. This trip I didn’t do any pin trading (although I packed over 35 pins to trade) so I’m hoping I see some cool pins to trade for during my trip to Disney World in two weeks.

Any fellow Disney lovers out there? Be sure to check out more Disney Haul, Disney World and Disneyland posts here on Simply Sinova (because there’s always room for more Disney!)