Happy Monday and welcome to another edition of Monday’s Music. Last weekend was one for the books. It started off pretty great since Saturday was the Magnificent Mile Lights Festival (aka the nation’s largest evening holiday celebration) but then things went south. It snowed basically ALL Saturday and since I spent a majority of the day outside (I don’t regret it because the Mag Mile Lights Festival was awesome, as always) I got super sick. I spent all day Sunday in bed desperately trying to get over this cold (I still feel a little under the weather but yesterday was really bad!) I don’t know about you but whenever I’m sick, nothing makes me feel better than a movie marathon! And what’s a good movie without a good soundtrack? This week’s Monday’s Music is dedicated to none other than my FAVORITE movie soundtracks. A quick note: I decided NOT to included any movie musicals because that’s a topic for another week. I also didn’t include any Disney soundtracks since I’m already covering those in my Disney Playlists. 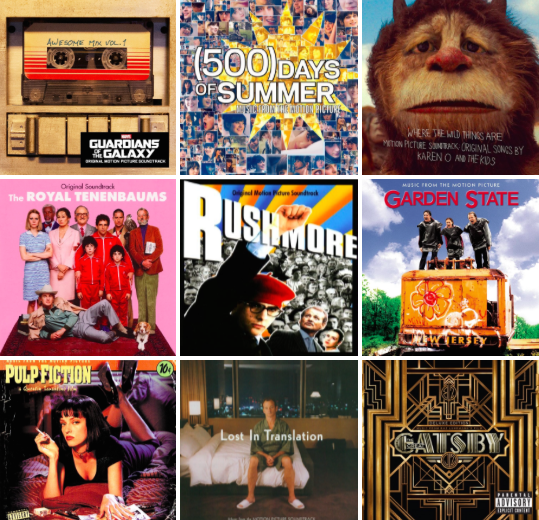 • Guardians of the Galaxy: Awesome Mix Vol. 1. I am in LOVE with this soundtrack! It’s definitely one of my most played vinyl records right now.

• 500 Days Of Summer. I’ll admit it, I can’t stand the fact that so many people jumped on the bandwagon when it comes to this film but I love it (and its soundtrack) nonetheless!

• Where the Wild Things Are. An underrated film and an underrated soundtrack (sounds like my cup of tea!) Seriously, this soundtrack never fails to make me smile.

•  The Royal Tenenbaums & Rushmore. What did you expect? It’s no secret that Wes Anderson is my FAVORITE screenwriter and director. If you’re a Wes Anderson fan (how can you not be?!) make sure to check out my Wes Anderson Monday’s Music Playlist.

• Garden State. I’ll just go right ahead and say it: this is the BEST movie soundtrack EVER! Seriously, EVERY SONG is perfection! I’ve been in love with this soundtrack since I first saw the film in 2004 (in fact, I still have my original soundtrack CD!)

• Lost in Translation. I found out a few weeks ago that one of my friends has NEVER seen Lost in Translation (how are we friends?!) Weird right? Anyway, I love listening to this soundtrack whenever I’m feeling stressed and want some good background tunes!

What’s your favorite movie soundtrack?
*Be sure to check out other Monday’s Music playlists HERE*