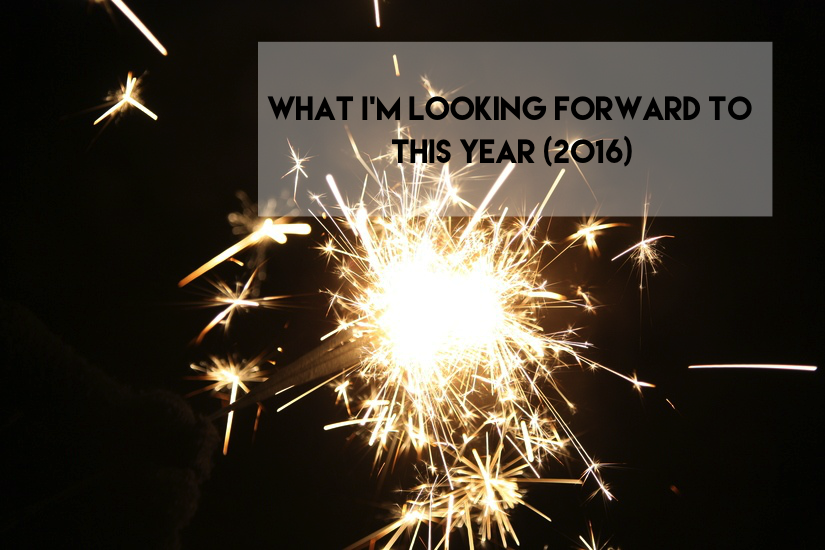 Happy 2016!! Even though we are only a few days into the year, I can already tell that 2016 is going to be amazing (it doesn’t help that I’ve spend most of 2016 at Disney World!) 2015 was such a GREAT year for me. I adopted my little Loki (who turns ONE YEAR OLD next month?!) traveled like crazy (I took 11 trips in 2015), made new friends (and distanced myself from a few toxic friendships) and truly discovered the path to happiness! Last year was also an awesome year for Simply Sinova. I got invited to dozens of advance screenings and even got to meet/chat with Pixar legends Pete Docter (who worked on Inside Out, Toy Story, Toy Story 2, Monsters Inc, WALL-E & Up) and Jonas Rivera (who’s also worked on several Pixar films!). I also entered a long standing sponsorship with one of my FAVORITE brands: Target! And that’s not even the half of it! Yup, 2015 was AMAZING but here’s hoping for an even better 2016! Similar to last year’s New Years post, today I’ll be sharing some of the shows, trips, and movies I can’t wait for this year. Here’s what I’m looking forward to in 2016: 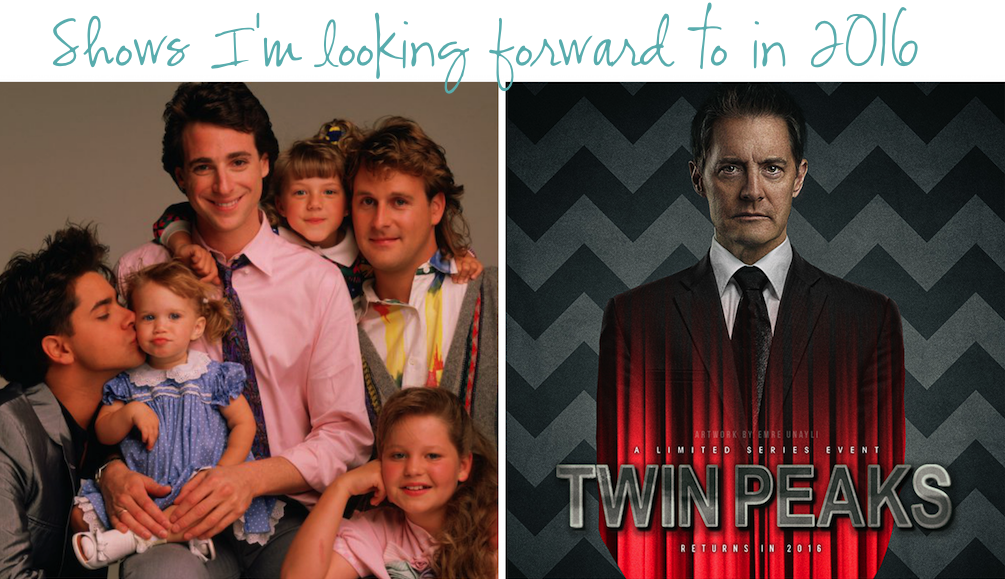 • Fuller House. I am a HUGE Full House fan! No seriously, I have EVERY episode memorized (I also have the entire series on DVD.) Although I don’t expect this spinoff to be as good as the original (that ‘feel-good’ type of show is hard to pull of in this day and age), I can’t wait to see what the Tanners are up too!

• Twin Peaks. I LOVE Twin Peaks. If you’ve never seen it (seriously, how is that possible?!) I URGE you to get on it!

•  If/Then. I was originally suppose to see this show when I was in New York last January but I only had time to see one show, so I went with Matilda: The Musical (which I LOVED and can’t wait to see again this summer!) Lucky for me, If/Then is coming to Chicago later this year so I can finally cross it off my Broadway bucket list.

•  An American in Paris. Every time I’m in New York, I always try and see a new Broadway show (especially since most shows don’t open in Chicago until much later!) An American in Paris is one of the only shows I haven’t yet so my goal is to see it this year!

• Hawaii. My mom lived in Hawaii for four years before my sister and I were born and she hasn’t been back since. Since I’ve always wanted to visit (and she’s been missing it a lot lately), we’ve decided to plan a trip there this year. We’re thinking of spending next New Years Eve there!

• California. It’s become sort of a tradition to spend my mom’s birthday (which is in May) at Disneyland so that’s something to look forward to this year.

• New York. Fingers crossed that I get picked to attend another SNL live taping this year! If not, I know I’ll be visiting NYC again in October for New York Comic Con. 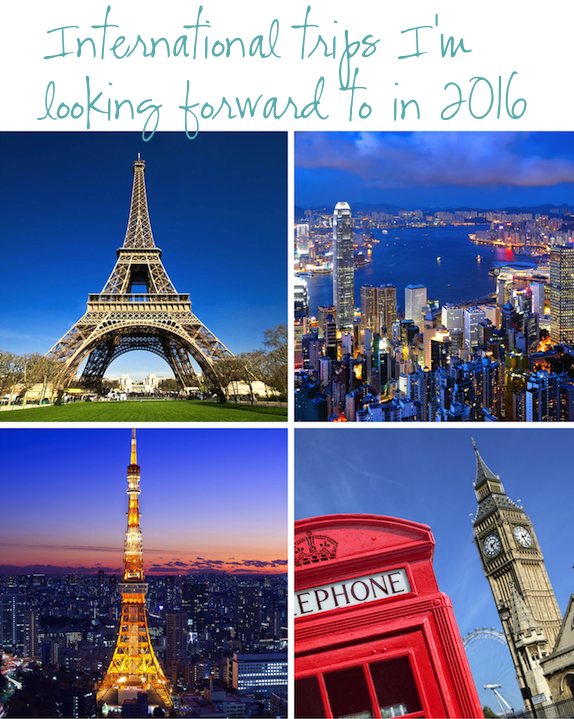 • Paris. I am so EXCITED to FINALLY get to visit Paris this spring! I’m going for my 24th birthday (in April) and I can’t even express how happy I am. I’ll be spending nine whole days in Paris and of course, I’ll be visiting Disneyland Paris (because that’s the whole reason I choose to visit Paris for my birthday in the first place!)

• Hong Kong and Tokyo. 2016 is the year for international Disney trips! Along with Disneyland Paris in the spring, I plan on visiting Hong Kong Disneyland and Tokyo Disneyland this summer!

• London. While I’m in Paris, I’ll be making a quick trip to London for the Warner Bros. (aka Harry Potter) Studio Tour! I’m so excited to finally visit London because London holds a very special place in my family’s heart. My mom lived in London for four years and it’s where my sister was born. So essentially, my family was created in London (since my ‘family’ is my mom, sister and me!) 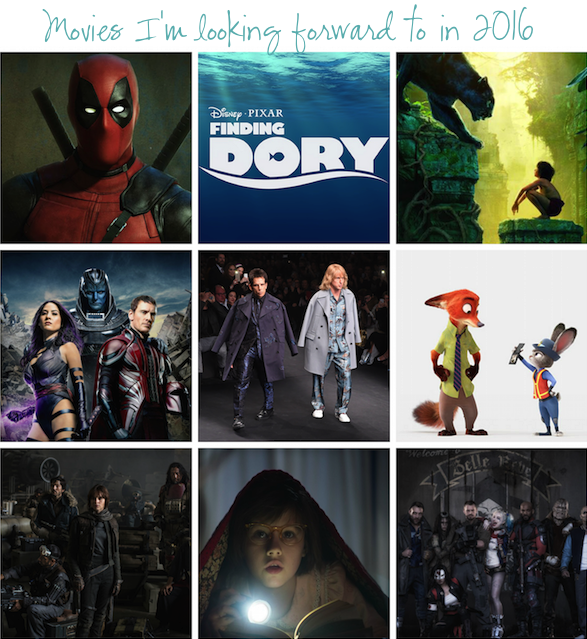 • Deadpool. I LOVE Deadpool (how can you not? He’s hilarious!) Fingers crossed this movie is as good as the commercial makes it out to be!

• The Jungle Book. I was so skeptical of a live-action Jungle Book but then I saw the trailer and boy does it look good! Fun fact: This film comes out the day I leave for Paris (April 15 aka two days before my birthday!)

•  X-Men: Apocalypse. It’s so secret that I am a HUGE X-Men fan so I can’t wait to see this film.

• Zoolander 2. I LOVE Zoolander so much. Here’s hoping this one is half as funny as the original.

• Zootopia. The more commercials I see for this film the more I’m counting down until its released! (Plus, who doesn’t love Ginnifer Goodwin’s adorable voice?!)

• Rogue One: A Star Wars Story. Star Wars is my EVERYTHING and during my trip to Disneyland during the holidays, I got to see a little sneak peak/BTS of Rogue One and it looks very interesting.

• The BFG. I am a HUGE Roald Dahl fan and The BFG was one of my favorite books growing up!

• Suicide Squad. I am the first to admit it, I am NOT a DC Comics fan (Marvel ALL DAY EVERYDAY!). In fact, the ONLY DC Comics superhero I like is Batman (if only Batman was Marvel.) But I am SUPER excited for Suicide Squad!

* I’m also really looking forward to Fantastic Beasts and Where to Find Them, Ghostbusters and several other films!*

What shows, music, films or trips are you looking forward to in 2016?