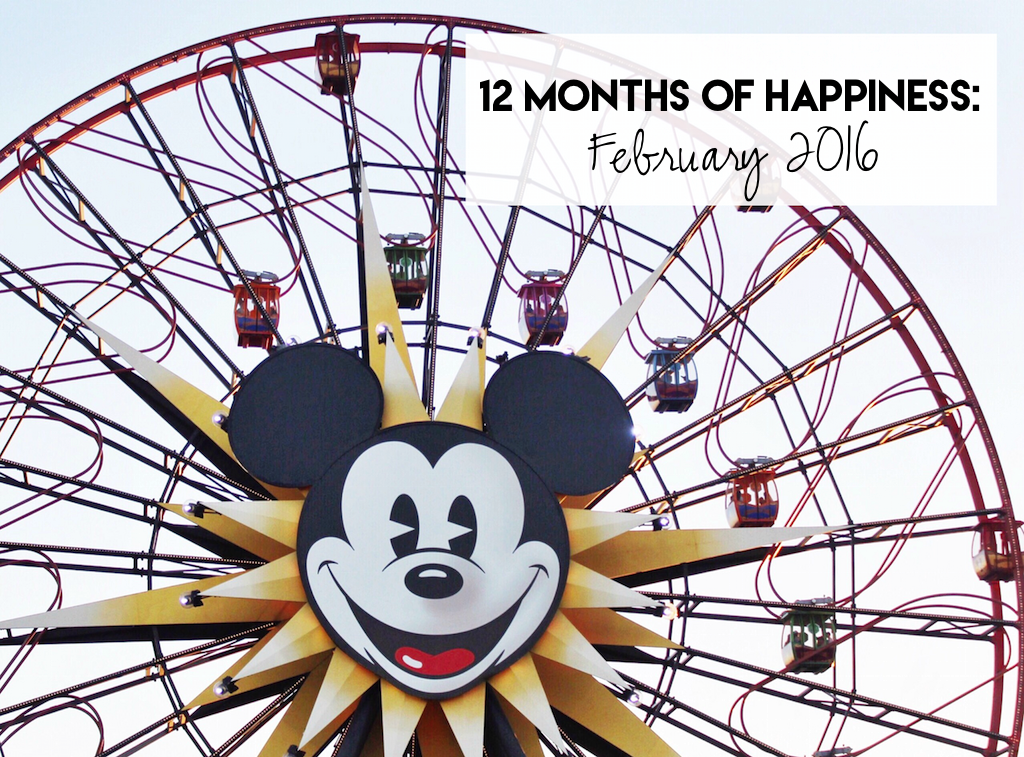 Happy Monday (raise your hand if you also spent your entire weekend binge-watching Fuller House) and welcome to the latest installment of my 12 Months of Happiness series. Is it just me or is 2016 ZOOMING BY?! No seriously, I can’t believe tomorrow is March already! Side note, happy February 29th (how often can we say that, well, I guess every four years but you know what I mean.) I’ve never met anyone born on February 29th/a leap year and I’ve always wondered if they’d celebrate their birthday on February 28th or March 1st during non-leap years? Personally, I would celebrate my birthday on BOTH days and then have a HUGE party on my actual birthday whenever a leap year rolled around but that’s just me. Speaking of birthdays, since tomorrow is March, that means I have less than two months until my birthday (in April) and my trip to Europe! Side note aside, here are some of the things that made February an amazing month: (Don’t forget to comment down below how your February went and what things made you smile this month! I LOVE hearing from you guys about what makes you happy!)

This year I spent Valentine’s Day at Disneyland and it was so AMAZING! I just love getting to experience different holiday’s at the Disney Parks! So far I’ve spend Valentine’s Day, President’s Day, Memorial Day, Christmas Eve, Christmas, New Year’s Eve and New Year’s Day at the Disney Parks. The next holiday I plan on spending at Disney is my birthday (yes, I consider my birthday to be a holiday!). I’ll be celebrating my 24th birthday at DISNEYLAND PARIS this April (and I couldn’t be more EXCITED!).

February 14th might be Valentine’s Day but it’s also Loki‘s BIRTHDAY! That’s right, my little Loki turned one year old on Valentine’s Day. Sadly, since I was at Disneyland, I couldn’t spend his birthday with him (don’t worry, he was too busy being spoiled rotten by my family to even realize I was gone). Since I couldn’t be back home in Chicago with him, I decided to bring him (well, sort of) with me to Disneyland! I carried around a little picture of him with me during my entire trip (how adorable is that picture of him in front of the castle?! I’m in love with that Disney Dogs Photo Frame I got back in 2014 from Disney World.)

February was a GREAT month for blind boxes! I picked up a few Frozen Surprise Eggs, Funko Disney Princess Mystery Minis and Zootopia Mystery Minis this month and I’m so happy with all the new figures/collectables I got (stay tuned for the Zootopia themed Blind Box and Bag Roundup this Friday! Love BB&BR posts? Make sure to check out the Frozen Surprise Egg and Funko Disney Princess Mystery Mini Blind Box and Bag Roundups posts!).

This month marked the end of my monthly Disney trips (insert crying emoji!). I still can’t believe that from August 2015- Feburary 2016 I visited either Disneyland or Disney World EVERY MONTH (I’ve literally visited the Disney Parks EIGHT times in the past 9 months, crazy right?). It’s weird because so many people just assume I live close to the Disney Parks since I visit so often (which IS NOT the case). In case some of you didn’t know, I live in CHICAGO (aka my favorite place in the world) which is pretty far from BOTH California (Disneyland) and Florida (Disney World.) I don’t visit Disney so much because I live close (since I DON’T), I visit Disney so often because it’s my HAPPY PLACE! There’s no where I’d rather spend my days than at the Disney Parks.

I can’t believe tomorrow is March?! What made you happy in February?
Make sure to check out the entire 12 Months Of Happiness series HERE!