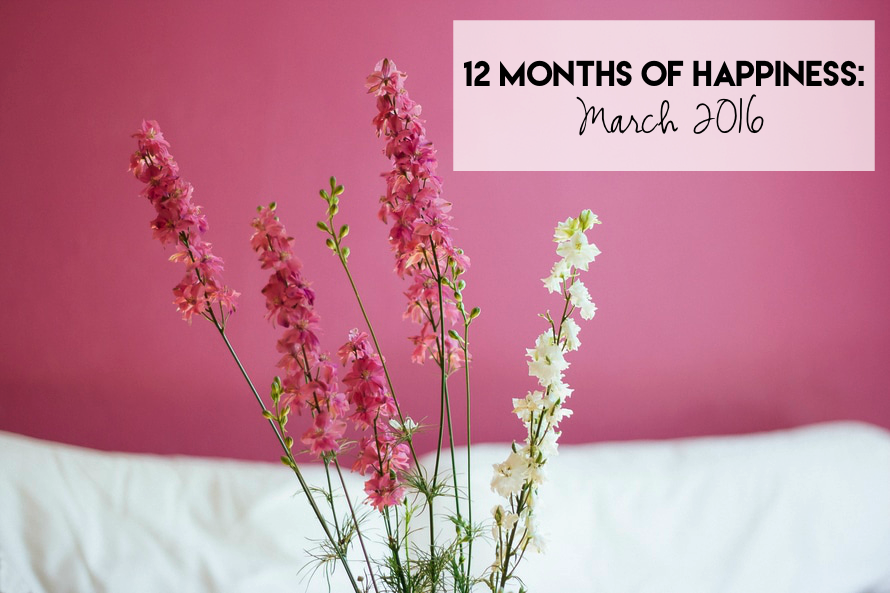 Happy Thursday (aka Friday Eve, am I right?) and welcome to the latest installment of my 12 Months of Happiness series! I know that I say this every month but I still can’t believe how fast 2016 is zooming by?! Seriously, I can’t believe that tomorrow is April already?! Although this month was awesome, I’m actually super HAPPY that March is finally over and that tomorrow is April because April is my birthday month (and I’m heading to Europe to celebrate my birthday! I can’t believe that in just 15 DAYS I’ll be at DISNEYLAND PARIS!). This month was definitely one for the books. One the one hand, I attended so many awesome events and had a lot of great opportunities come my way this month. Although on the other hand, I’ve been battling a HORRIBLE cold for the past week and a half (I’m still feeling a little under the weather but I’m definitely doing better than I was last week). Sickness aside, March was still a super great month! Here are some of the things that made March an amazing month: (Don’t forget to comment down below how your March went and what things made you smile this month! I LOVE hearing from you guys about what makes you happy!)

I know what you’re thinking, “Isn’t this the EXCAT same 12 Months of Happiness Easter photo collage you used last year?” Yes, yes it is but I didn’t really take a lot of photos this Easter so… With that being said, this year’s Easter consisted of lots of Peep tasting, chocolate bunny eating, egg dying, egg hunting and spending lots of time with my loved ones. I honestly couldn’t have asked for a better Easter Sunday than that.

As some of you may recall, one of my goals for 2016 was to not only focus on growing my record collection more this year but to also share more about my record collecting in general here on the blog. This month I added a few new vinyls to my ever growing record collection and I couldn’t be happier! My goal this year is to finally cross off “owning 100 records” from my 25 before 25 bucket list (I’m a little under halfway there!). If I keep up my biweekly vinyl hunts, I definitely think I can hit 100 records by December!

Zootopia was such an ADORABLE movie! Not only was the movie super cute but so is the merchandise. I’m in LOVE (and a tad bit obsessed) with all the Zootopia merch out there. From the super cute Funko Pop’s to the adorable tsum tsum’s (the Target exclusive meter maid Judy Hopps just makes my heart happy, if that makes sense), I just want it all (the Easter Bunny even brought me a Zootopia coloring book for Easter!).

Although I’ve attended Chicago Comic Con, New York Comic Con 2014 and NYCC 2015 before, this year was my first time attending the Chicago Comic and Entertainment Expo (aka C2E2). C2E2 is a Chicago fan convention dedicated to comics, pop culture, graphic novels, anime, manga, video games, toys, movies, and television. So essentially, it’s similar to other “comic cons” but it’s more pop culture and entertainment based (which is right up my alley!) C2E2 2016 was AMAZING! There was so much awesome cosplay at C2E2. I’m seriously  already counting down the days until C2E2 2017 (and Chicago Comic Con this summer!).

Here’s a few other things that made me happy in March:

I can’t believe tomorrow is April?! What made you happy in March?
Make sure to check out the entire 12 Months Of Happiness series HERE!