Happy Monday and welcome to another edition of Monday’s Music! As some of you may already know, I switched over to WordPress (from Blogger) last October and although that was over five months ago, I’ve YET to completely update all my archived posts from the transfer (whoops!). Essentially when you transfer from Blogger to WordPress you have to manually update a few things like photo sizes, links and all that jazz. I decided to spent a few hours this weekend updating some of my archived Monday’s Music posts and I realized that EXACTLY two years ago (aka March 7, 2014) I updated a Favorite Songs of the Week Monday’s Music! So today, I thought it would be a cool idea to do another “favorites” playlist. Here are nine of the songs I’ve been listening to a lot lately: 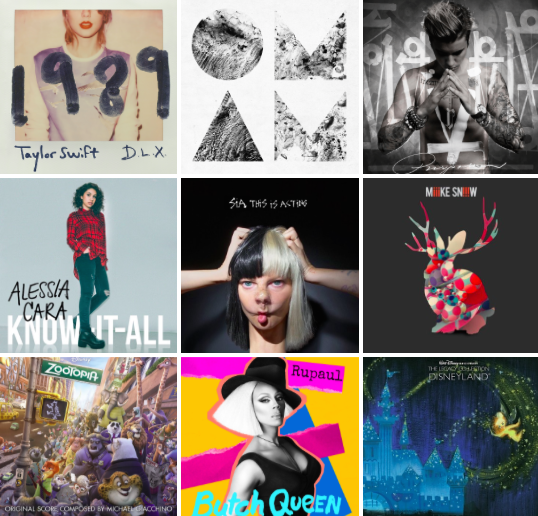 • New Romantics. This song just makes me want to dance (and it always makes me smile).

• Empire. I just LOVE Of Monsters and Men (I’m so glad I got to see them live at Lollapalooza last summer) so much! I could listen to their music one repeat for HOURS!

• Company. Like him or not, I don’t think anyone can deny that Justin Bieber made a HUGE comeback in 2015! Company is definitely one of my favorite songs from Purpose!

• Cheap Thrills. Whenever I hear any Sia song, I automatically think of the AMAZING time when I got to go to the SNL live taping where she was the musical guest. Talk about one of the BEST days of my life!

• Try Everything. This song just makes me so happy (and it fit so perfectly in Zootopia!).

• Disneyland 60th Anniversary Legacy CD. I’ve literally been listening to Disneyland music for the past two weeks. What makes this CD so awesome is the fact that it includes the music that’s used in the actual rides at Disneyland (for example, it includes the songs you hear while you’re riding Splash Mountain, Haunted Mansion, etc.).

What songs have you been listening to lately?