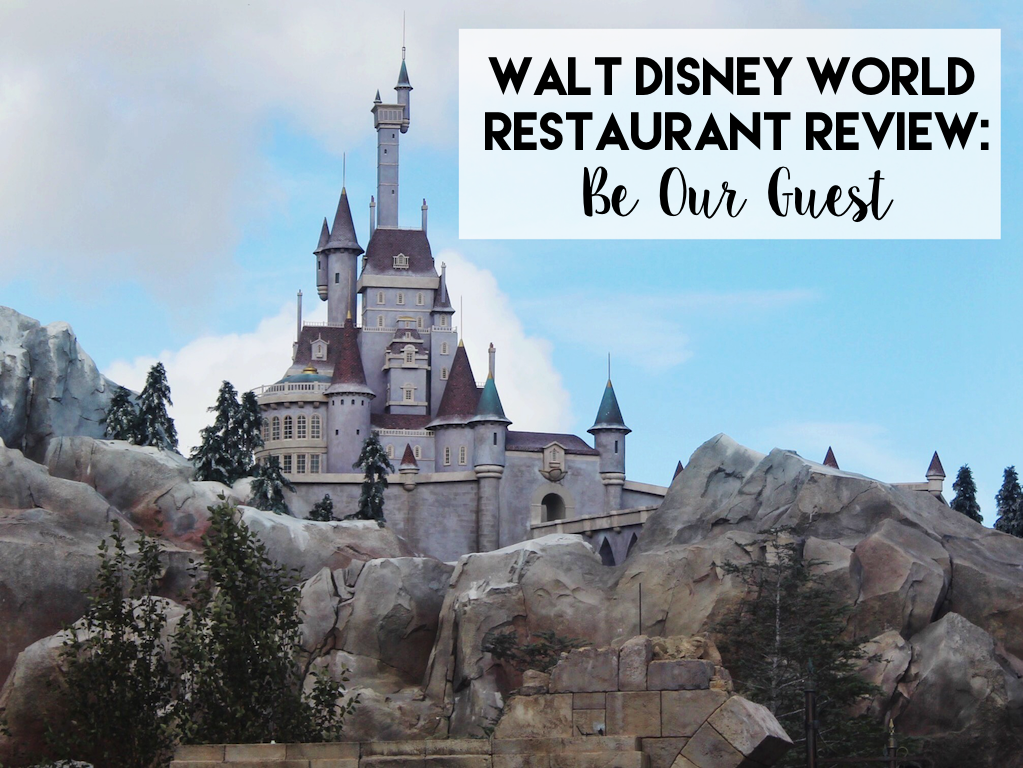 Well, it is officially the end of an era. As of Monday (May 23), my Disney Premier Passport is no longer active. Meaning, I am no longer an annual passholder to Disneyland OR Disney World (although, I’m still a Disneyland Paris annual passholder until April 2017 so that’s awesome). I still can’t believe how fast time flew by. When I first purchased my Disney Premier Passport back in May 2015 (during the kickoff of the Disneyland 60th Anniversary Diamond Celebration), I could have never imagined that I would have visited the Disney Parks TEN times in just 12 months (especially since I live in Chicago/nowhere near the Disney Parks). But since I LOVE Disney and it’s such a huge part of my life, I made it my priority to visit whenever I could (I actually plan on writing a “pros of being a Disney annual passholder post” soon!). On the bright side, I’m heading back to Disney World in August (where I’ll be becoming a Disney Premier Passport holder again) and I was able to score reservations at Be Our Guest again. Speaking of Beauty and the Beast, have you seen the teaser trailer? Since I’ll be dining at Be Our Guest again (this time for lunch) this summer, I thought today would be the perfect time to talk about my Be Our Guest dinner experience last Christmas. 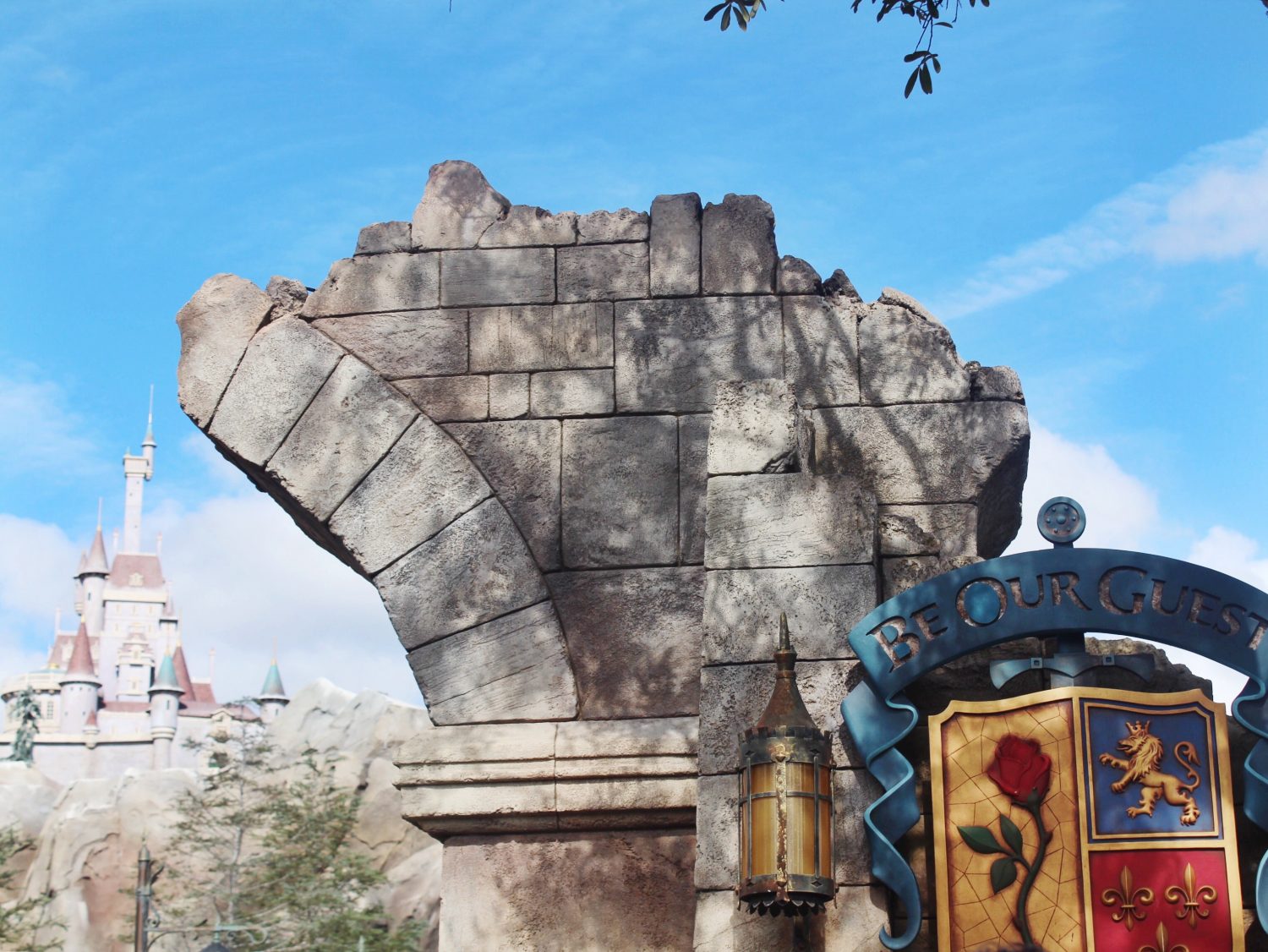 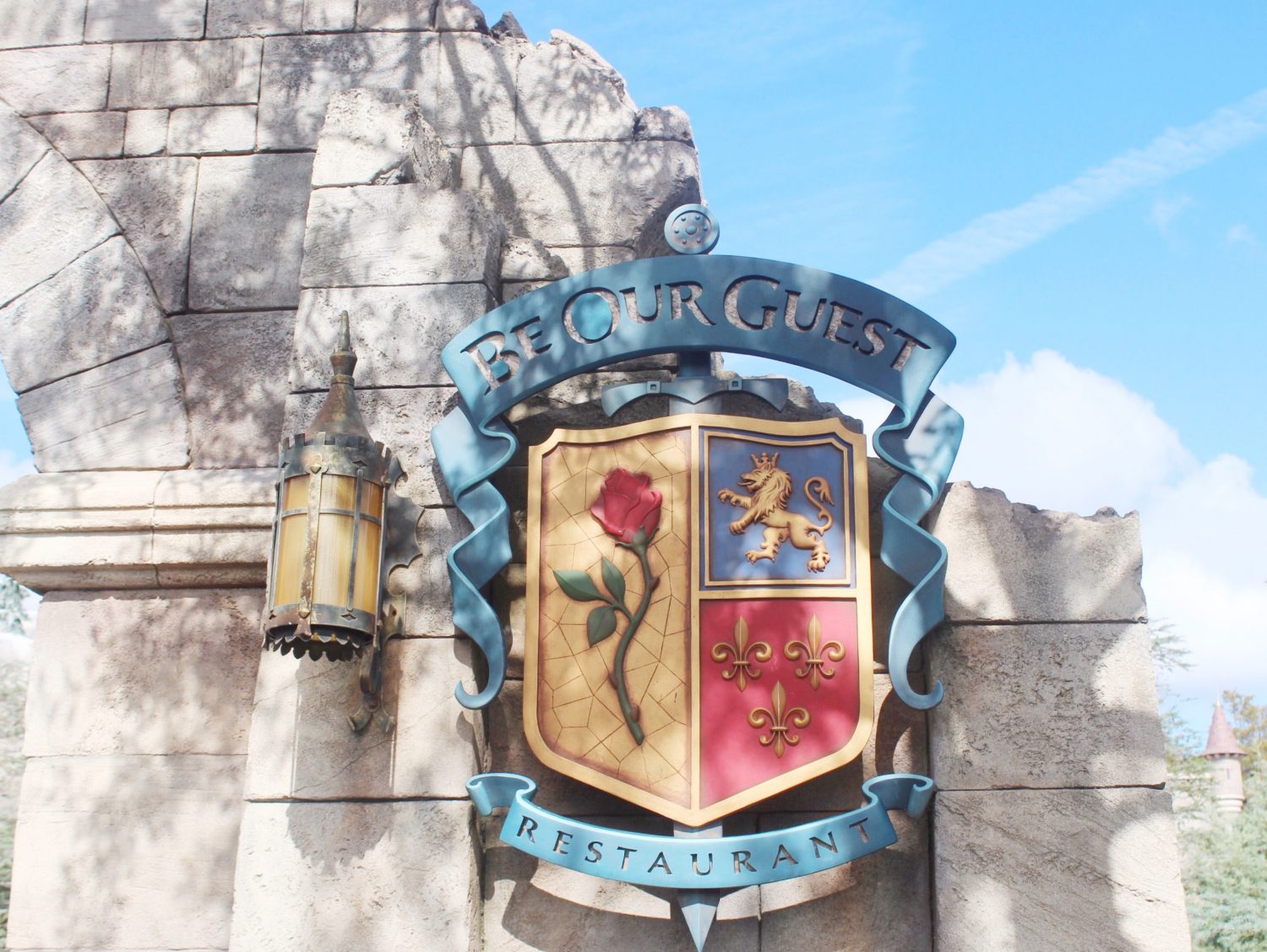 Be Our Guest is a MUST for any Beauty and the Beast fan! The theming of the restaurant is absolutely perfect. The only problem is, getting reservations for Be Our Guest is super difficult. Depending on the time of year you’re visiting, you almost have to book six months in advance. When I ate there for dinner during the holidays (December 26), I had to make reservations in JUNE and even then there were only two or three tables available. Although, I only had to book three months in advance to score a table for lunch in August. With Be Our Guest reservations, it’s literally the luck of the draw. I know someone who was able to get same day reservations (which is almost unheard of) thanks to someone making a last minute dinner cancellation. 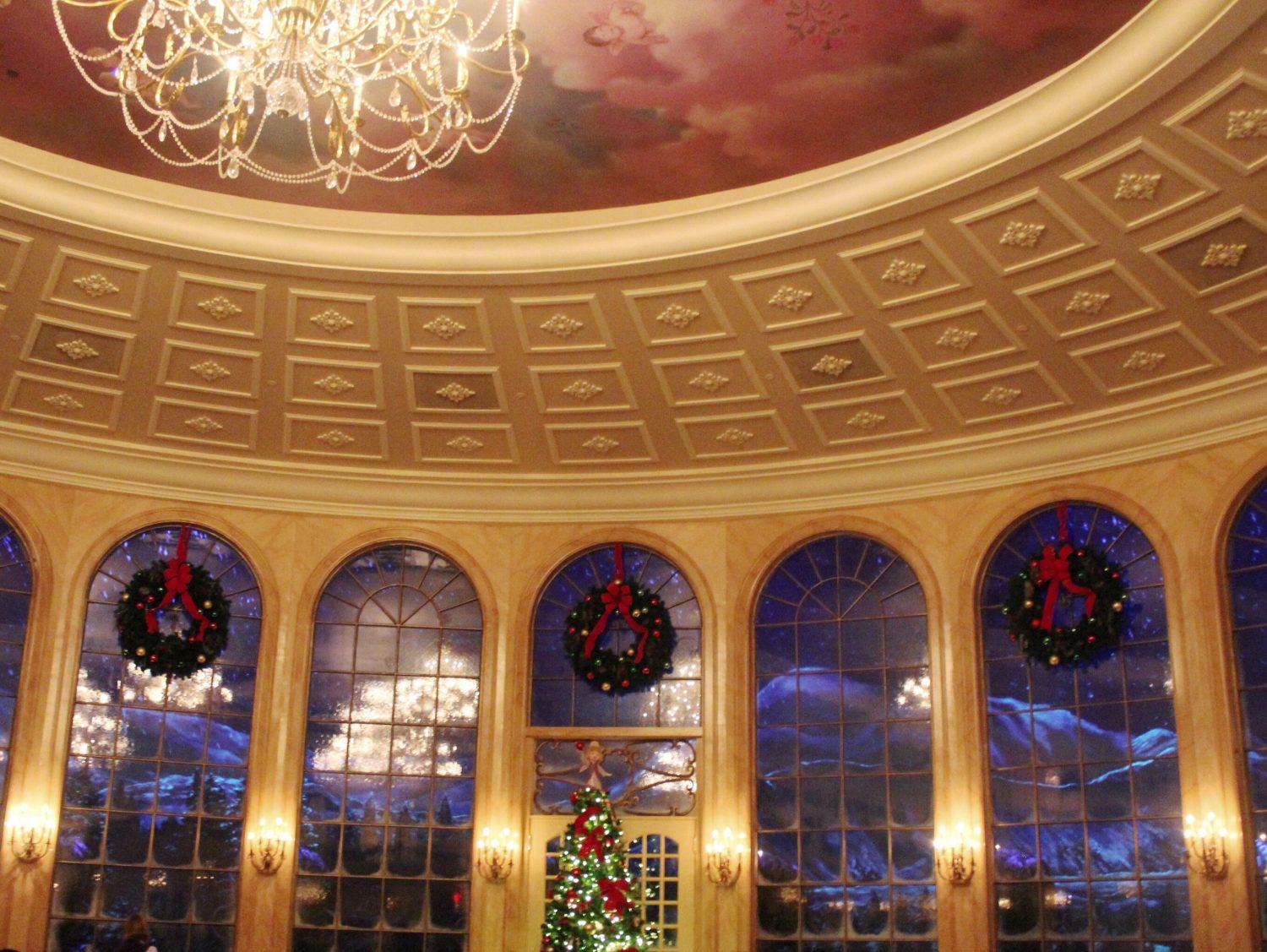 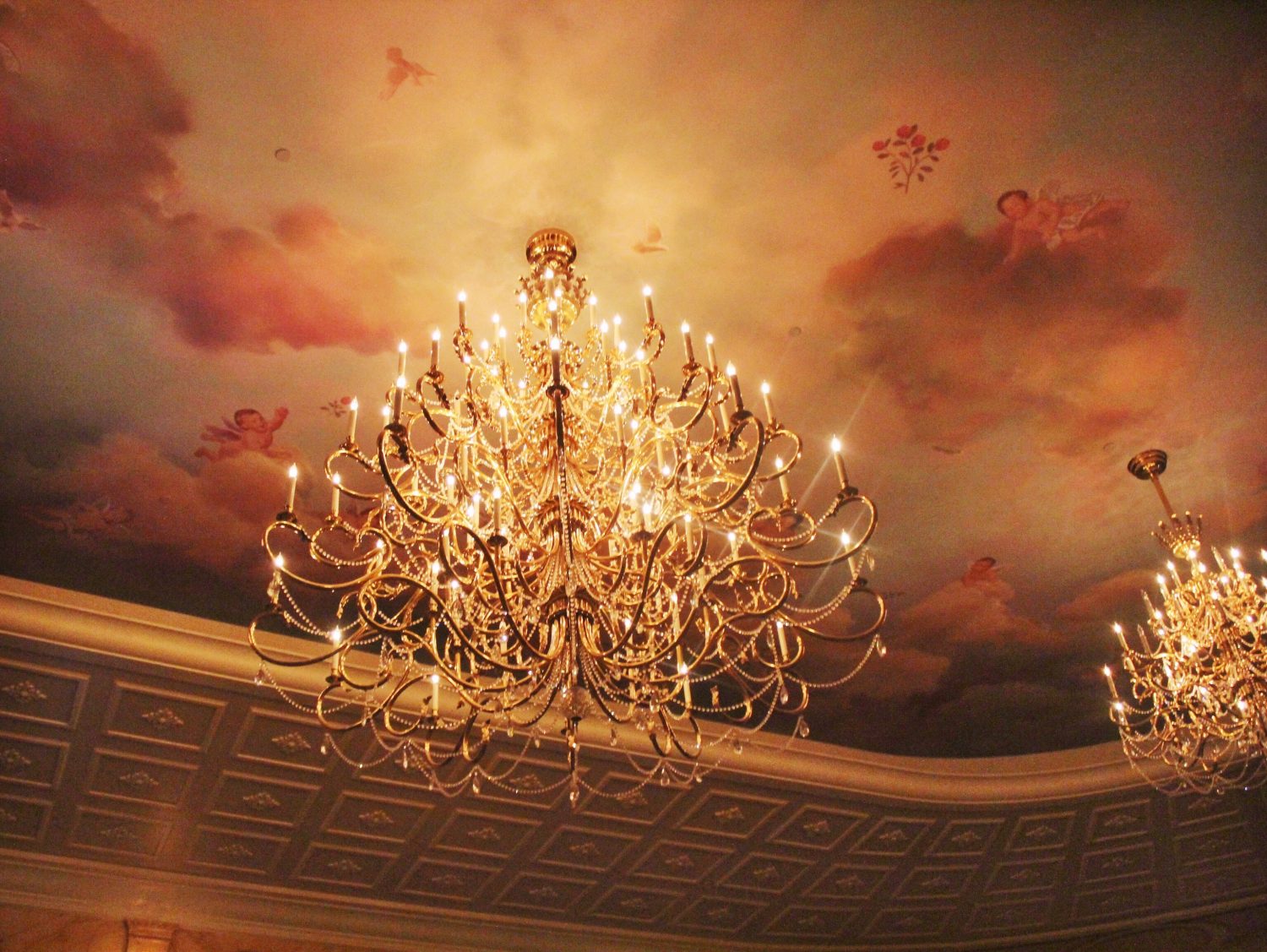 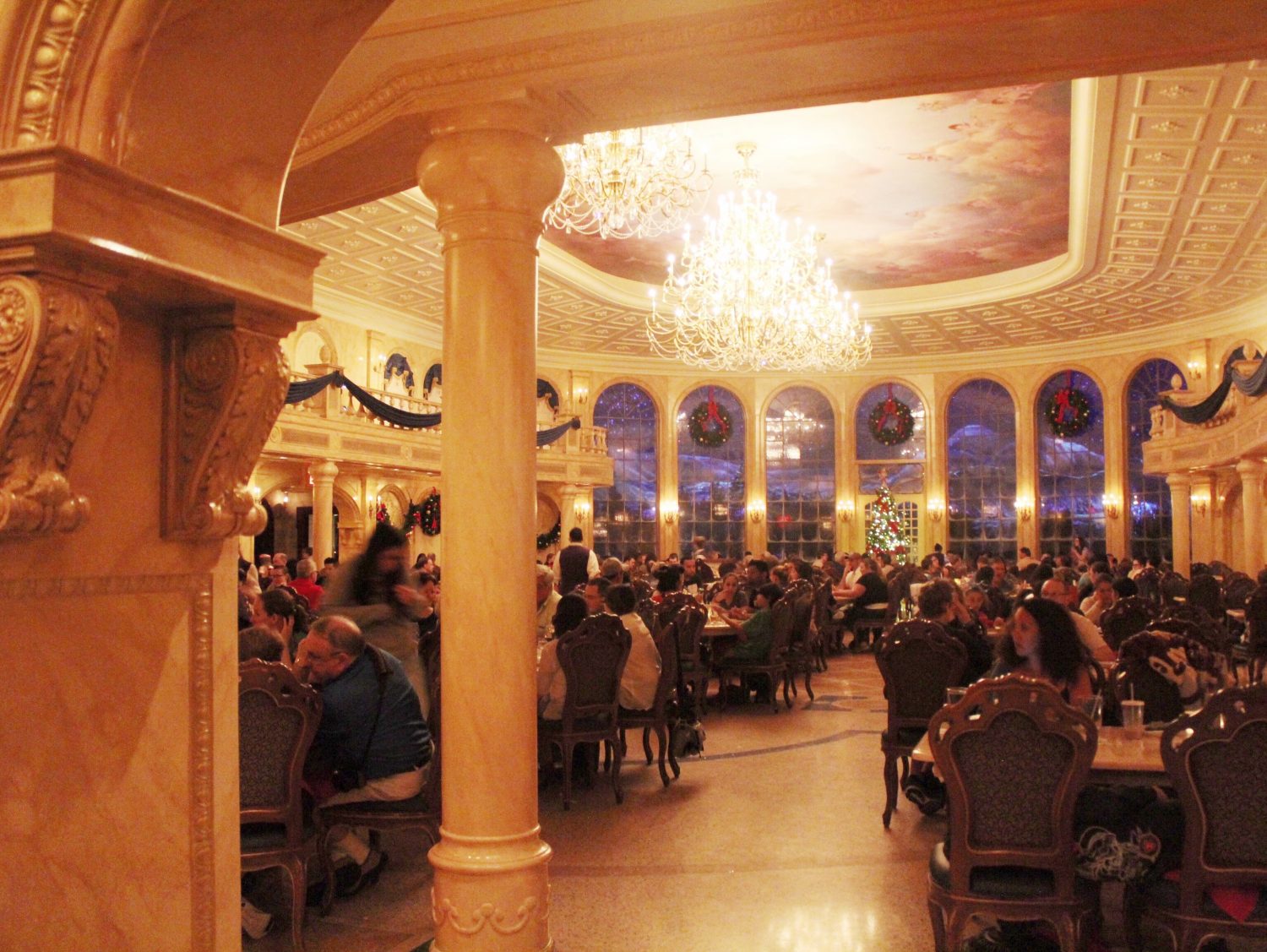 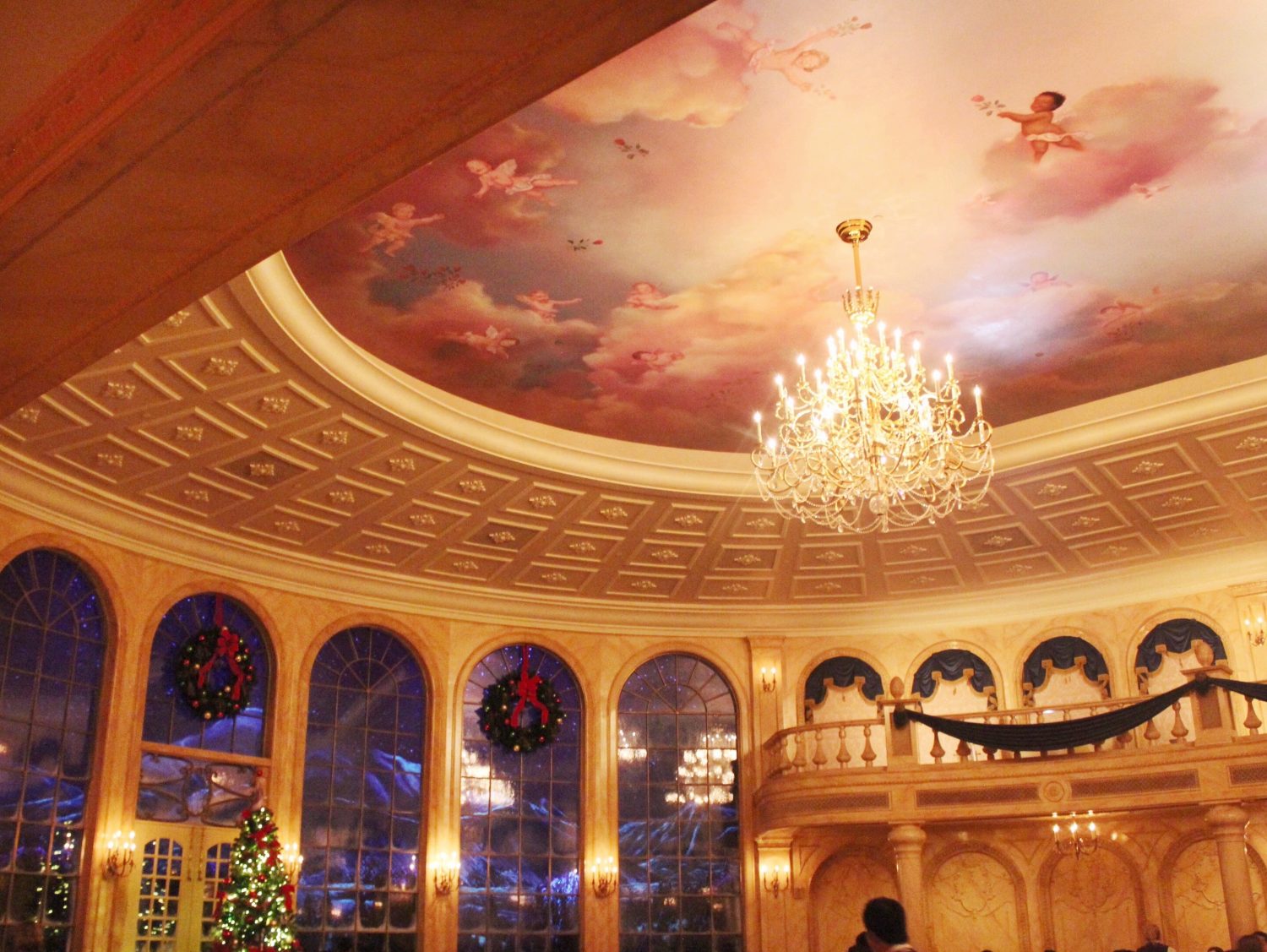 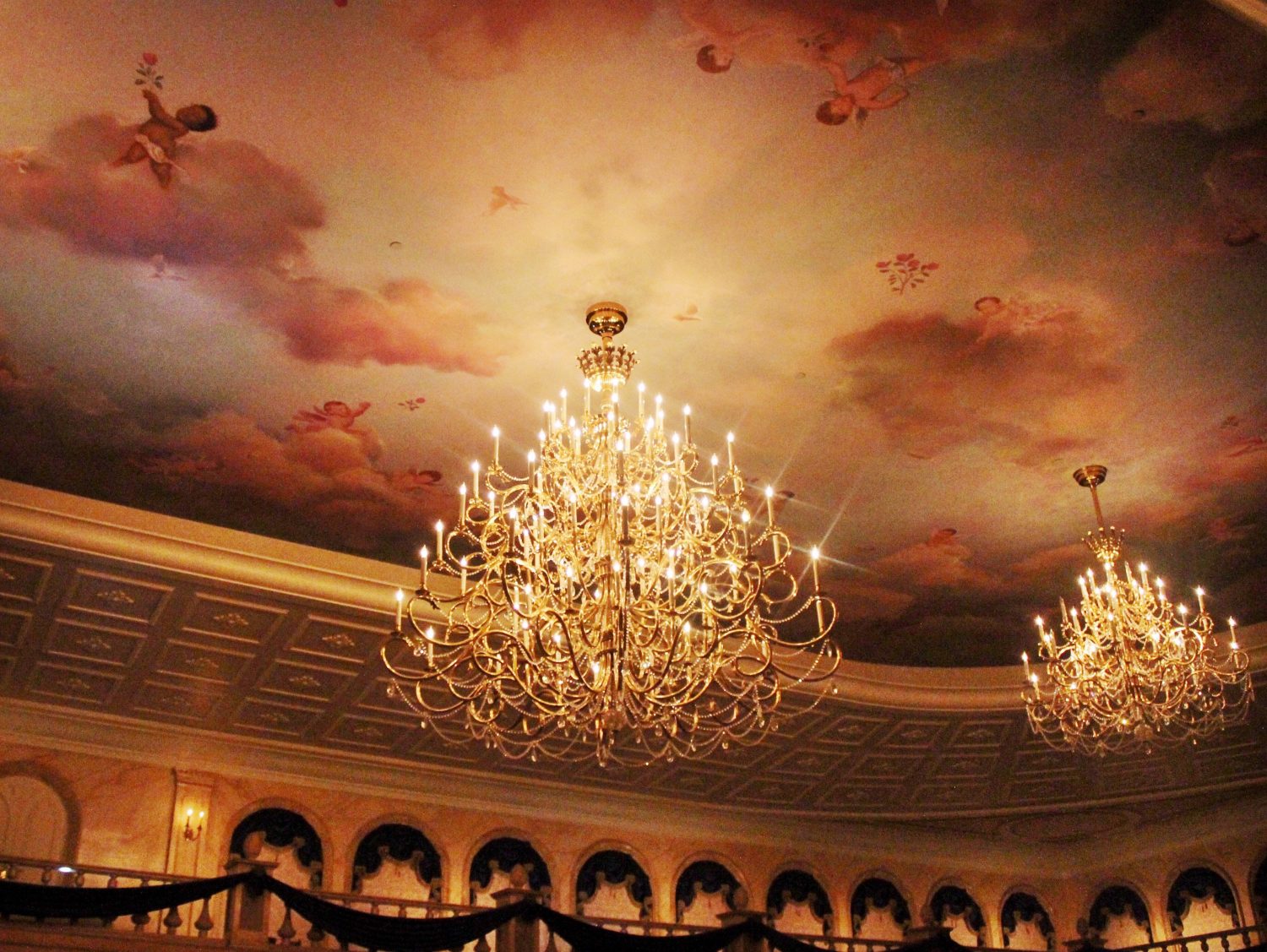 Be Our Guest is separated into three unique dining areas themed after the grand ballroom, the Castle Gallery, and the West Wing. The grand ballroom was so gorgeous with its high, domed ceiling, chandeliers and snow-laced Gothic arches. It looked exactly like the ballroom where the Beast and Belle had their famous dance. 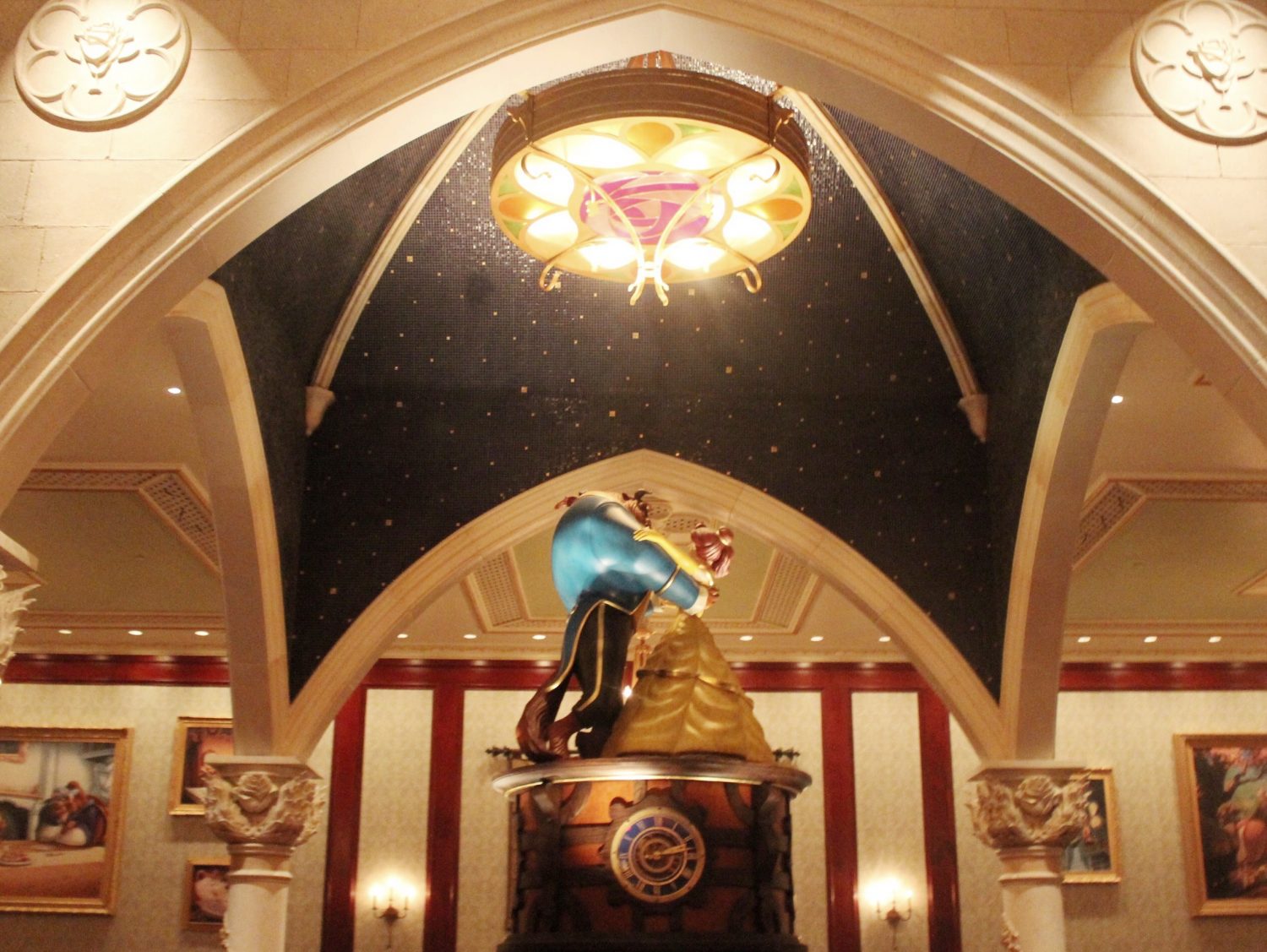 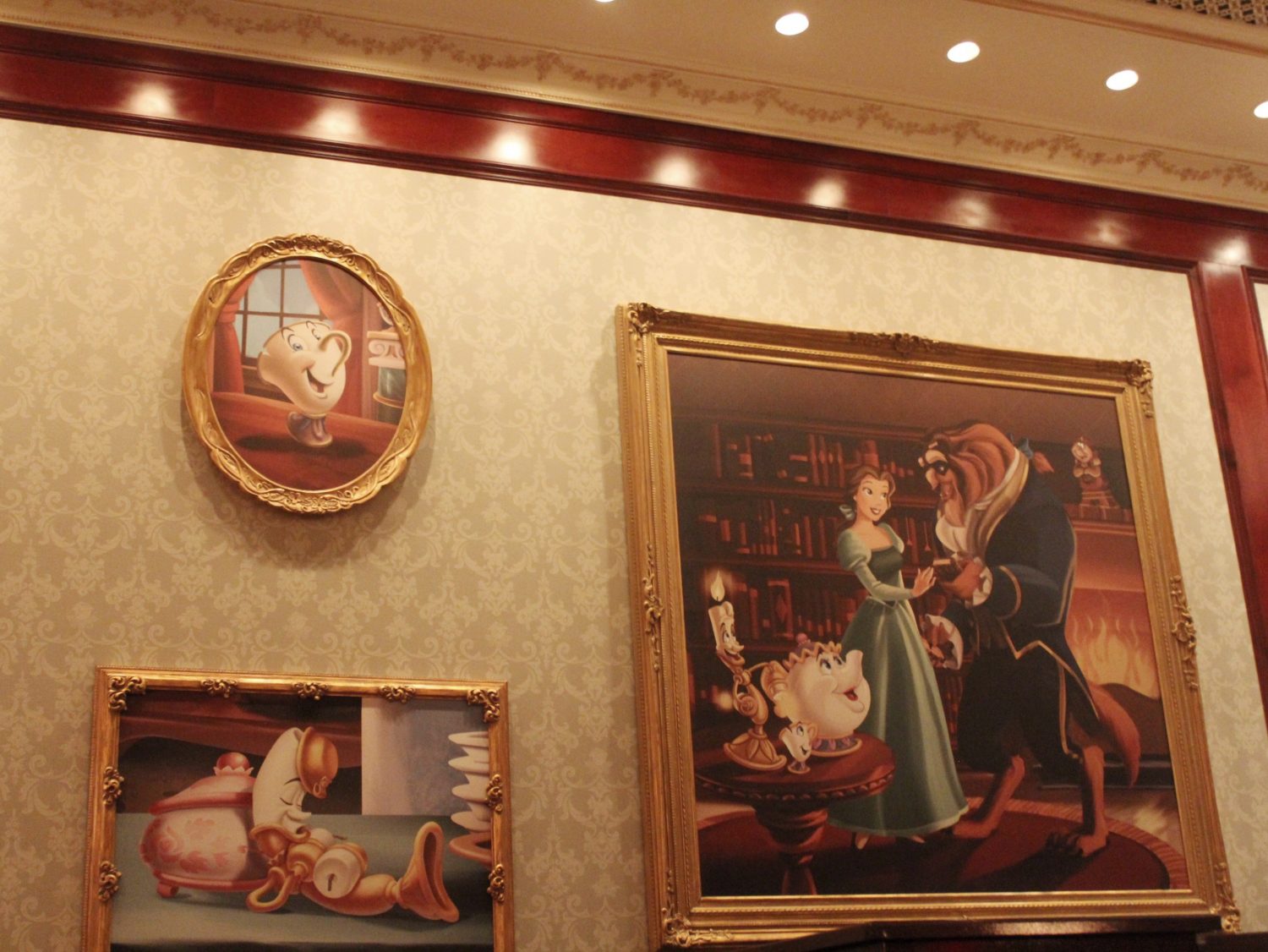 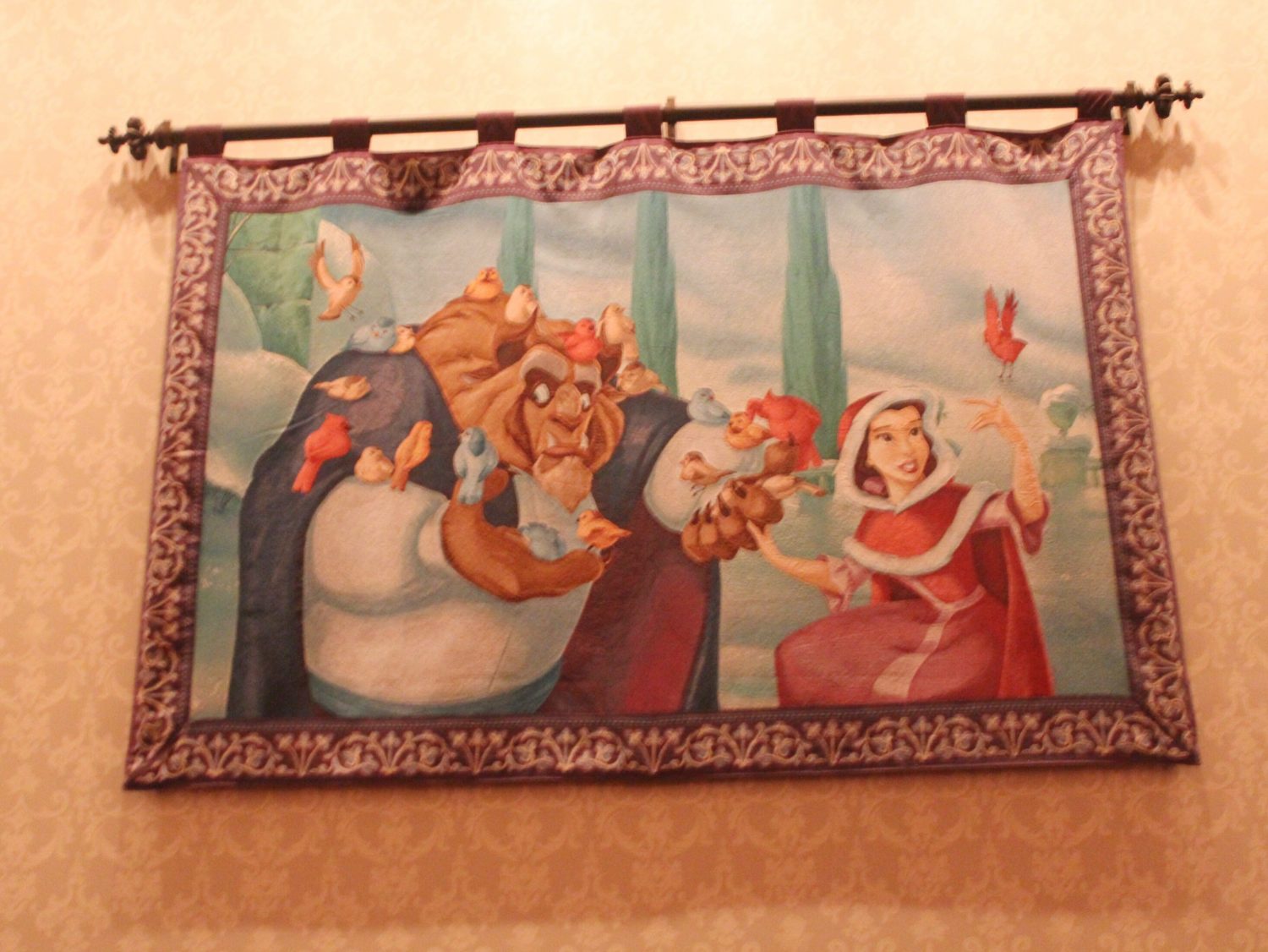 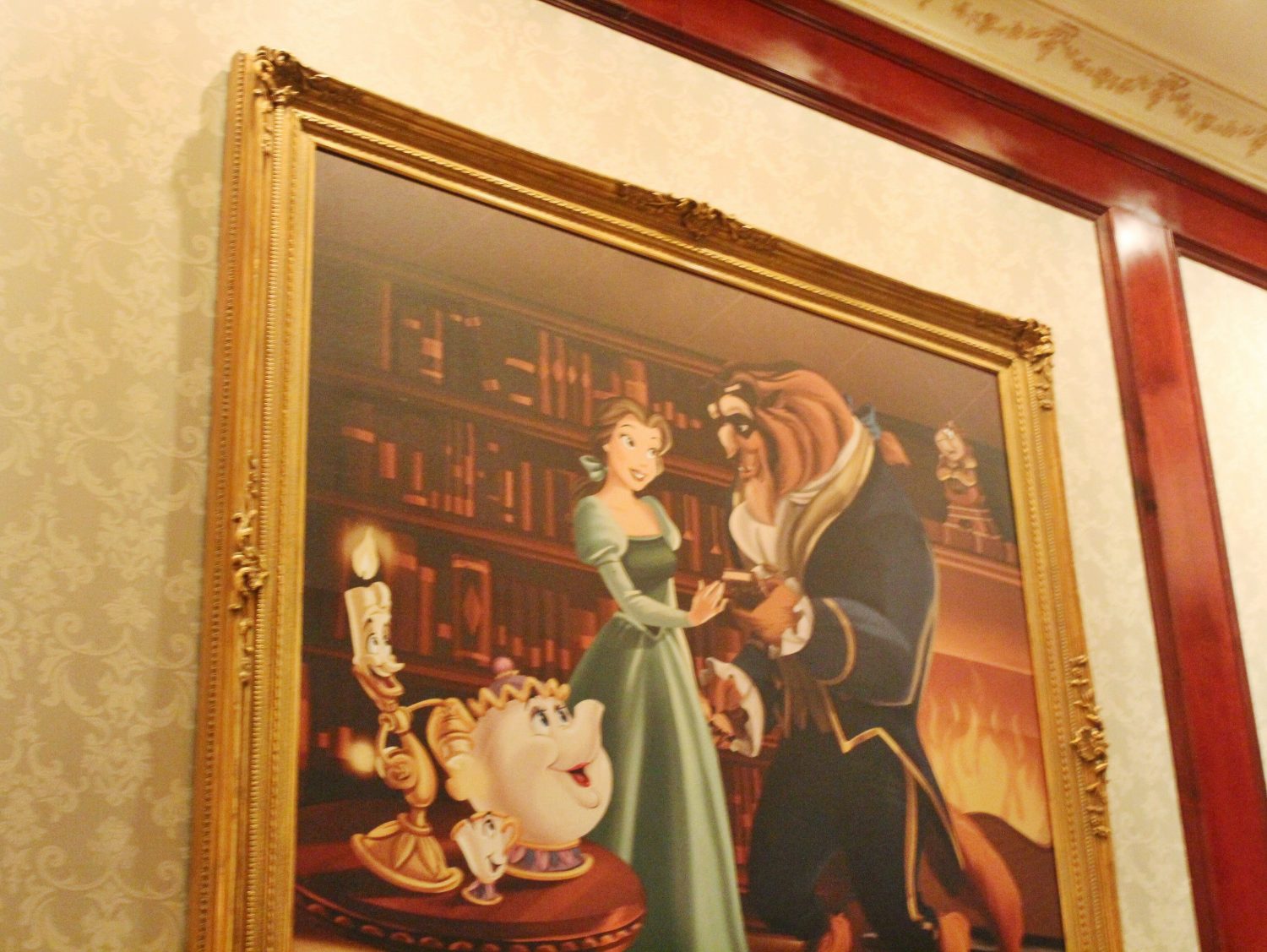 The Castle Gallery is inspired by Belle’s private library and it was absolutely adorable. The walls were completely covered with beautifully framed photos of different characters and scenes from Beauty and the Beast. 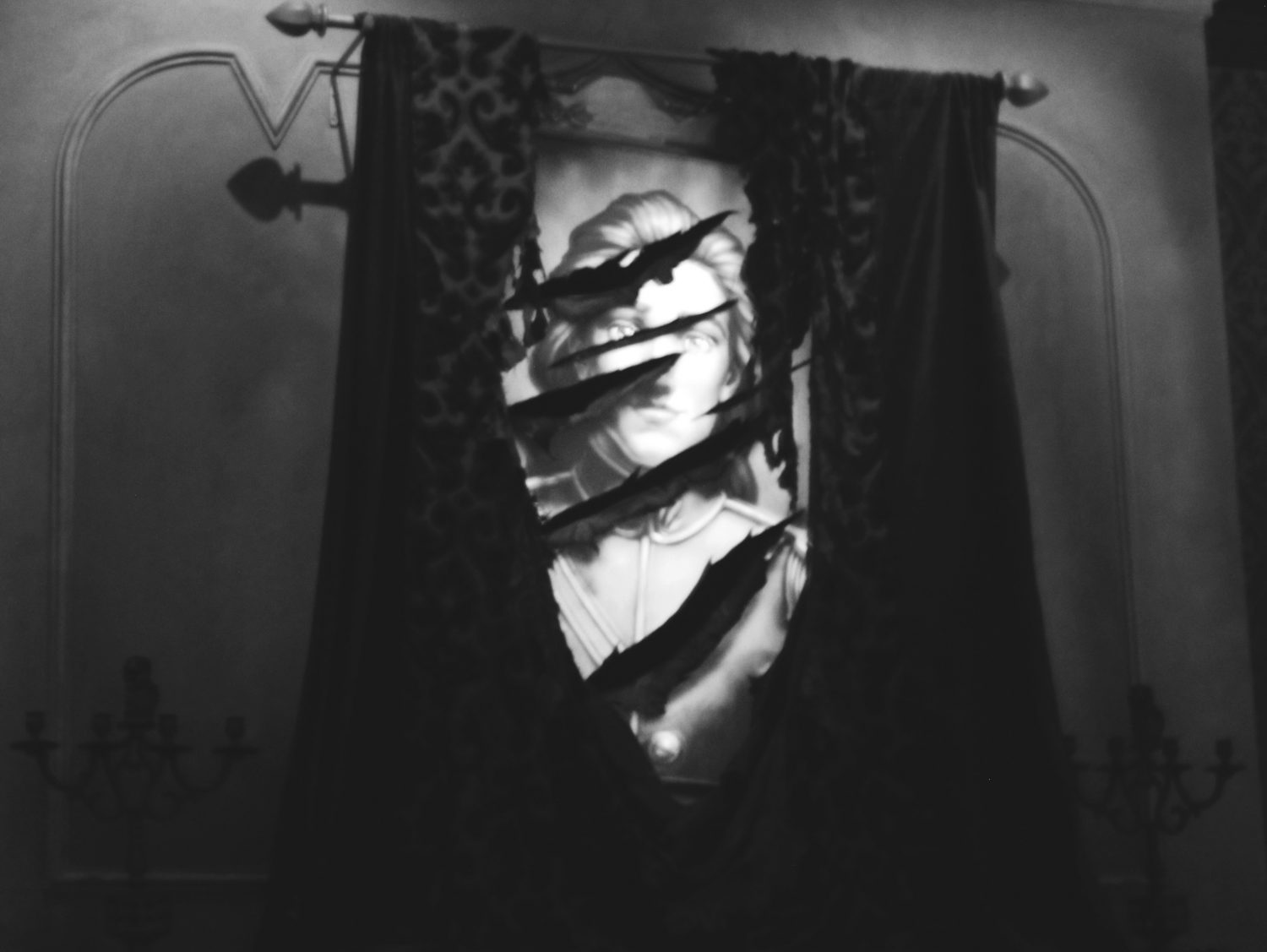 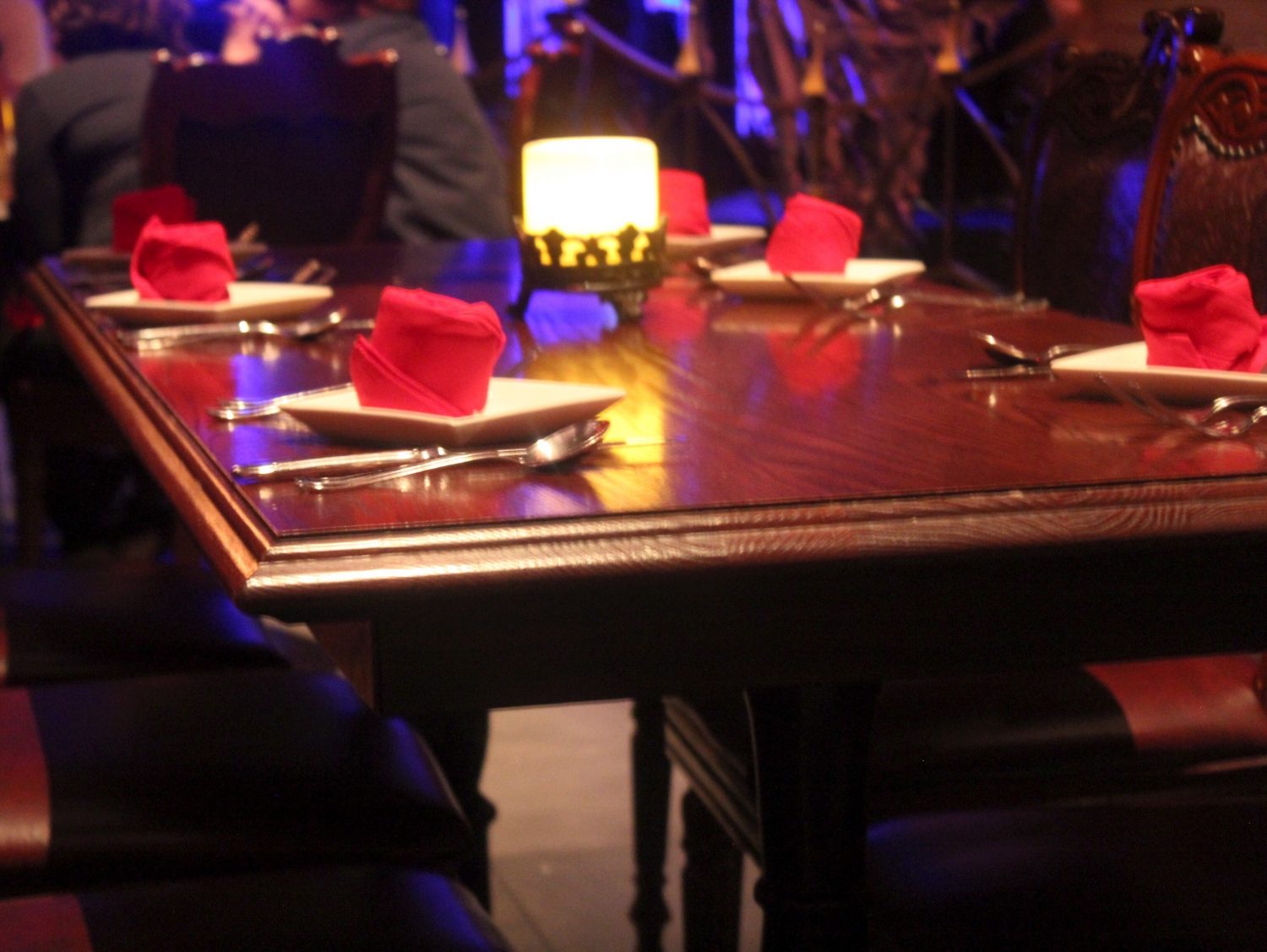 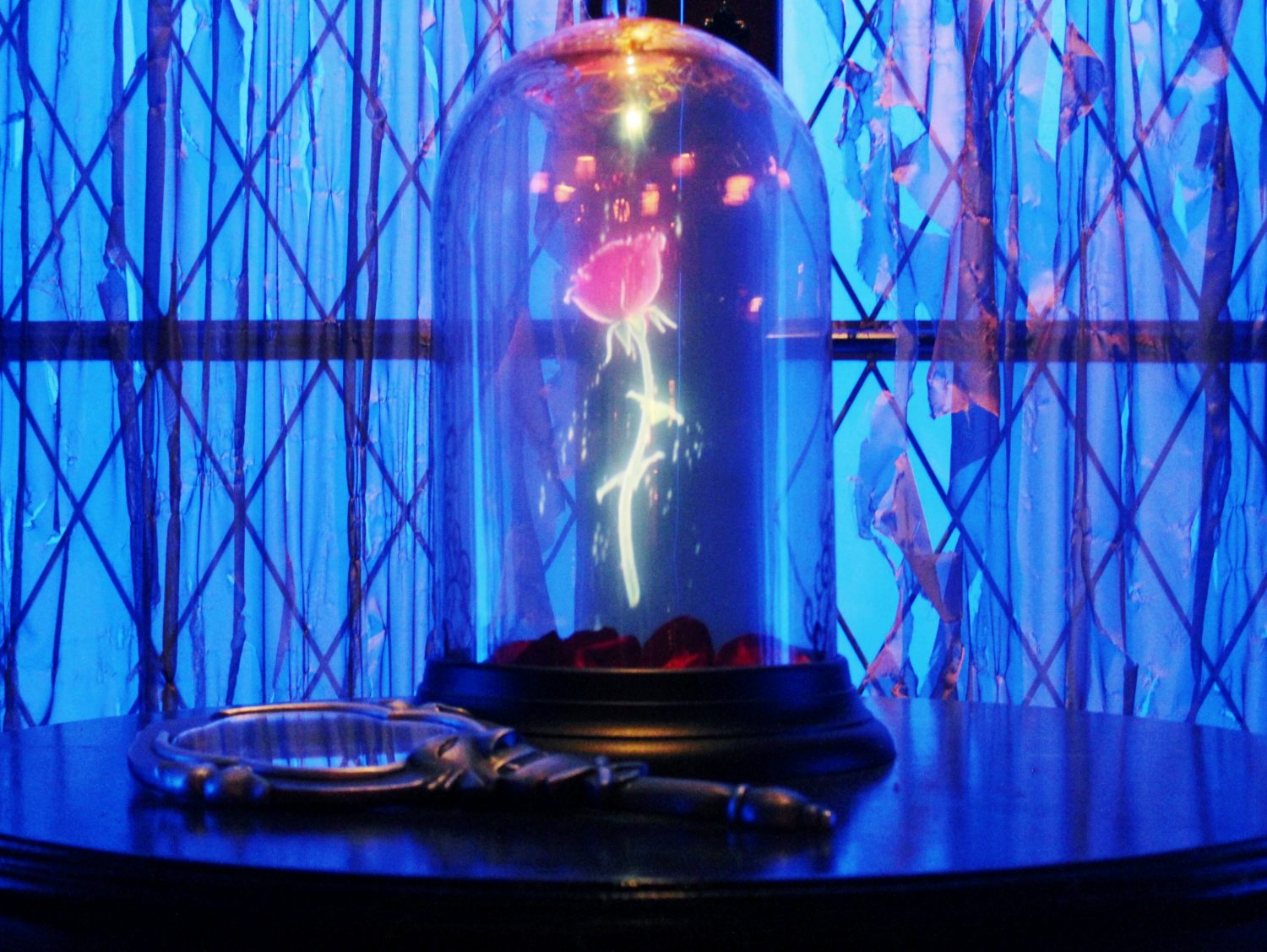 I had dinner in the West Wing, which was AMAZING! The West Wing was dark and creepy and completely awesome. In fact, my table was RIGHT by the Enchanted Rose! Since I ate at Be Our Guest for dinner and it was super dark inside, I didn’t get any good photos of my food (whoops). I do plan on taking better (well lit) photos when I go back in August (since I’ll be dinning there for lunch and it will be better lighting). If I’m being honest the food was just okay, nothing too special, which is a little disappointing since it’s so expensive but the overall theming and dining experience definitely made it worth it (if that makes sense). 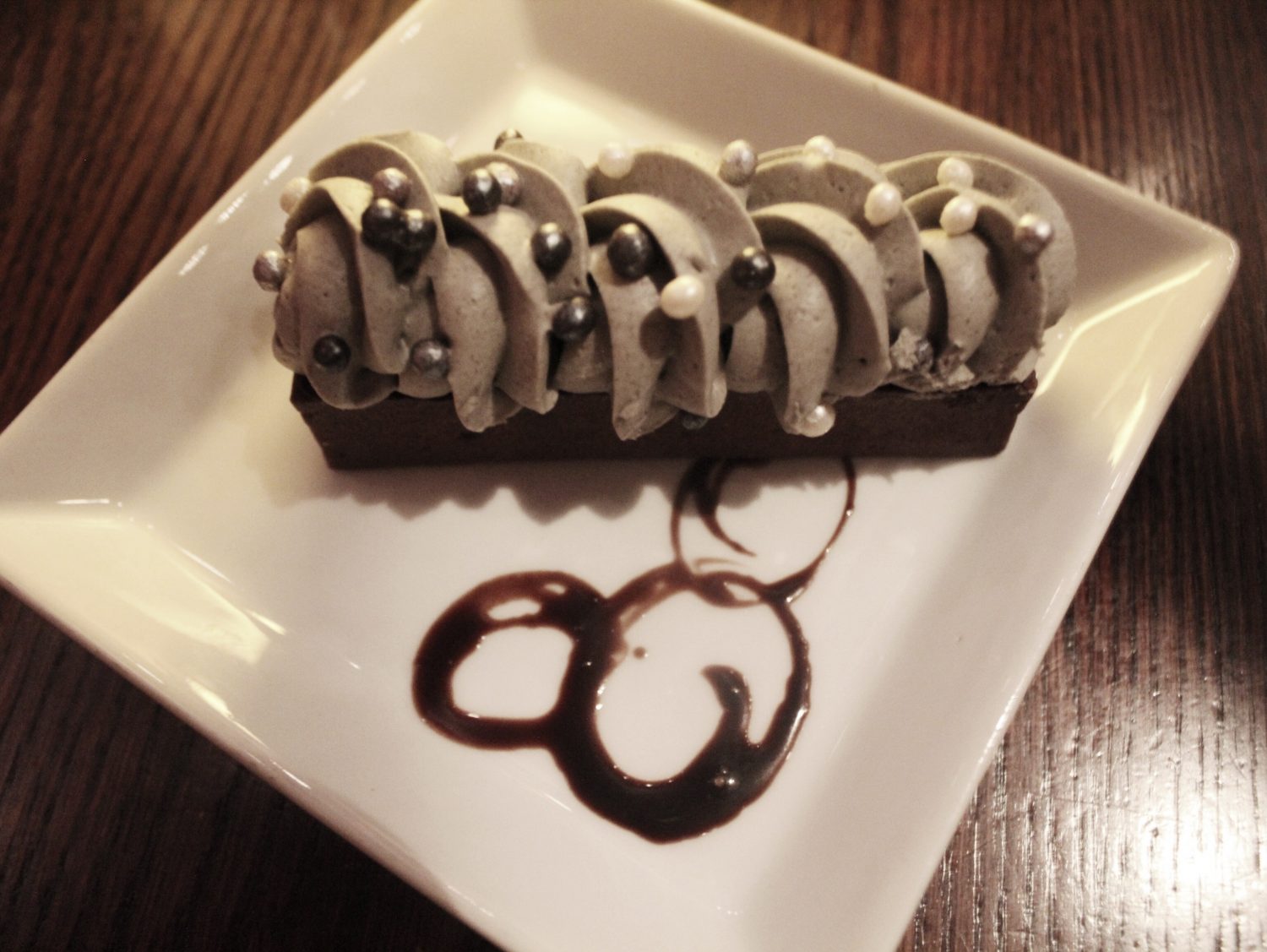 One thing I can rave about was The Grey stuff! Lumiere was right, it’s delicious (don’t believe me, ask the dishes!).