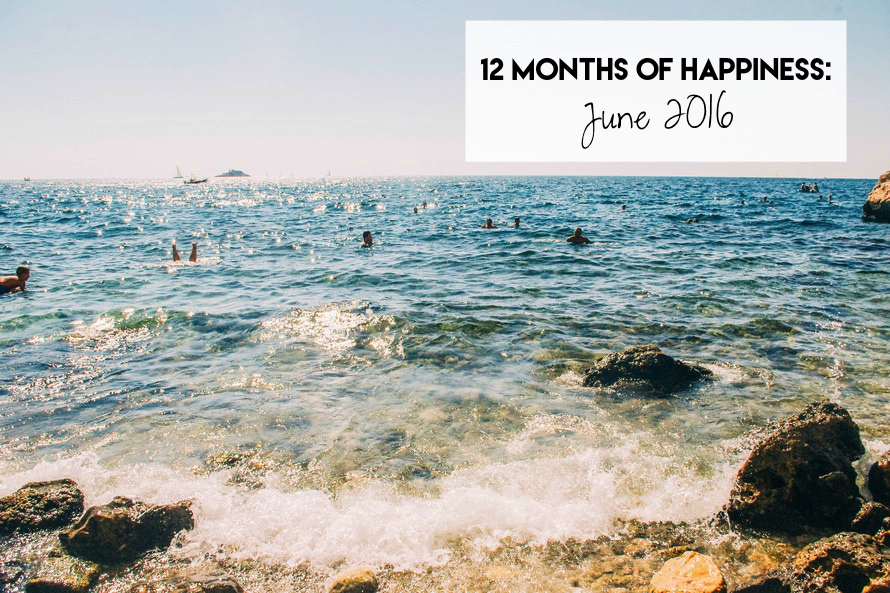 Happy Wednesday (hump day, woot woot) and welcome to the latest installment of my 12 Months of Happiness series! I know I say this almost every month but I really do LOVE this series of mine. It never fails to make me smile when I’m jotting down all the things that made me happy that particular month. I also really love going back to previous 12 Months of Happiness installments and rereading them. Reliving and remembering those past happy moments and memories make me happy all over again! I say this a lot but I seriously believe that happiness is a choice and sometimes it’s not the easiest choice. Sometimes it’s easier to just let the negativity in but trust me, it’s NOT worth it! It’s so important to focus on the positive/happy moments in life. Here are some of the things that made June an amazing month: (Don’t forget to comment down below how your June went and what things made you smile this month! I LOVE hearing from you guys about what makes you happy!)

One of my FAVORITE things about summer is having picnics! There’s just something so fun about eating, reading and relaxing outside in the fresh air (especially since the weather has been so beautiful in Chicago!). I got the most adorable rainbow striped picnic blanket last month (you gotta love the summer section at Target) so I decided to finally break it in by having a little impromptu pup-peroni picnic with Loki! I packed a few snacks for me and a TON of toys and treats for Loki and we spent the whole day outside playing (and eating of course!). It was seriously one of the best days ever. I can’t wait to have even more picnics (especially with Loki) this summer!

Words can’t describe how much I LOVE my city. Although I LOVE Chicago year round, there’s just something about summertime in Chicago that just makes me smile. There’s always some event or festival going on in the city or some new restaurant to try out or a comedy show to go see. It’s the BEST! My latest obsession has been the new Centennial Wheel at Navy Pier. It’s 10 times better than the old Ferris Wheel and the views of the Chicago skyline from the top are just breathtaking!

If you’ve been following this blog for awhile, or follow me on Instagram or Twitter, than you already know how much I LOVE Broadway. In fact, after Disney Broadway is my absolute FAVORITE thing. This month I was able to score Hamilton tickets for October (the show opens in Chicago next month) and I’m so excited that I get to cross it off my Broadway bucket list. Speaking of my Broadway bucket list, although last year I was able to cross off “see at least one Broadway show a month” (I ended up seeing 13 shows in 2015), this year I’ve been a little off my Broadway game. It’s June and I’ve only seen two shows this year (insert crying emoji!). This month I decided to make up for lost time! Tonight I’m seeing The SpongeBob Musical (which made it’s pre-Broadway debut in Chicago last week) and on Friday I’m seeing Newsies (again!).

Here’s a few other things that made me happy in June:

I can’t believe Friday is July?! What made you happy in June?
Make sure to check out the entire 12 Months Of Happiness series HERE!