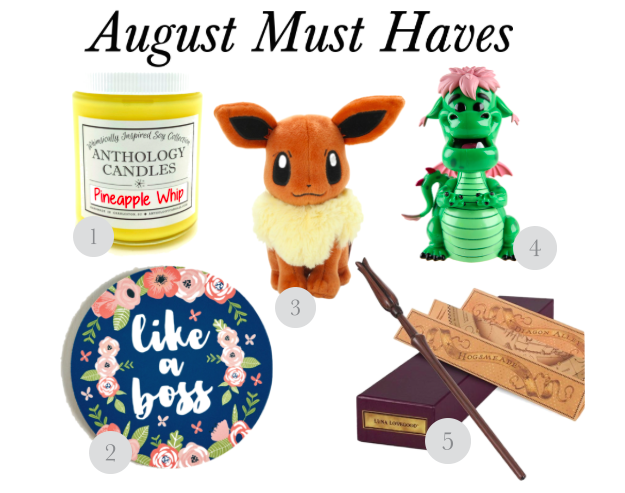 It’s August, which means new month, new Must Have list! I’m super excited that it’s FINALLY August because I’m heading to Disney World (and Universal Studios Orlando) in nine days (hooray)! Like always, these are not necessarily items that I, or anybody, “need,” it’s just a list of things I currently have my eye on. Here are my Must Haves for August:

1. Pineapple Whip Candle. It seems like just about everyone is obsessed with Anthology Candles (I’ve been wanting to try them out for the longest time) so maybe it’s time for me to finally give them a shot? I LOVE Dole Whip (Disney World countdown: NINE DAYS) so I definitely want to try their “pineapple whip” candle first!

2. “Like a Boss” Mouse Pad. Okay, how adorable is this mouse pad? Oddly enough, I NEVER use mouse pads but I think this one would go perfect with the theme/decor in my little home office.

3. Eevee Plush. Raise your hand if you’re also obsessed with Pokemon Go! Eevee is, and will forever be, my favorite Pokemon (sorry Pikachu). While I have several Pokemon plushies already, I (shockingly) don’t own an Eevee one.

4.  Elliott Funko Pop. I can’t wait for Pete’s Dragon to come out later this month (did you know some people DIDN’T know it was a remake/weren’t aware of the original film!?! How is that possible?!!) .

What’s on your must have list this month?
*You can check out more Monthly Must Have lists HERE*