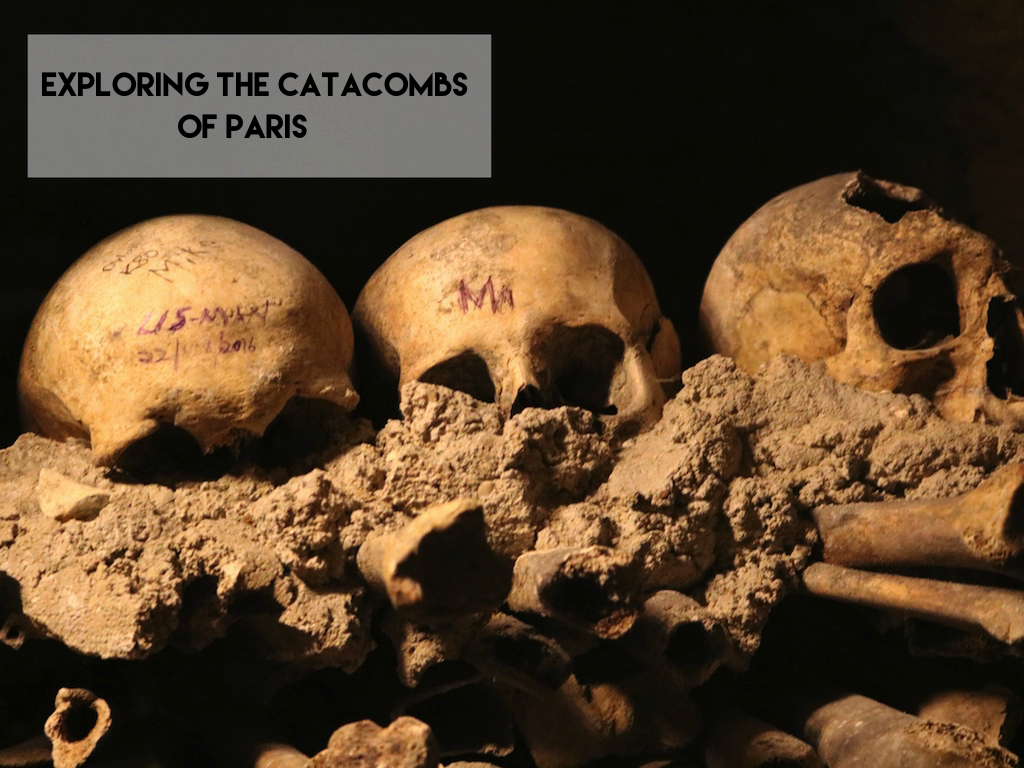 Happy Friday everyone! I know my blogging schedule has been a little (okay, a lot) “off” this year but what can I say, 2017 has been crazy you guys (and it’s only been two months?!). Don’t get me wrong, it’s been crazy in a GOOD way. Although I’ve been super sick (seriously, I don’t think I’ve been this sick in my life) for the past, what seems like, two/three weeks, 2017 has already been filled with so much awesome news and a bundle of amazing new opportunities for both me and my blog. I’ve also been in the process of planning some fun new trips (for possibly 2018). Ever since my trips to Paris last year, I’ve been itching to go on more international trips! Speaking of Paris, when I first visited Paris last spring (April), there were a few places that I really wanted to check out but due to timing and other issues, I just didn’t get a chance to visit them. One of the places that I really wanted to visit was the Catacombs of Paris so I made sure to make it a priority when I visited Paris again in December. I’d heard so many interesting things about the Catacombs of Paris and how it was a place you “had to experience in person to understand.” 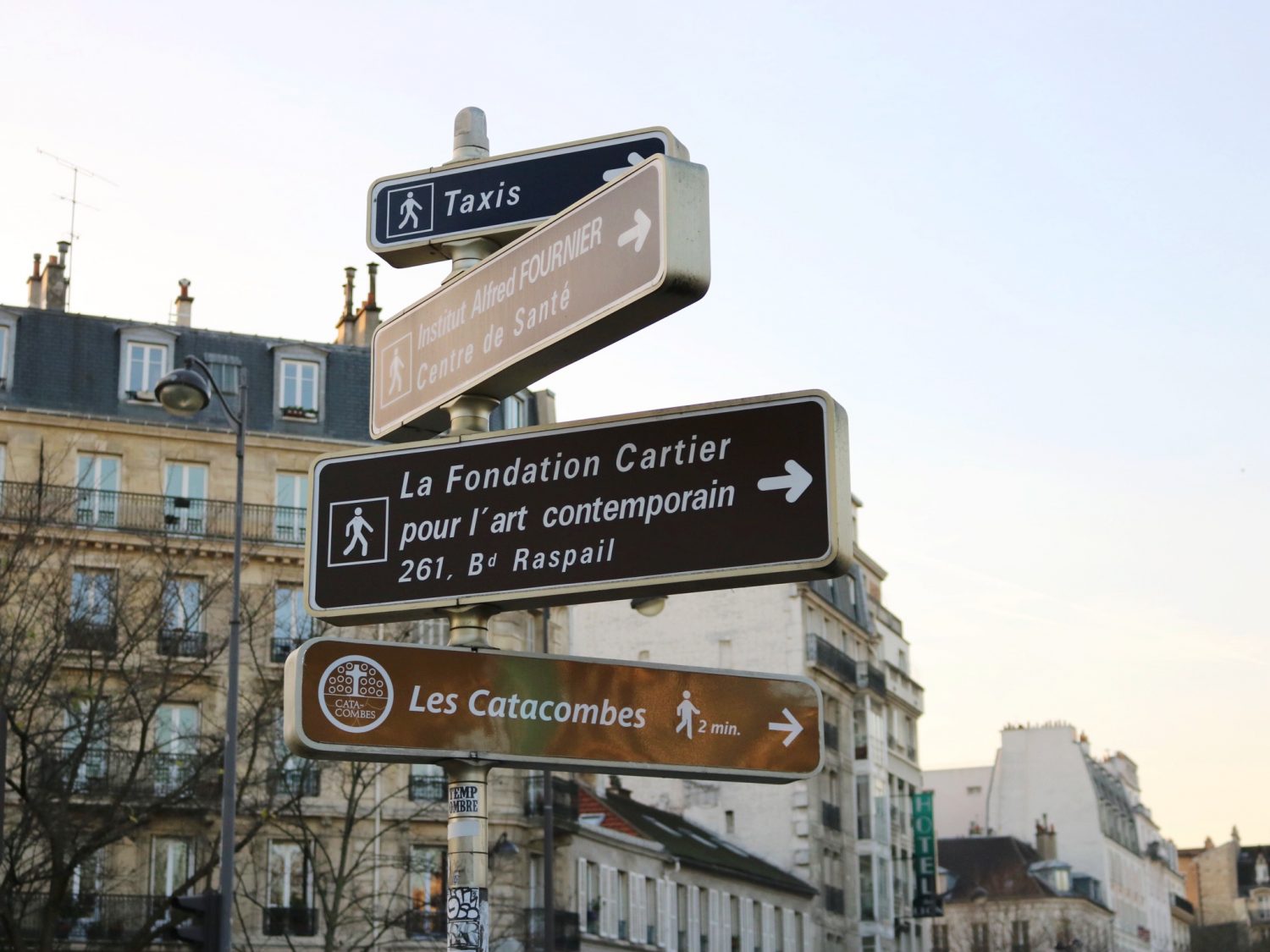 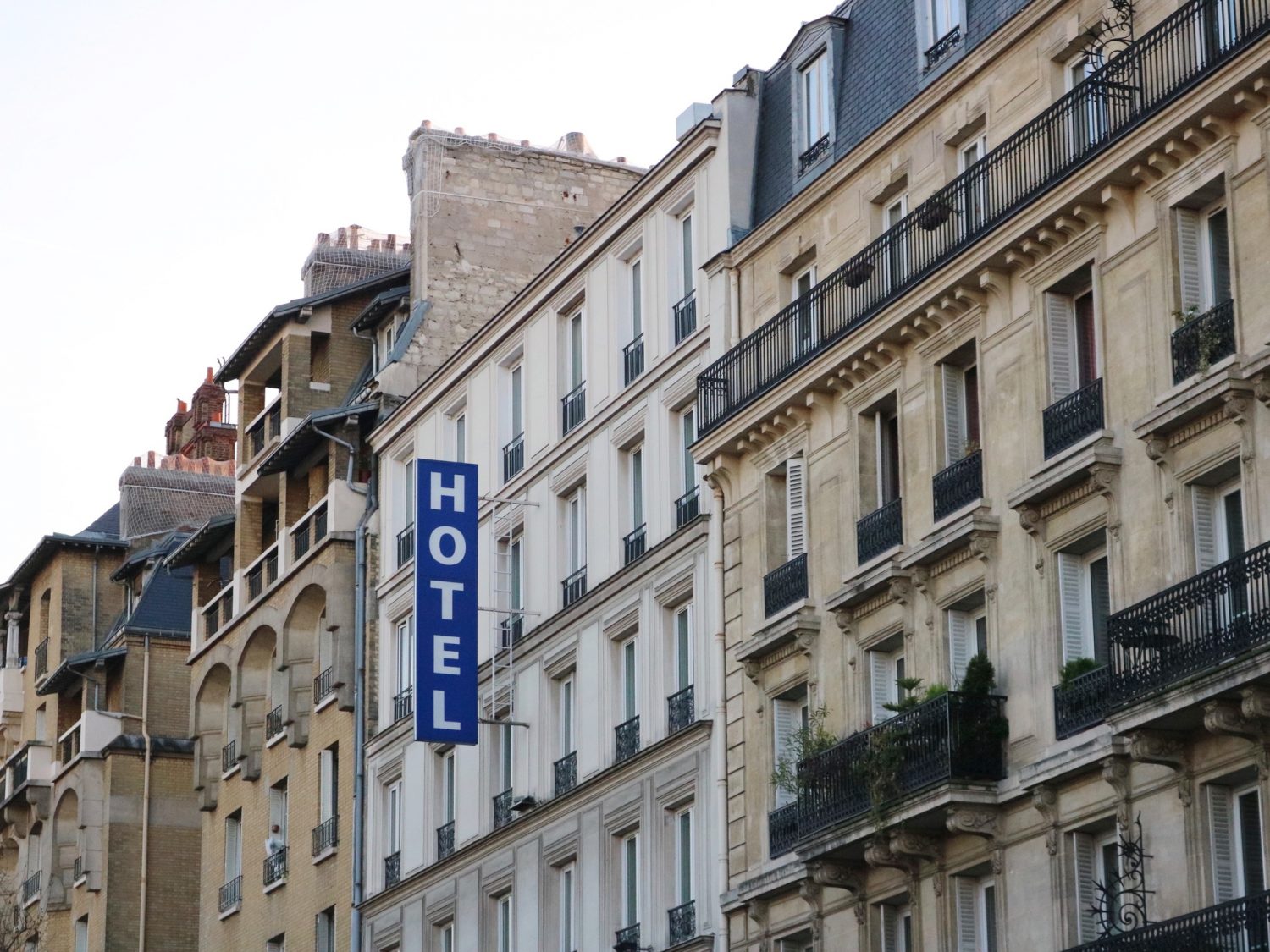 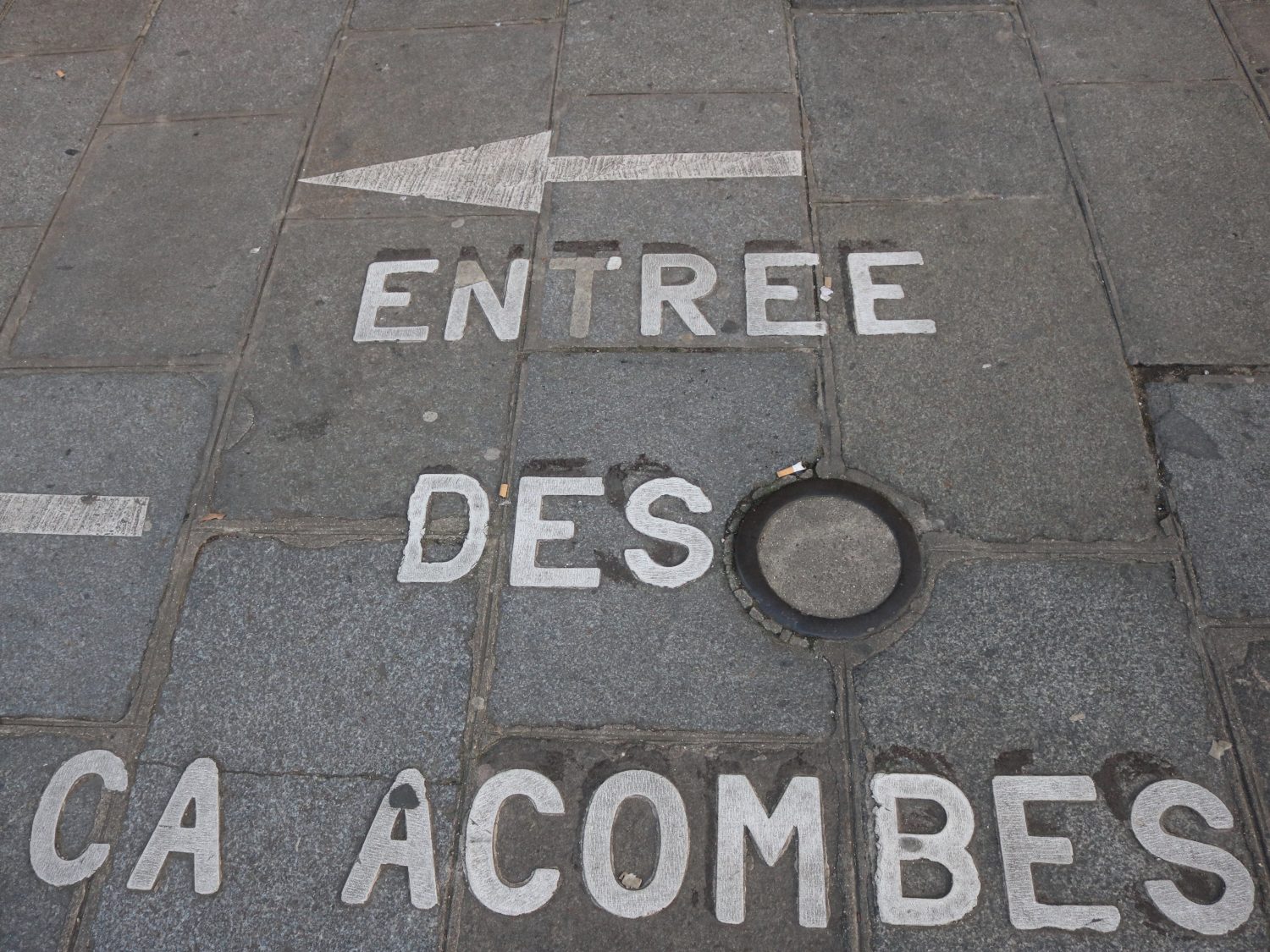 One of the things that I kept hearing about the Catacombs from different people was that if you wanted to avoid waiting 2+ hours to enter it, either arrive super early in the morning when it first opens or late at night when it’s about to close. Now, I went in December so it was pretty cold in Paris that day so I thought “no one is going to wait outside (yes, you wait outside) for that long just to see the Catacombs.” Boy was I wrong. I arrived at the Catacombs of Paris around 4:30pm and didn’t actually get to enter the catacombs until 7pm. Yup, I waited 2 1/2 hours outside during the winter time (although, in my opinion it wasn’t that cold in Paris during December) but it was worth it, in my opinion. Although, once it hit around 6pm and it started to get dark out and a little bit colder, I did contemplate getting out of line and leaving but since I had already waited over an hour, I decided to just stick it out. My mom and I kept joking that we waited in line longer for the Catacombs then we did any Disney ride. 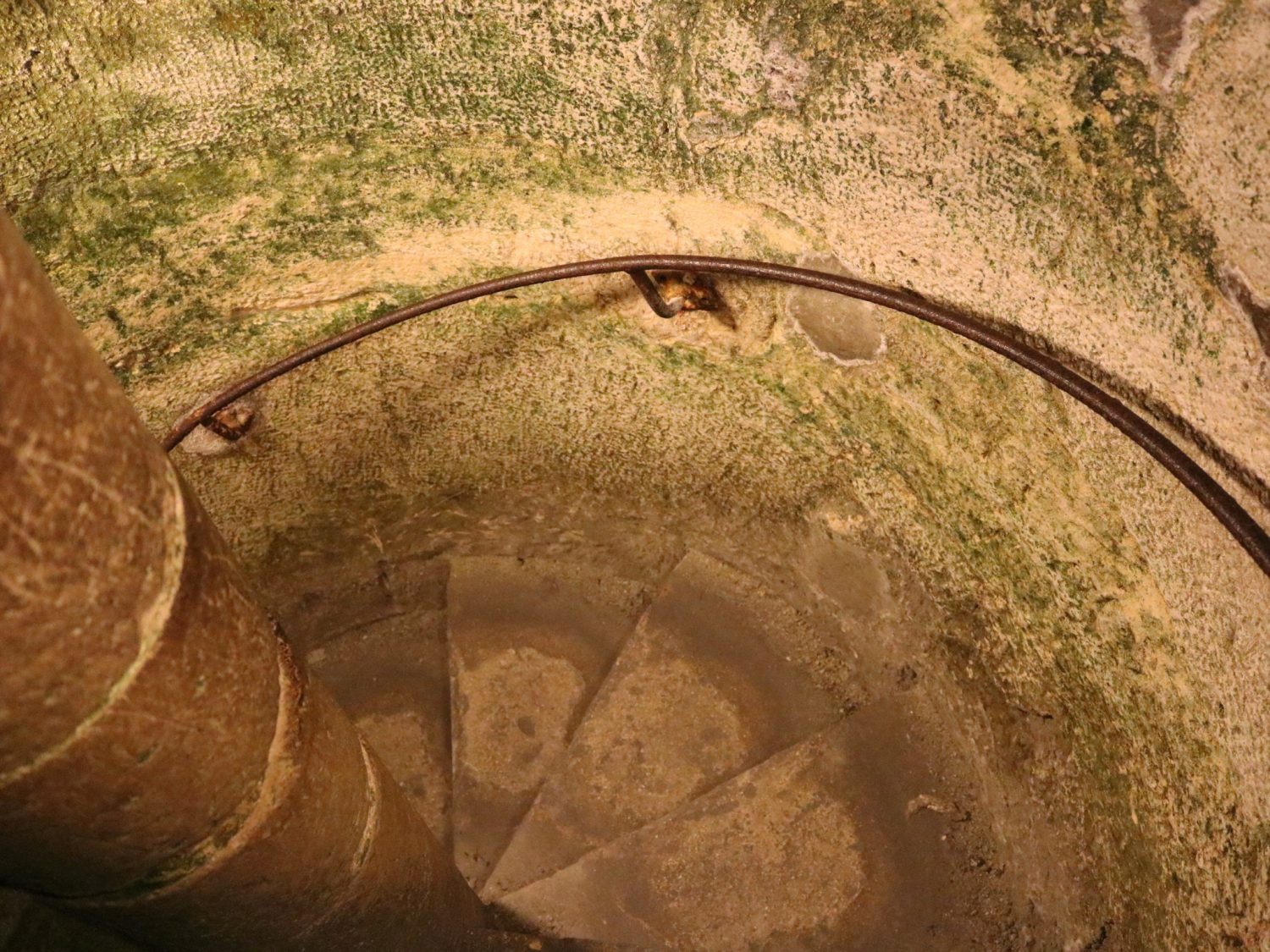 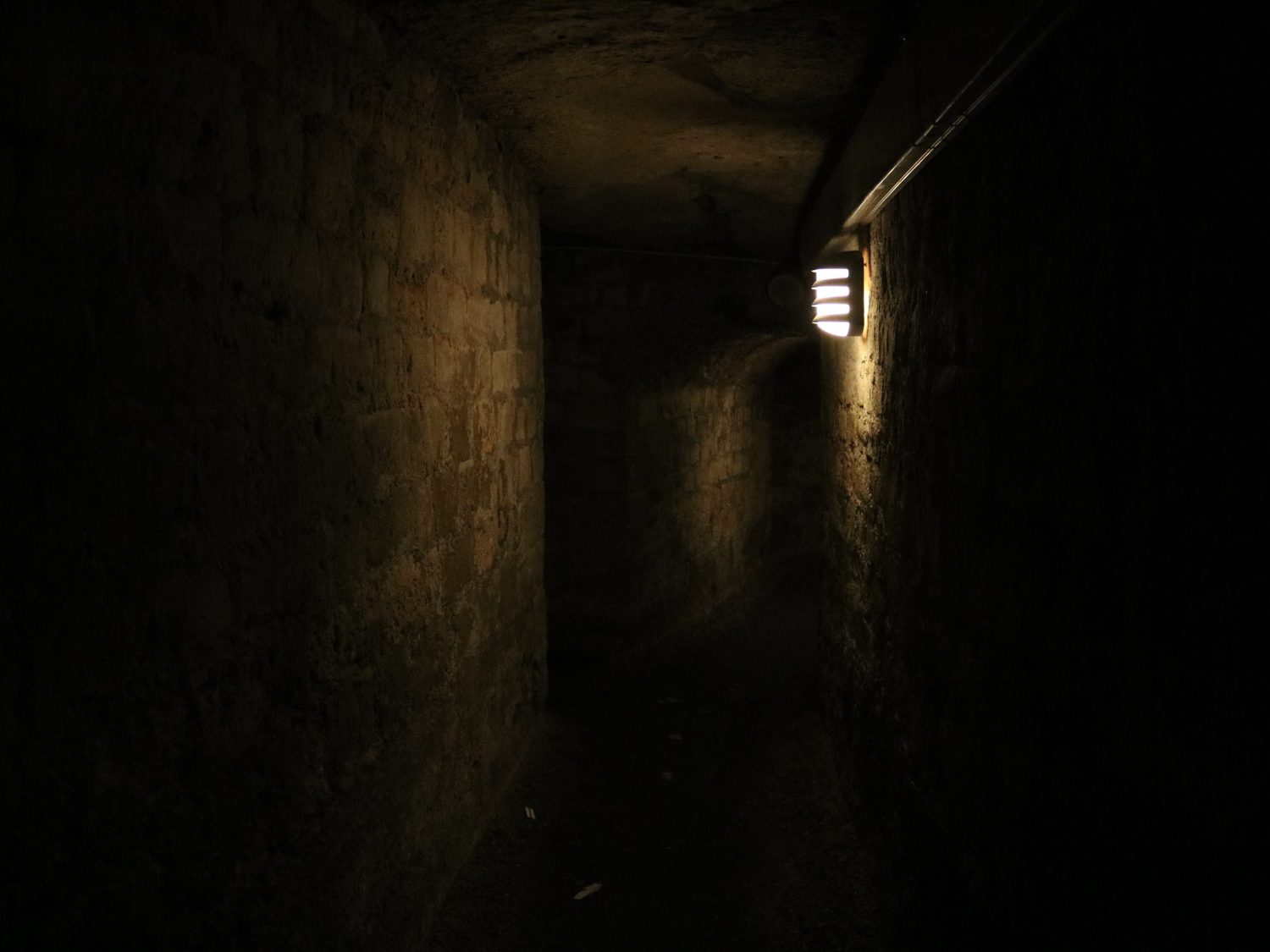 When you first enter, you have to take a (long and narrow) stairwell and a (long and dark) hallway down until you actually reach the Catacombs. Depending on how fast the people in front or behind you are walking, there are several moments were you are in the catacombs completely alone (which was spooky and definitely added a “creepy” factor). 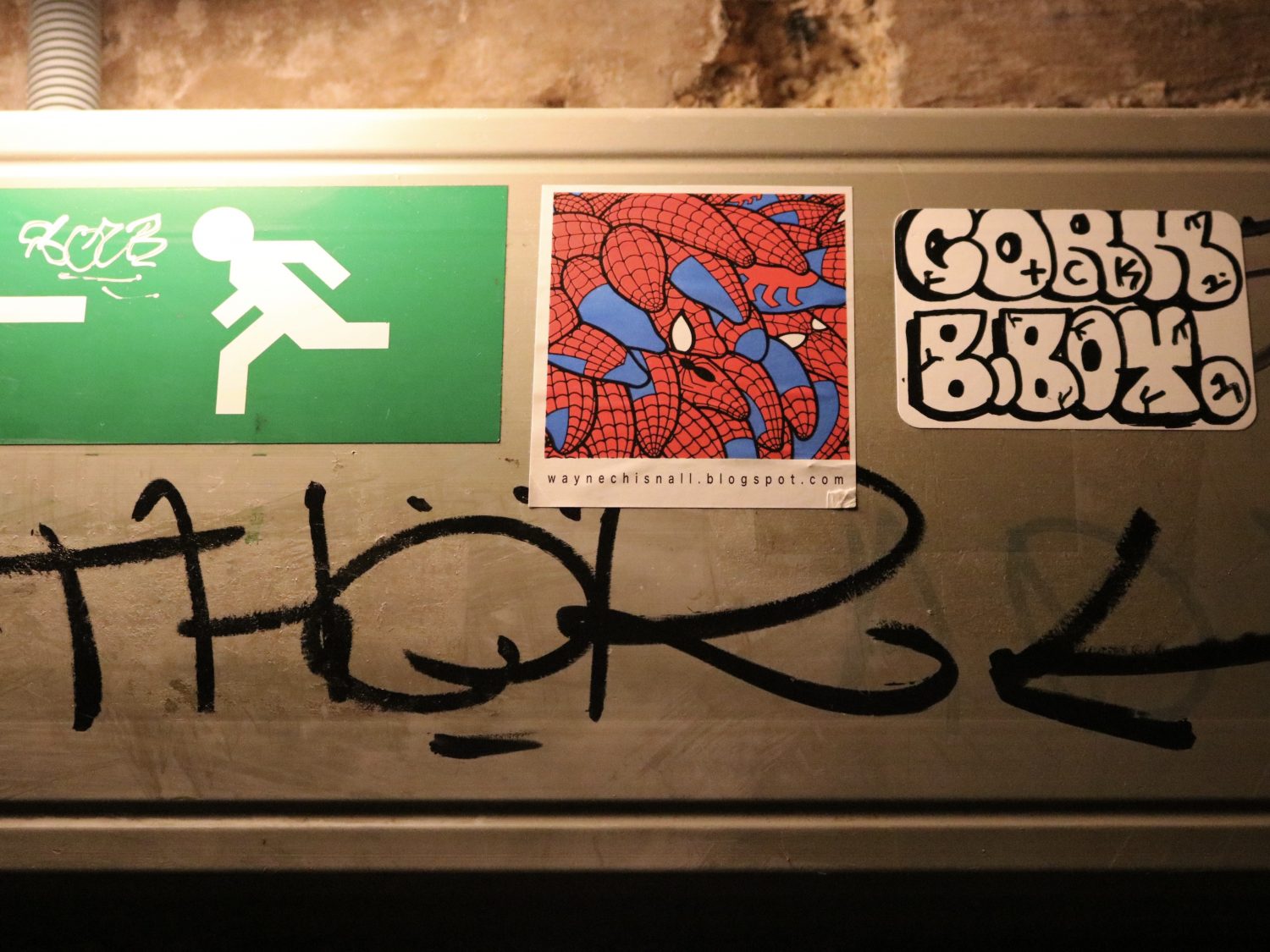 In one of the hallways leading to the Catacombs, there were tons of stickers and graffiti (which is so disrespectful in my opinion) all over the walls. 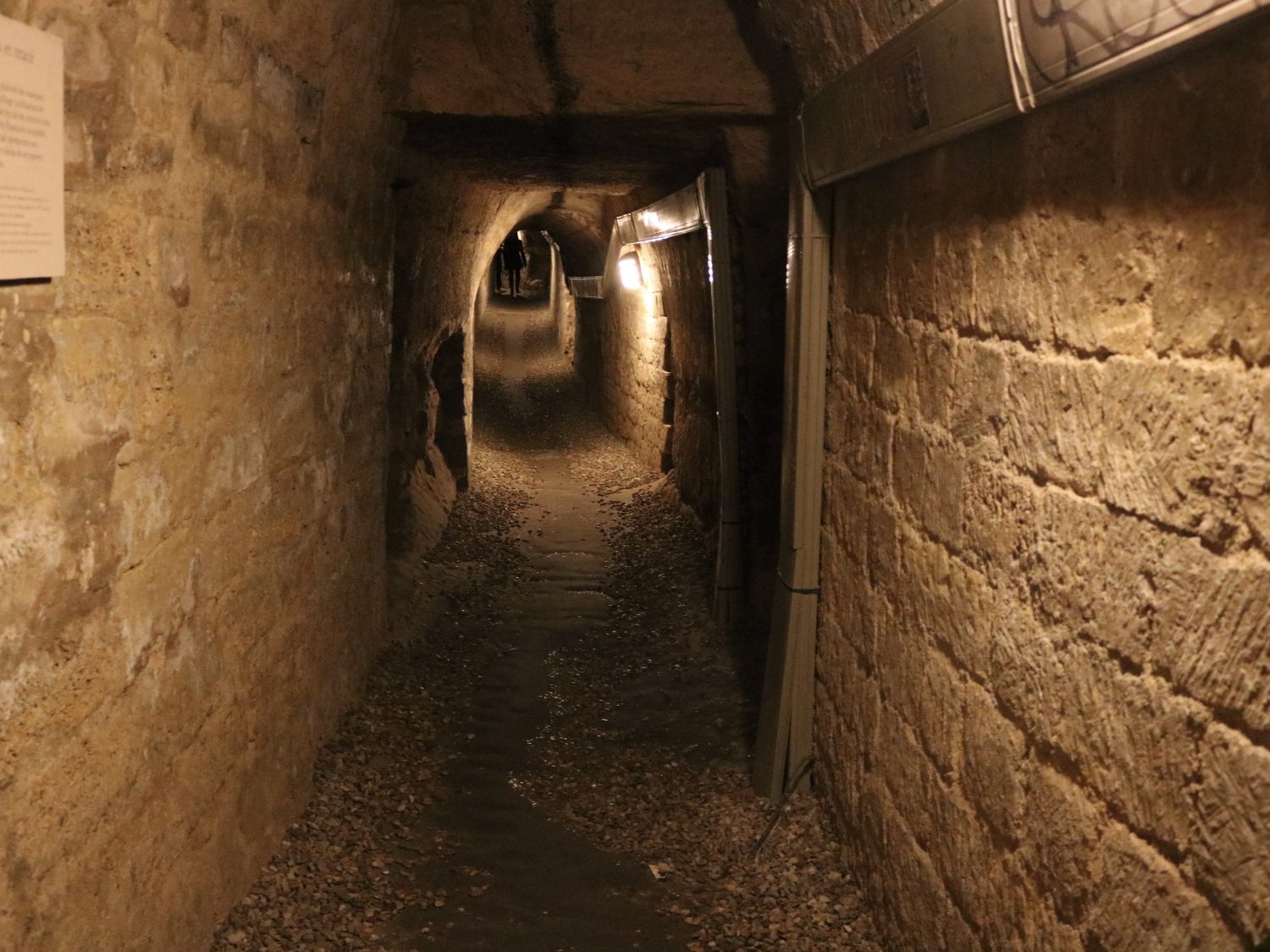 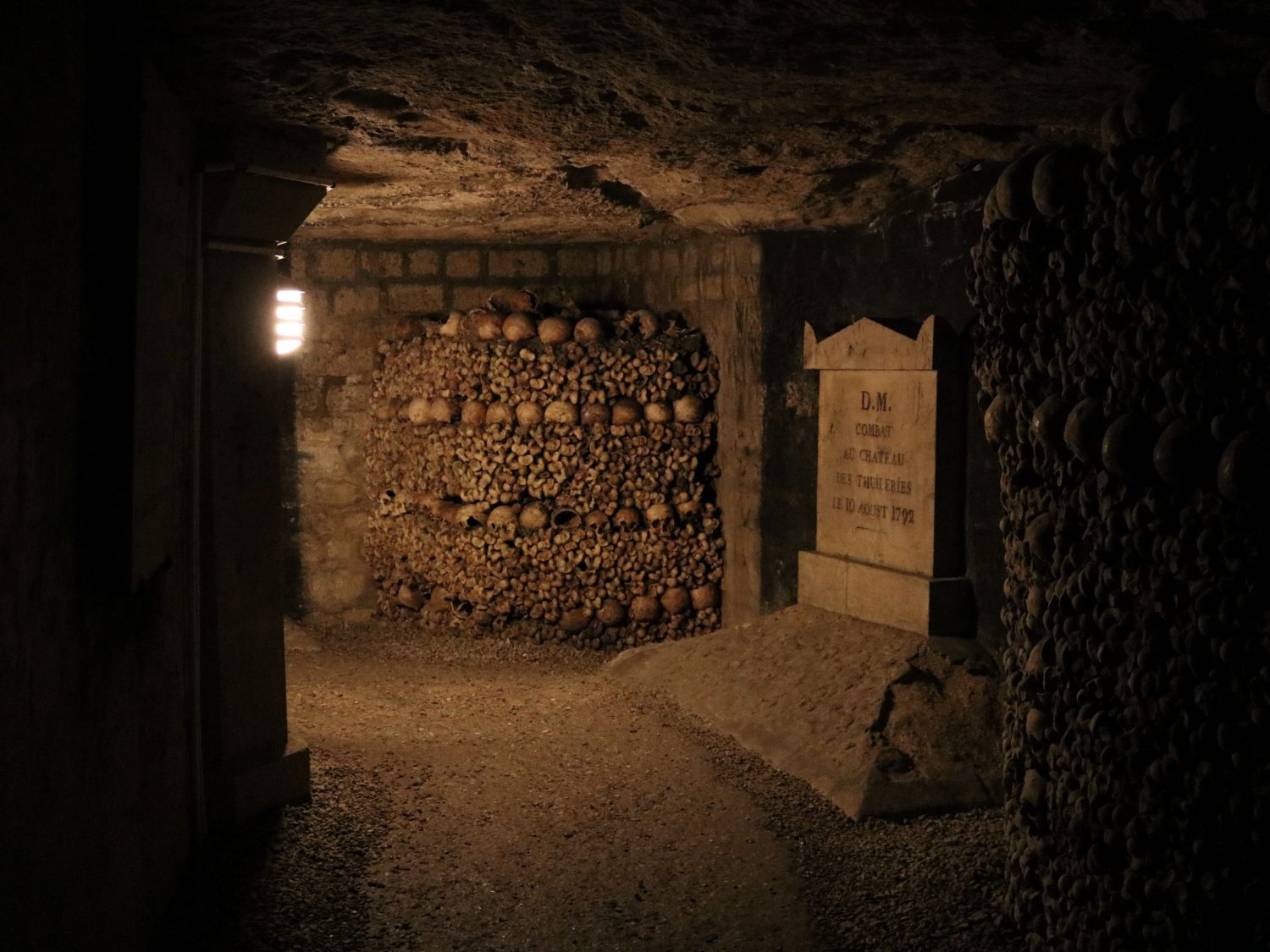 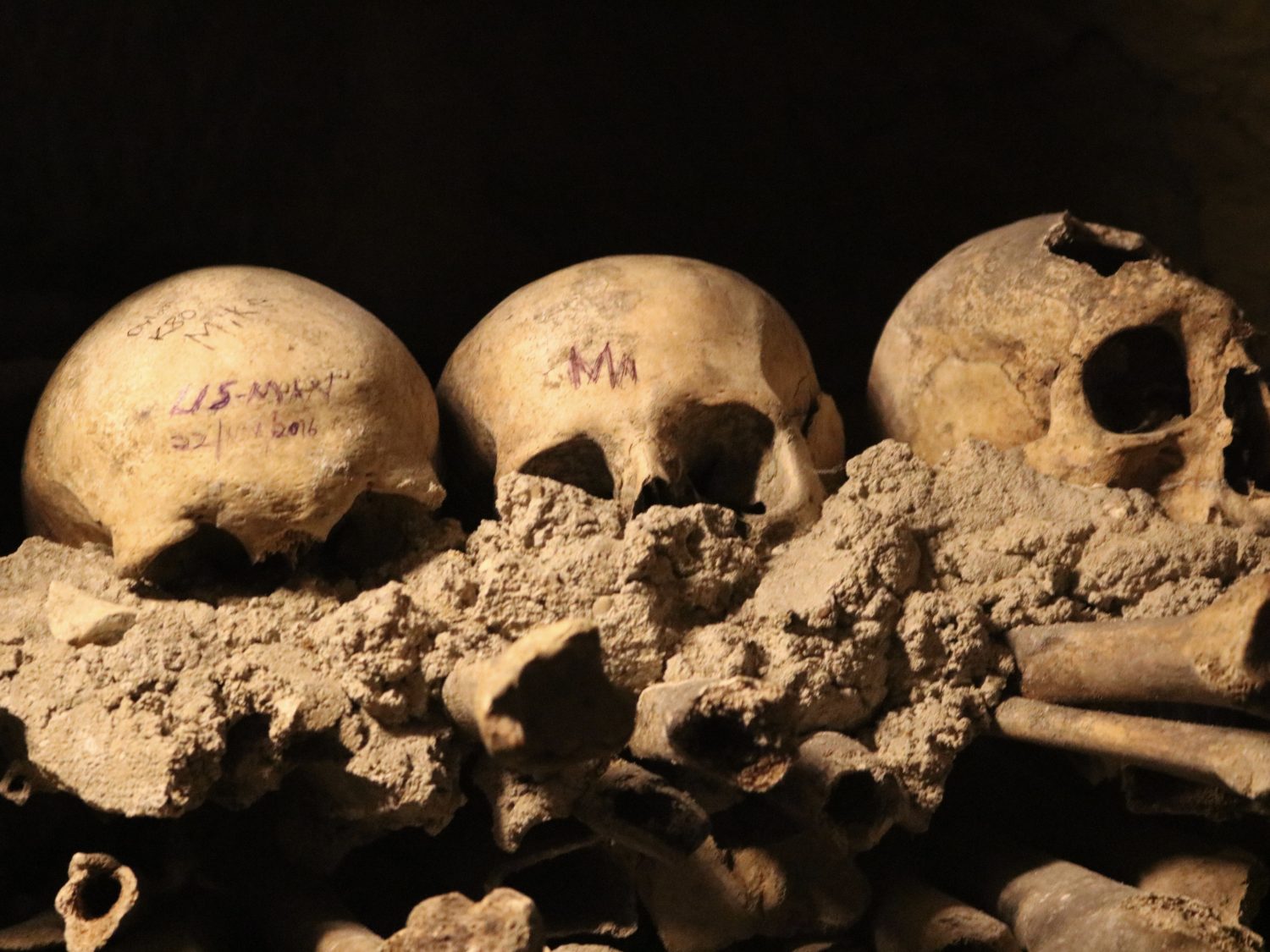 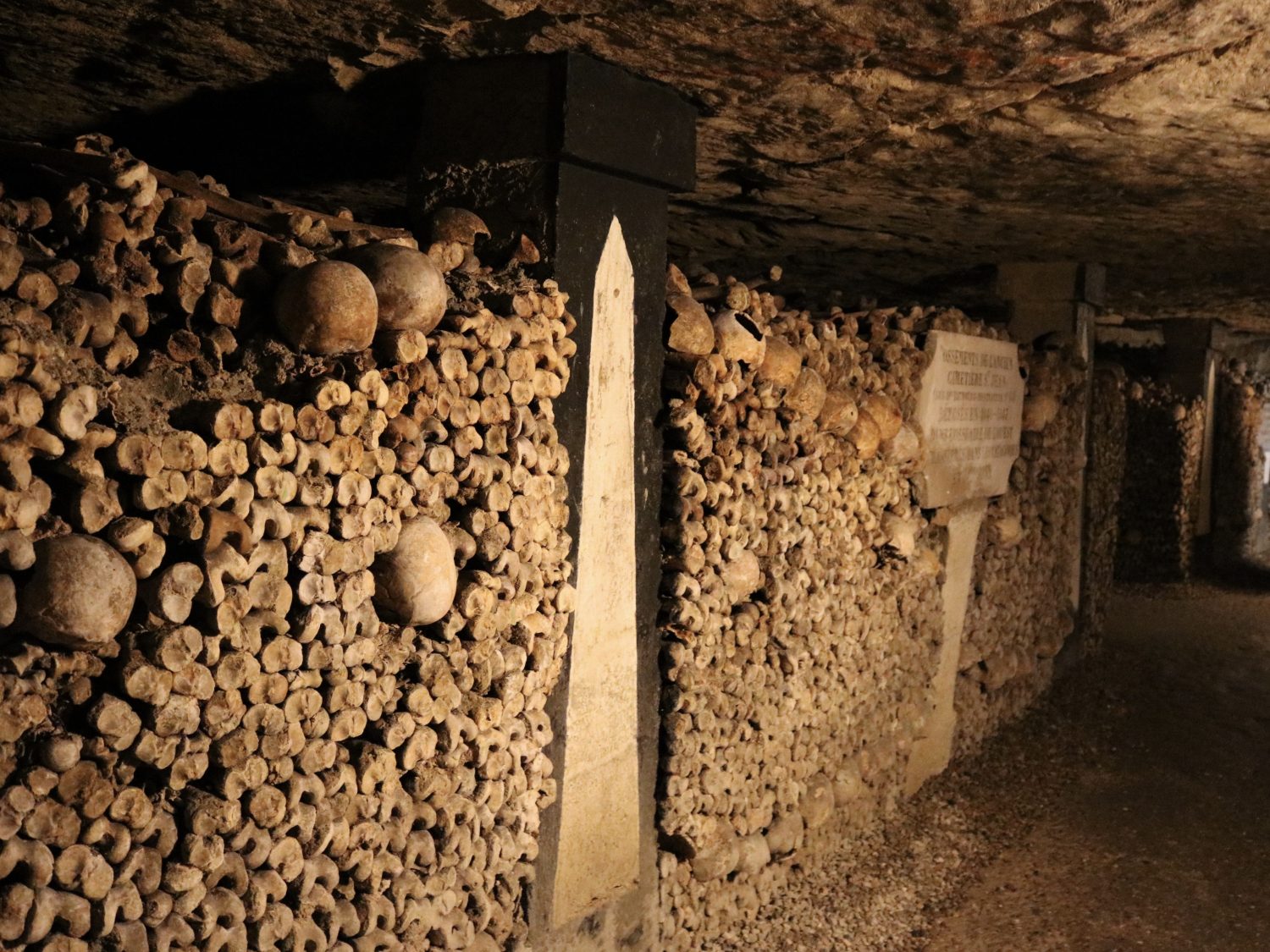 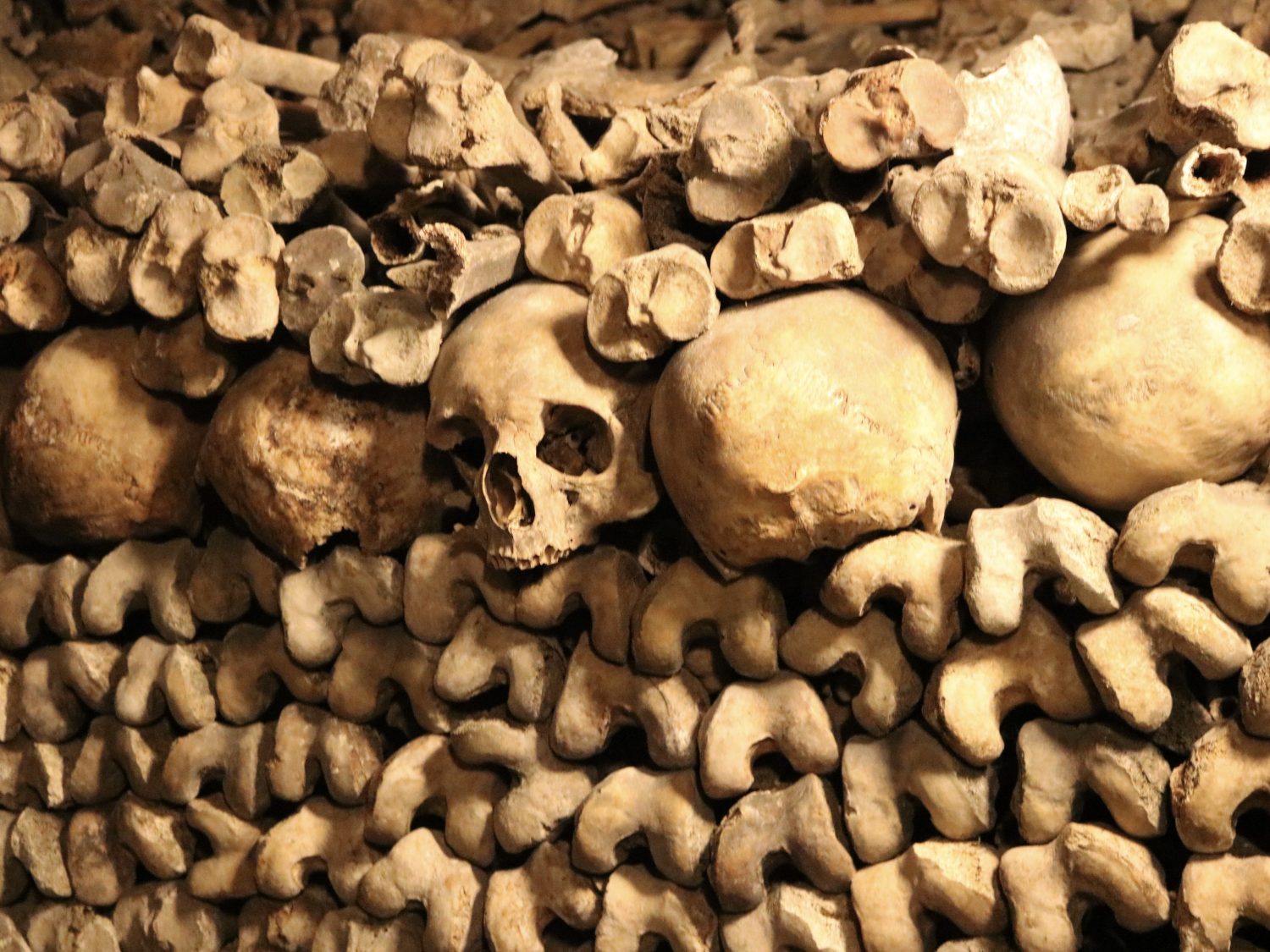 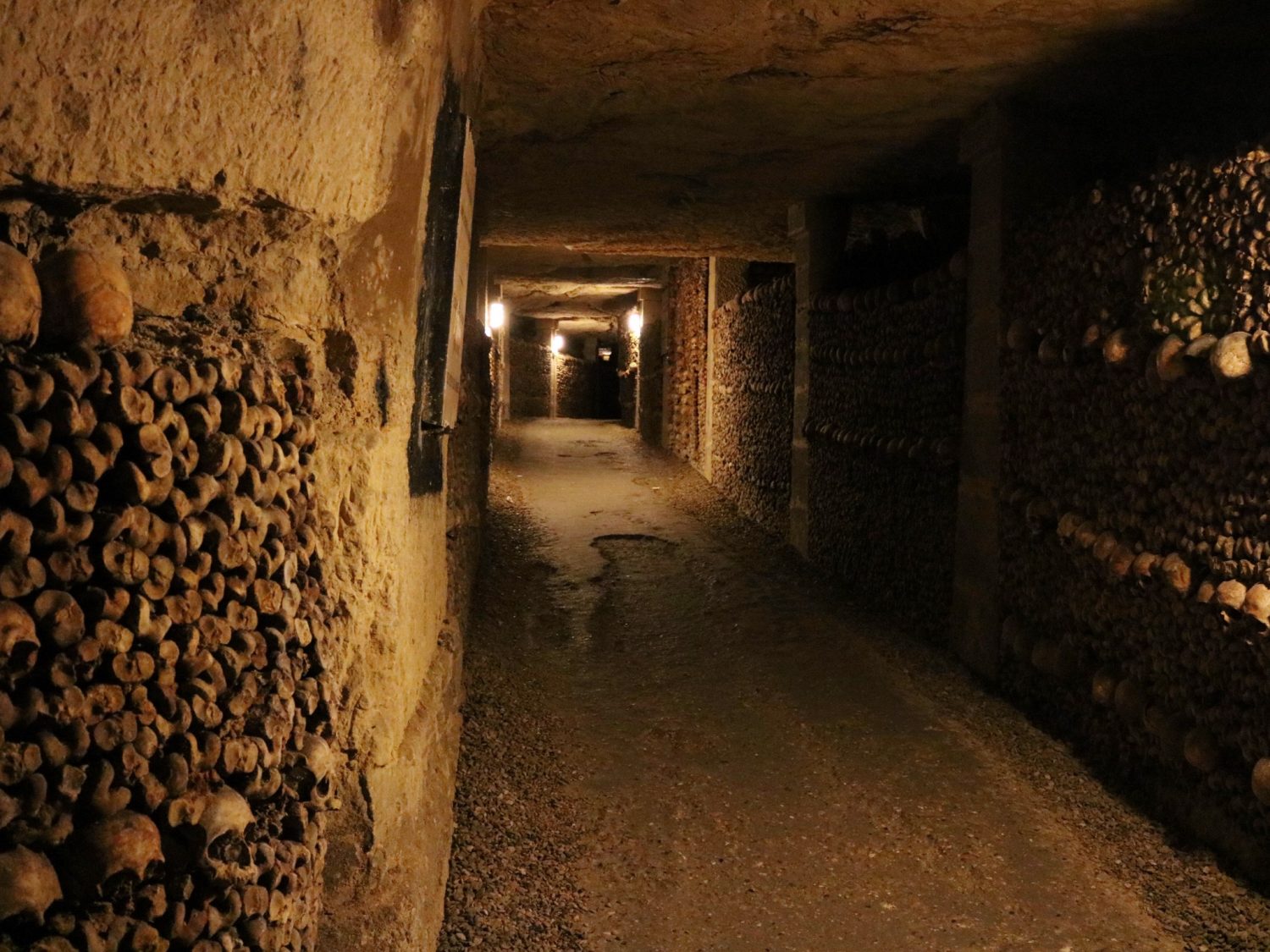 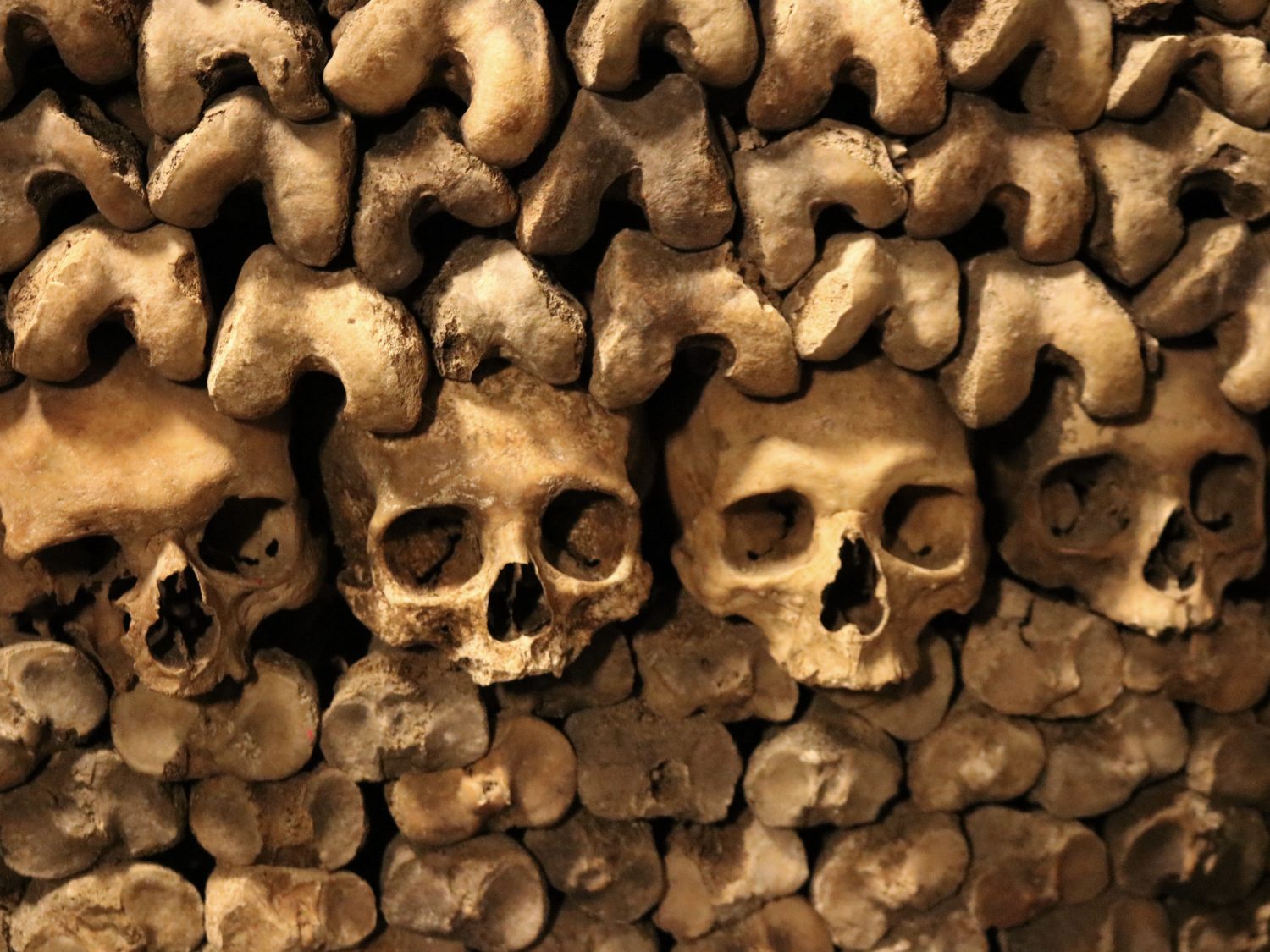 The Catacombs of Paris are underground ossuaries in Paris, which hold the remains of more than six million people in a small part of the ancient Mines of Paris tunnel network. I had seen so many pictures of the Catacombs before and had even learned about it briefly in school but seeing it in person was so surreal. Being surrounded by millions of skulls and bones of actual real life people was such an out of body experience. You’re allowed to touch certain things in the Catacombs so people were grabbing the skulls (they don’t really move if you touch them, they just wobble in place a little) to better examine them. 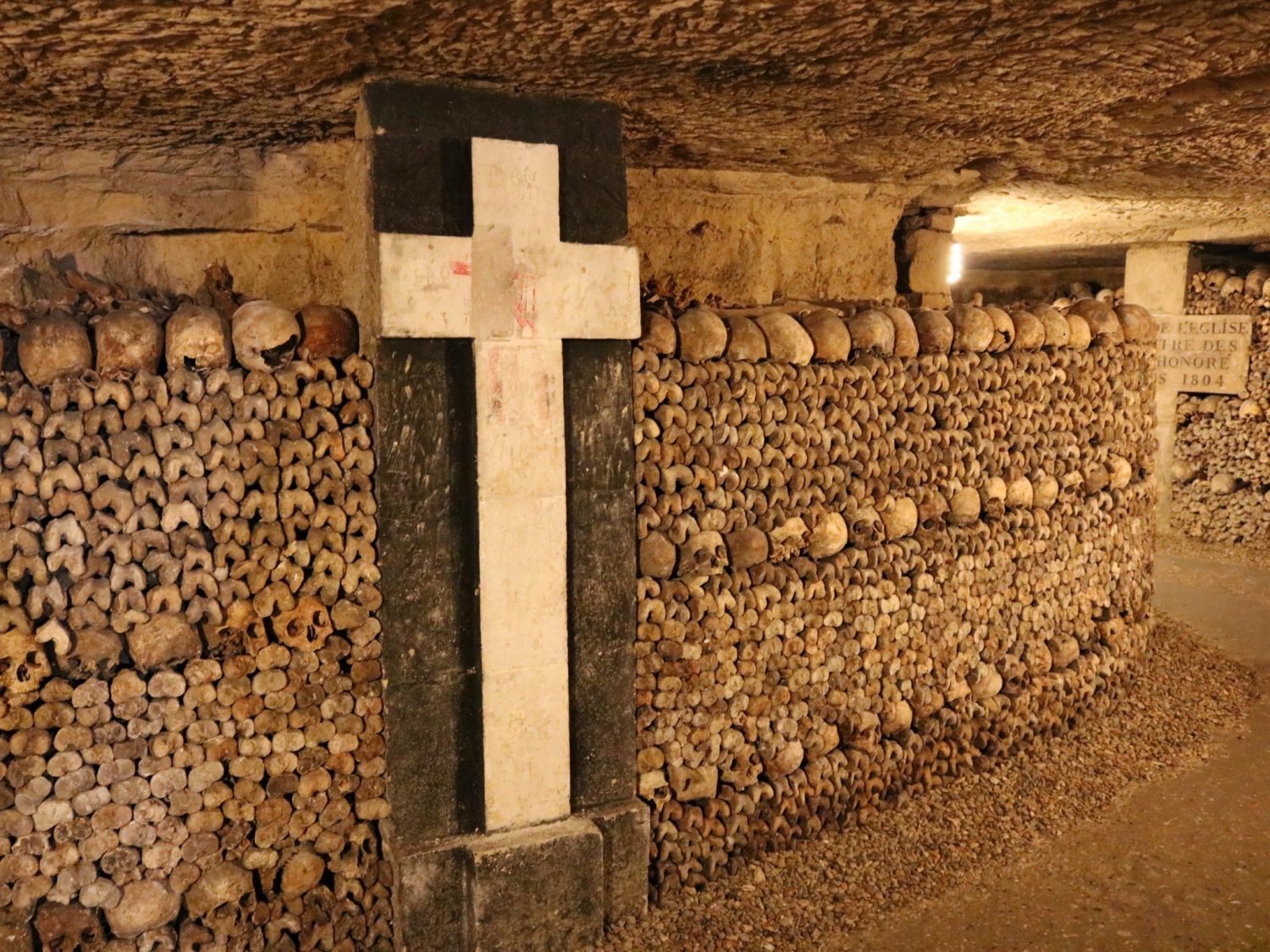 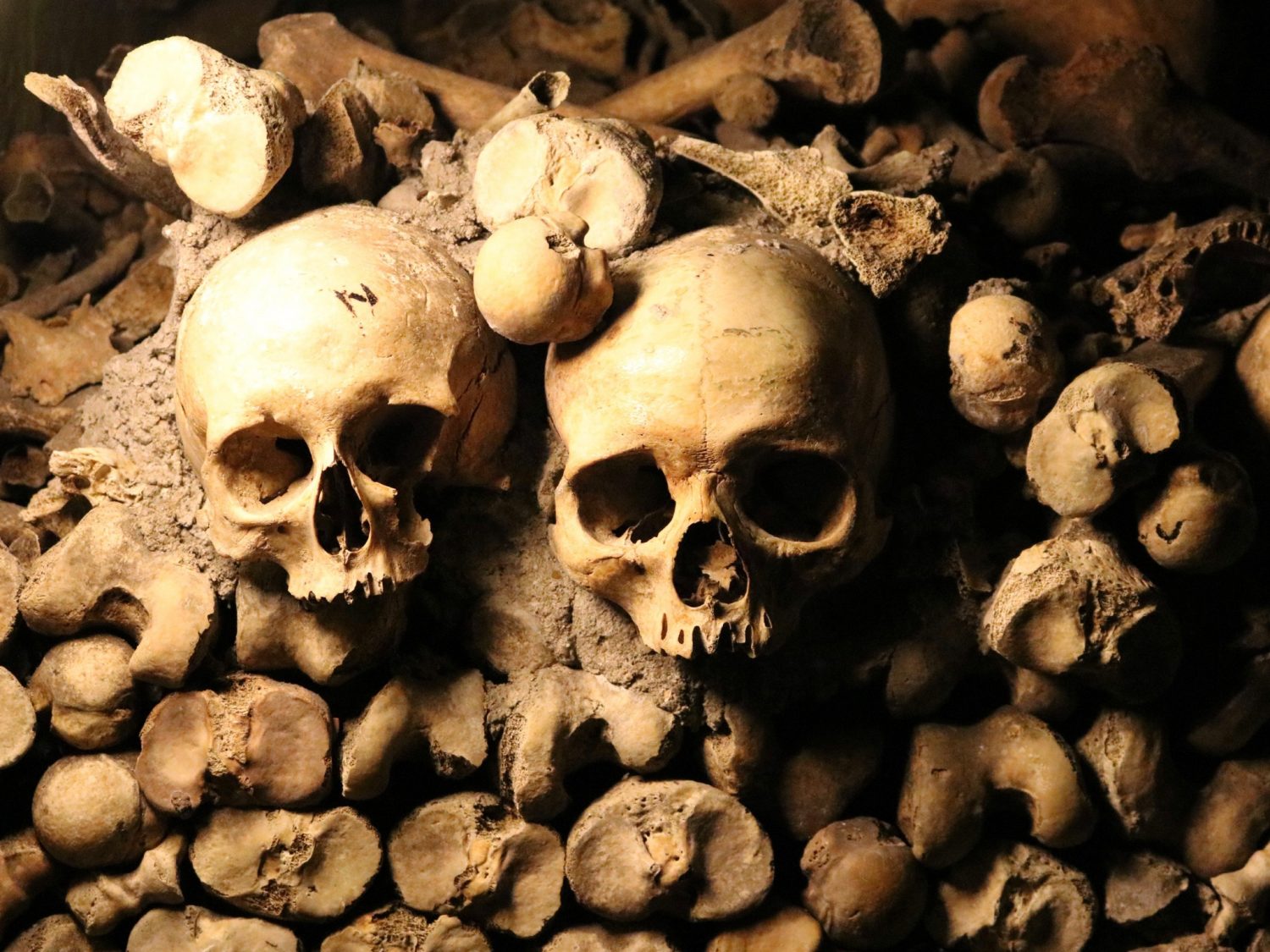 When I first saw this skull, Harry Potter immediately popped into my head (since that marking looks sort of like his scar) but I didn’t say anything out loud because I thought it would be weird/disrespectful since this was once an actual living human and I didn’t know the history behind it. But then this little boy, who had to have been six years old, turned to his mom, who was at the other end of the hallway, and basically shouted “He was a wizard mom!” 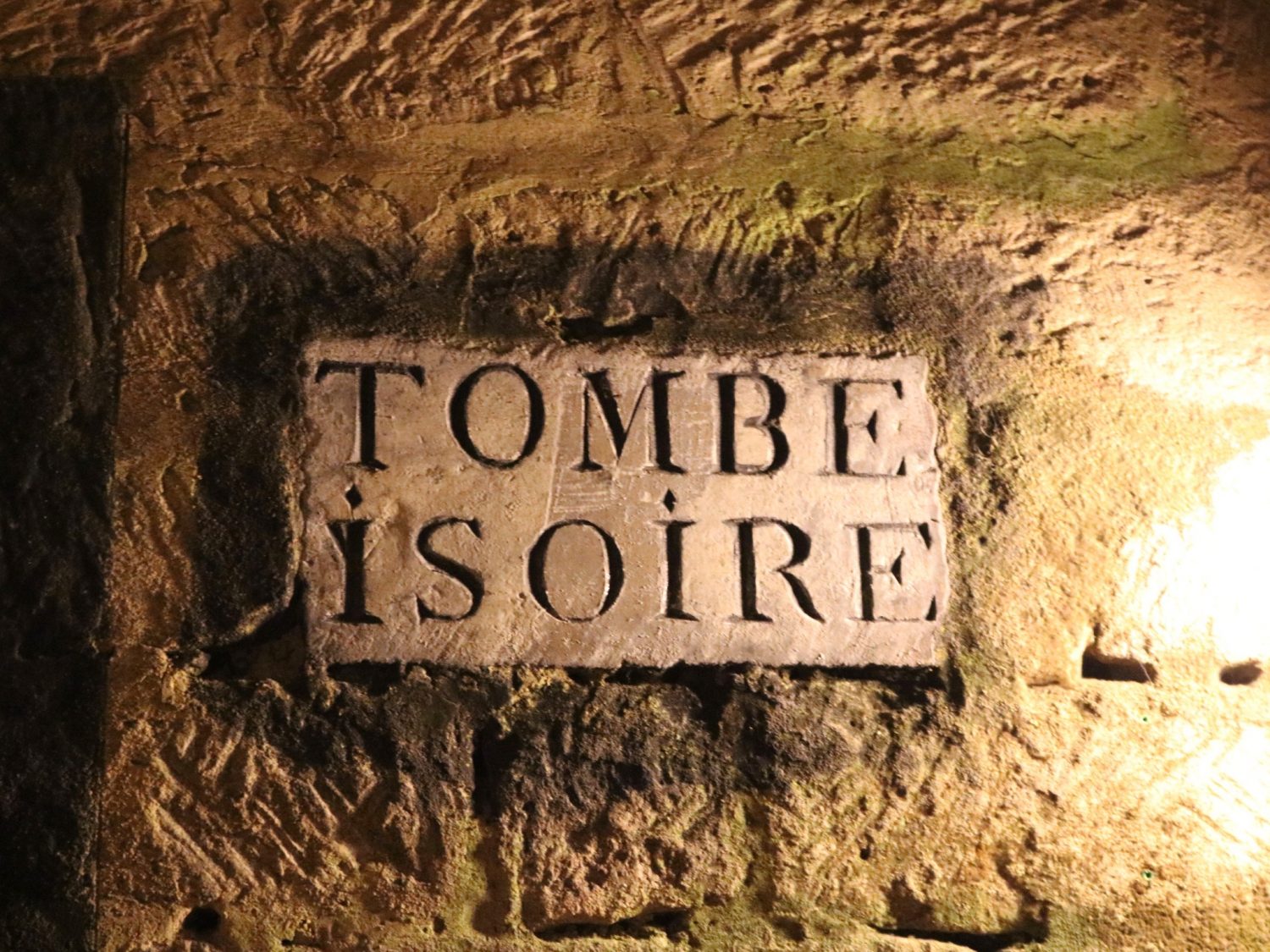 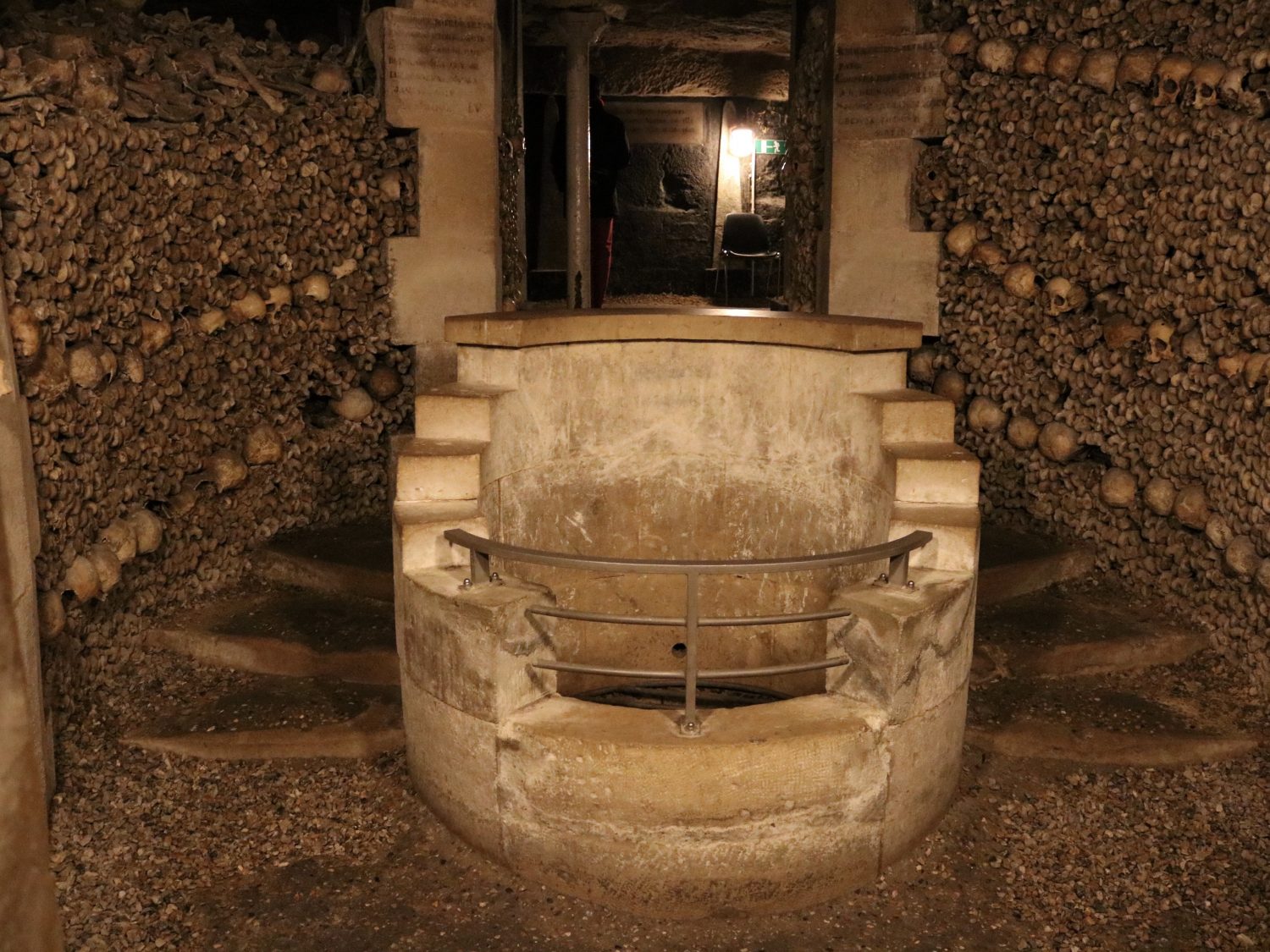 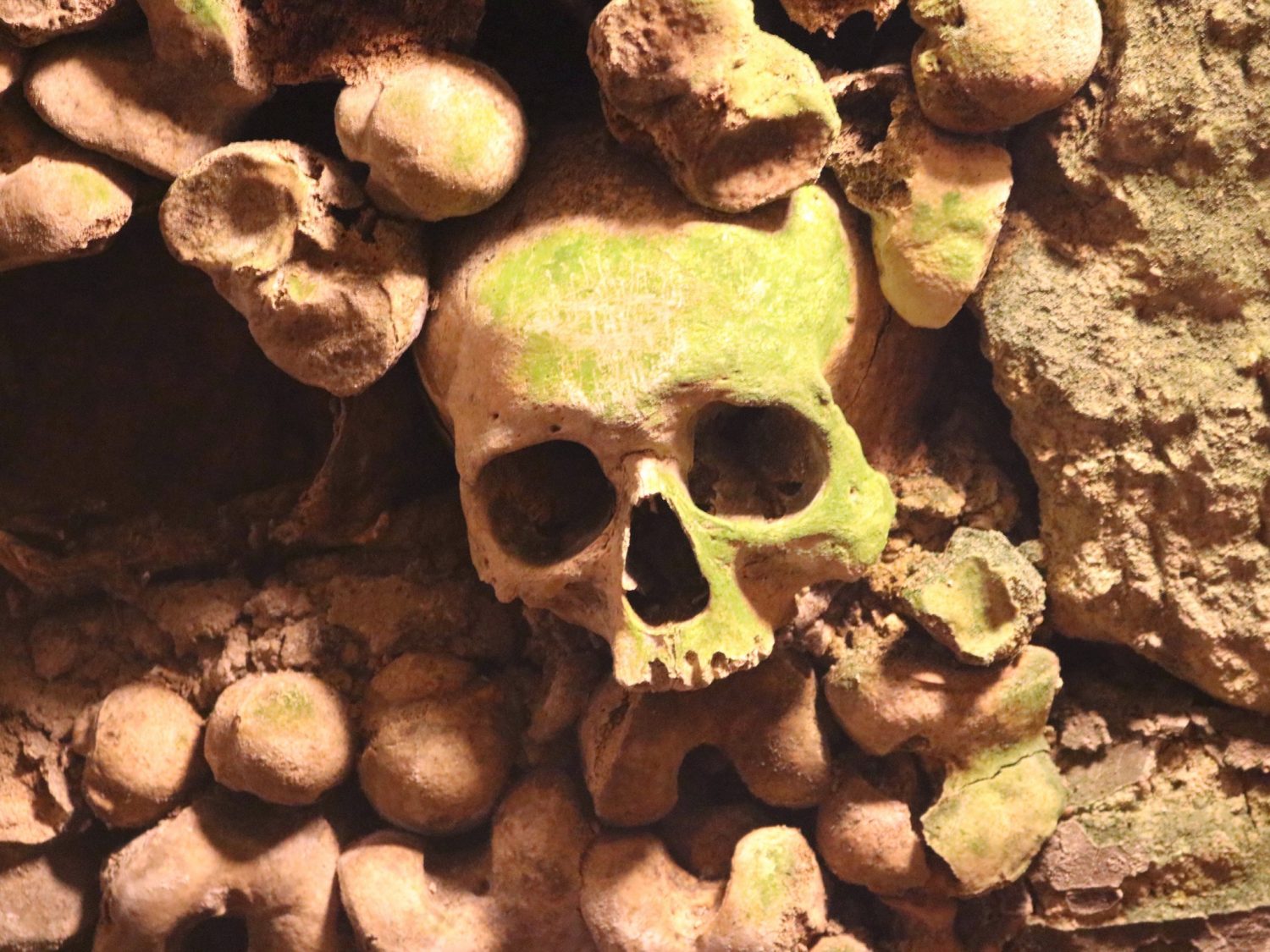 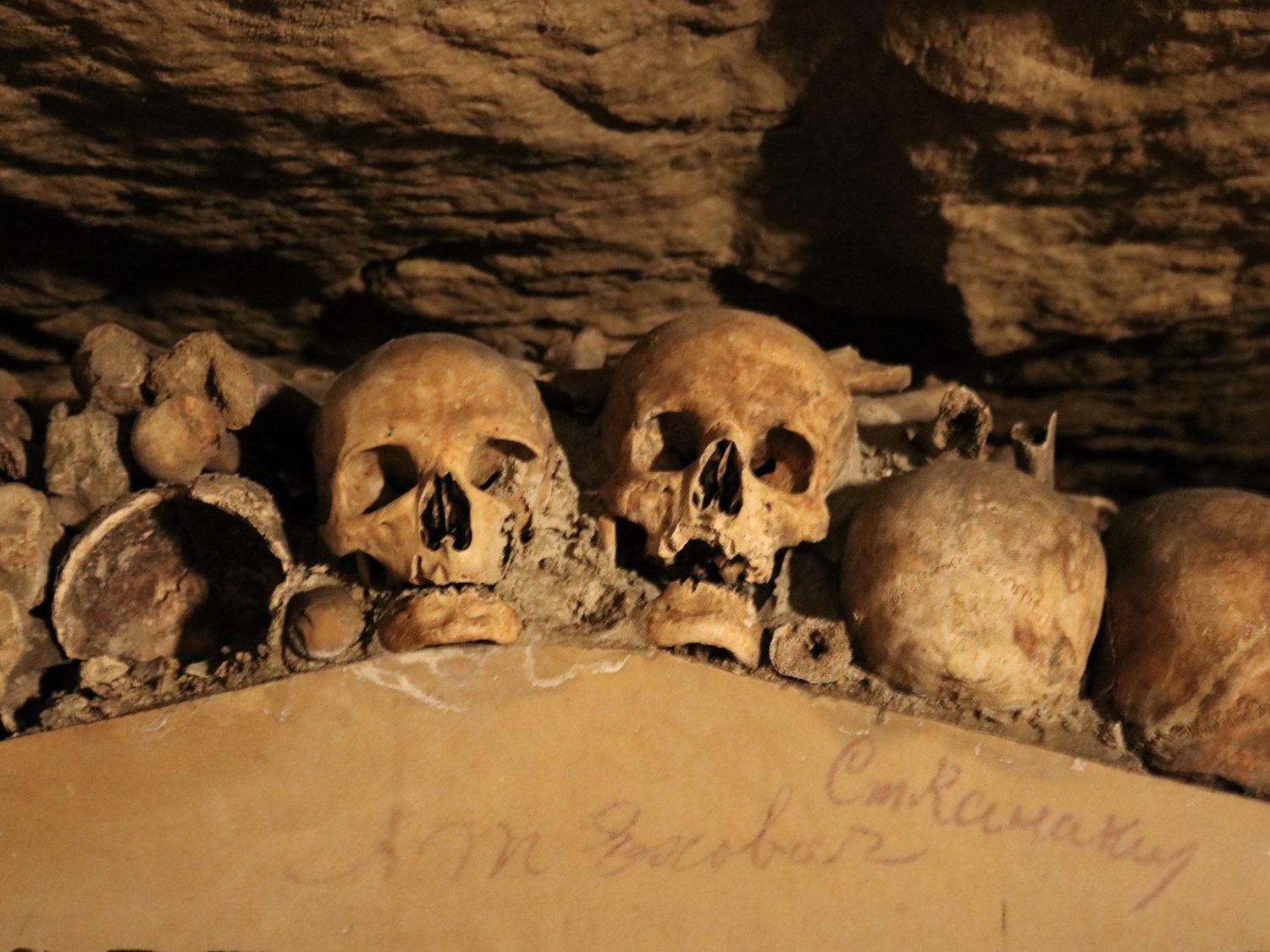 While walking throughout the Catacombs, I noticed that some of the bones were starting to rot since they were covered in green mold/a green substance. 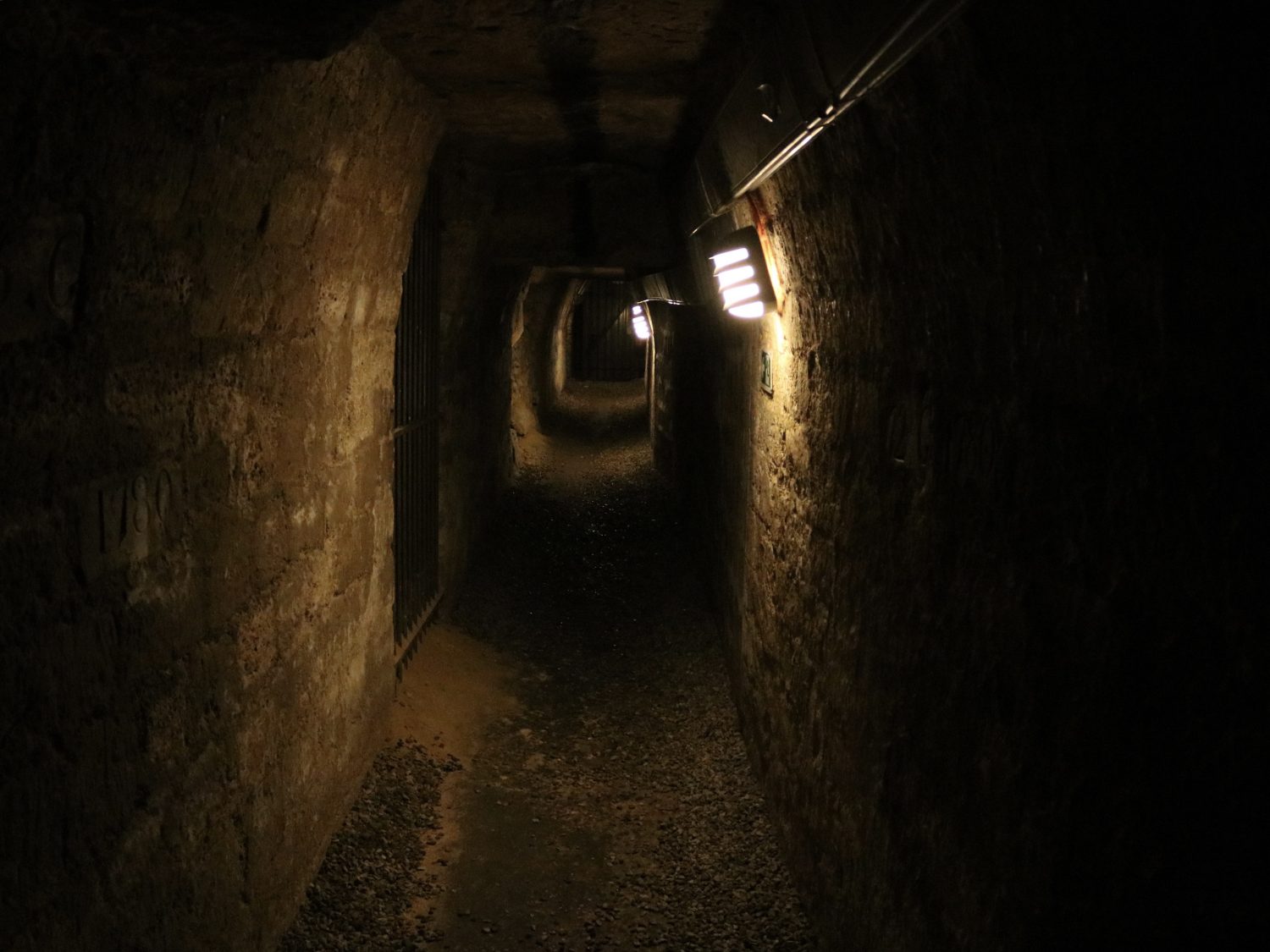 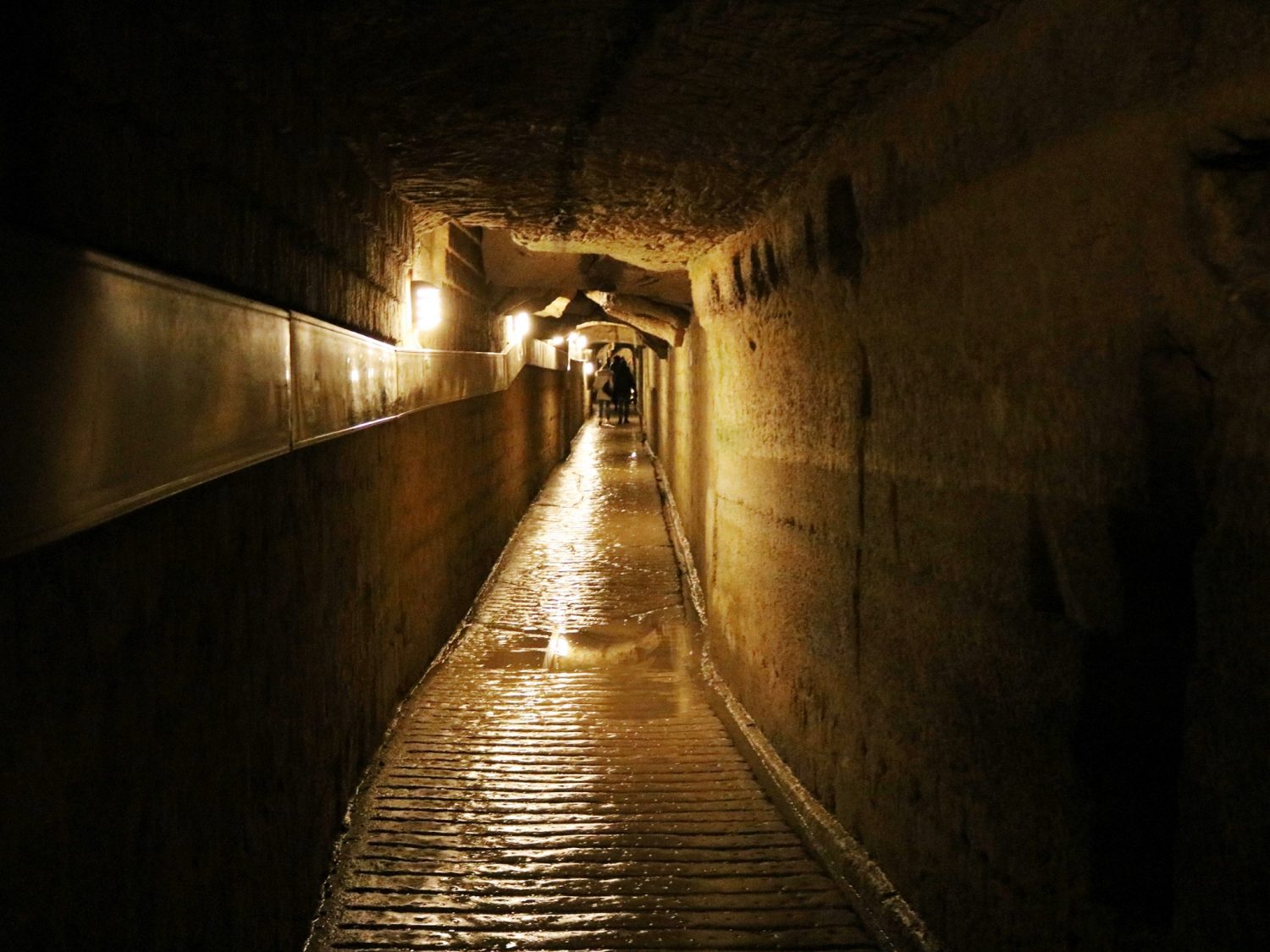 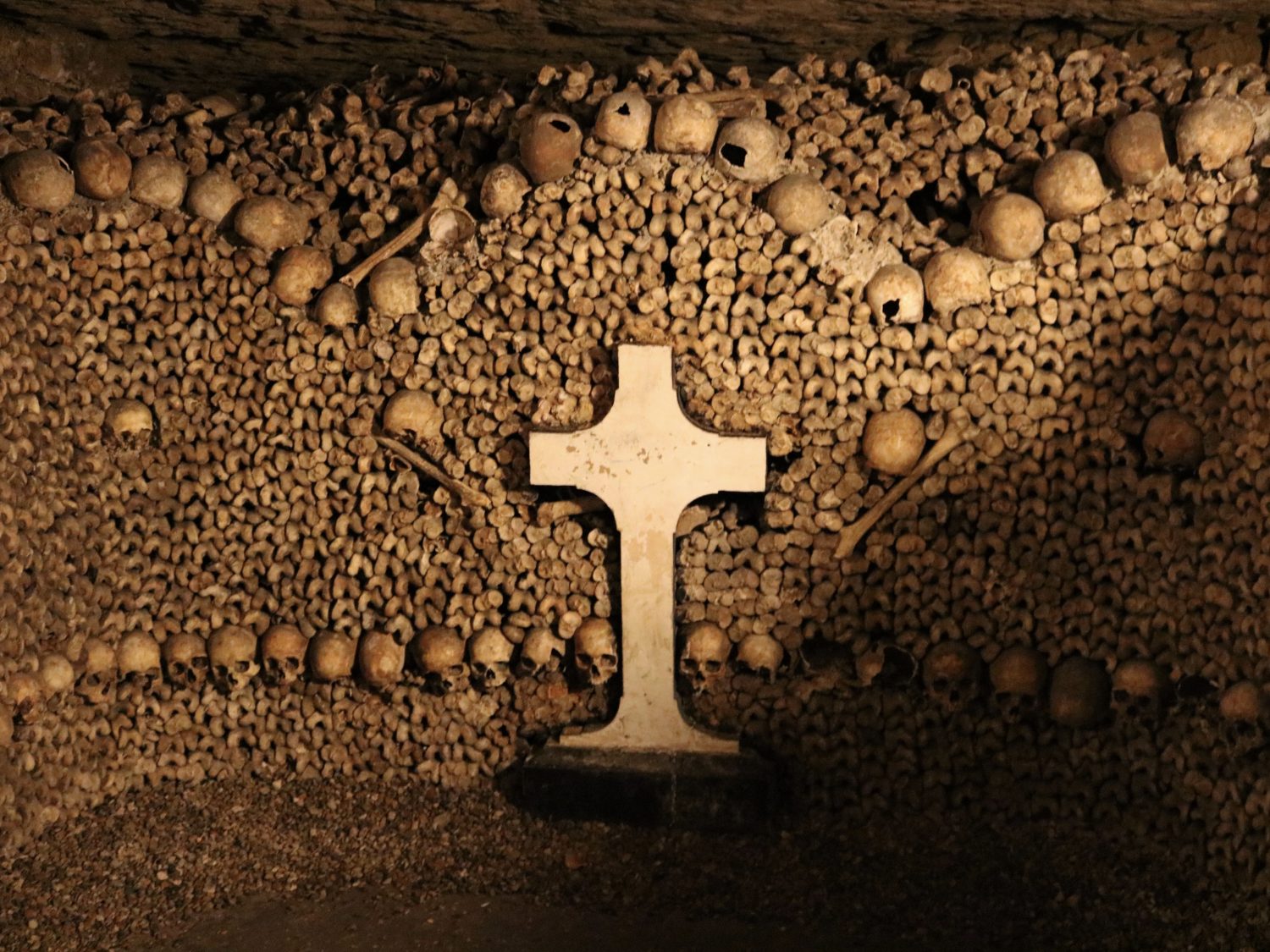 There are rumors that a demon of some kind lives in the Catacombs and several people have “caught footage of it” or some people say that the Catacombs is haunted but I honestly didn’t get that vibe from it at all. It was actually quite peaceful down in the Catacombs. 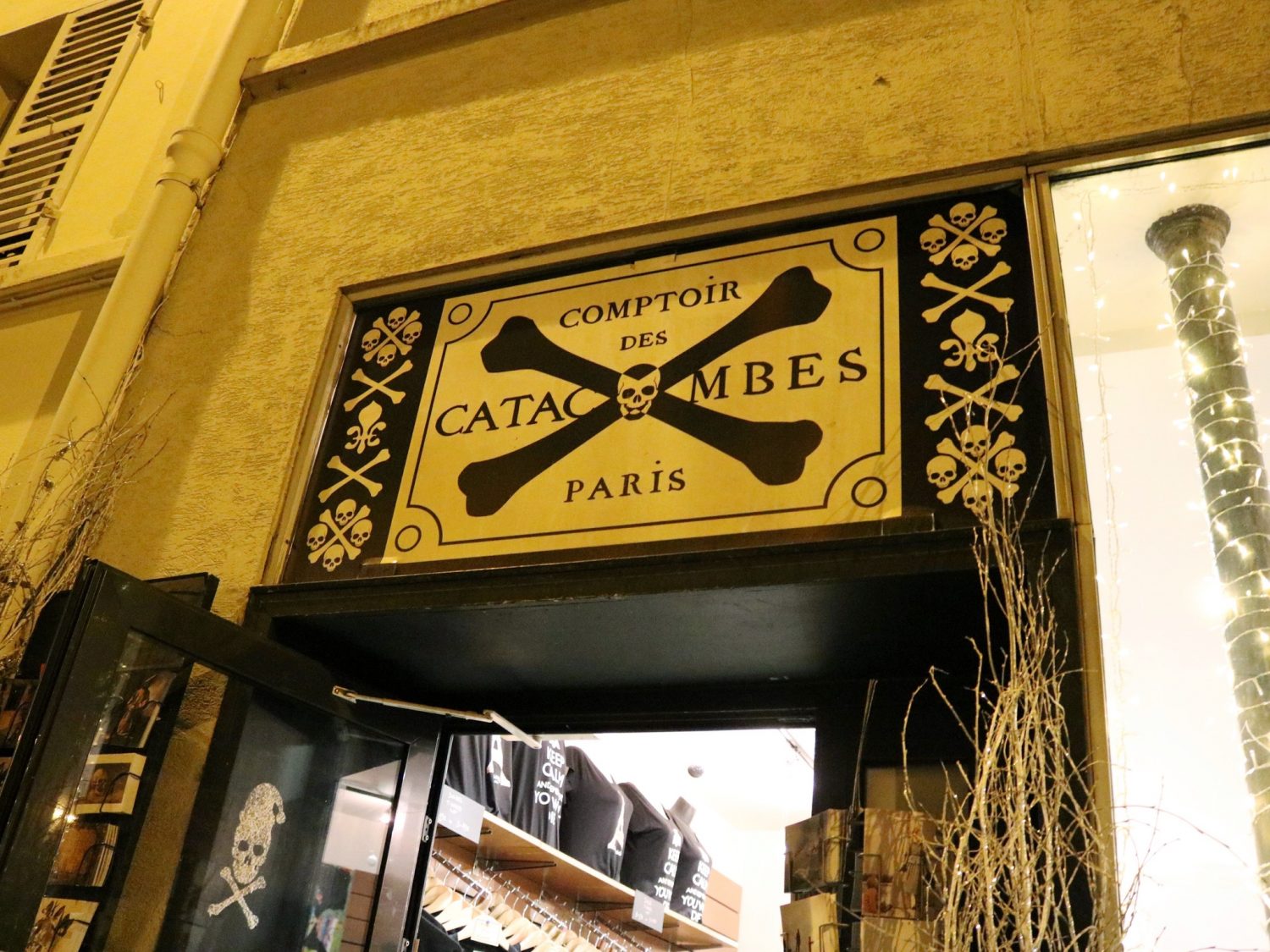 It takes about 45 minutes to an hour to walk/explore the entire Catacombs but depending on how fast or slow you’re walking or if you decide to stop and read the different information scattered throughout the Catacombs (which I did), it may take you longer to get through it all. I spend about an hour and a half in the Catacombs and I feel like I was about to digest everything in that amount of time. When you exit the Catacombs, be mindful that it is not the same location as where you entered. In fact, it’s several streets down the road and it’s in a back alley so it was a little confusing trying to find our way back to the train (thank goodness for the google maps app!).

I’d definitely recommend checking out the Catacombs of Paris if you’re in the area but if you don’t want to wait 2+ hours in line, definitely try to arrive first thing in the morning! I agree 100% with the people that say the Catacombs is “something you have to experience in person.”