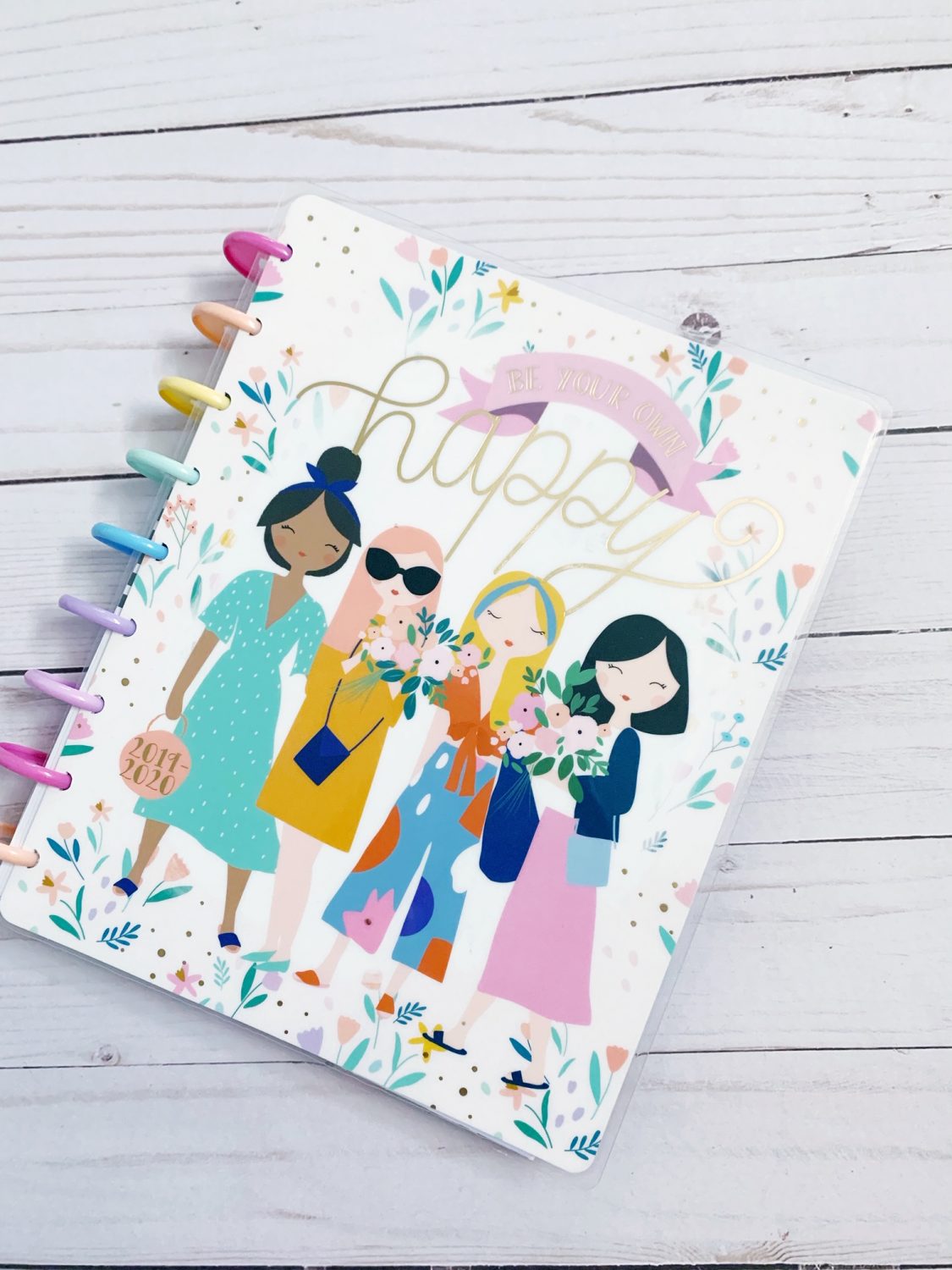 Happy Monday everyone! Happy Labor Day. And also, happy September. (Wow, that’s a lot of happy’s!). It’s a new month, which means it’s time for another installment of my Weekly Planner Spreads by Month series. (Aka the newest monthly series here on Simply Sinova). 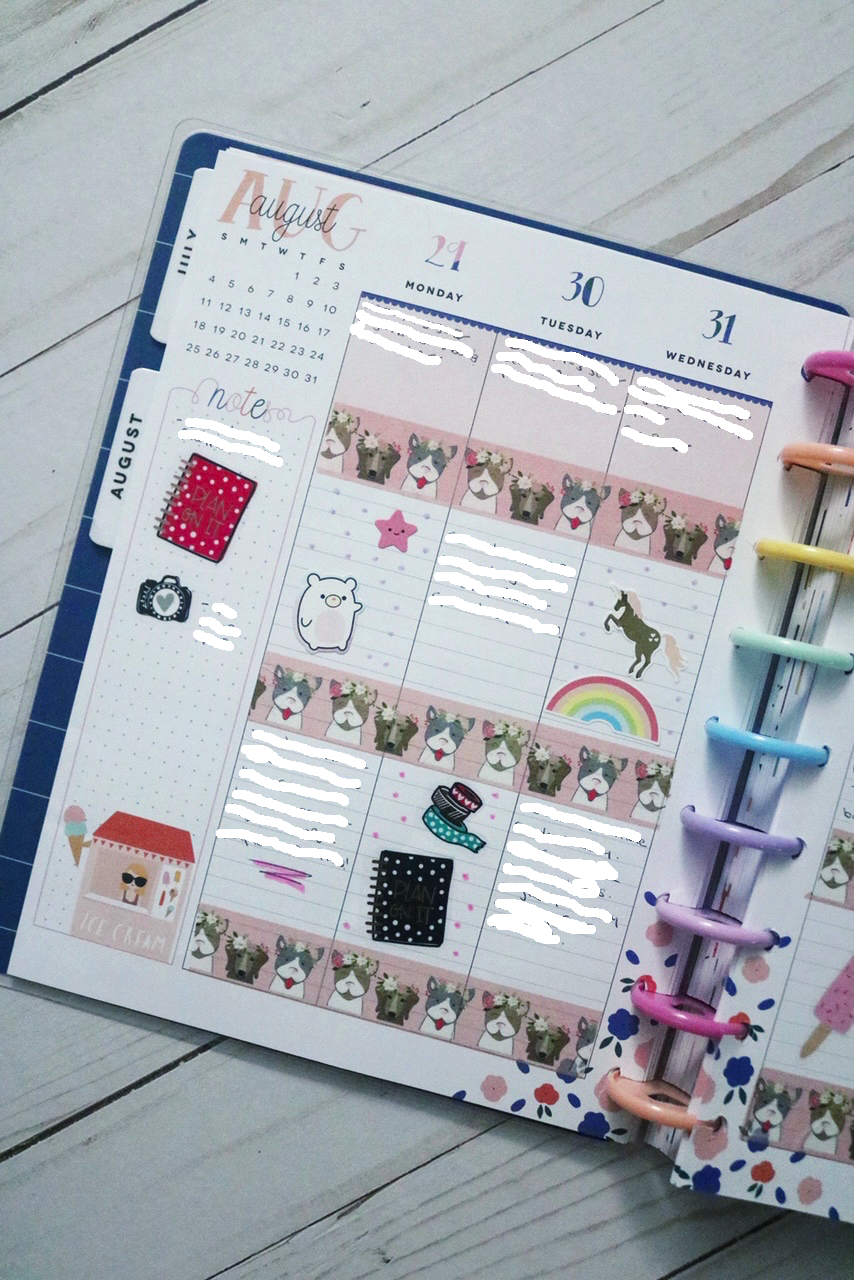 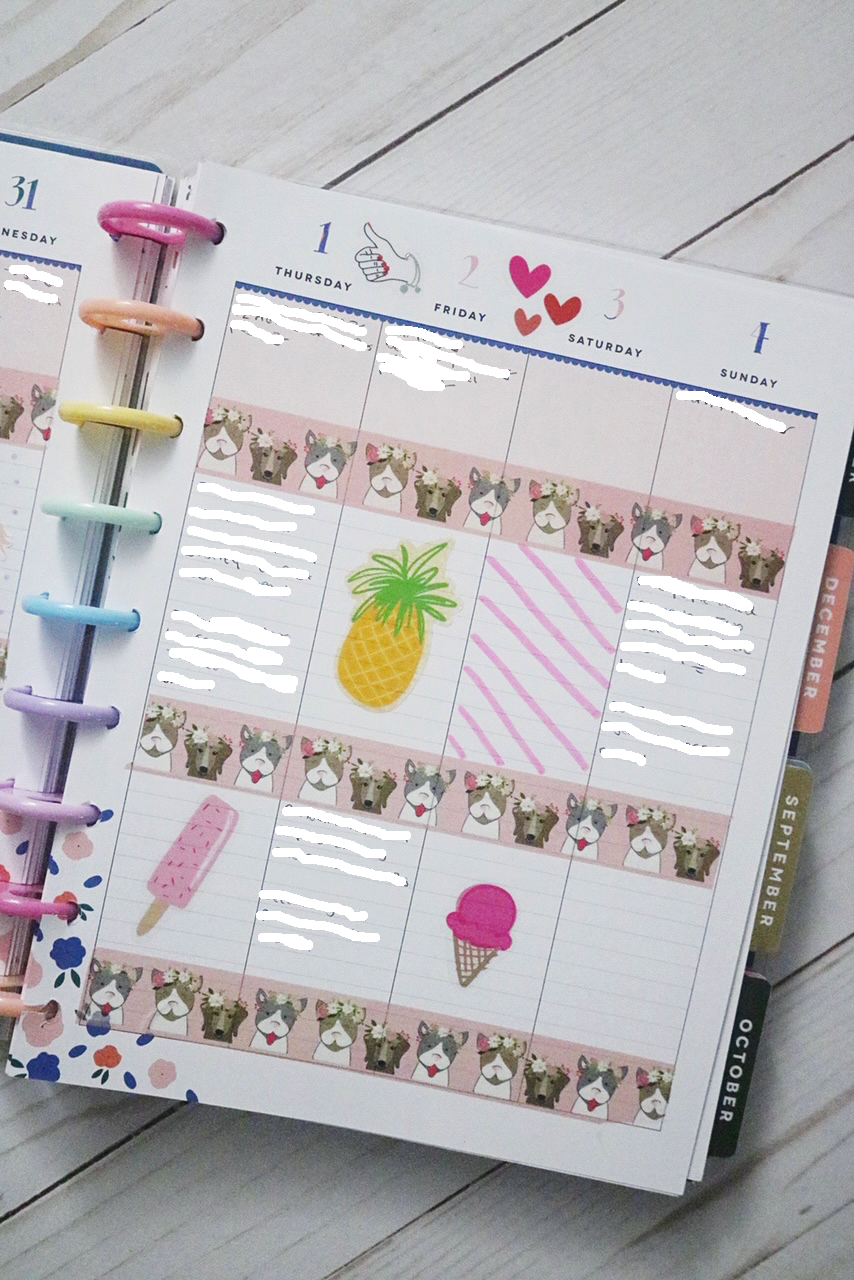 Since this week’s planner layout technically started in July (on the 29th), this months weekly spreads will include five weeks, instead of four. I attended Lollapalooza during this week so in honor of that, I went with washi tape that featured dogs in flower crowns. Get it, musical festivals and flower crowns? Hehehehe. 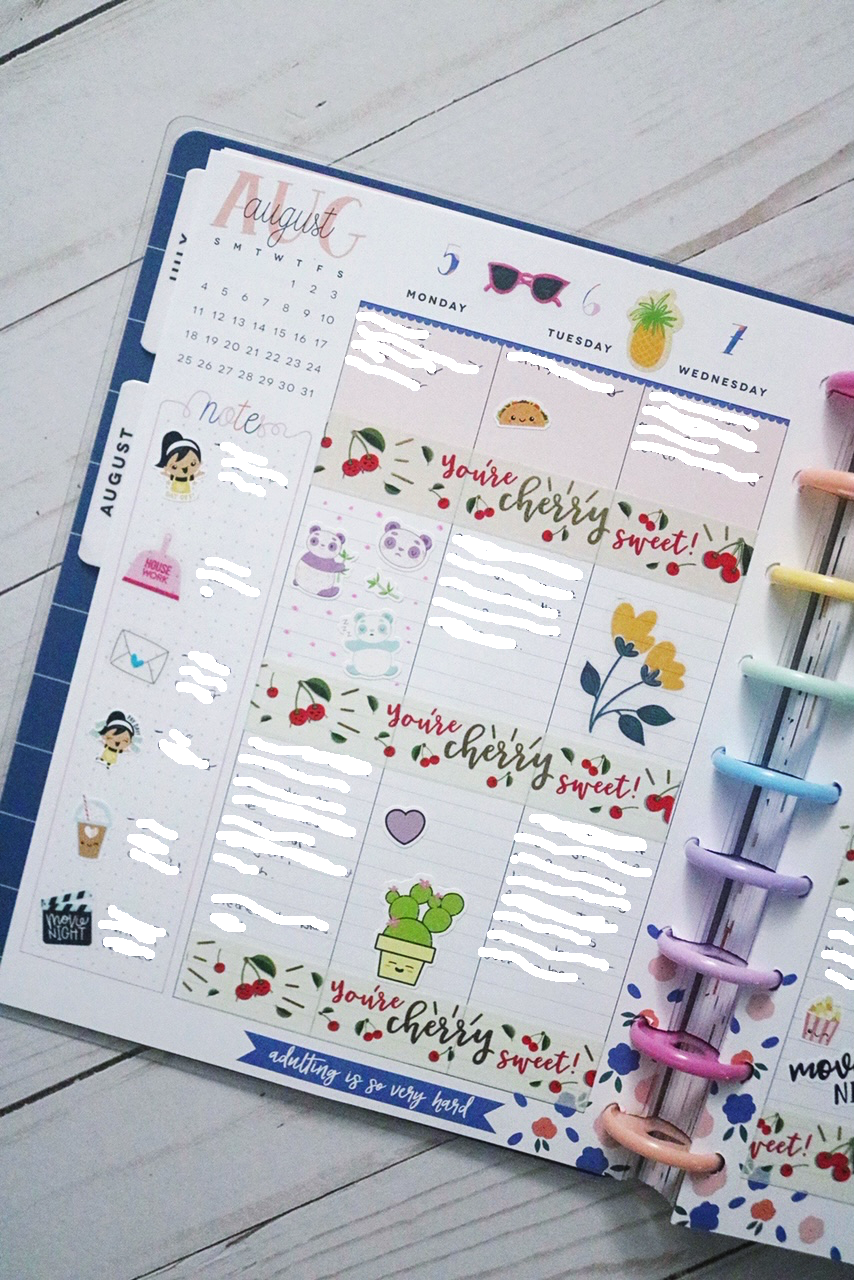 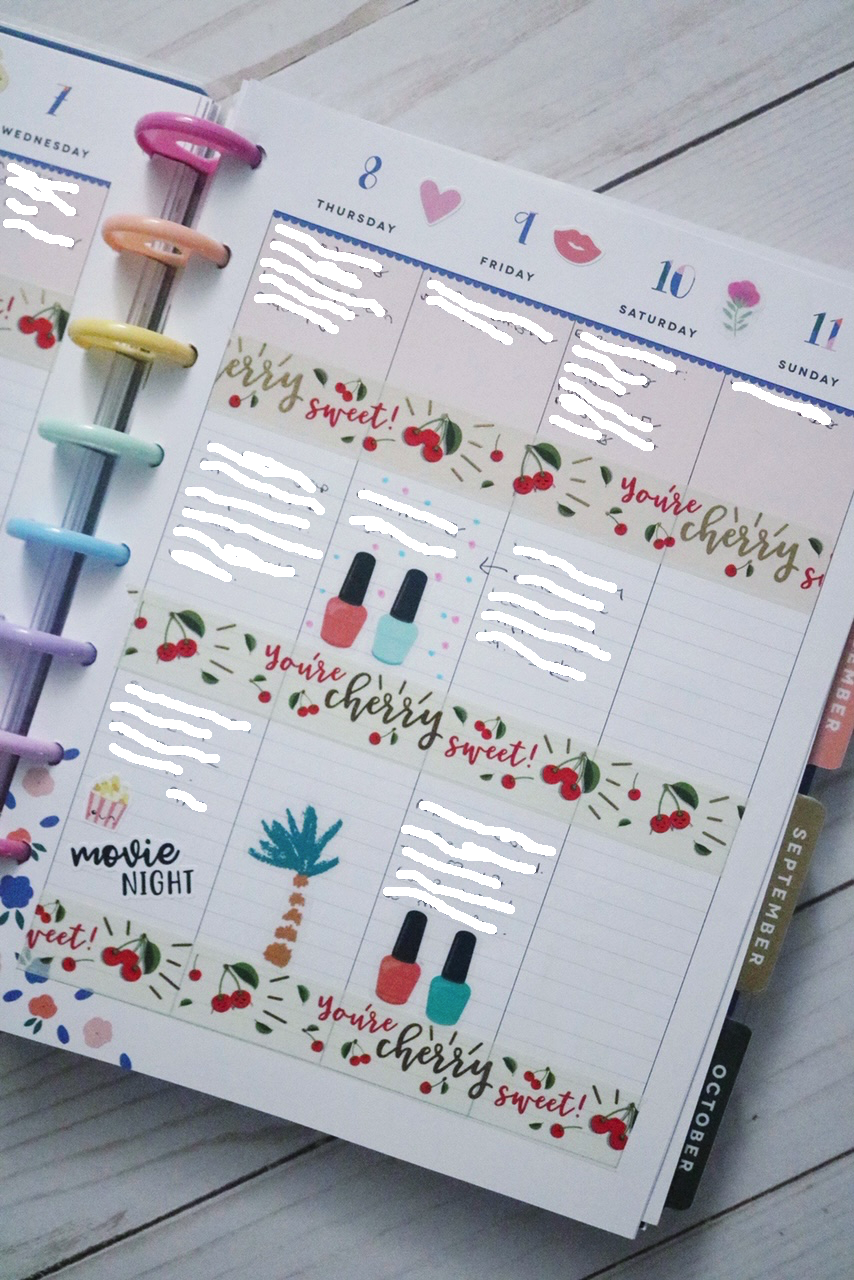 The week of August 5-11 was kind of a mess. You see those nail polish stickers under August 9th and 10th? Mini story time: Basically, on August 9th I went to a new nail salon for the first time. Since I was heading on my Disney Cruise the following week, I really wanted to get a nice mani pedi for my vacation. I had heard so many great things about this nail salon. Well, after getting an adorable rose gold no chip manicure, the next day (August 10th) three, THREE of my nails clipped. THE. NEXT. DAY.

The new salon redid my nails but then two more chipped two days later. Never again. Funny thing is, the third time I went back four other people were there getting their nails redone to. I have never had a nail salon experience like that before. Looks like I’ll be going back to my old nail salon from now on.

One highlight of the week was seeing Once Upon a Time in Hollywood. (How cute is that little kawaii popcorn bucket sticker under August 8). 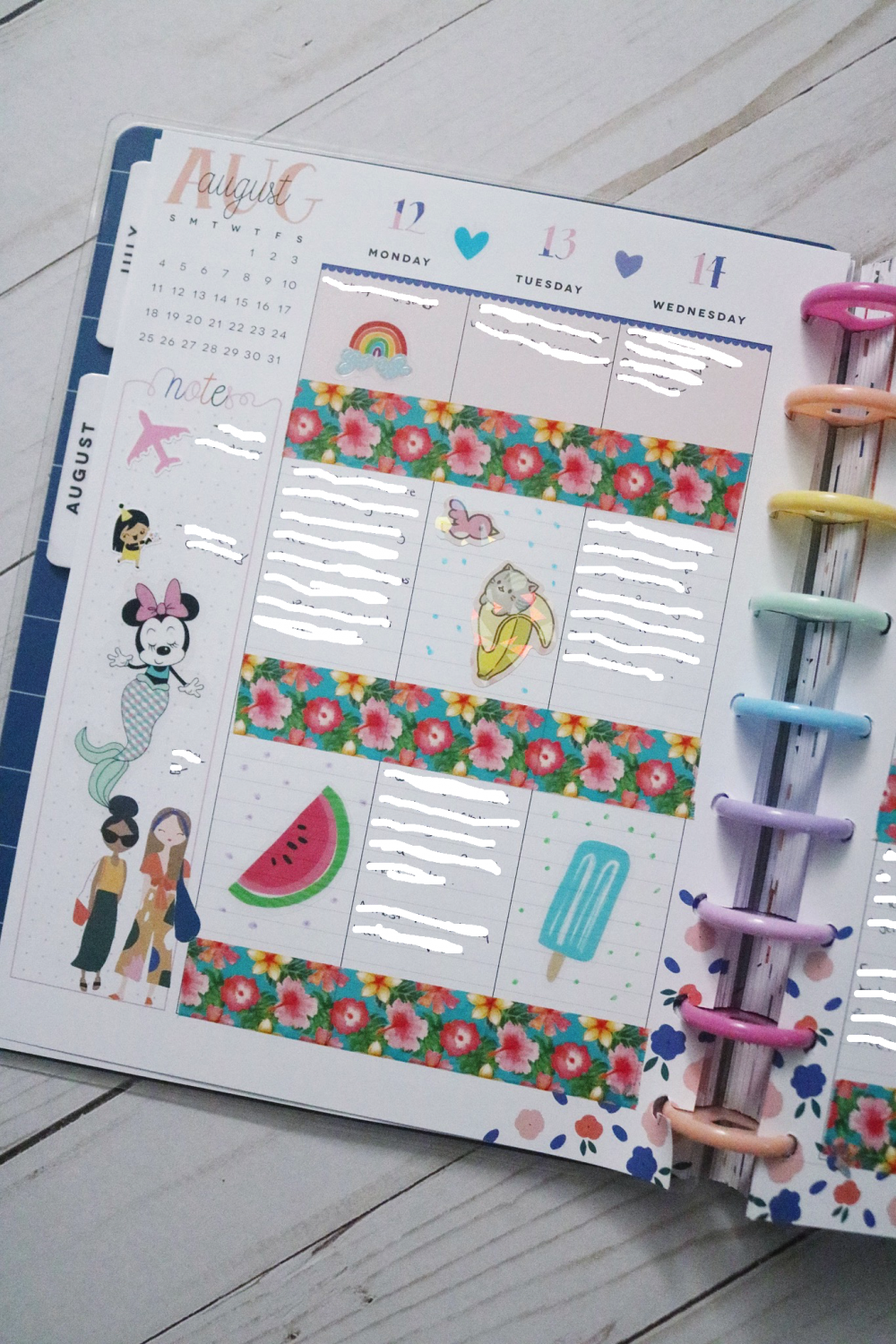 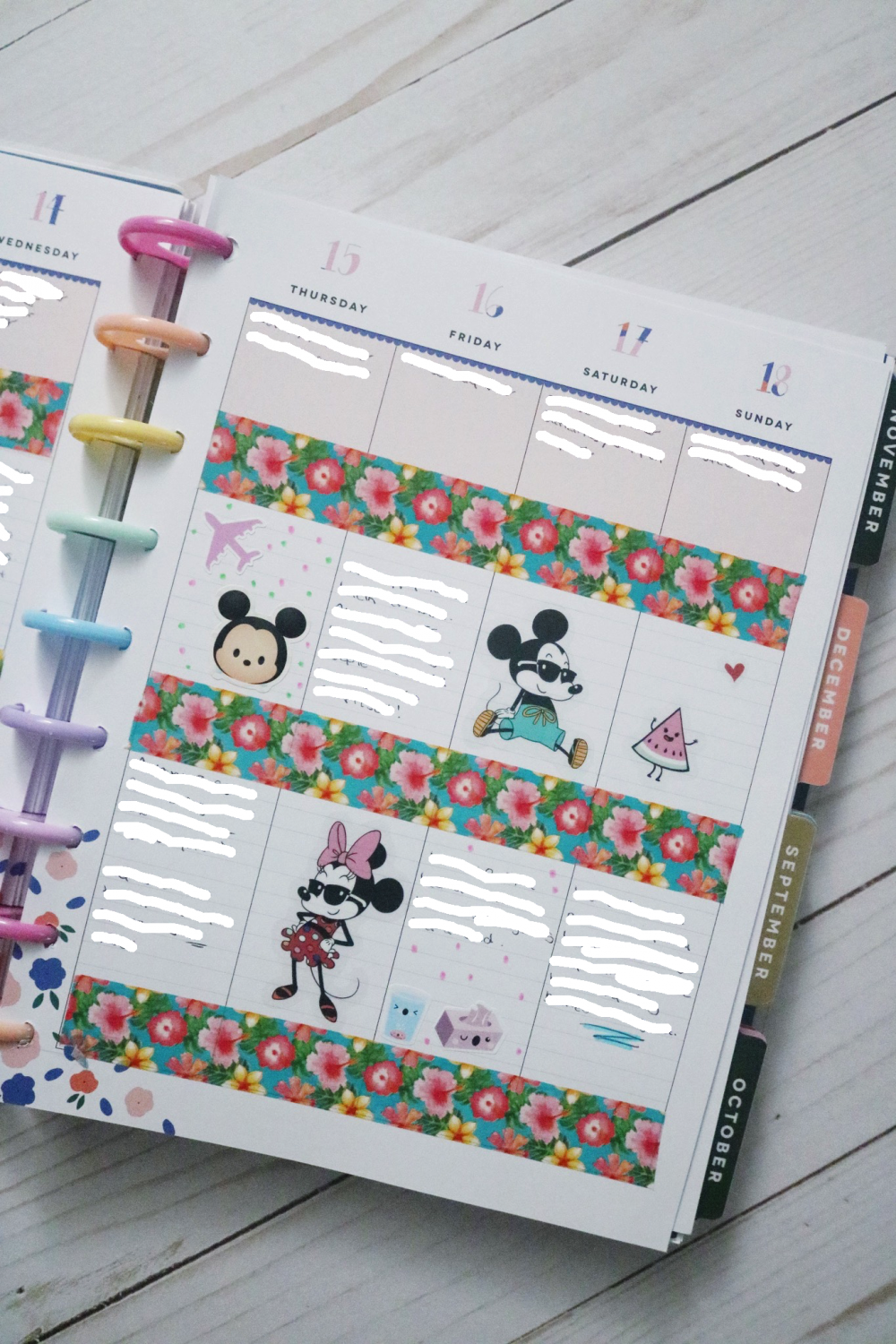 This was probably my favorite week in August because it was the start of my Disney Cruise! Hence all the Disney stickers through the spread. How adorable do Mickey and Minnie look in their little swimsuits and sunglasses? 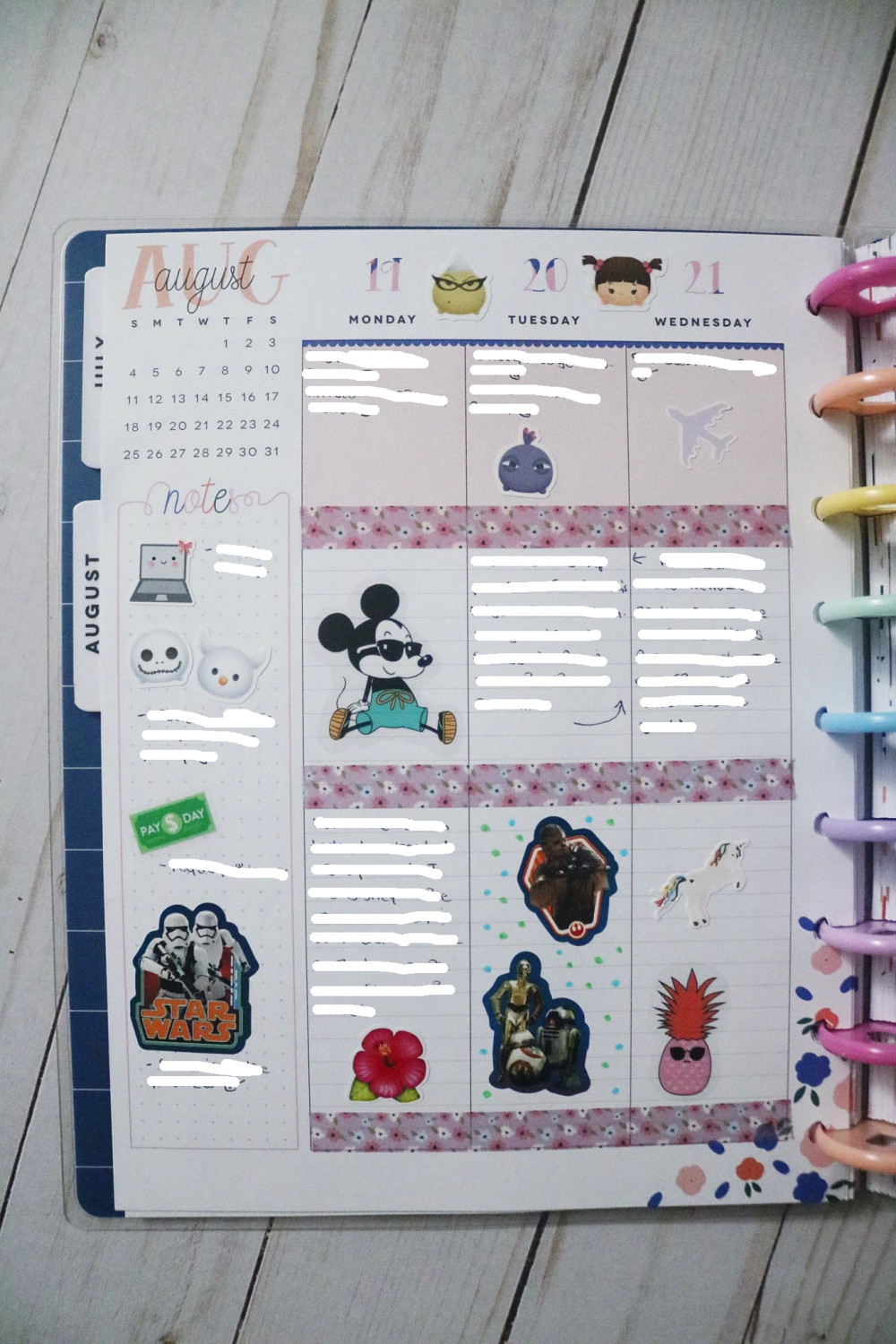 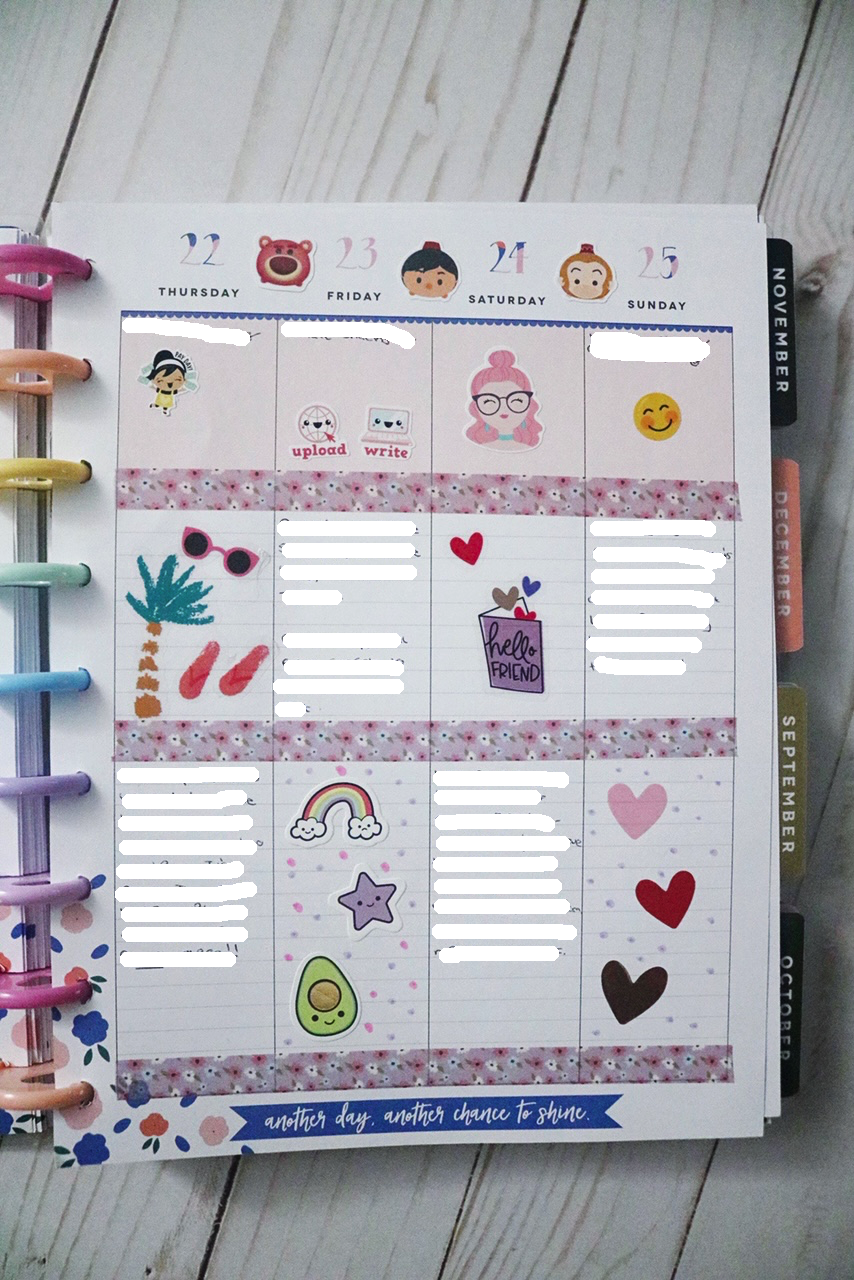 The week of August 19-25 was also a great week because this week was the end of my Disney Cruise and the start of my mini post cruise Disney World trip. As you can see by the Jack and Zero stickers on the side of the spread, I got to attend Mickey’s Not So Scary Halloween Party! I also got to attend a special Annual Passholder preview of Star Wars: Galaxy’s Edge. (Hence the Star Wars stickers!). You can read my Complete Guide to Star Wars: Galaxy’s Edge HERE.

It was also my payday week, so that’s always something to celebrate! 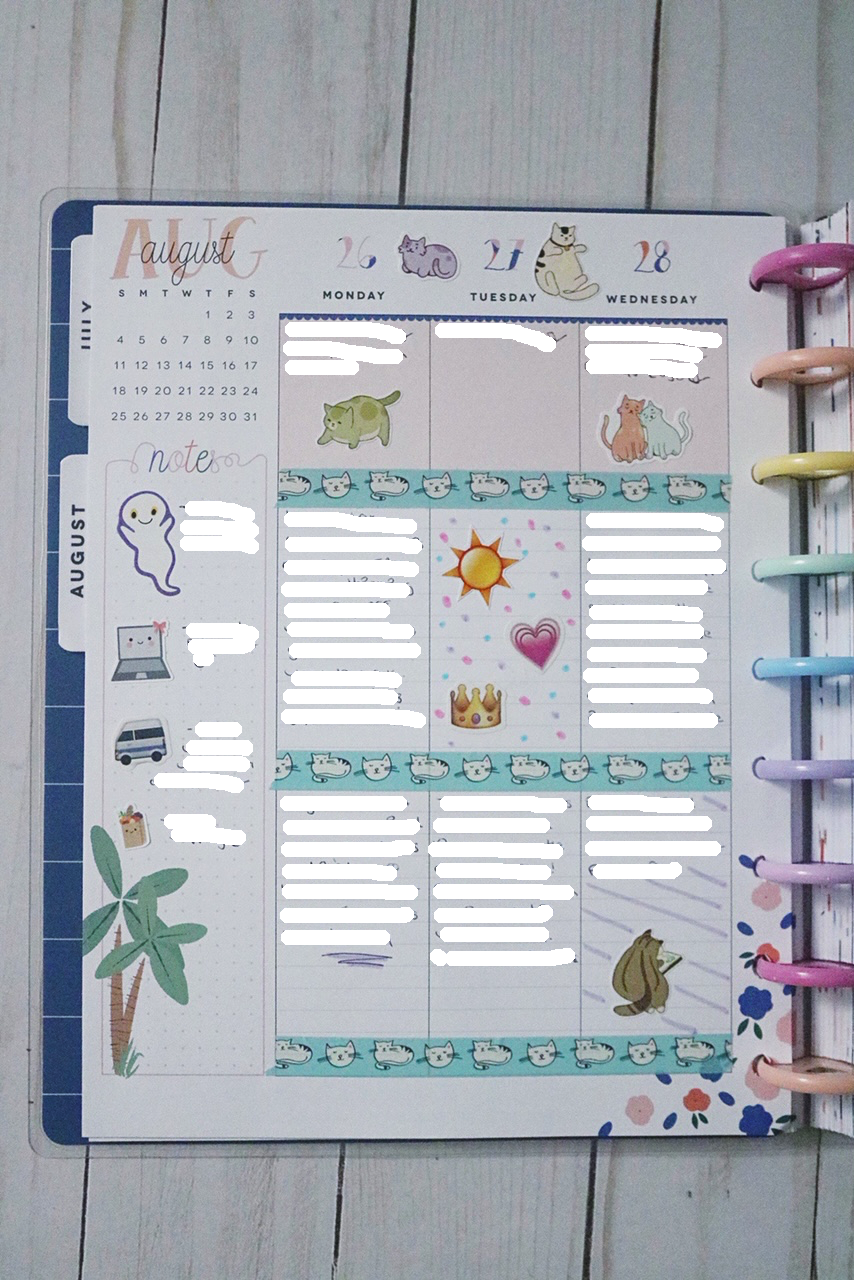 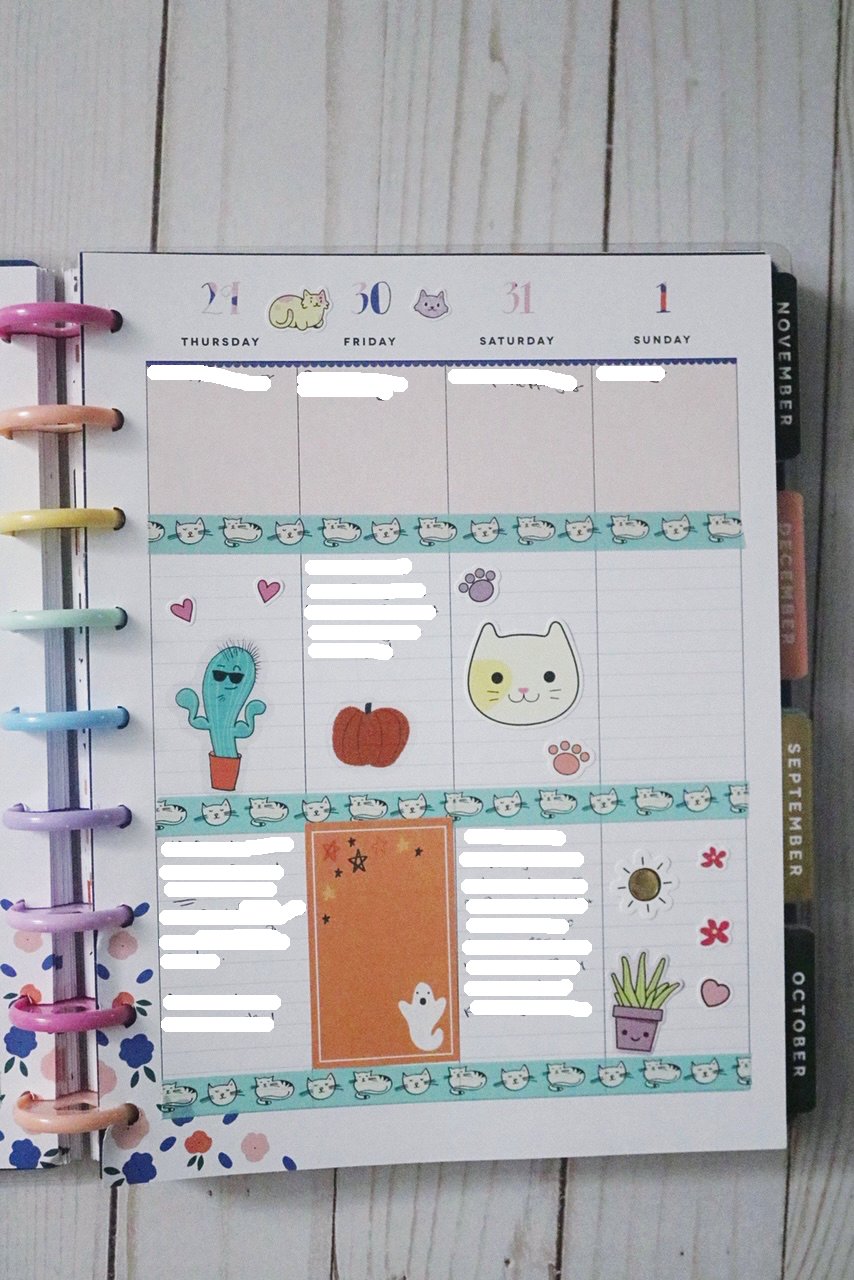 If you couldn’t already tell, I went with a cats theme for this week. I’m not even sure why since I’m not a big fan of actual cats but I can’t deny that cat stickers and washi tapes are adorable! On September 30th I decorated my room and home office for Halloween so that was fun! I can’t wait to start using all my fall and Halloween stickers soon.