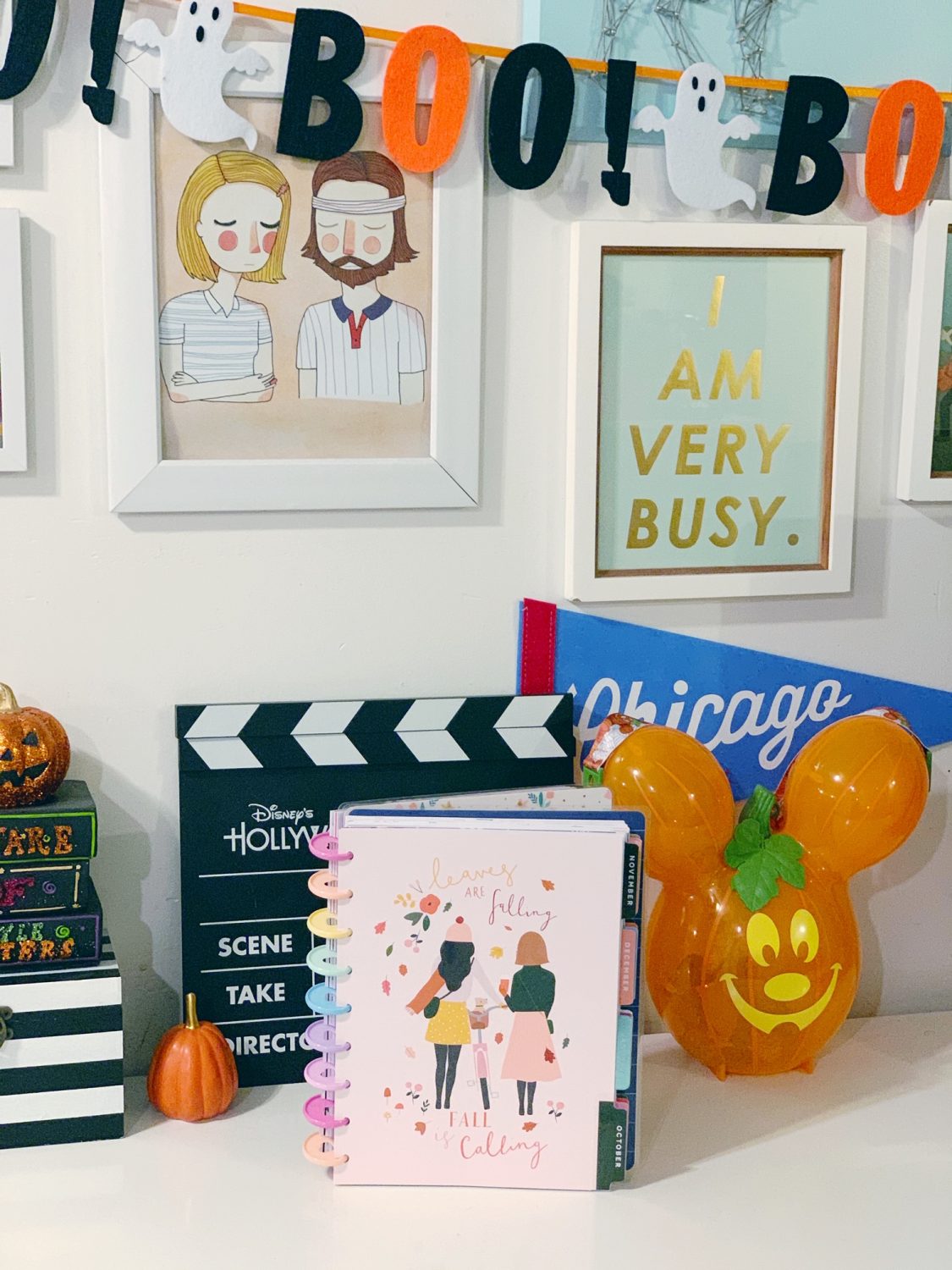 Happy November! It’s a new month, which means it’s time to share last month’s planner spreads. I had SO much fun decorating my October weekly layouts. As you’ll see, I kind of went overboard with the Halloween themed washi tape and stickers. (What can I say, I love holidays!).

Speaking of holidays, now that Halloween is over that means it’s officially Christmastime. (Well, in my eyes anyway). Yes it’s November 1st and yes, once I get home from work I plan on putting up my Christmas tree. #SorryNotSorry. 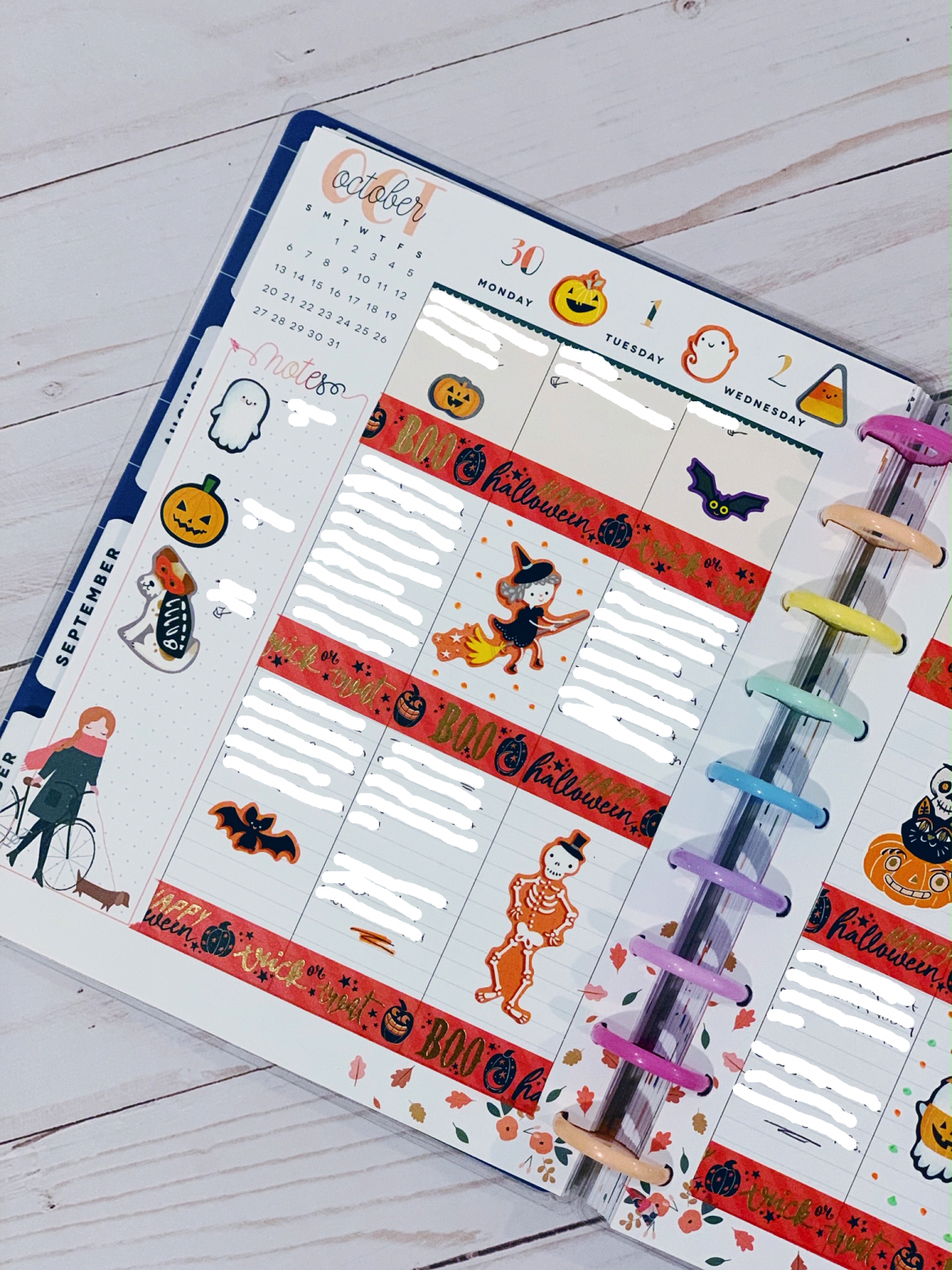 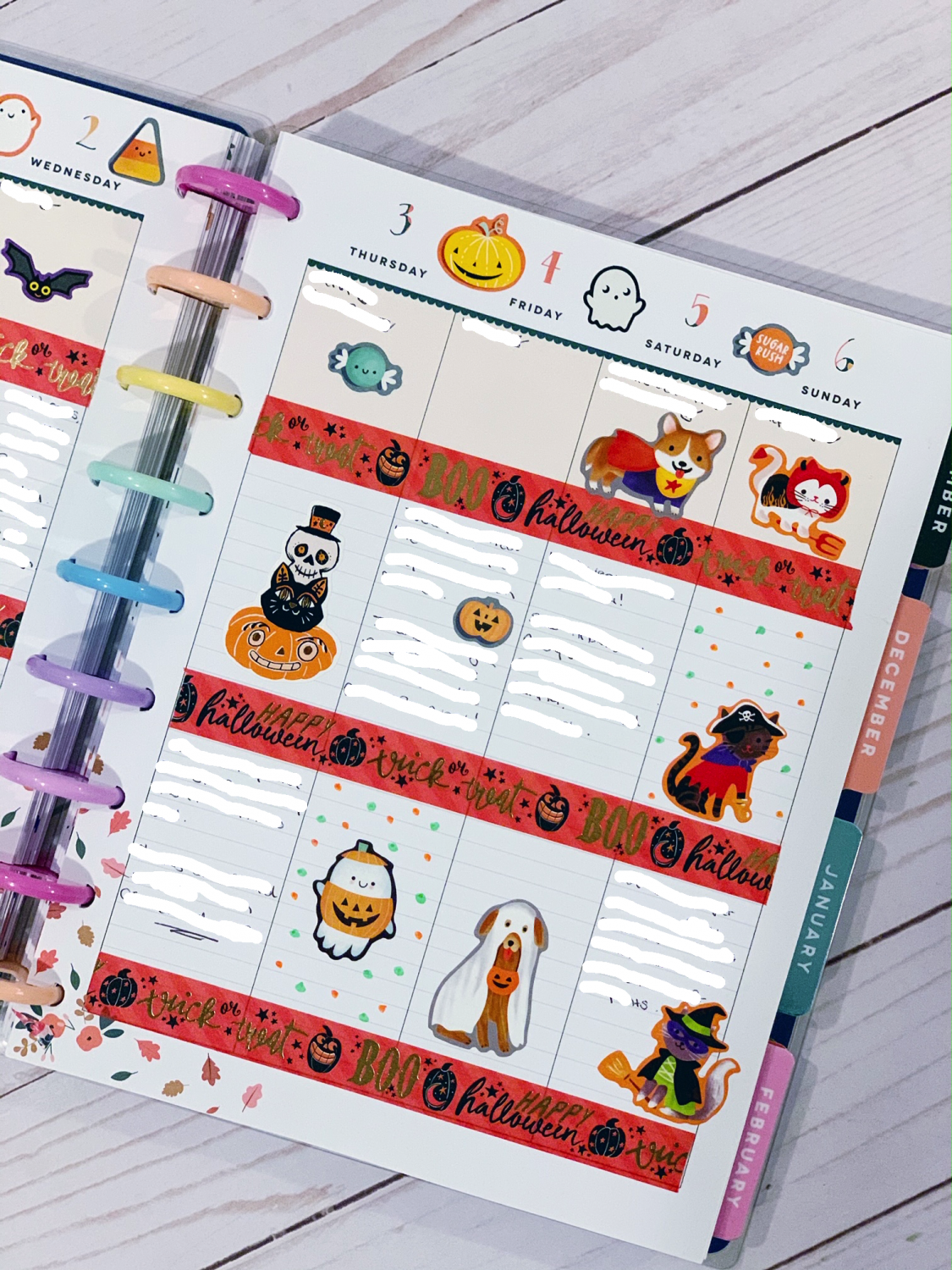 I feel like the first week of October went by super fast because I was just starting my new job/position. It was very go, go, go. I was shadowing people, then going from meeting to meeting. On Saturday (10/5), I took my little angel puppy Loki to the vet. Hence the Halloween dog stickers.

Question: Does anyone else just refer to their adult dogs as puppies? Above I called Loki my “little angel puppy” but he’s turning five years old soon. He’s forever a puppy to me though. 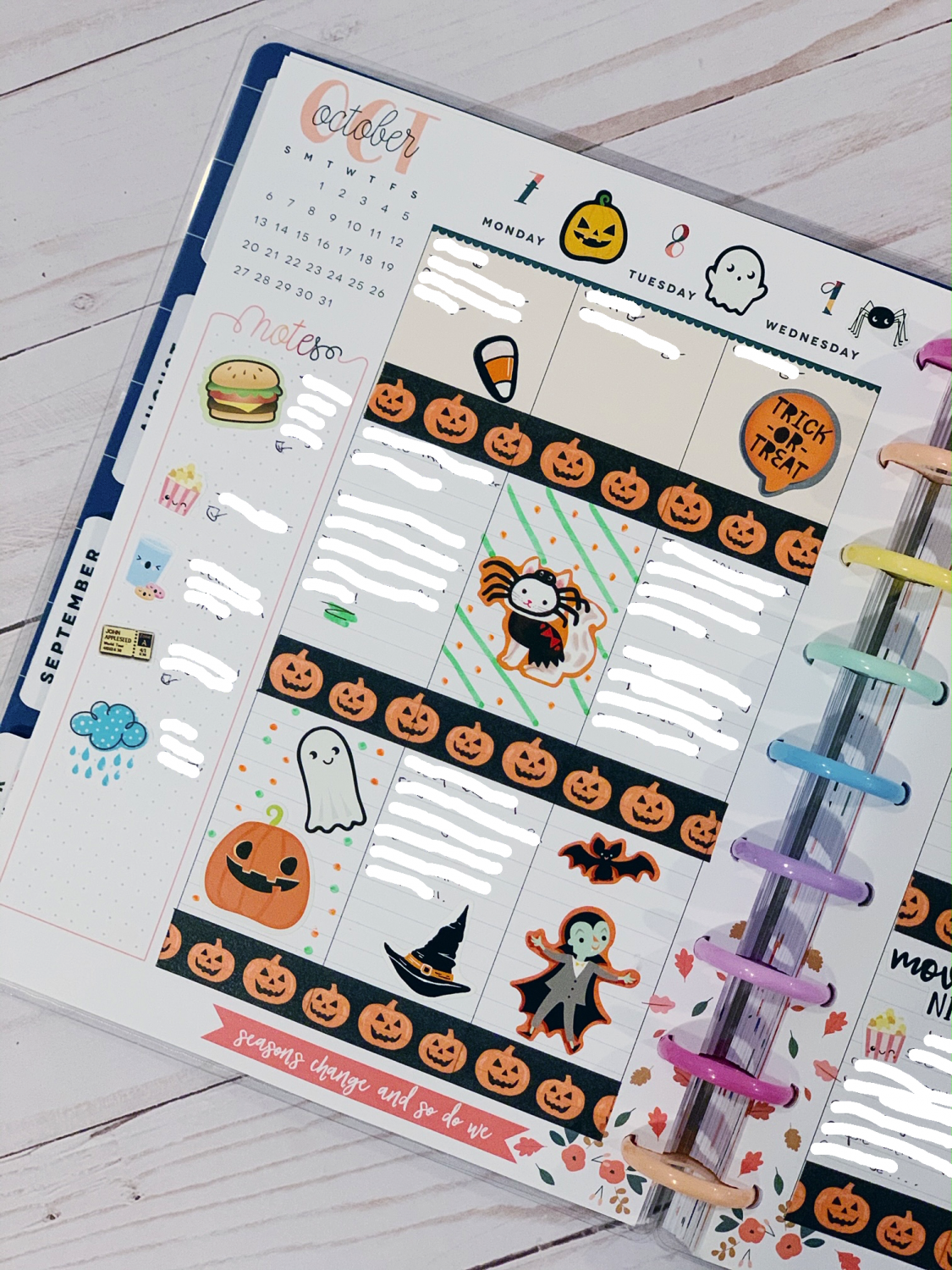 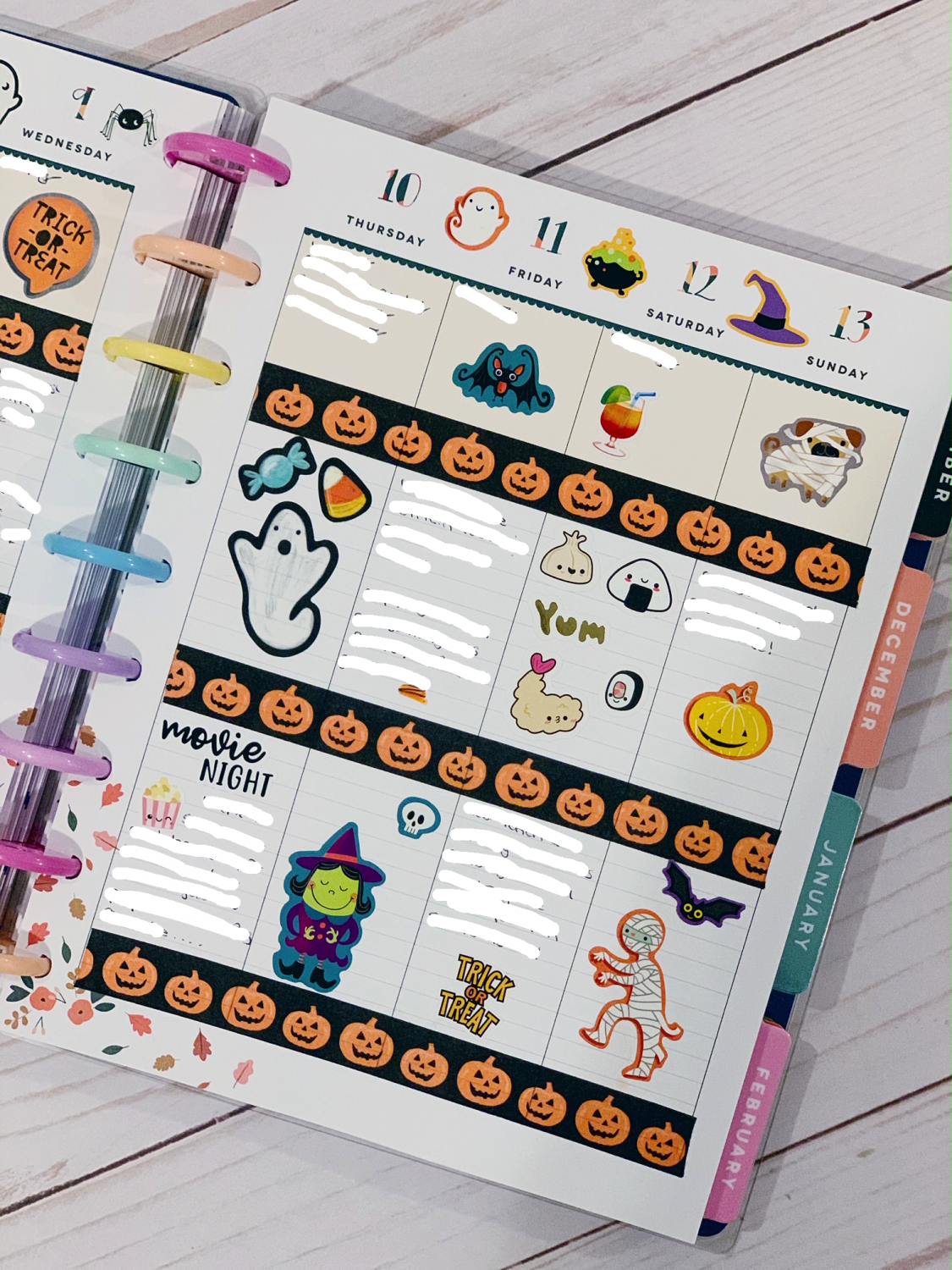 The second week of October was pretty eventful. On Thursday (10/10) I went to see Joker. (How cute is that kawaii popcorn sitcker?). I’m not going to lie, I wasn’t a huge fan. It was okay, don’t get me wrong, but people were acting like it was this amazing cinematic masterpiece. It’s wasn’t to me.

I also had a little lunch date with all my new co-workers. (As represented by the burger sticker under “notes). And I celebrated my one year work anniversary at my favorite Japanese restaurant.  (Hence all the kawaii food stickers under 10/12). 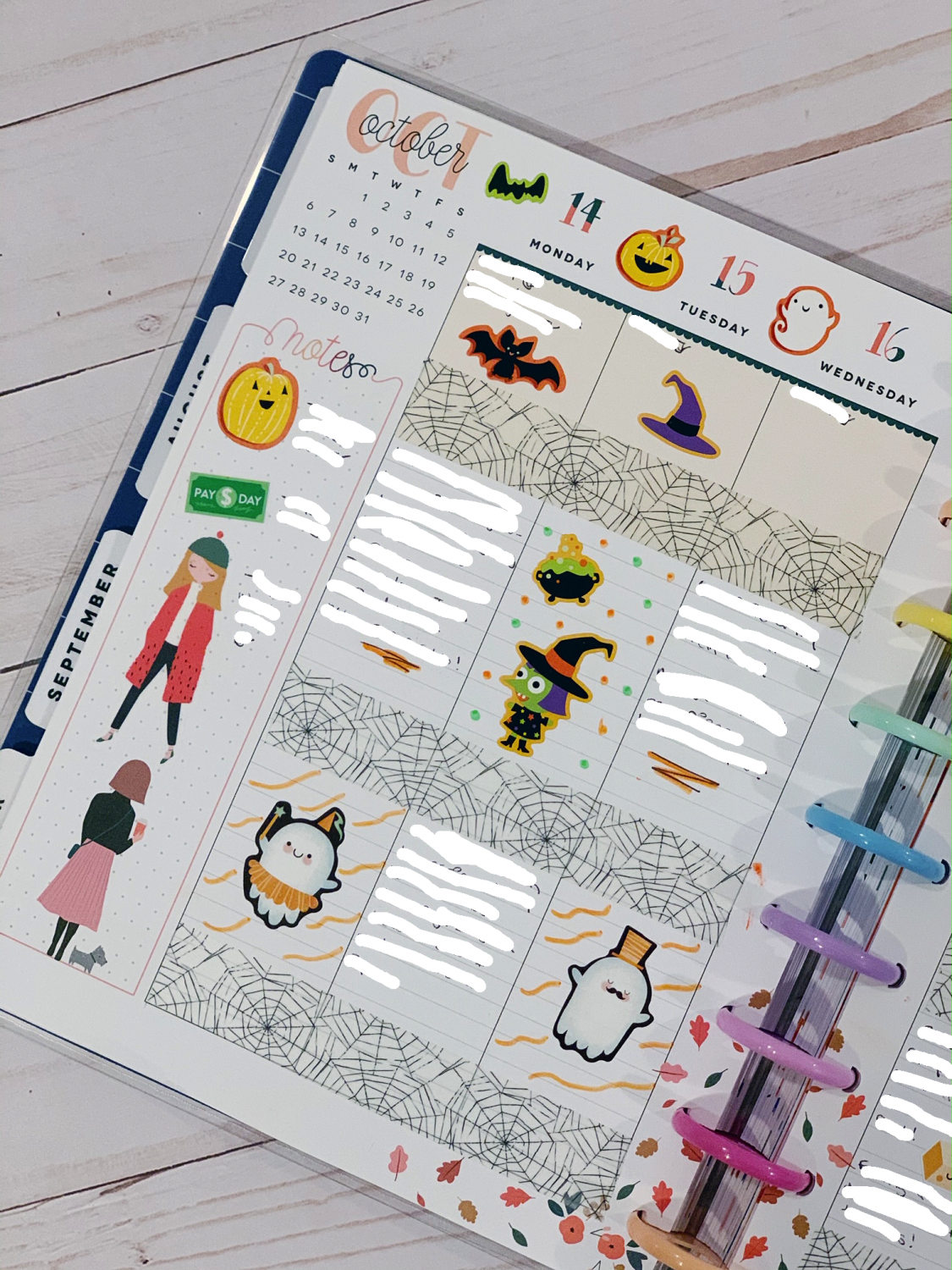 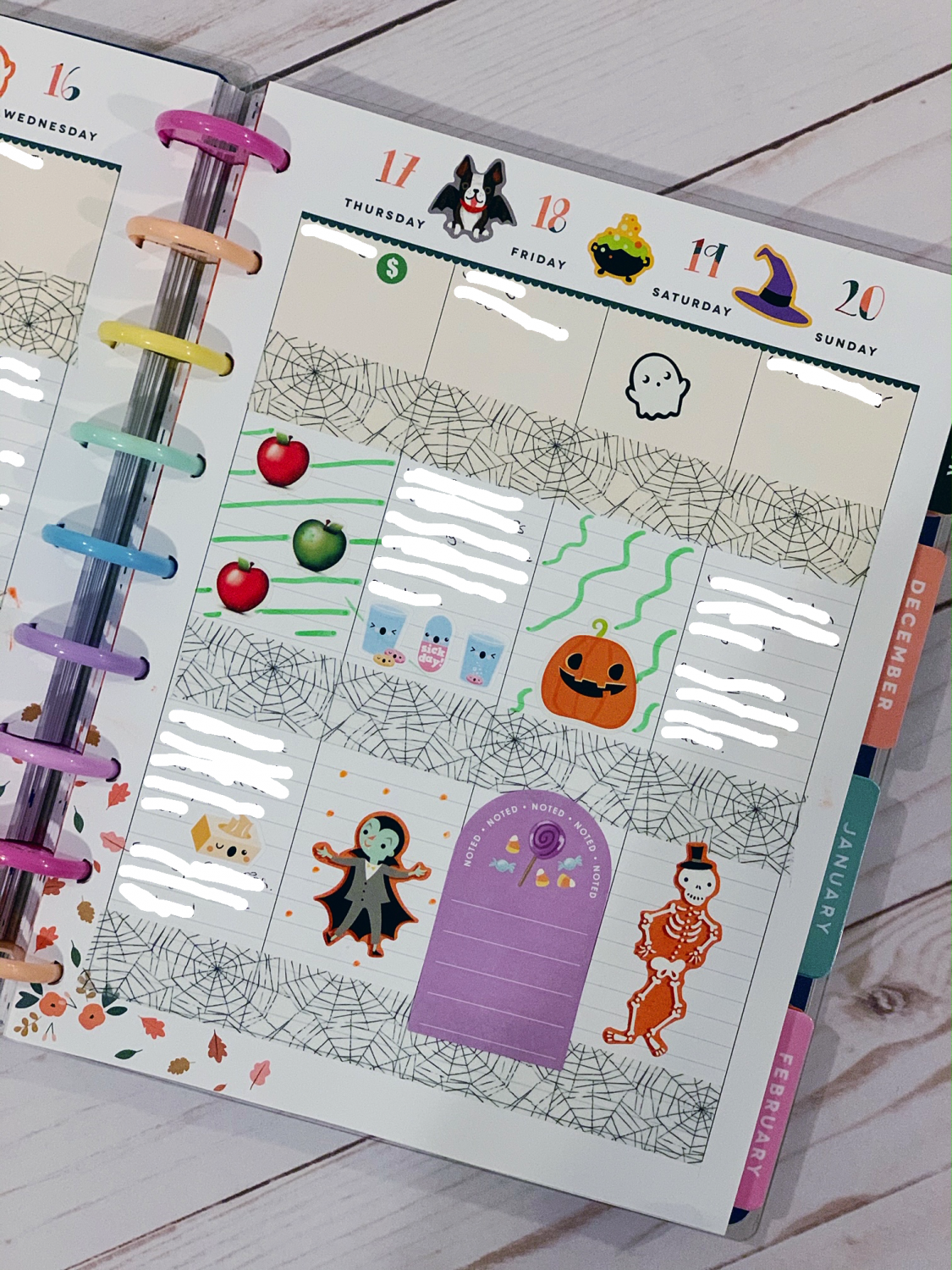 During the third week of October, the Chicago Public School teachers went on strike. I marched with them (my moms a teacher) the first two days. That’s why there’s apples under 10/17. This week was also my payday week. (You can see the Payday sticker on the side under (notes) and the little dollar sign under 10/17). 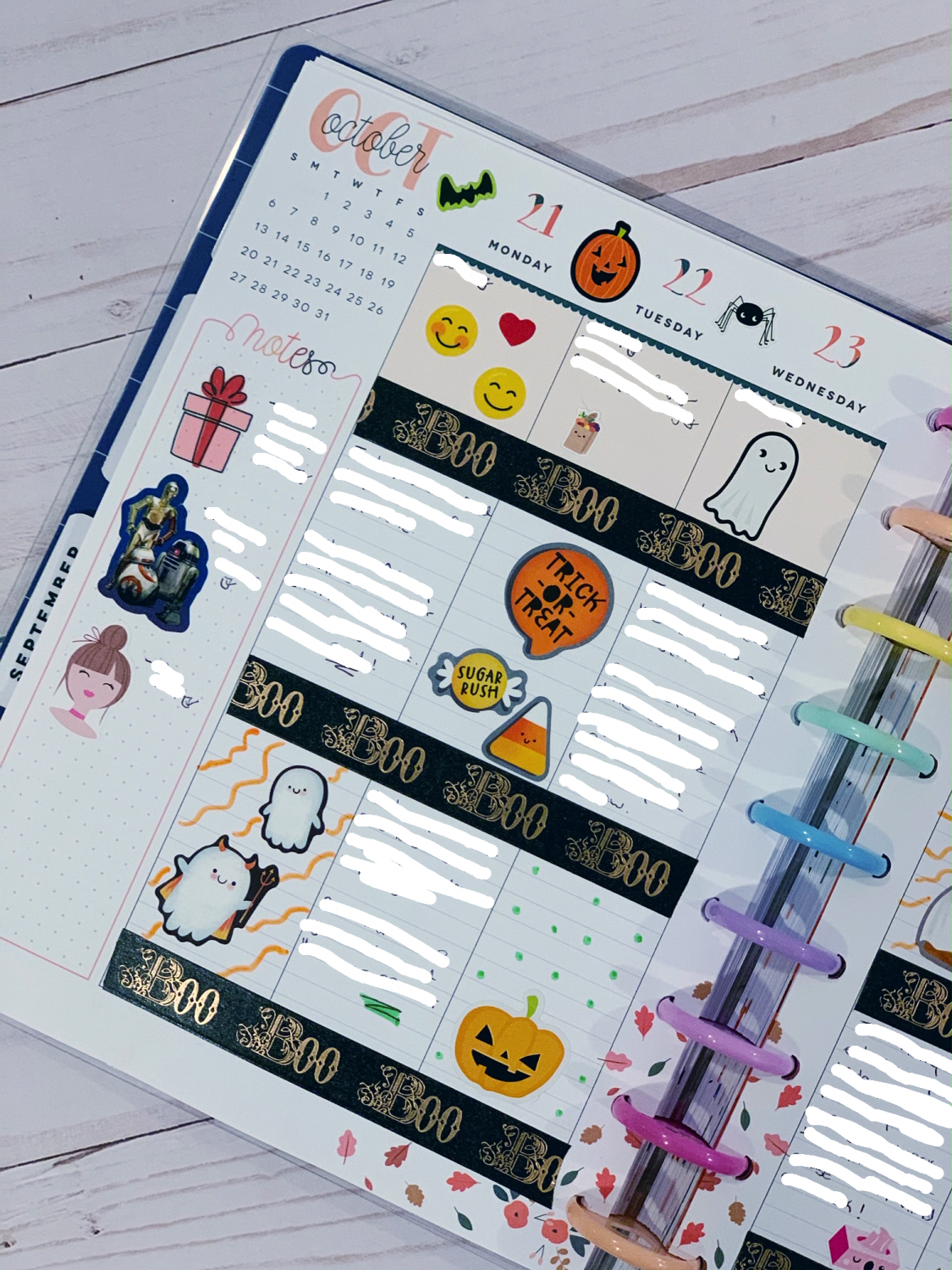 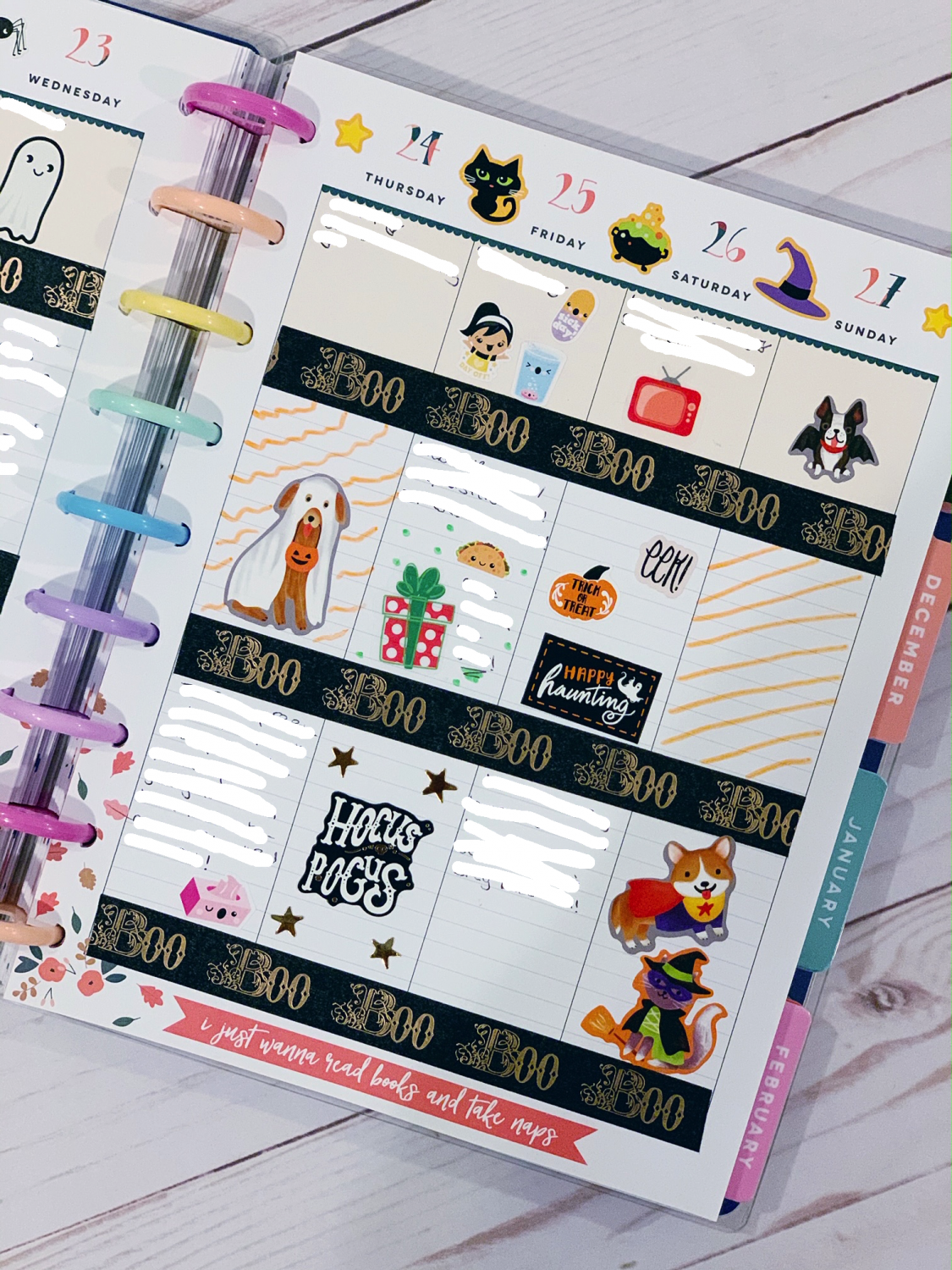 If you couldn’t tell by now, I was going ALL IN with the Halloween stickers! This week I bought my tickets for Star Wars: The Rise of Skywalker. (I’m not a big fan of the Star Wars sticker I used under the “notes” but I didn’t have any “cute” Star Wars stickers. Oh well!).

I also got a little sick on Thursday (10/24) so I took Friday (10/25) off. Even though I was sick, I was still able to make it to dinner with my sisters that Friday night (we went to a Mexican restaurant so I used a taco sticker!). 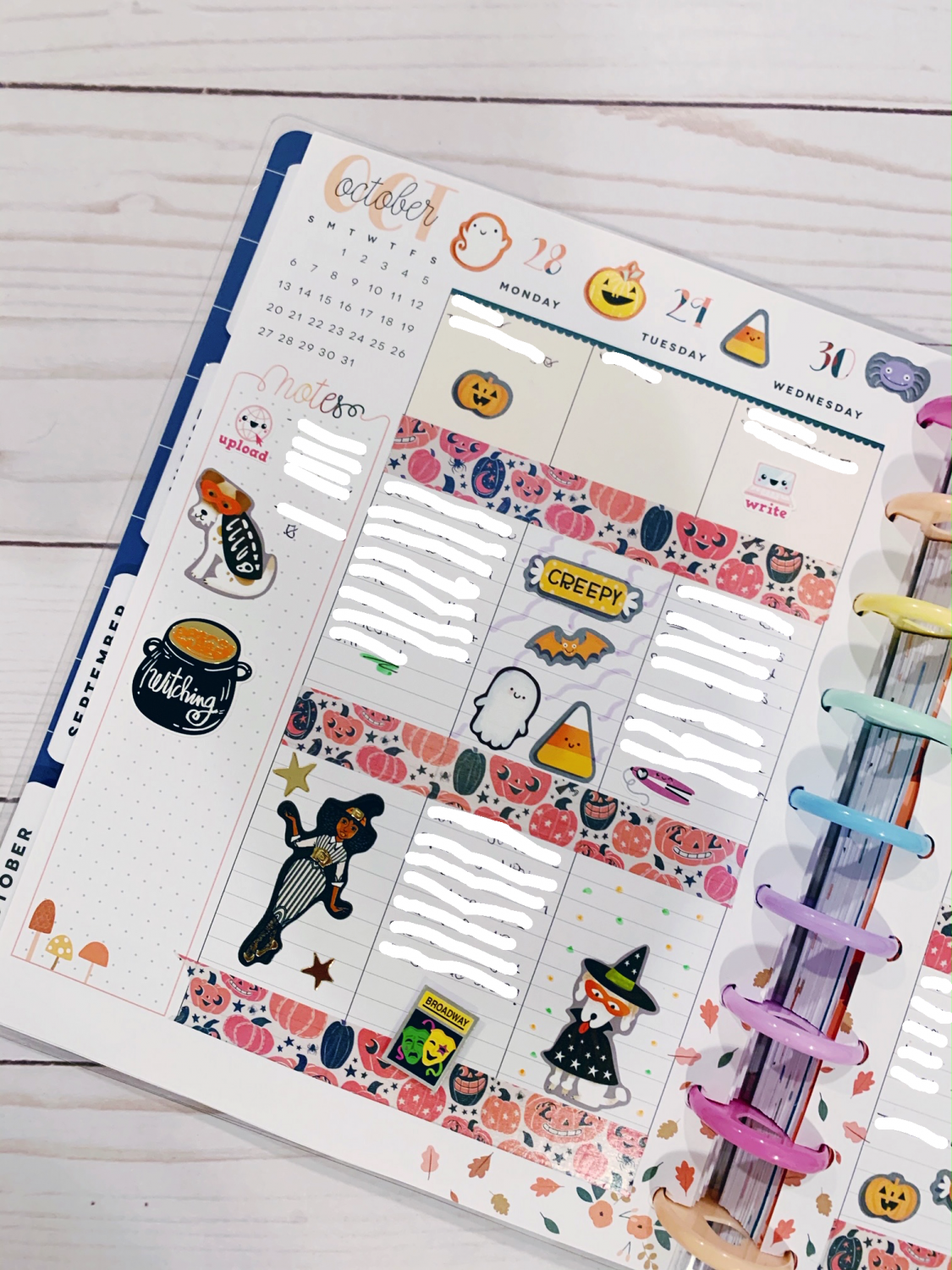 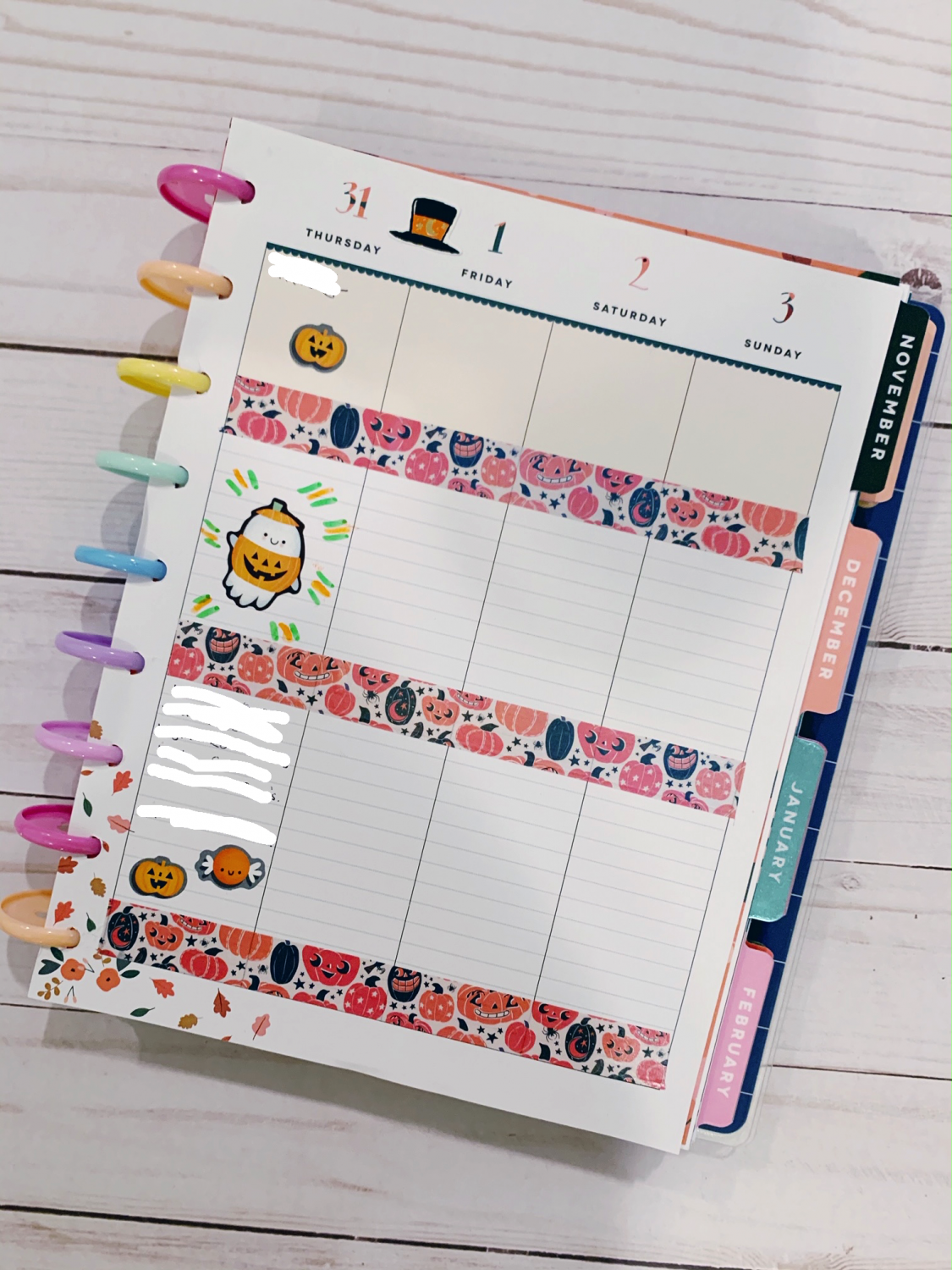 Since this week isn’t technically over yet, I only have my planner decorated up until last night (Halloween). But since yesterday was the last day of October, I still wanted to include this layout in today’s post!

October ended on a nigh note. I won opening night tickets to see Latin History for Morons on 10/29. (Hence the playbill sticker!). I also spent the last week of October writing a ton of new blog posts that I can’t wait to share with you all!

I can’t wait to start decorating my planner for November tonight!