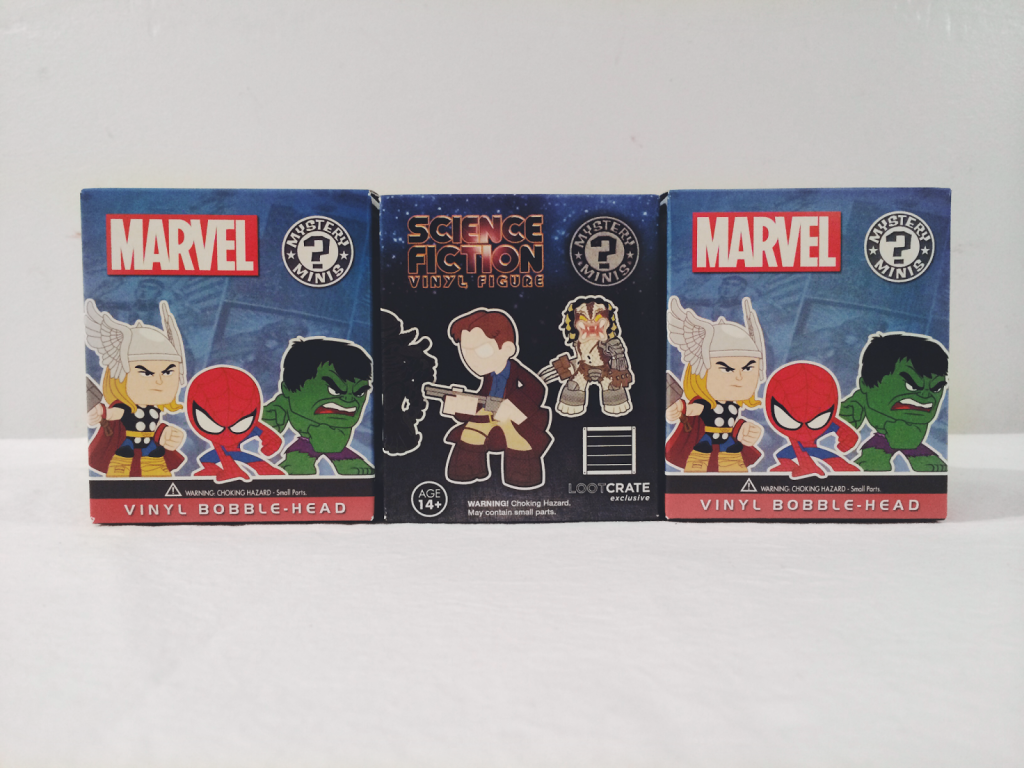 This edition of Blind Box & Bag Roundup features two (and my first ever) Funko Marvel Mystery Minis and the new Funko Science Fiction Mystery Minis! I’ve been wanting to start collecting the Funko Marvel series for a while now but I didn’t like the fact that they were bobble heads. For some reason I’ve always disliked anything that was a bobble head (they’re a little creepy!) After seeing other people open and review them, I realized that I really liked them (and it doesn’t help that I’m a HUGE Marvel fan!) I decided to only get two because I didn’t know if I’d like them (I definitely should have got a couple more because they’re AWESOME!) 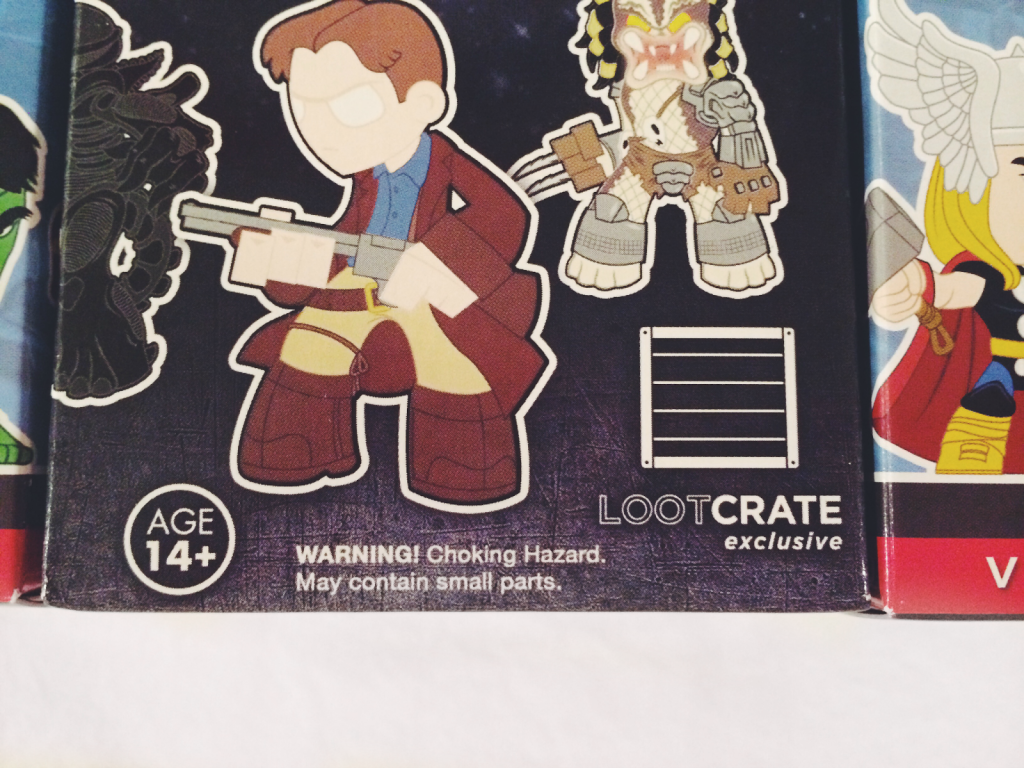 I was super excited about opening the Funko Science Fiction Mystery Mini because not only is it the newest mystery minis from Funko, it’s also a Loot Crate exclusive (If you guys don’t know about Loot Crate or aren’t a member, you should definitely check it out HERE!) 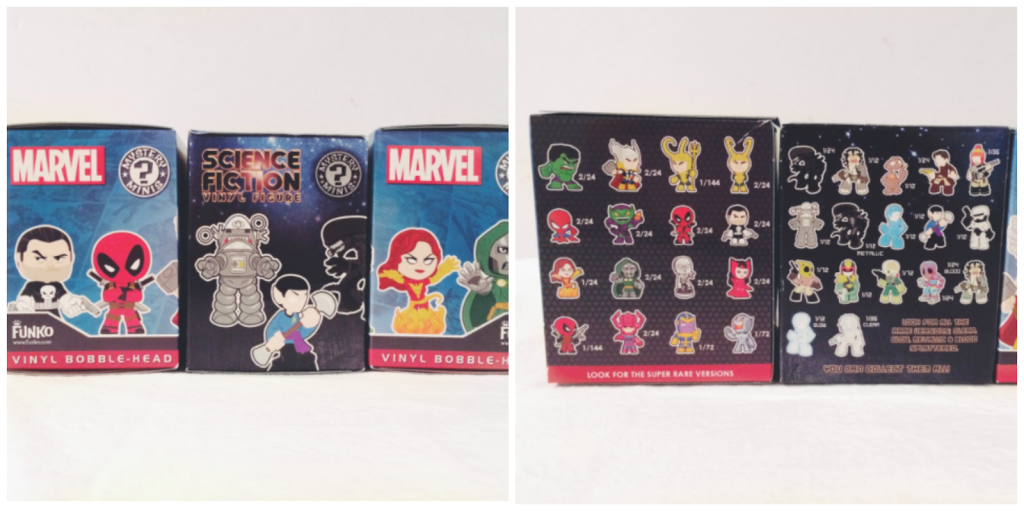 From the Marvel series I really wanted Loki (obviously,) Deadpool, Hulk or Phoenix but they honestly all look super cool so I’d be happy with any of them! The Sci Fi one, on the other hand, only had a few characters I actually wanted. Some of the characters (like Predator) look super scary so I don’t really want them lying around the house or on display with my other collectable figures! I really wanted E.T., Spock or Captain Mal! 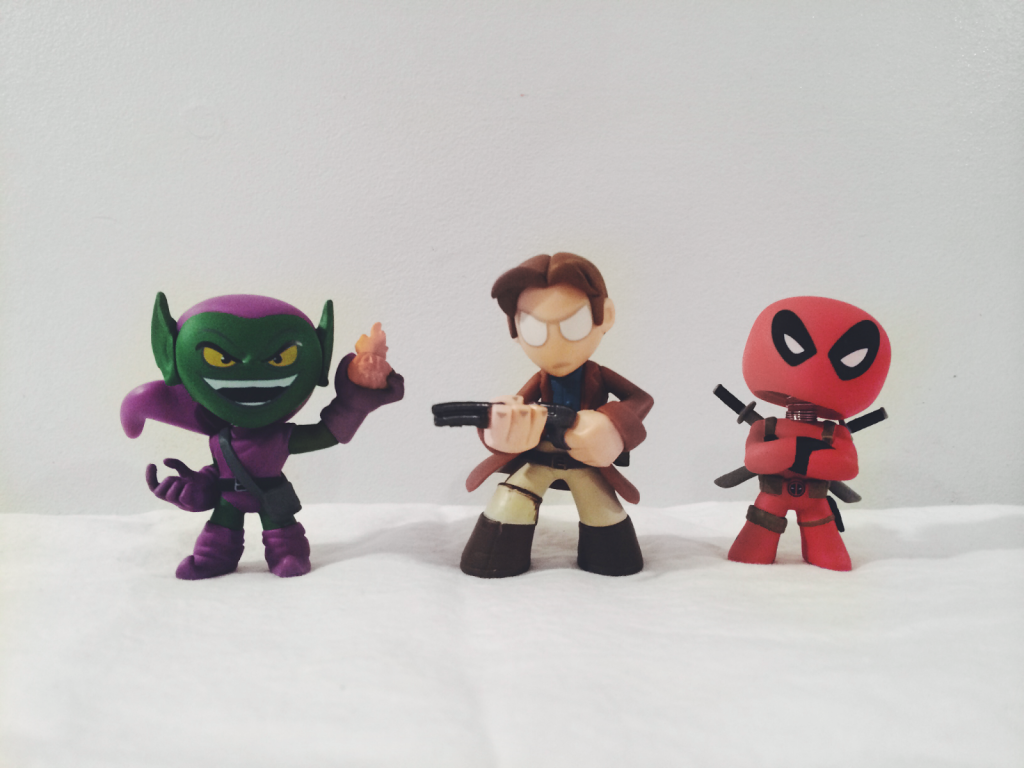 In the end, I got the Green Goblin, Captain Mal (from Firefly) and Deadpool (he’s so awesome!) I’m so happy because Captain Mal (in this pose) is a Loot Crate exclusive and I really wanted Deadpool! The Green Goblin is a pretty cool villain so I’m happy I got him (although I really did want at least one Loki!) I’m definitely going to be picking up a few more Marvel Mystery Minis in the future!
Be sure to check out Blind Box & Bag Roundup 01 -09 HERE!
4 Replies 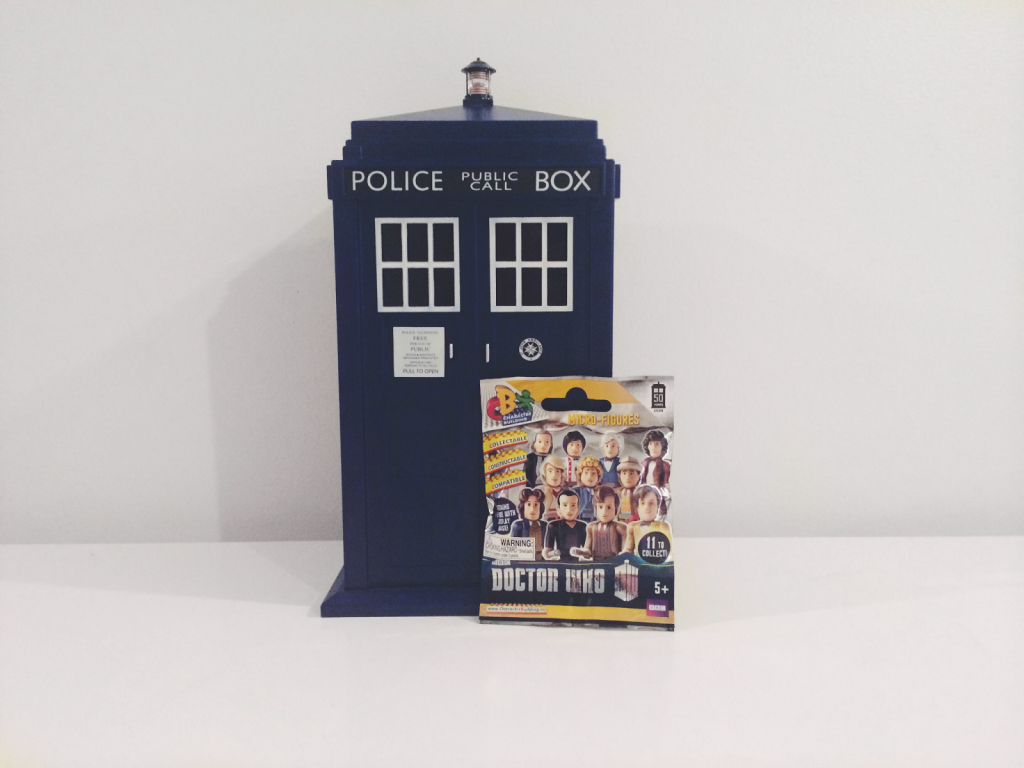 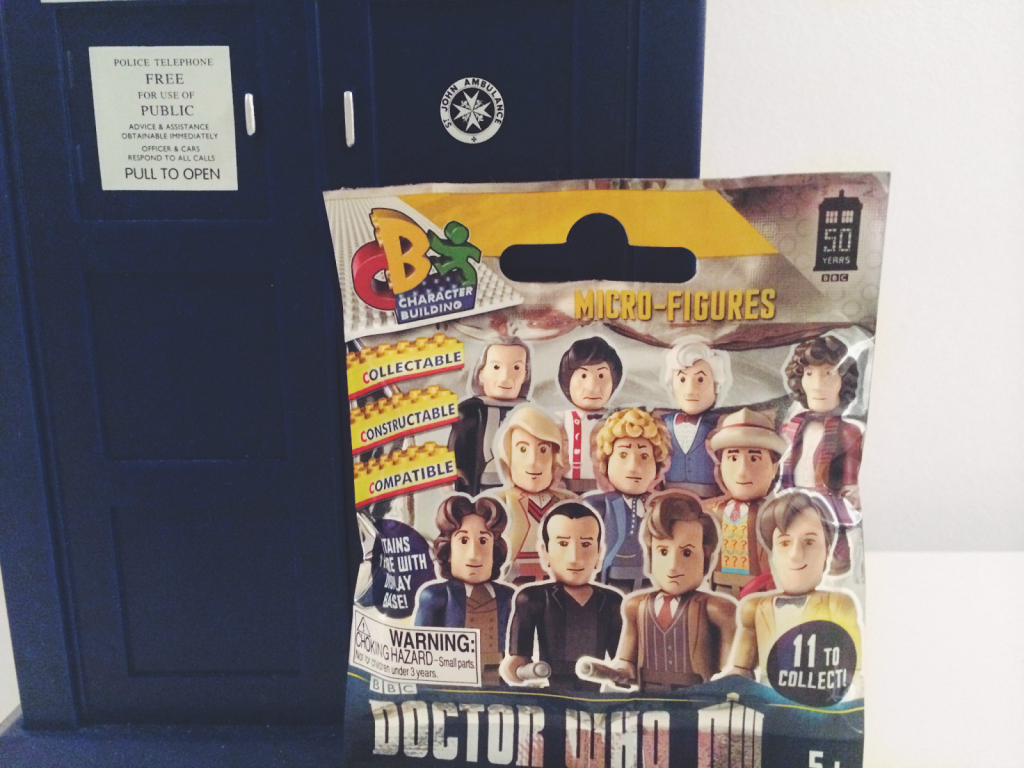 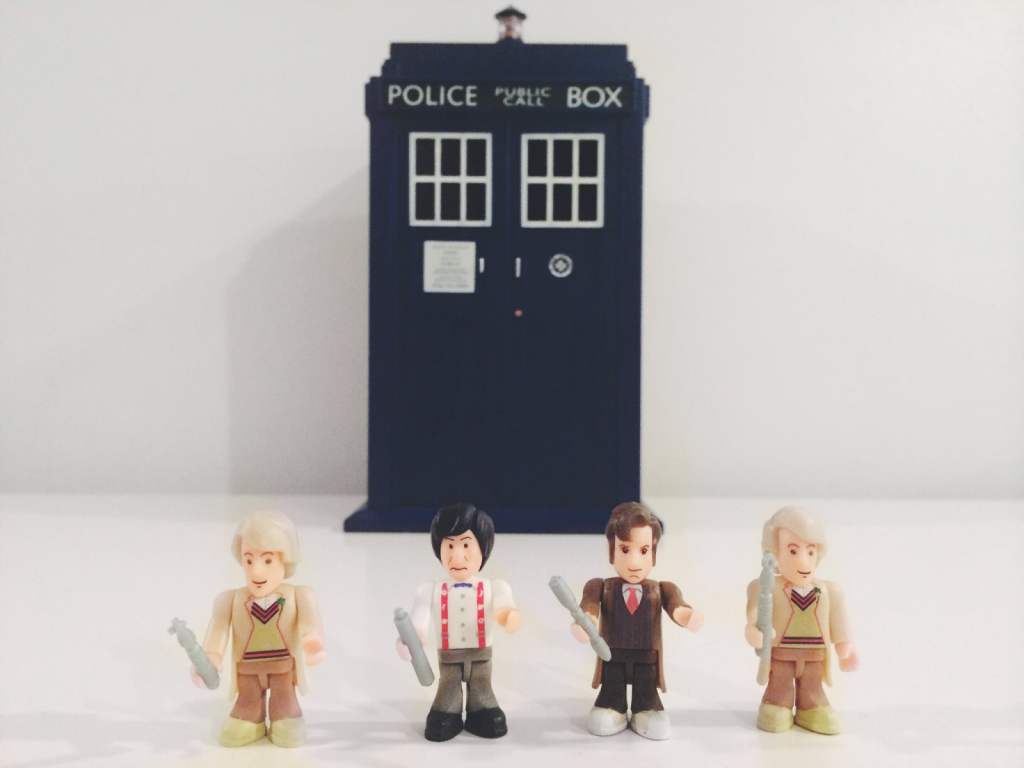 The first figure I got was the fifth Doctor, who was played by Peter Davison. Fun fact: Davison’s daughter (Georgia Moffett) is married to David Tennant aka the 10th doctor, which means Tennant and Moffett’s children’s father AND grandfather were Doctor Who! Talk about a cool family reunion! Speaking of the tenth doctor, I happened to get his figure as well. The third figure I got was the second doctor, who was played by Patrick Troughton. I’m a little bummed I got two fifth doctors, but that’s the risk with blind bag figures!
Any fellow Whovians out there!? Are you excited for Doctor Who tomorrow?
Be sure to check out Blind Box & Bag Roundup 01 – 08 HERE!
6 Replies 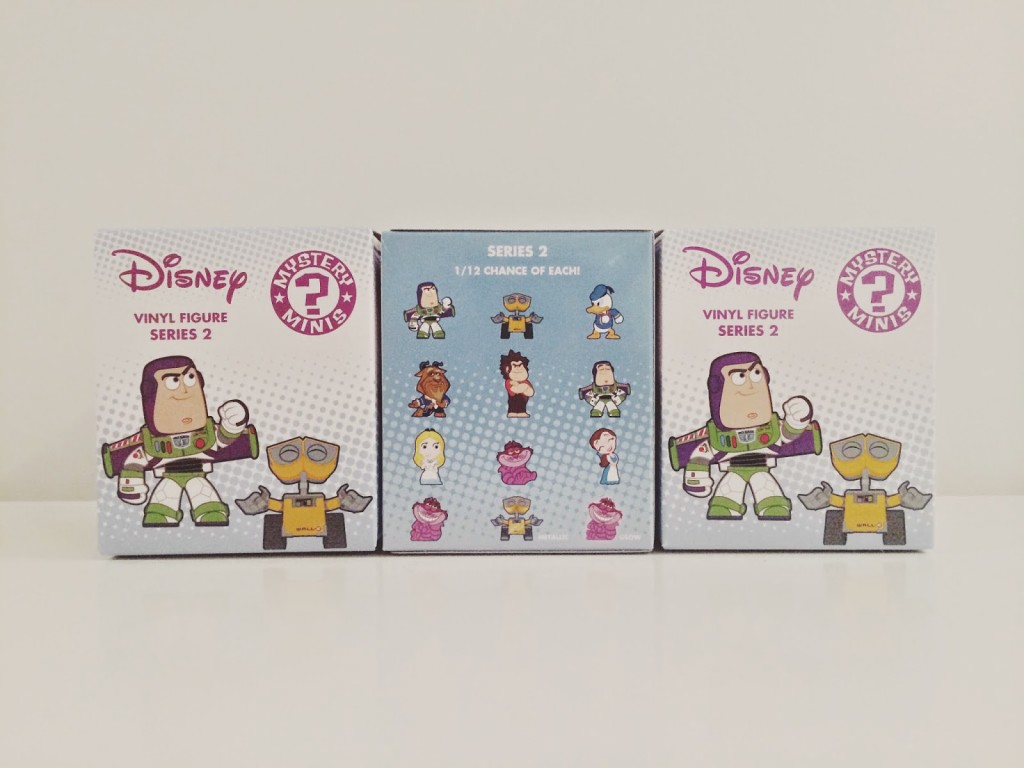 In this edition of Blind Box & Bag Roundup, I’ll be opening up three 2014 SDCC Exclusive Funko Disney/Pixar Mystery Minis. Unfortunately, I couldn’t make it San Diego Comic Con this year (but I will be attending Chicago Comic Con this month and NYCC in October) but luckily Barnes & Noble was selling a few Funko SDCC exclusives. From the SDCC Exclusive Funko Disney/Pixar Mystery Minis you have the chance of getting Buzz Lightyear (in two different poses), Donald Duck, Ralph from Wreck-It Ralph, Beast, Belle, Alice, Wall-E (one regular, one metallic) and Cheshire Cat (there are two different poses and a glow in the dark option.) I really wouldn’t mind any of the figures, but I really want Belle, Wall-E, Alice and Donald Duck! 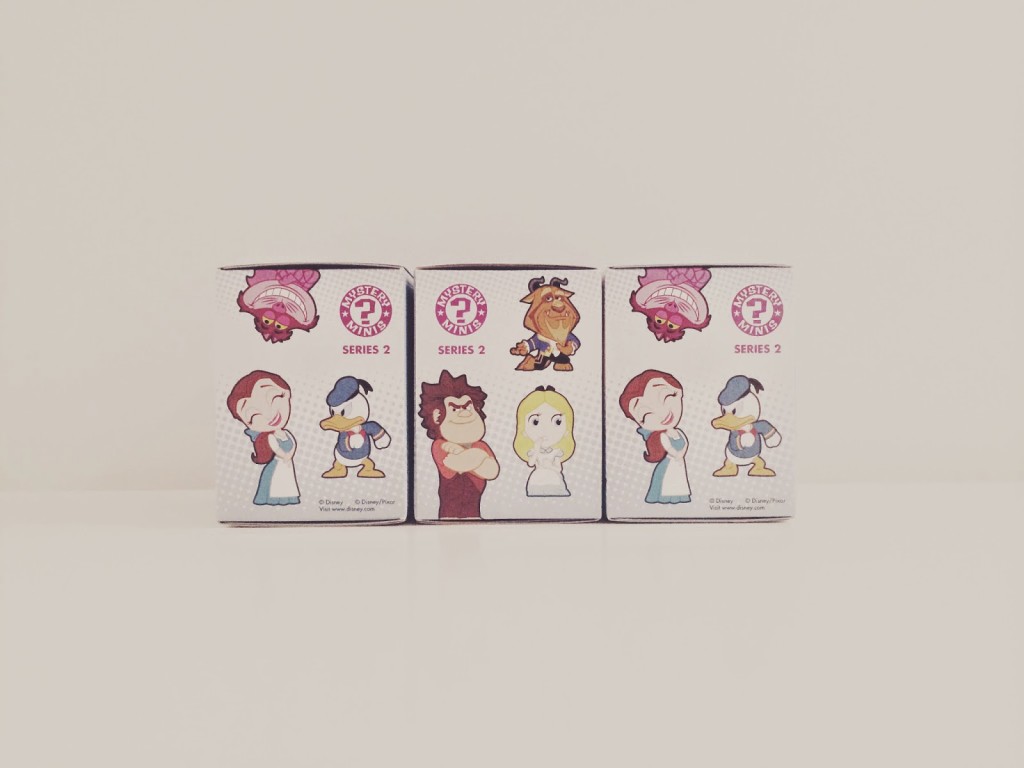 How adorable is the artwork on these boxes? Unlike blind bags (which I usually throw away as soon as I open them) I actually keep some of my blind boxes. I try and keep at least one box from each series of blind boxes (I have at least one Simpsons, Family Guy, Futurama Kidrobot blind box, etc.) I’m definitely keeping some of these boxes since they have the official SDCC exclusive sticker on them (which is pretty cool!) 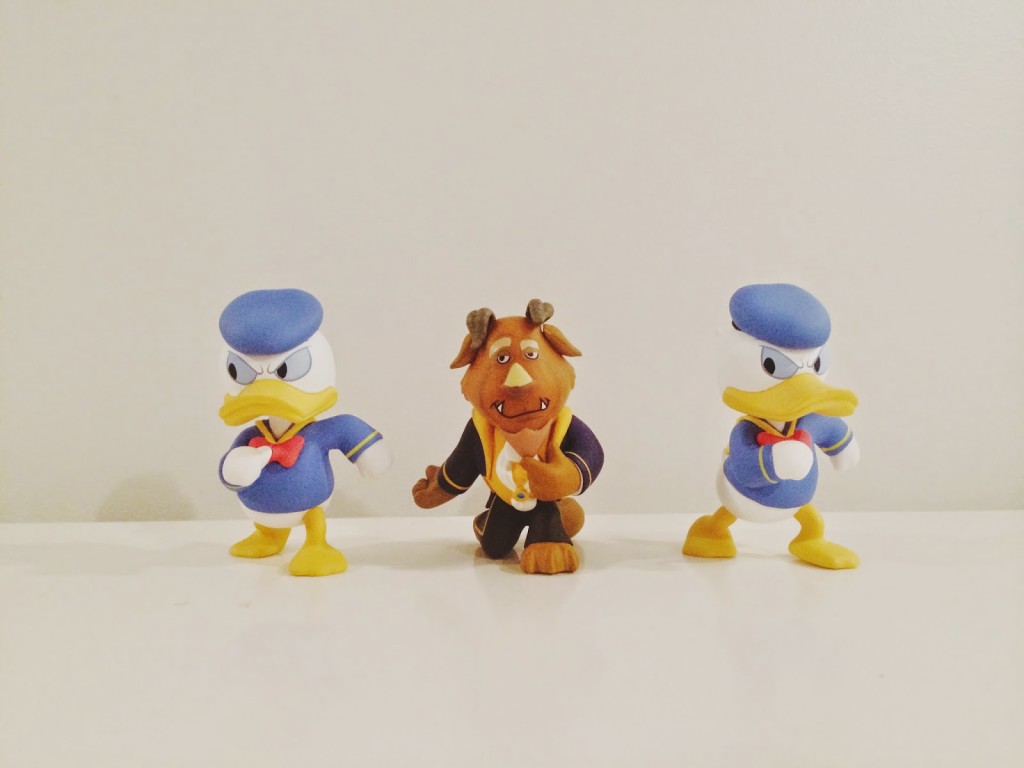 The one major down side of blind boxes is the chance of getting duplicates. Although I wanted a Donald figure, I would have liked to get three different characters to add to my collection. Usually when I get doubles I either trade them (there are several Funko/Kidrobot trading sites) or sell them on ebay. I wound up selling my second Donald on ebay for the exact price I got him (some people don’t like not knowing which figure they are going to get so they opt to buy them on ebay/Amazon so they can buy who they really want.)
Be sure to check out Blind Box & Bag Roundup 01 – 07 HERE!
2 Replies 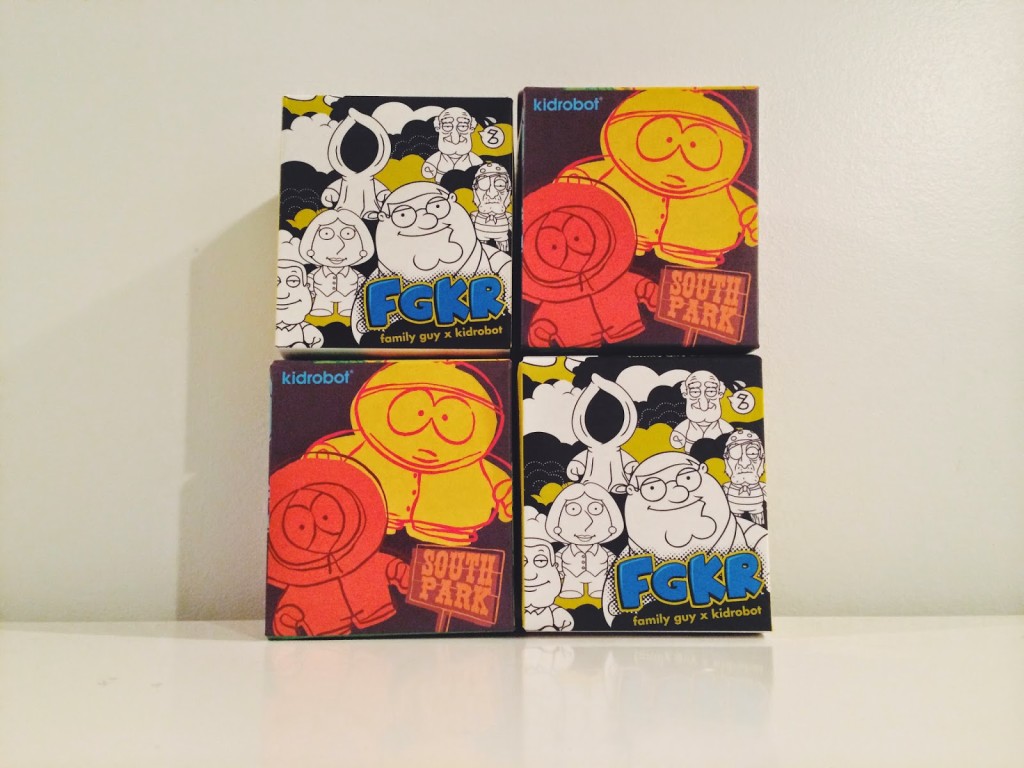 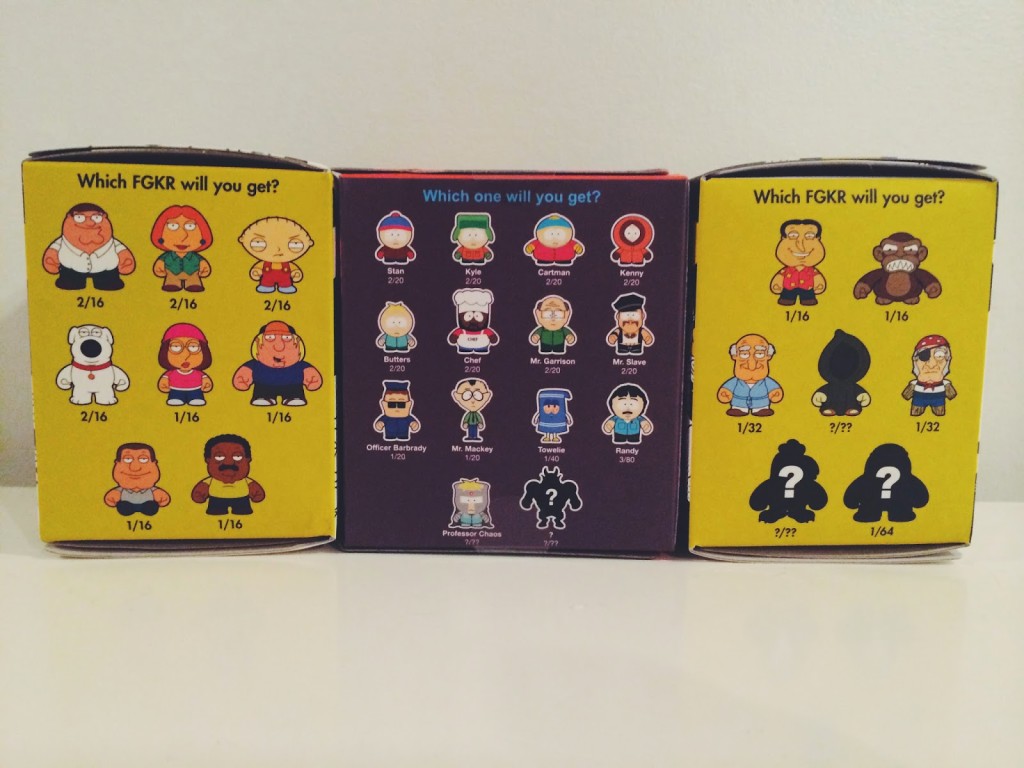 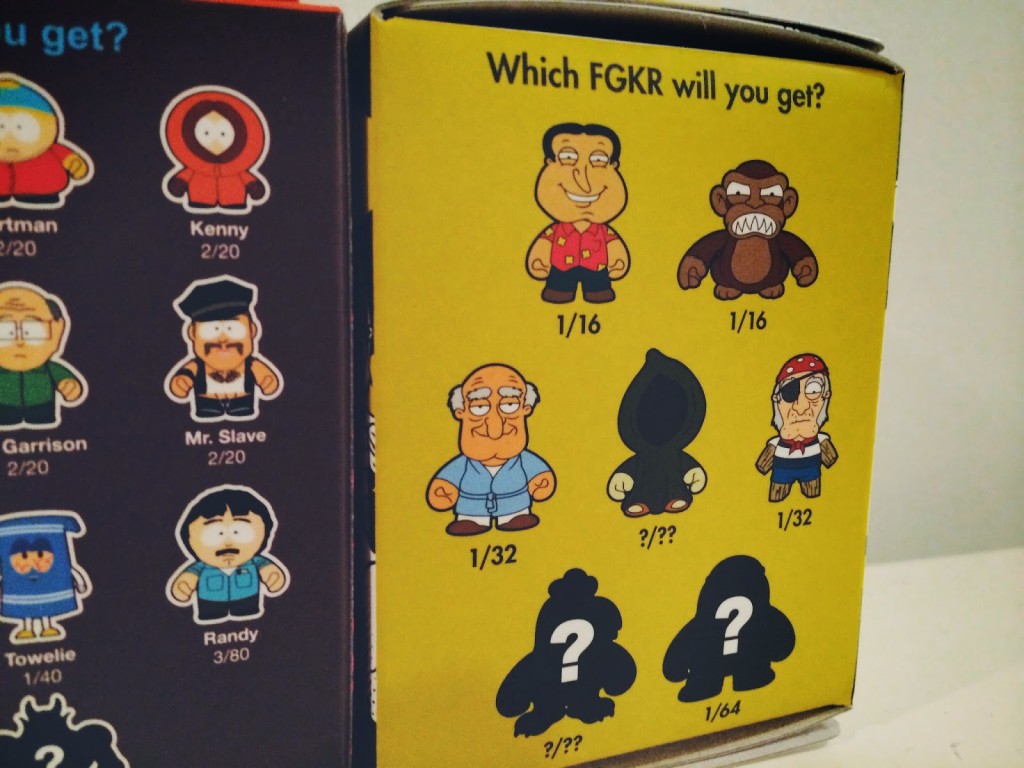 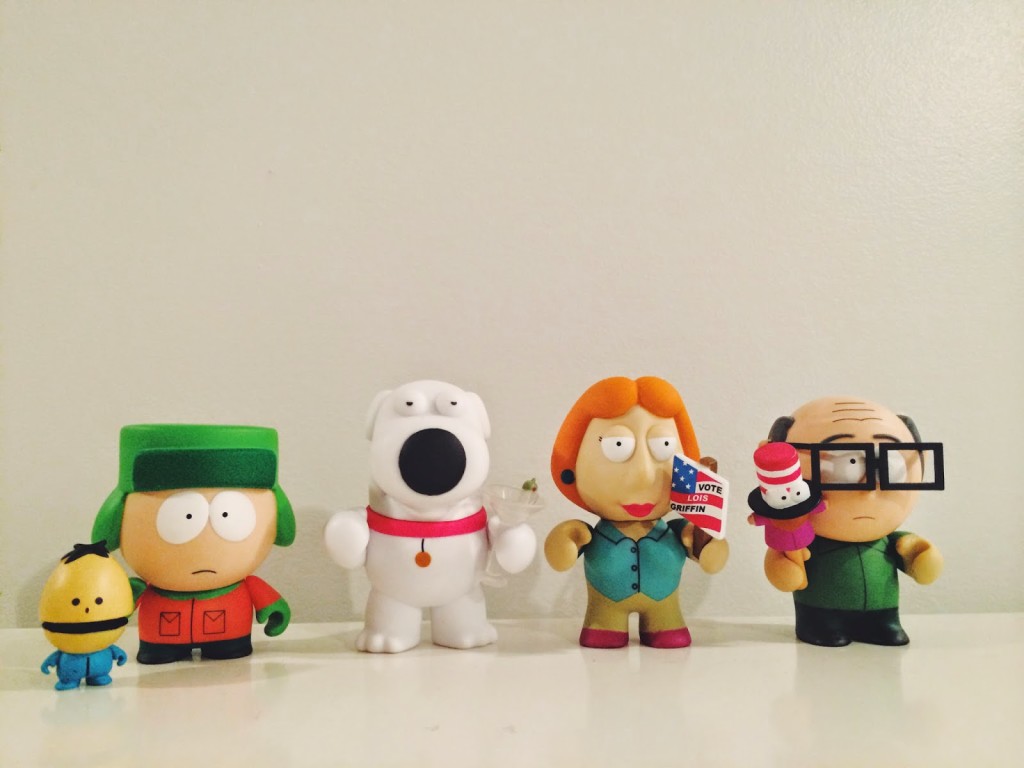 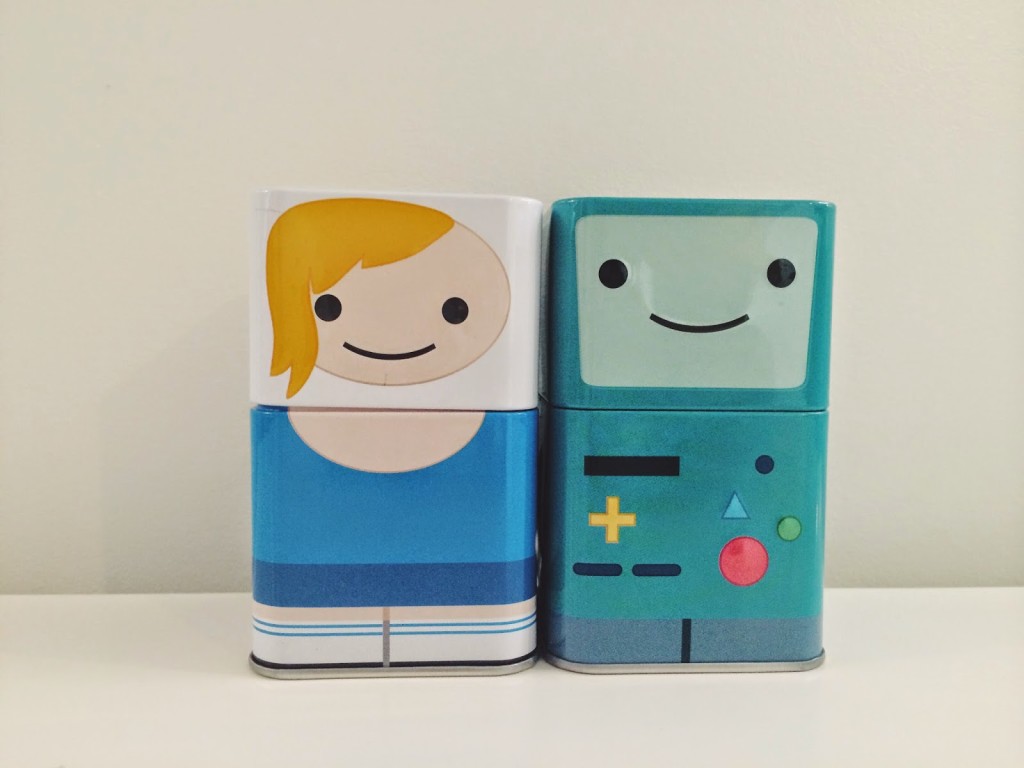 Today’s Blind Box & Bag Roundup features the brand new Funko Adventure Time mystery mini tins! What I really love about this Funko Mystery Minis line is the fact that they come in an adorable tins. The tins come in eight different characters: Finn, Jake, BMO, Ice King, Marceline, Fionna, Gunter, and Lumpy Space Princess. Just because the tin is a certain character doesn’t mean that the figure inside matches the tin. The distribution is still random.
I choose a Fionna and BMO tin because they were the cutest (plus BMO is so awesome!) This series comes with the possibility of 12 figures, including several different versions of Finn and Jake. There is a 1:12 chance of getting each figure. I really hope to get BMO, Gunter, Fionna, Cake or the Ice King! If i’m being honest, I really don’t care because ALL 12 look super adorable! Let’s see who I get! 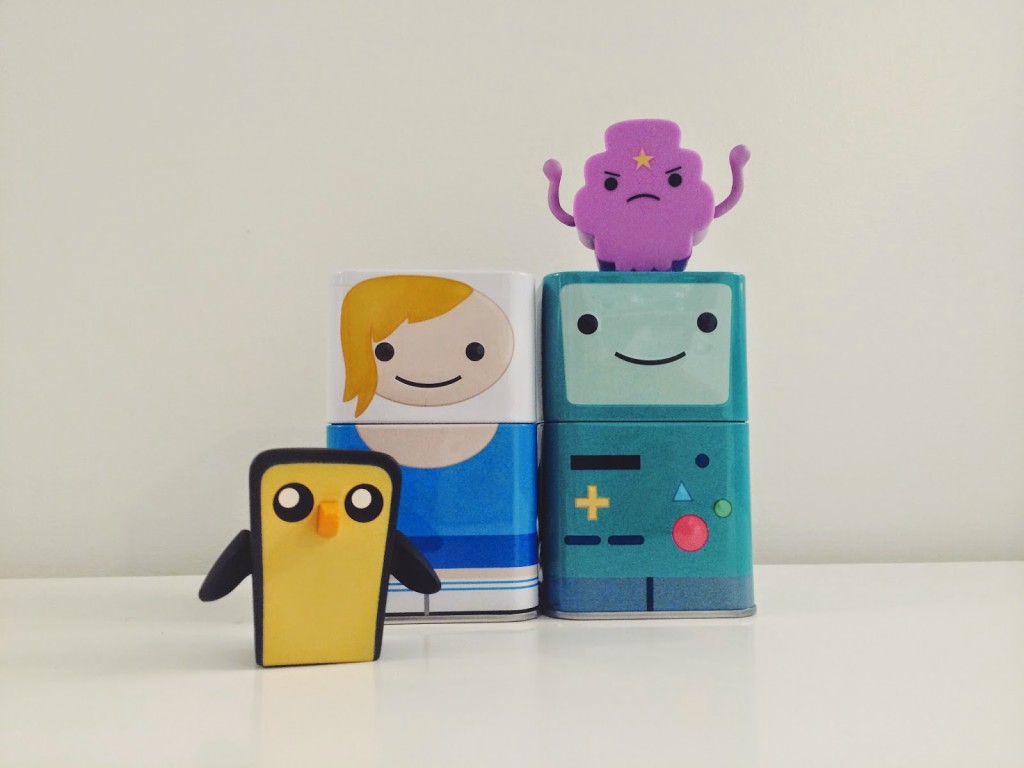 From my Fionna tin I got a Gunter figure (he’s so cute!) and from the BMO tin I got Lumpy Space Princess. These figures are so adorable! My only complaint is that they are very fragile. About 10 minutes after I opened them Lumpy Space Princess lost her arm. But it was nothing a little glue couldn’t fix!
.
Be sure to check out Blind Box & Bag Roundup’s 1- 5 HERE
10 Replies