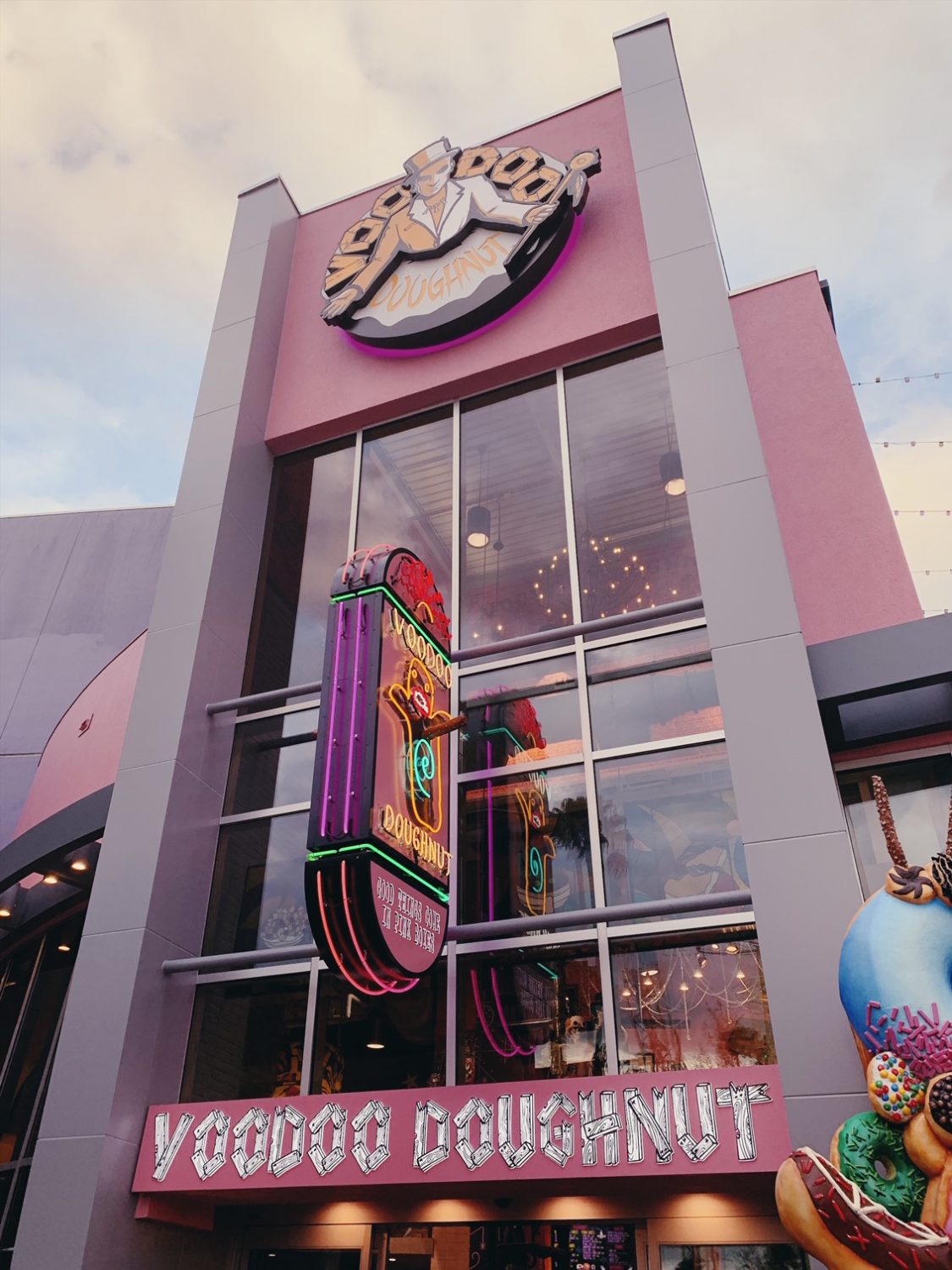 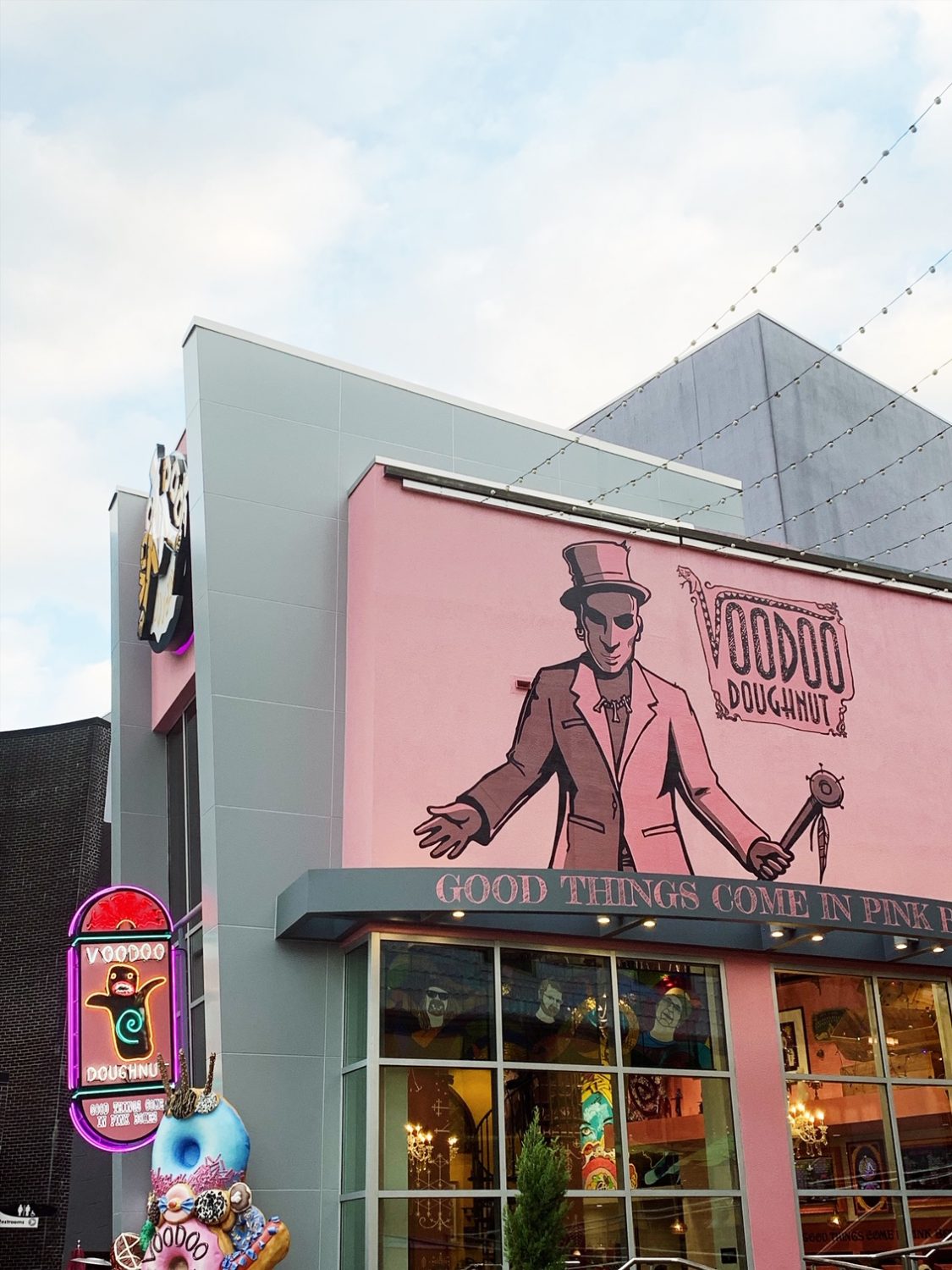 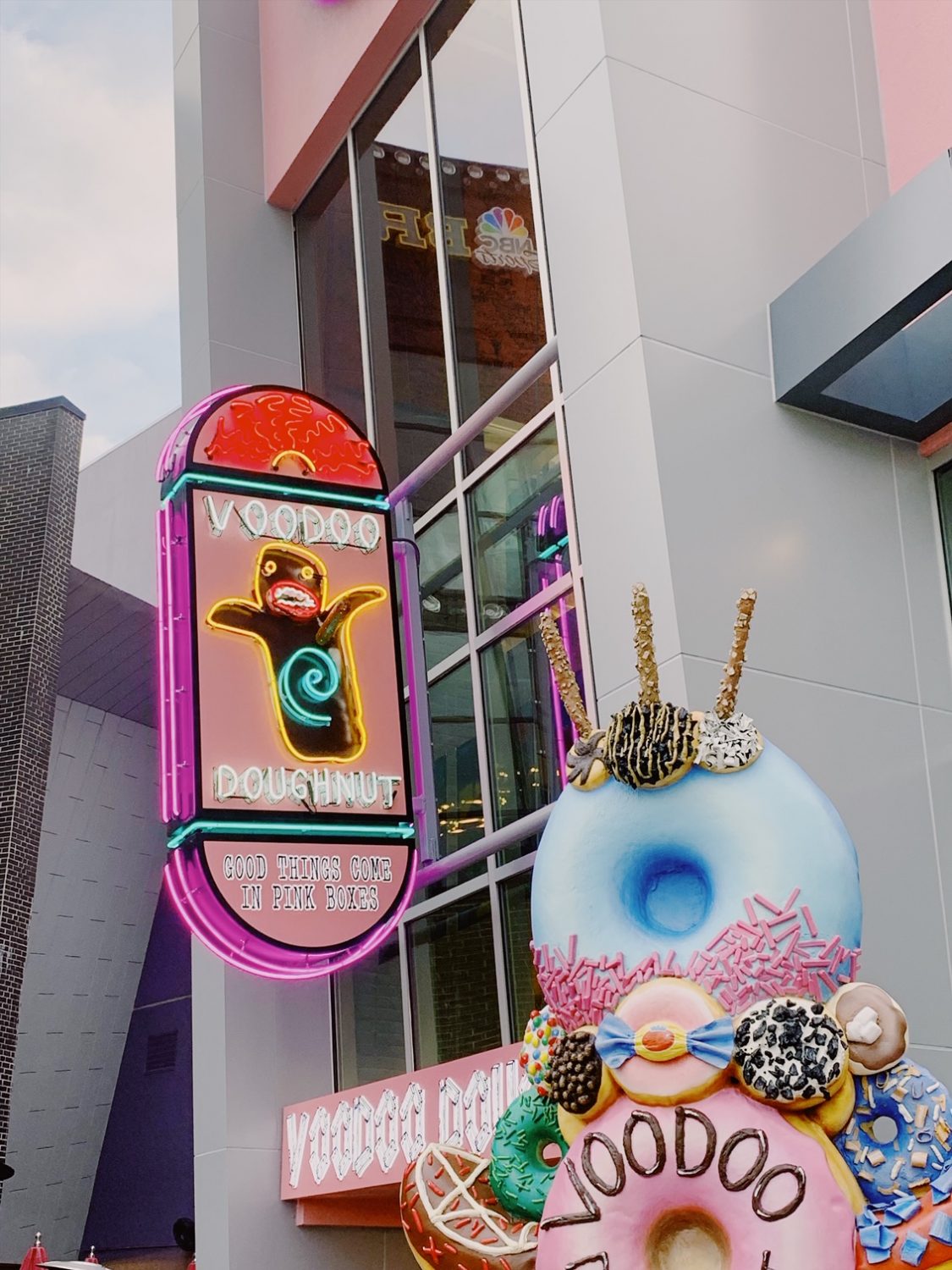 Voodoo Doughnut is located in the middle (sort of, kind of) of Universal CityWalk toward the Universal Studios entrance side. It’s a huge building with giant doughnuts outside of it. Trust me, you can’t miss it. 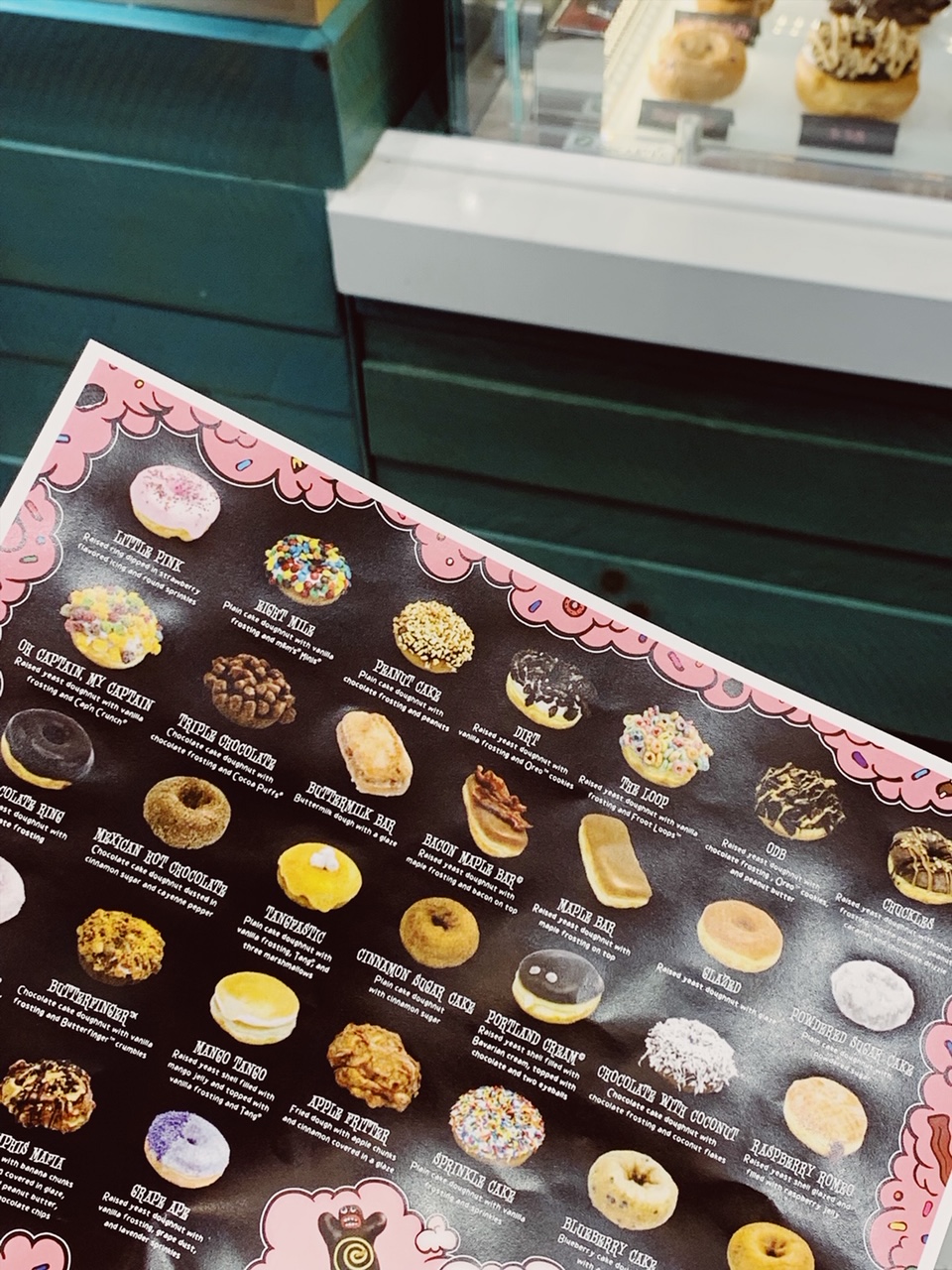 Immediately upon entry (sometimes while you’re still outside) you are given a menu, or as I liked to call it, a doughnut guide. I really liked this because it not only gives you a clear description of each doughnut but a photo as well.

Since the line is usually super long, having a menu handed to you as soon as you walk in was great because you were able to quickly get in line! 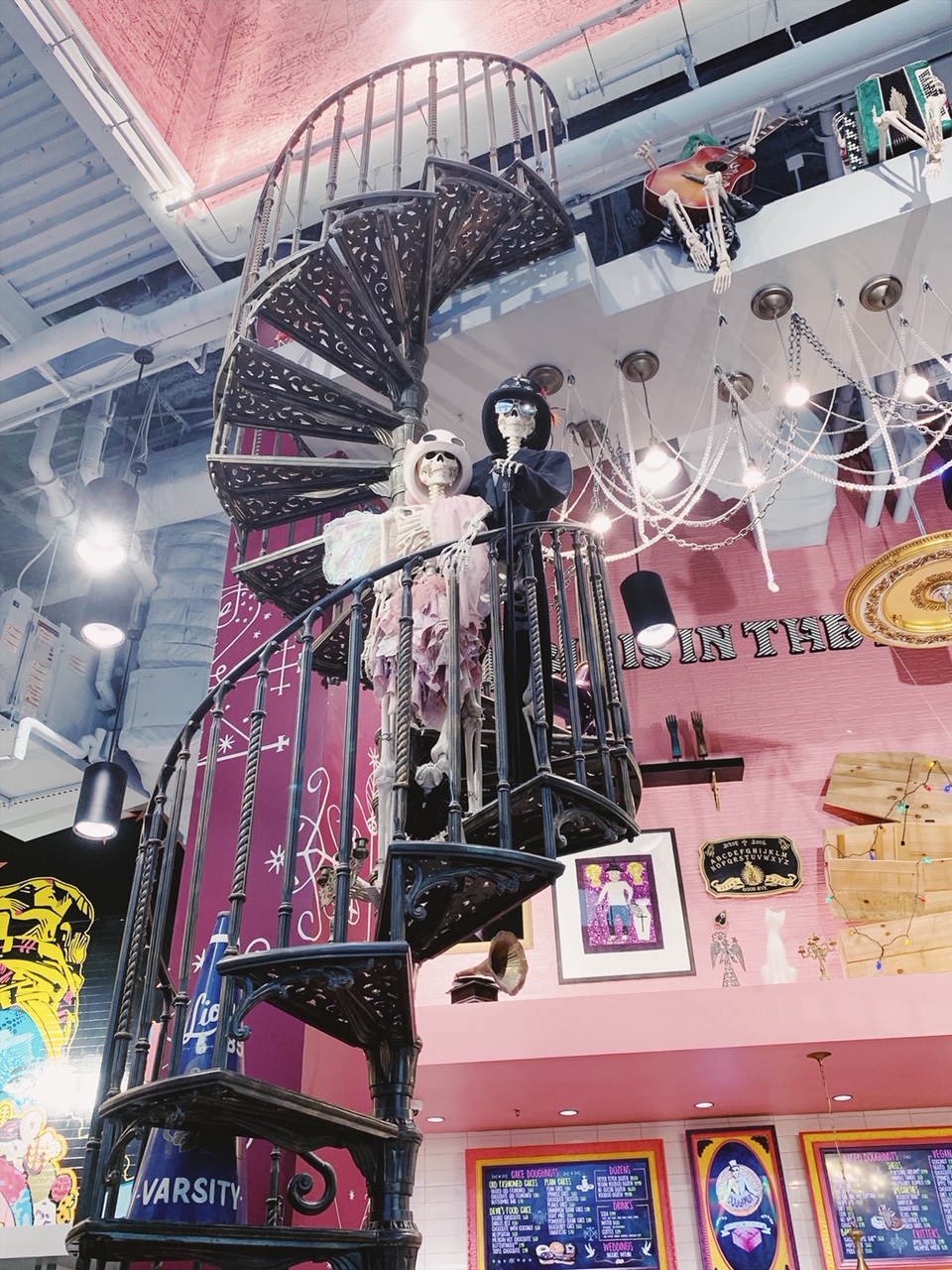 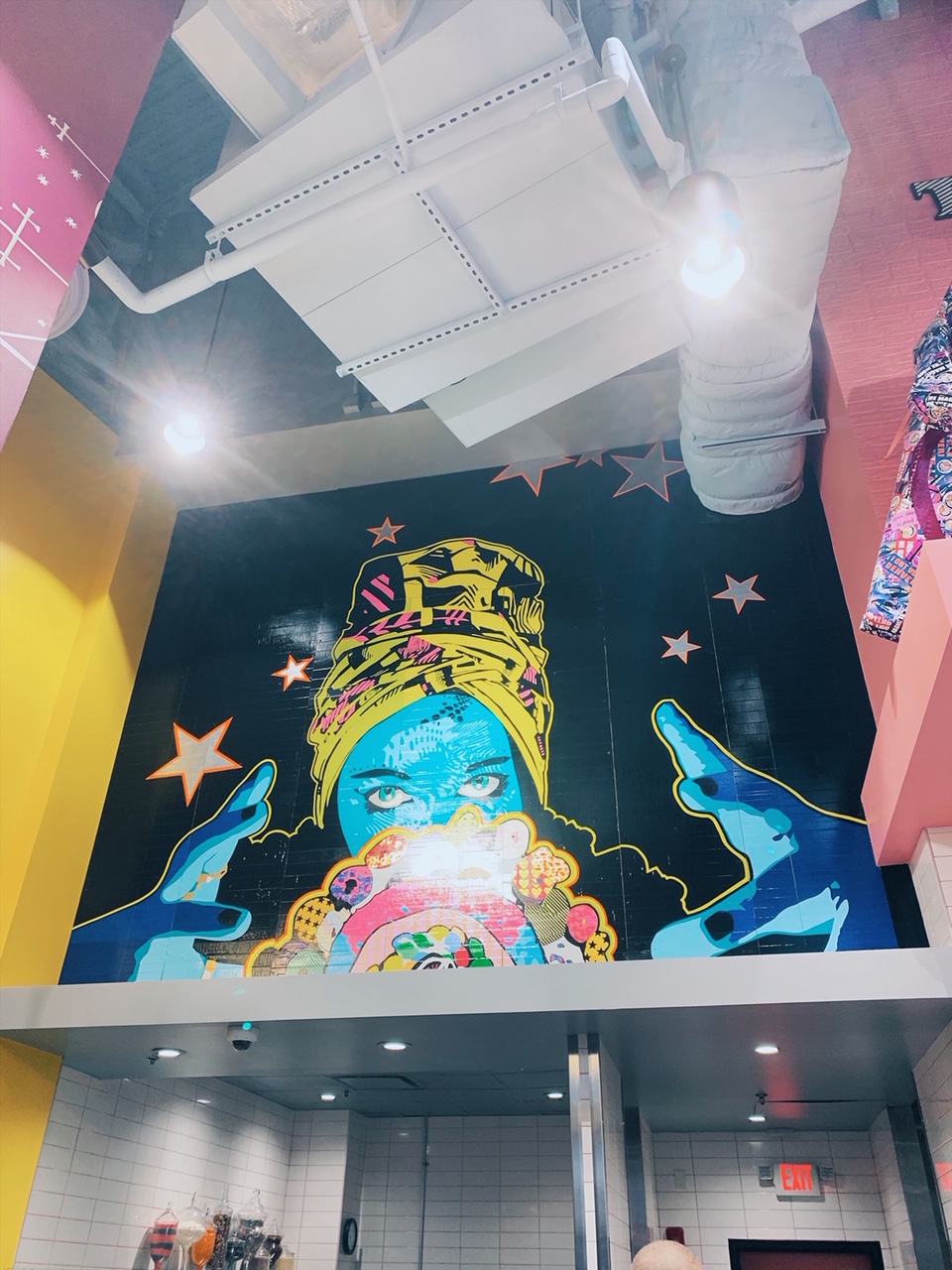 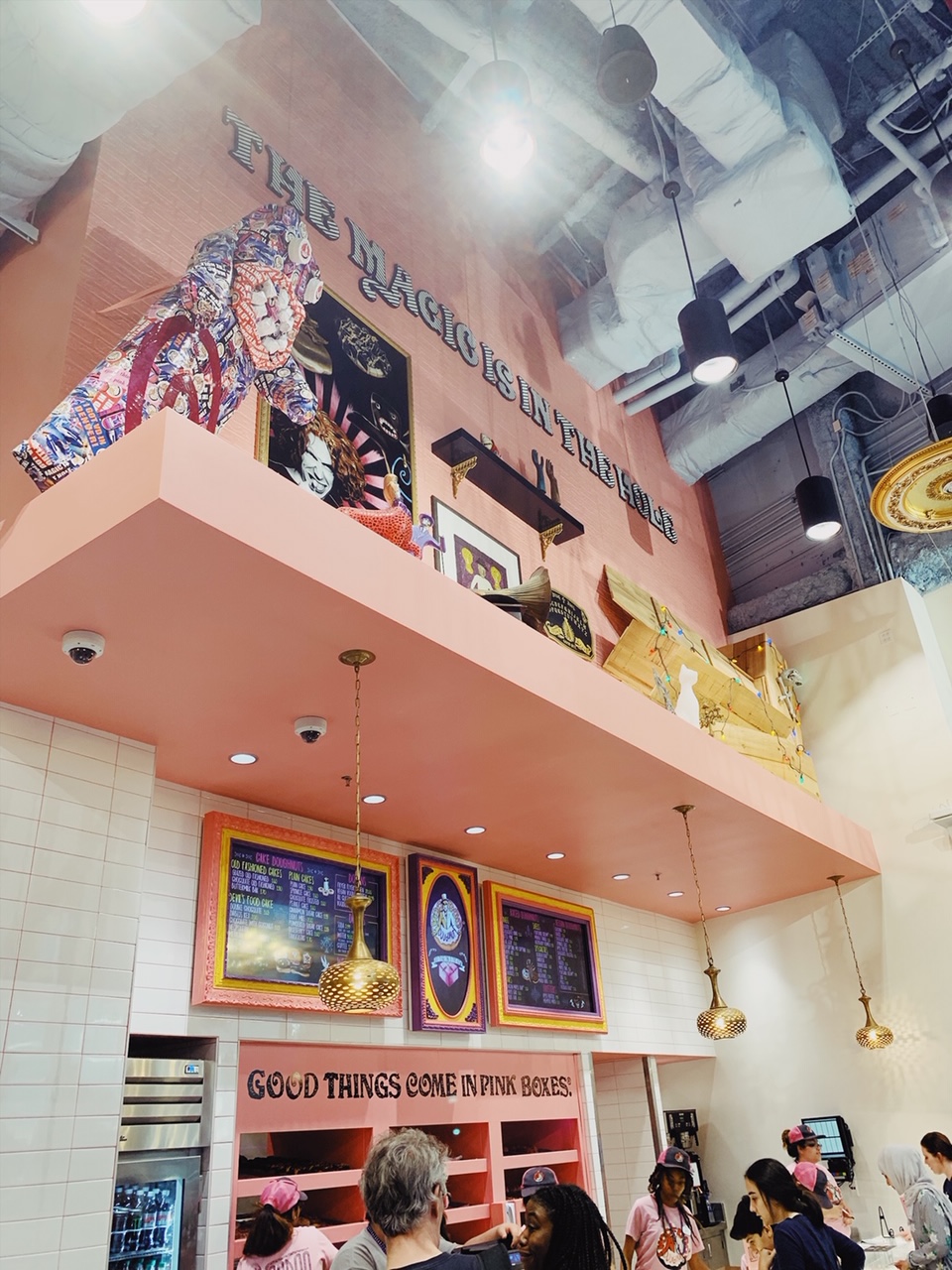 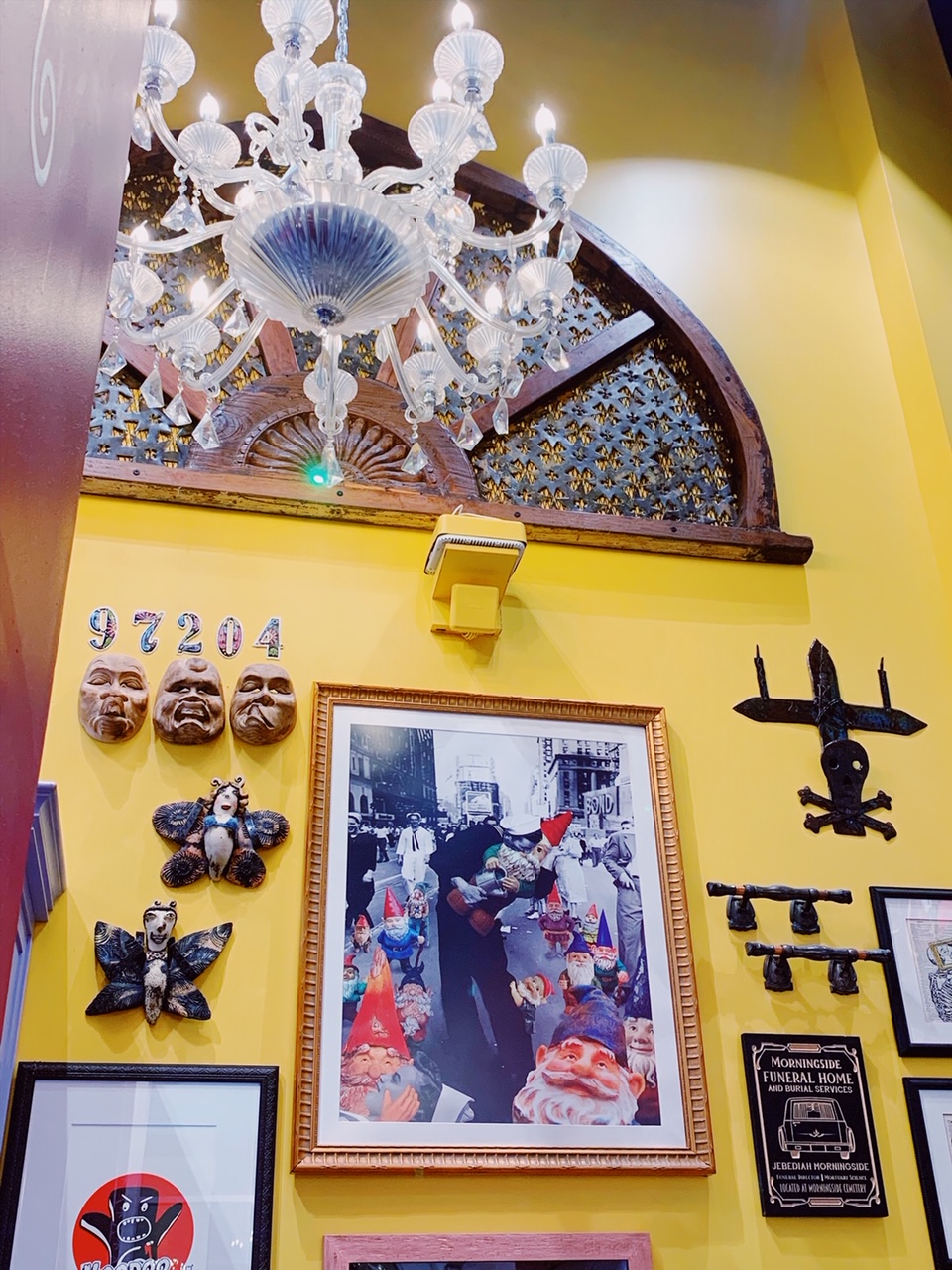 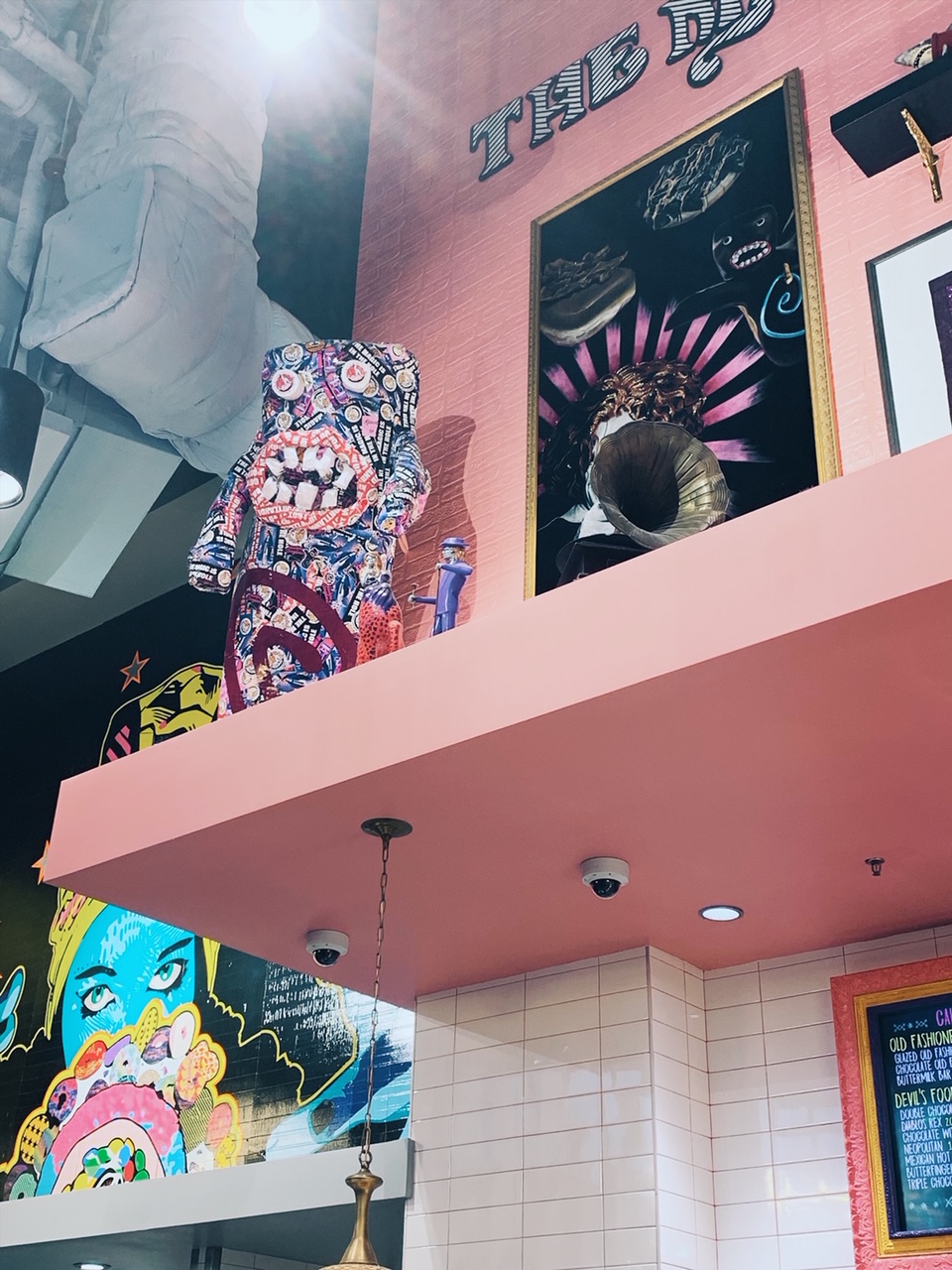 There definitely isn’t a lack of things to look at while you’re waiting in line. I really liked the feel/vibe of Voodoo Doughnut. The overall theme is right up my alley. It’s like spooky weird chic! 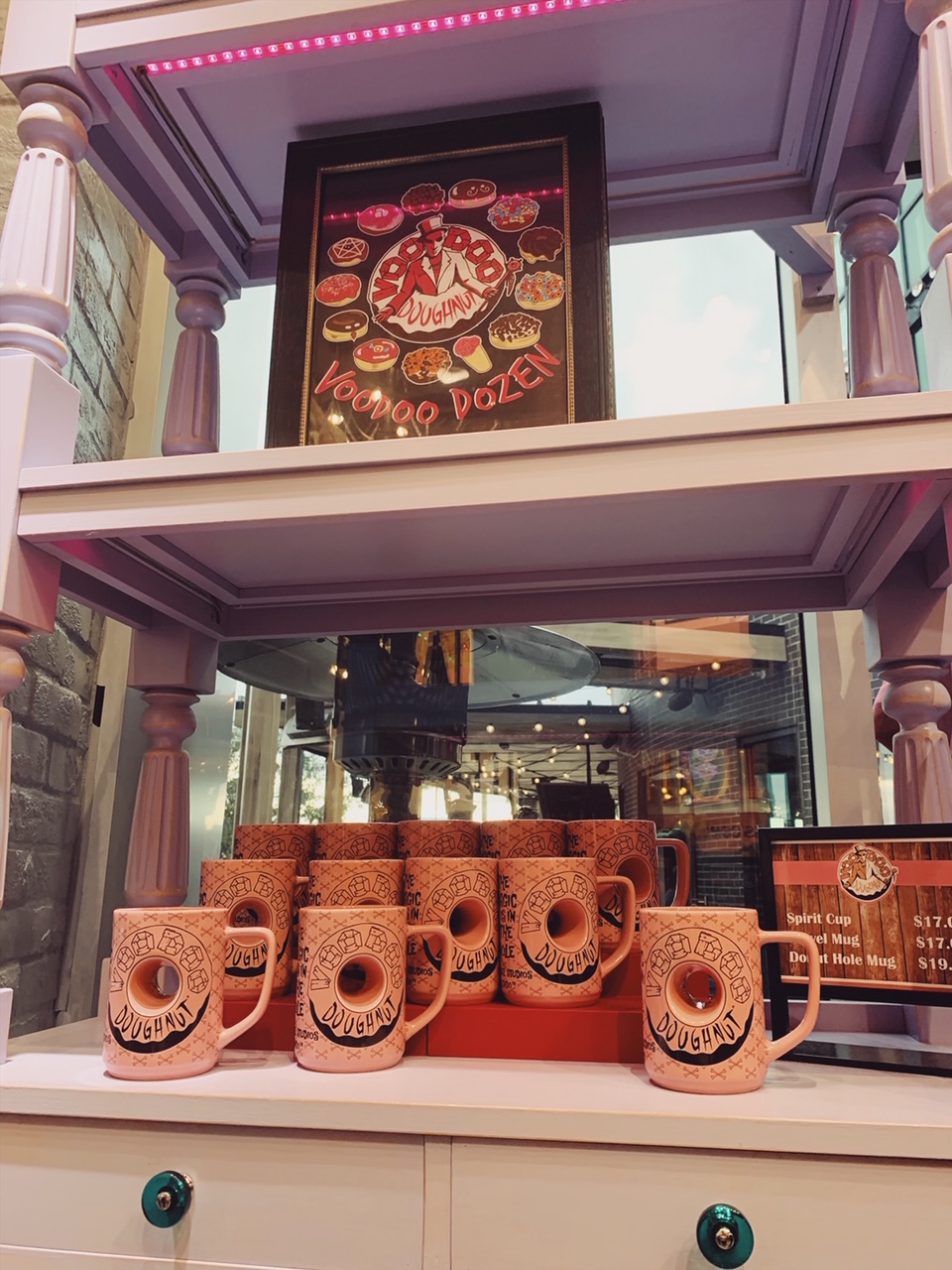 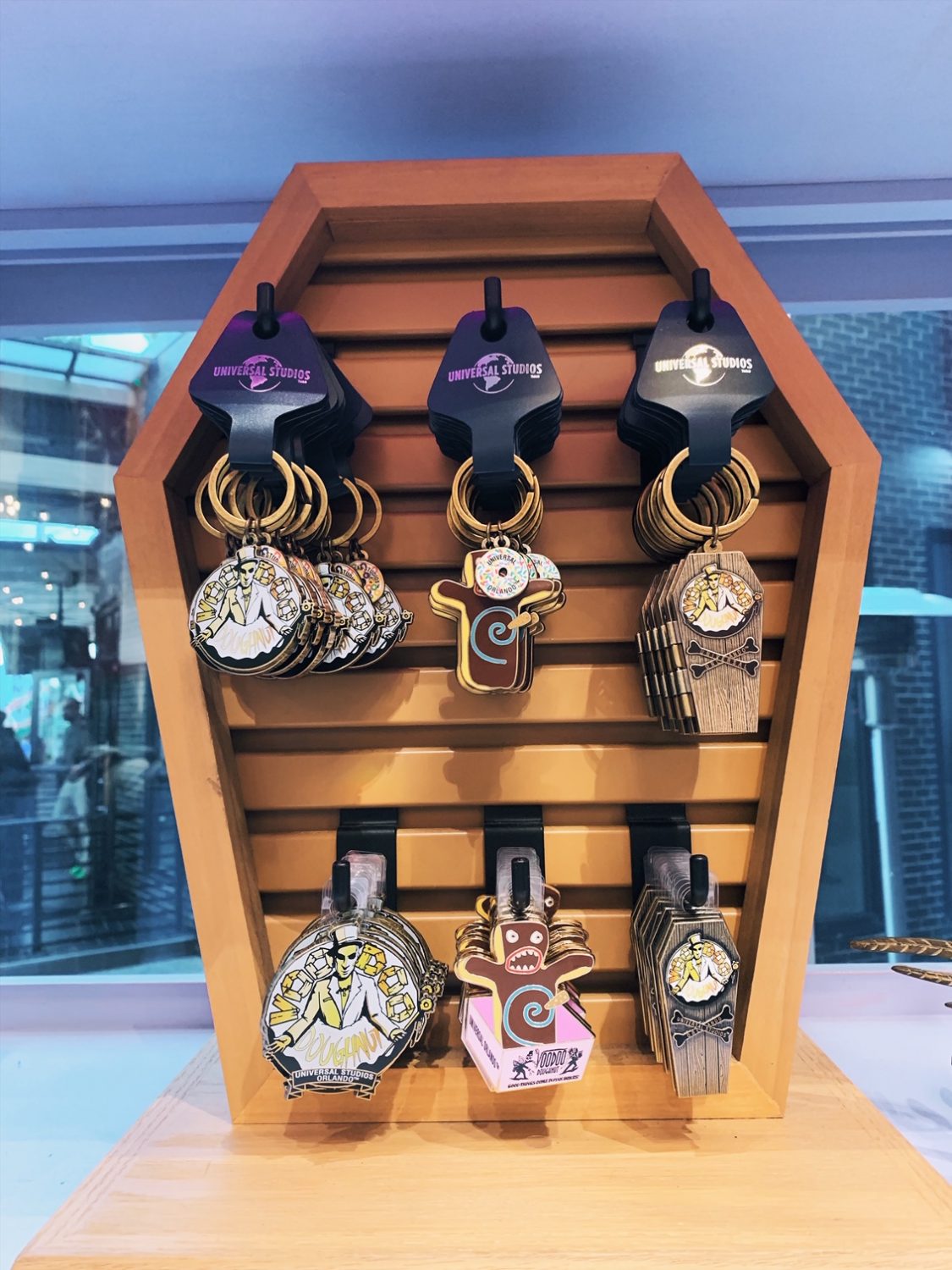 There’s also a bunch of Voodoo Doughnut merch (like pins, keychains, mugs, shirts, etc). scattered through the store. Not going to lie, that voodoo doll doughnut coming out of the box pin is pretty adorable. 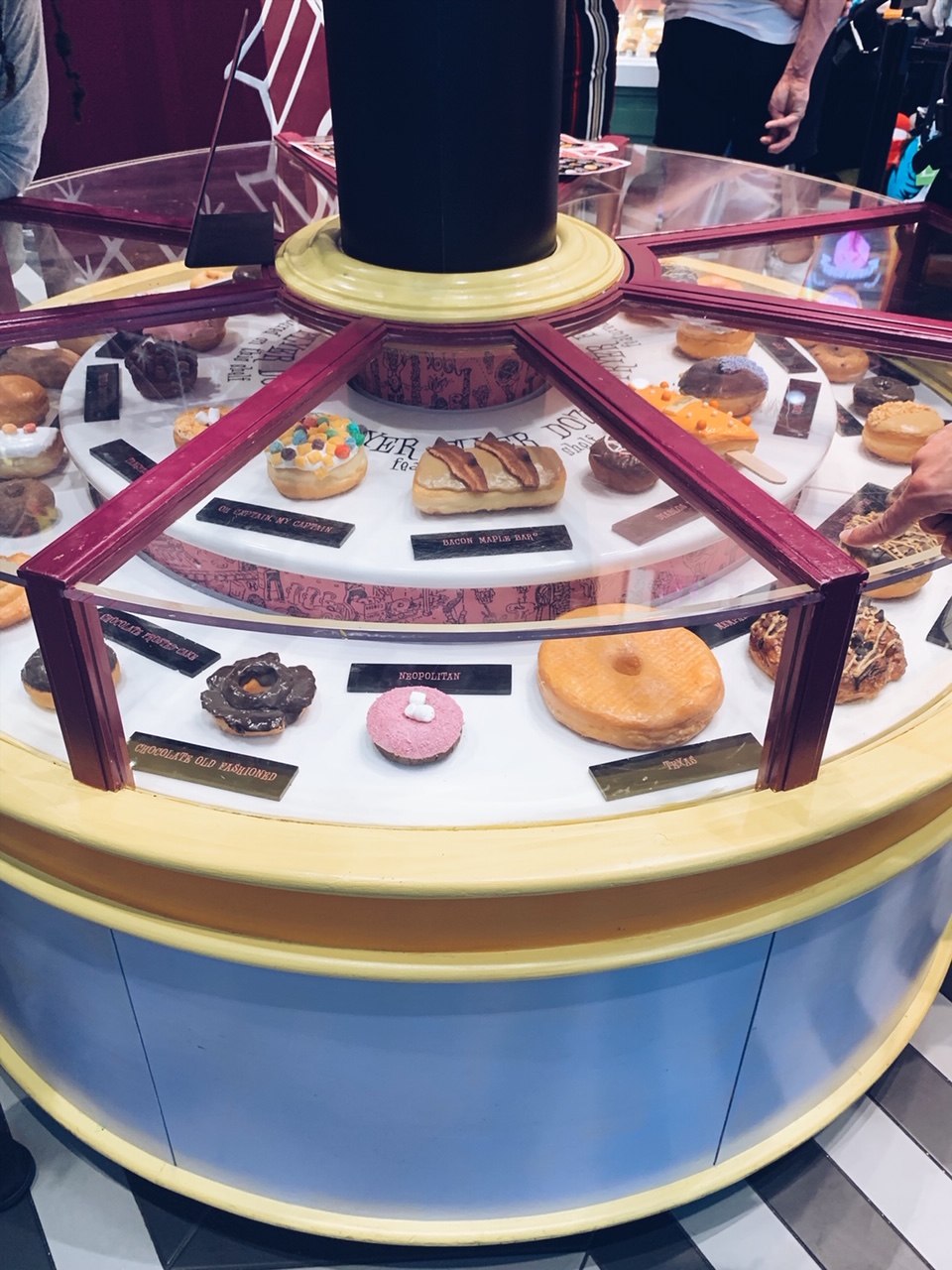 Now on to the part I know you’ve all been waiting for: the doughnuts!

Side note: I just looked it up and I guess “donut” isn’t wrong?! According to the internet (if you didn’t read that in Timmy Turners voice you’re lying): “Doughnut is the original, generally preferred spelling of the word. It is more common in the United States and vastly more common internationally. Donut is an Americanized, shortened version of donut that isn’t incorrect.”

Well color me stupid. I take back my little rant from earlier in the post. 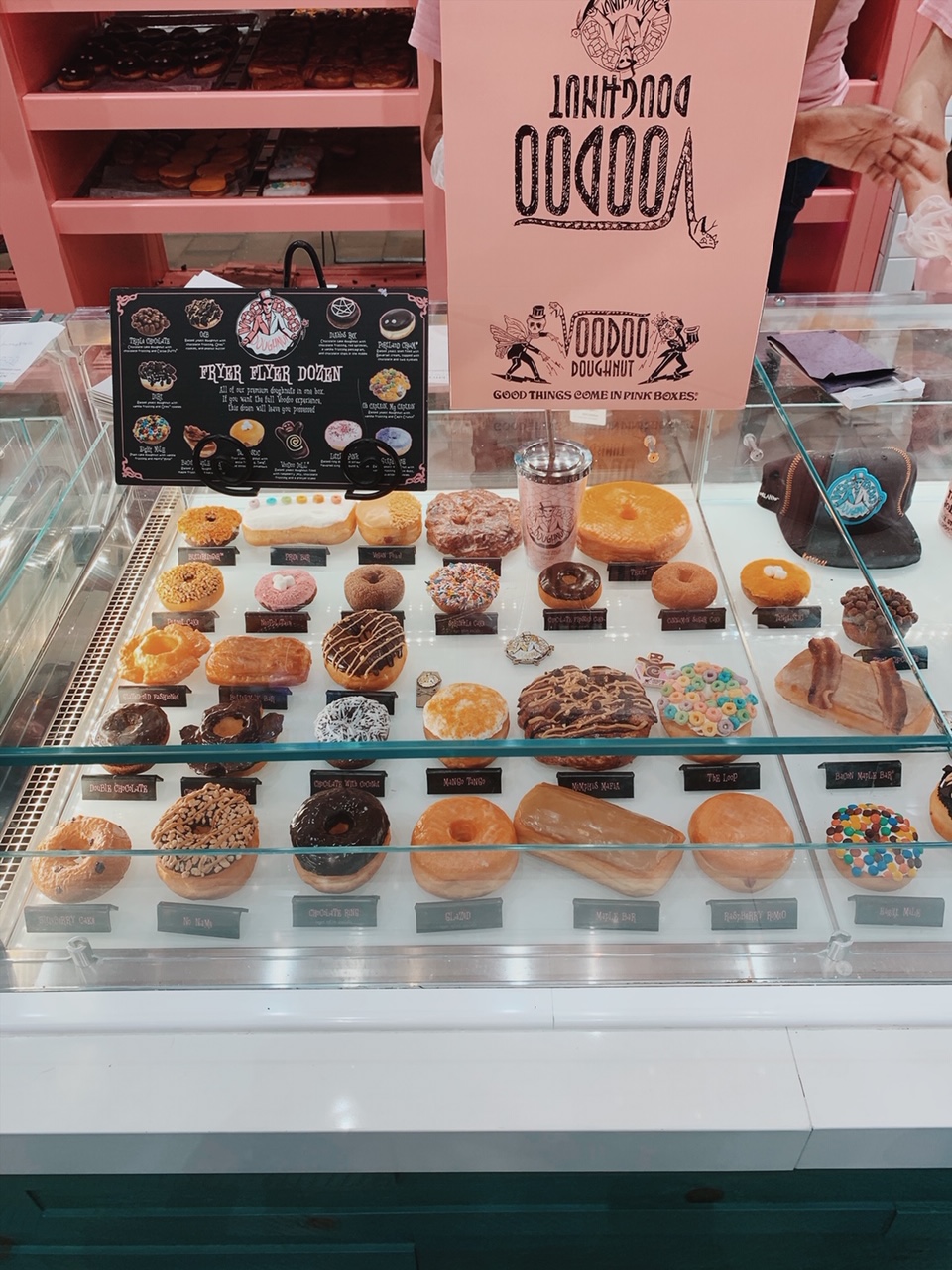 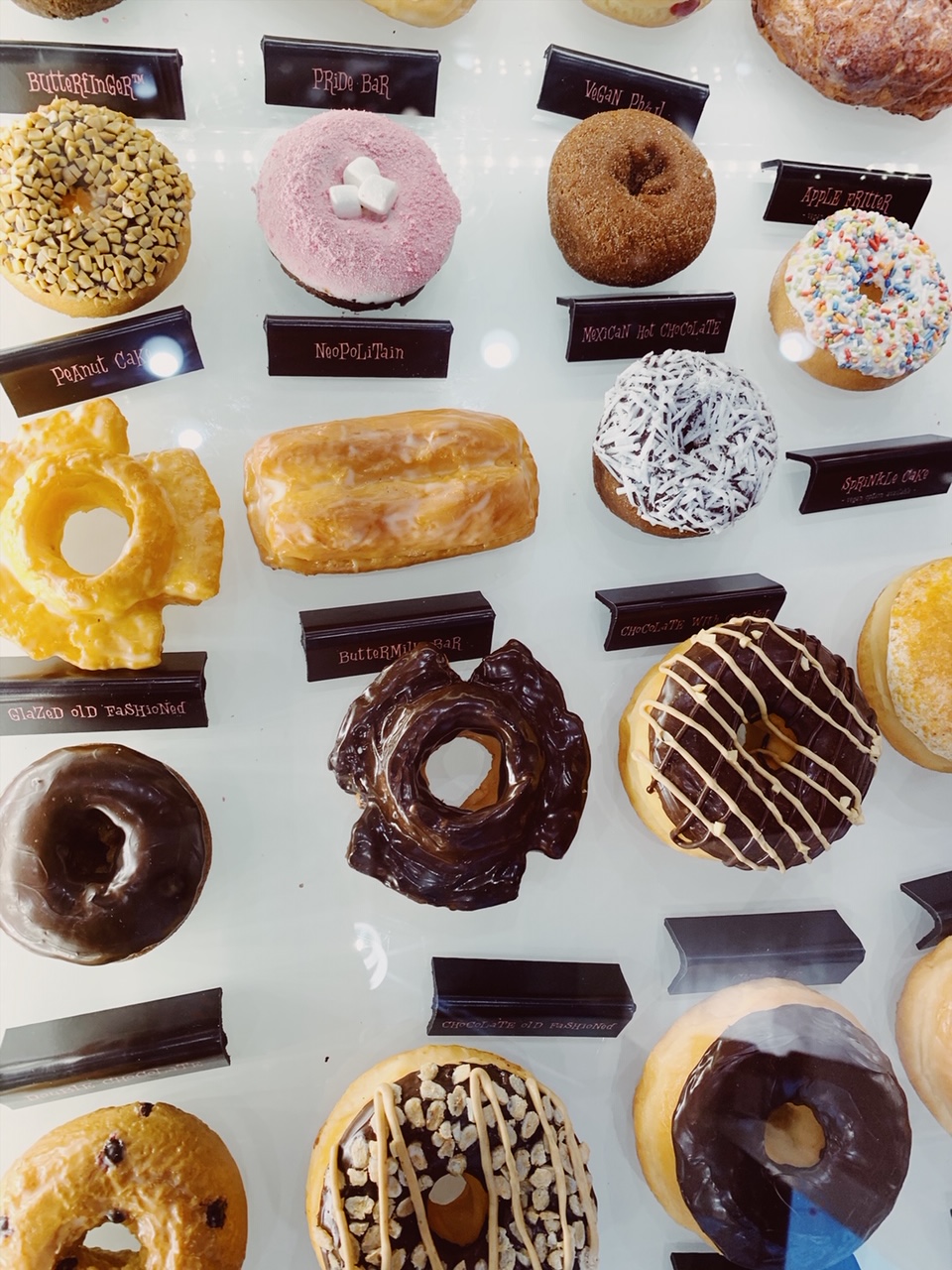 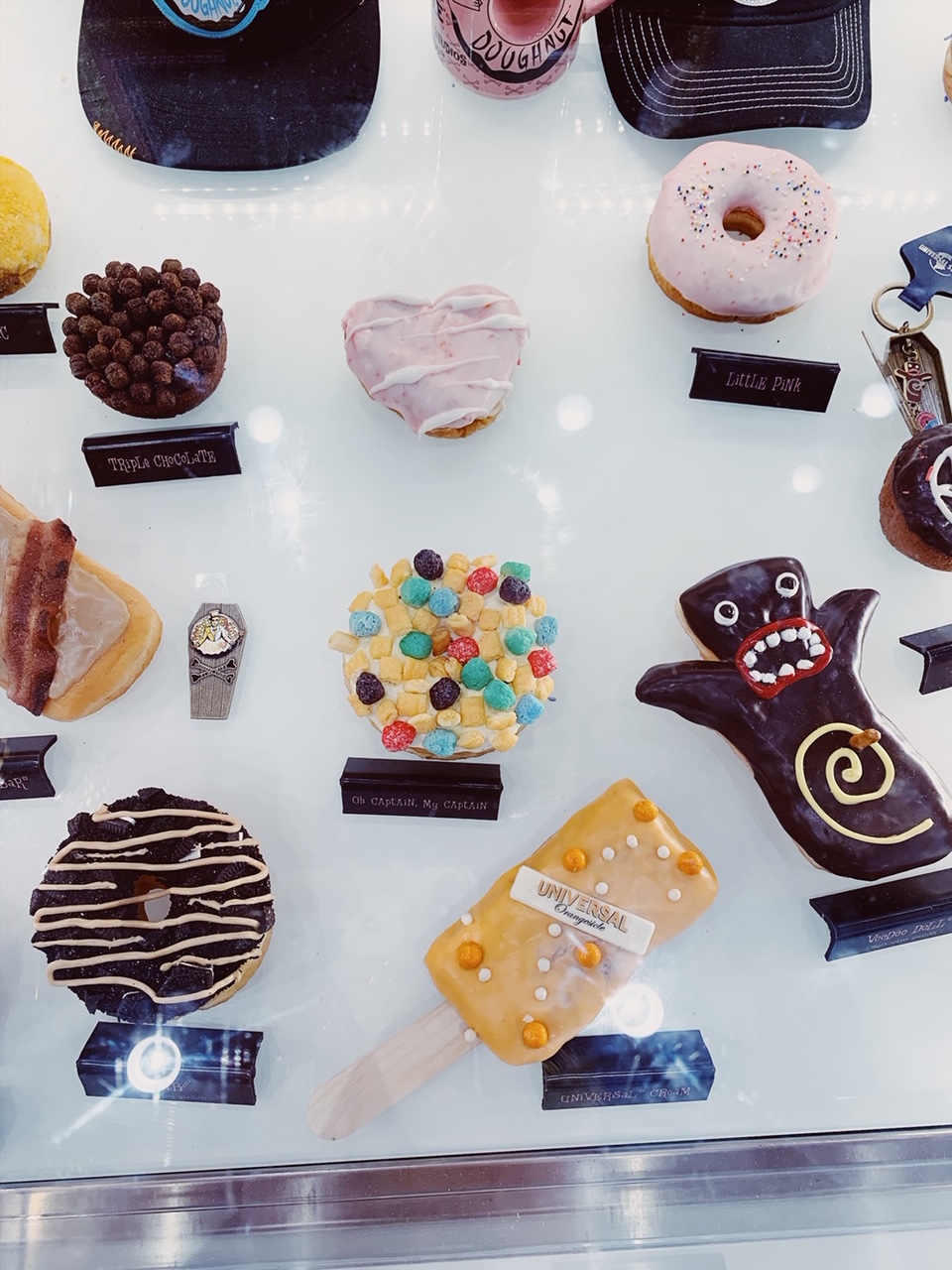 So. Many. Yummy. Options! I’ll admit, my sweet tooth definitely isn’t the same as it used to be when I was a kid. As a kid I could eat an entire bucket of Halloween candy in one sitting. But as an adult, I rarely crave sweets. In fact, my teeth have gotten so sensitive that I can barely handle eating super sweet things anymore.

BUT, that didn’t stop me from living my best life at Voodoo Doughnut! 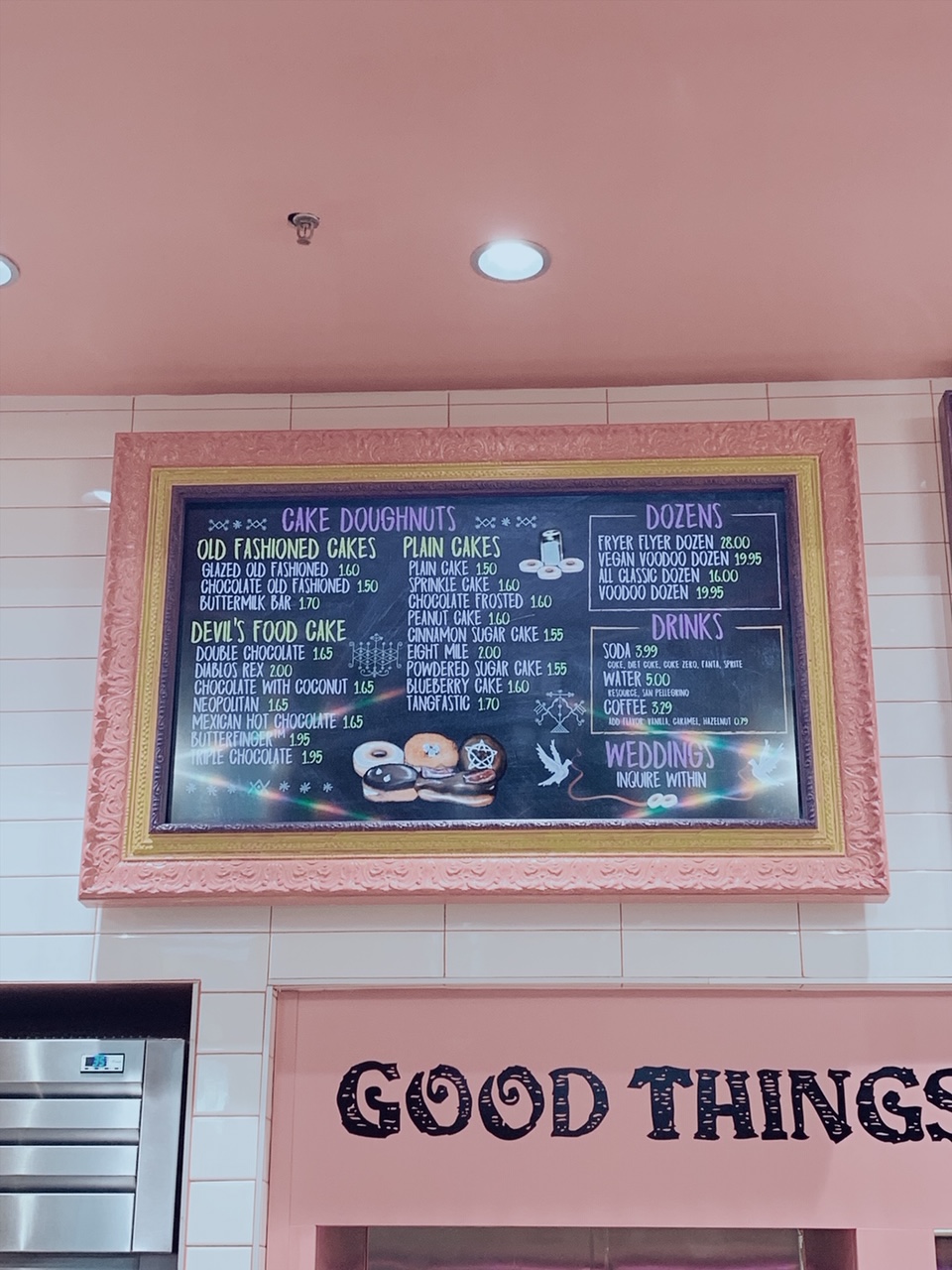 The process to buy the doughnuts goes as follows: You enter the building, are handed a menu and are ushered into the line. Depending on the time of day and crowd level, you’ll be waiting in line anywhere between 10-30 minutes. I waited in line for about 11 minutes, so not to bad.

Once you get to the front of line you’re greeted by a huge glass case of doughnuts and then you, obviously, place your order. 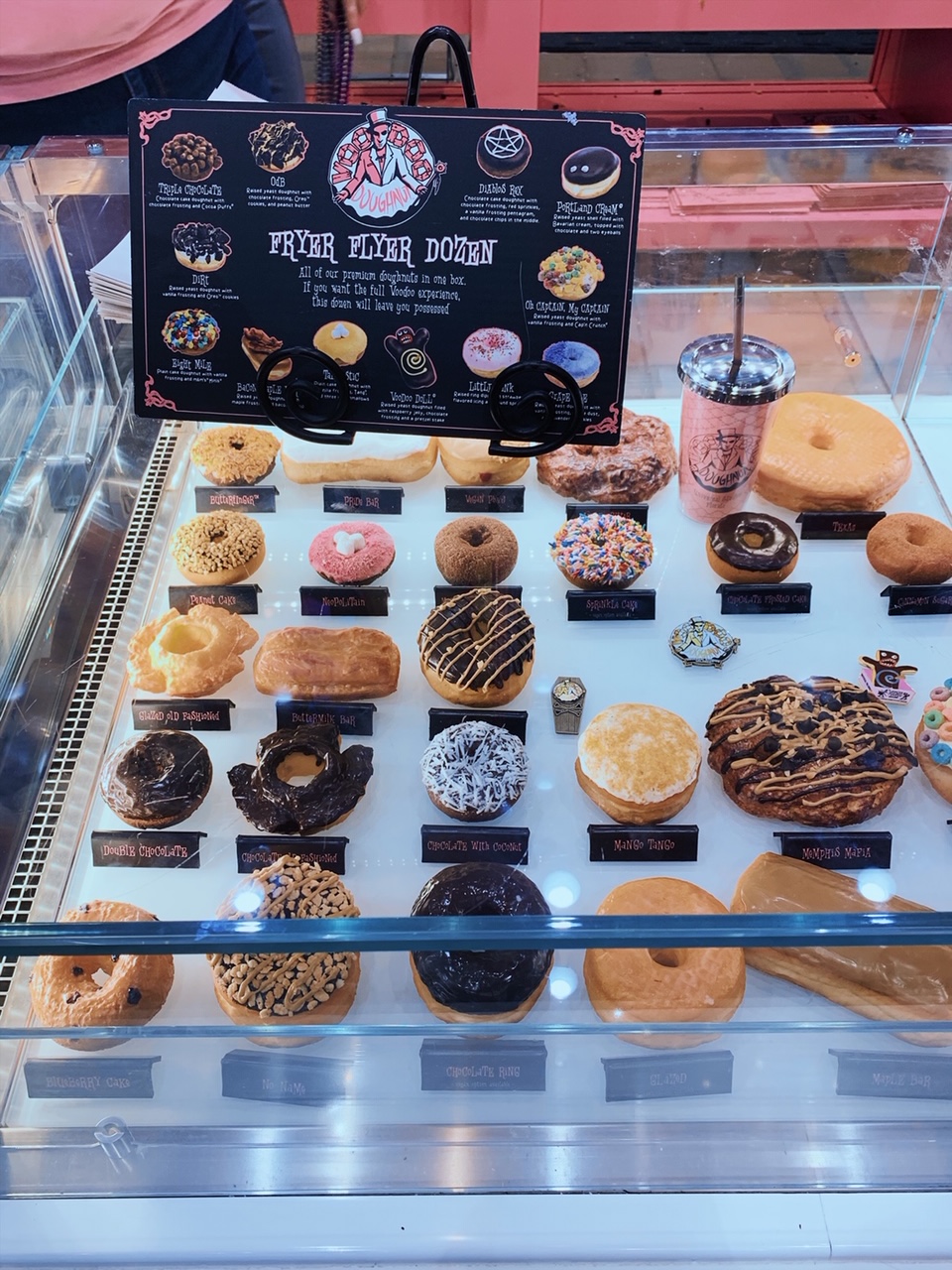 In the end I decided to try the “Fryer Flyer Dozen”, which included a dozen (but really 13) of the most popular and talked about doughnuts from Voodoo Doughnut. 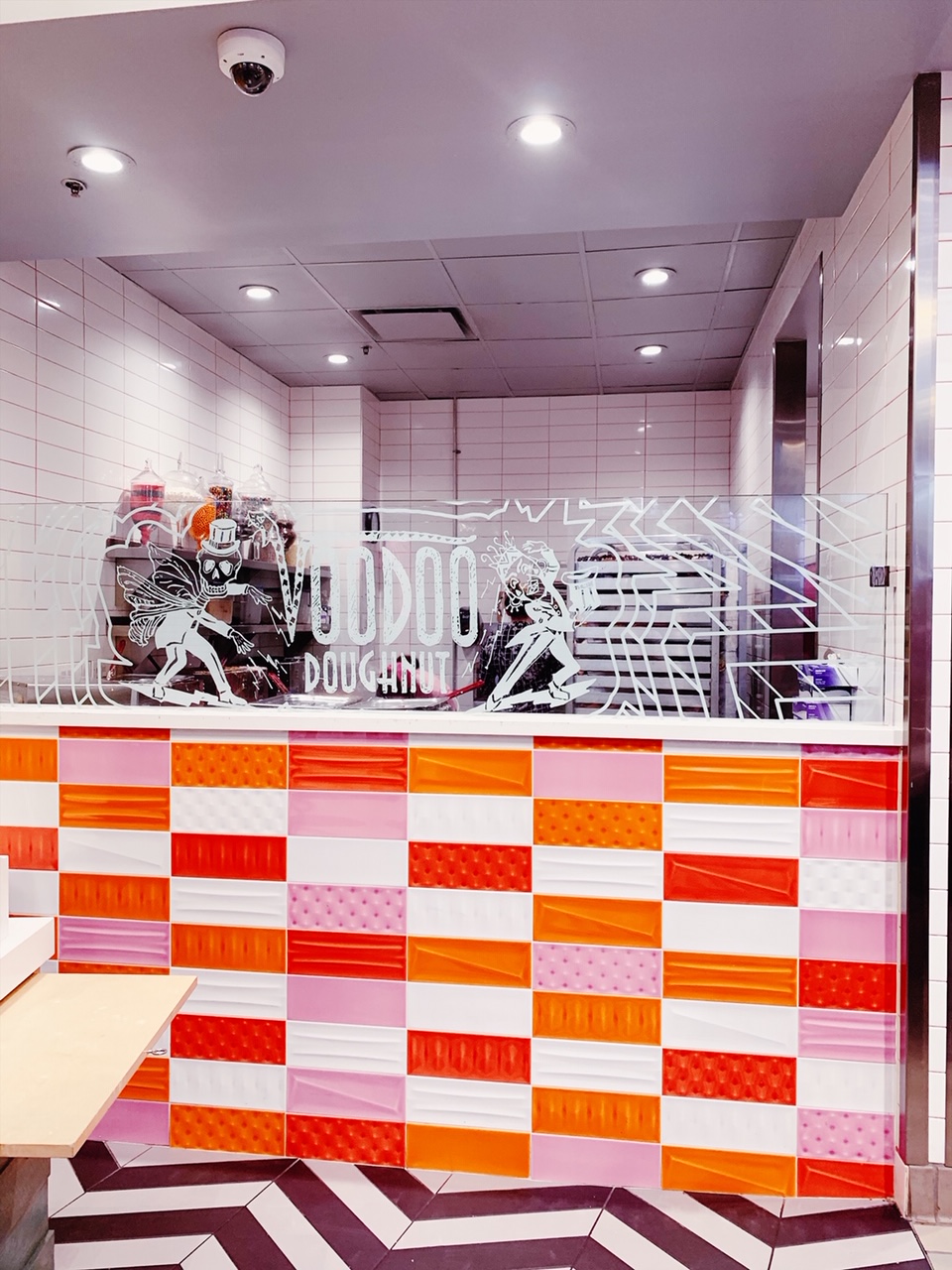 After you place your order, you move to a different line to pay. (There’s a lot of lines, I know, but trust me, this part moves pretty quickly. Then you have to wait off to the side until your name is called. Even if you just order a single doughnut, you’ll have to wait until your name/order is called. And then the magic happens. They call your name and you are greeted with a big pink box (well, depending on what you ordered). As their tagline says: “good things come in pink boxes.” 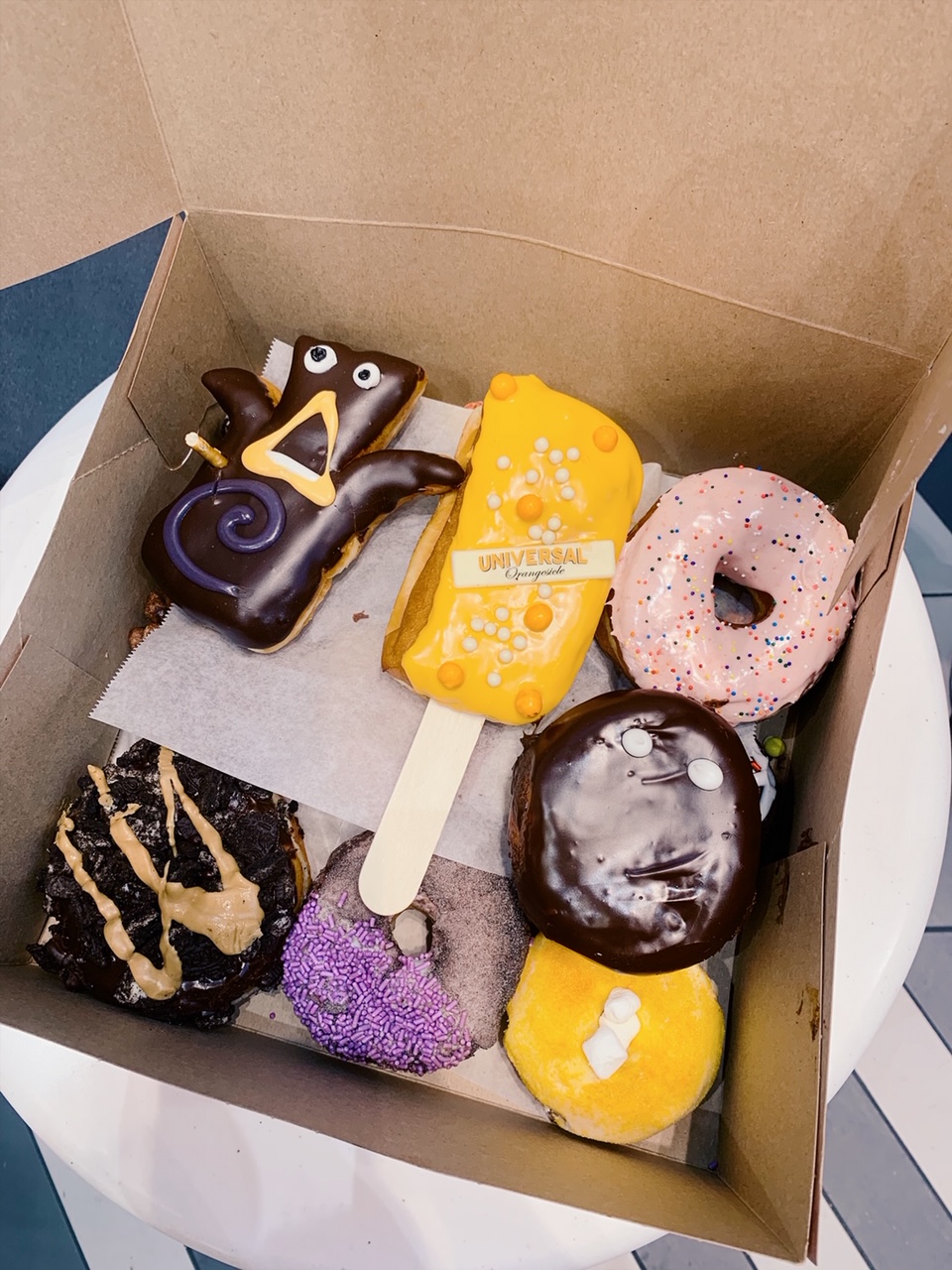 I could already feel myself getting a cavity by just peeking inside of the box! 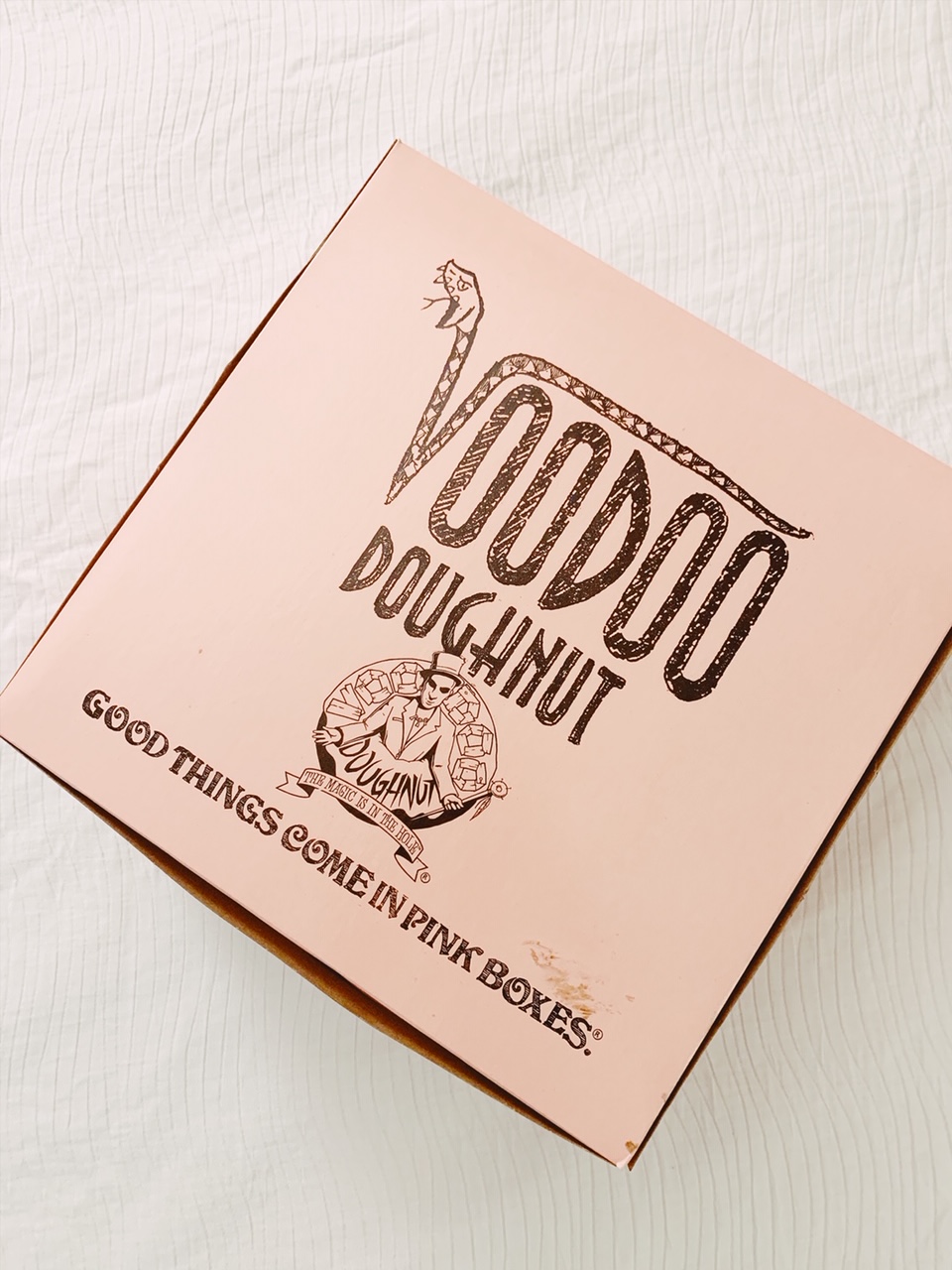 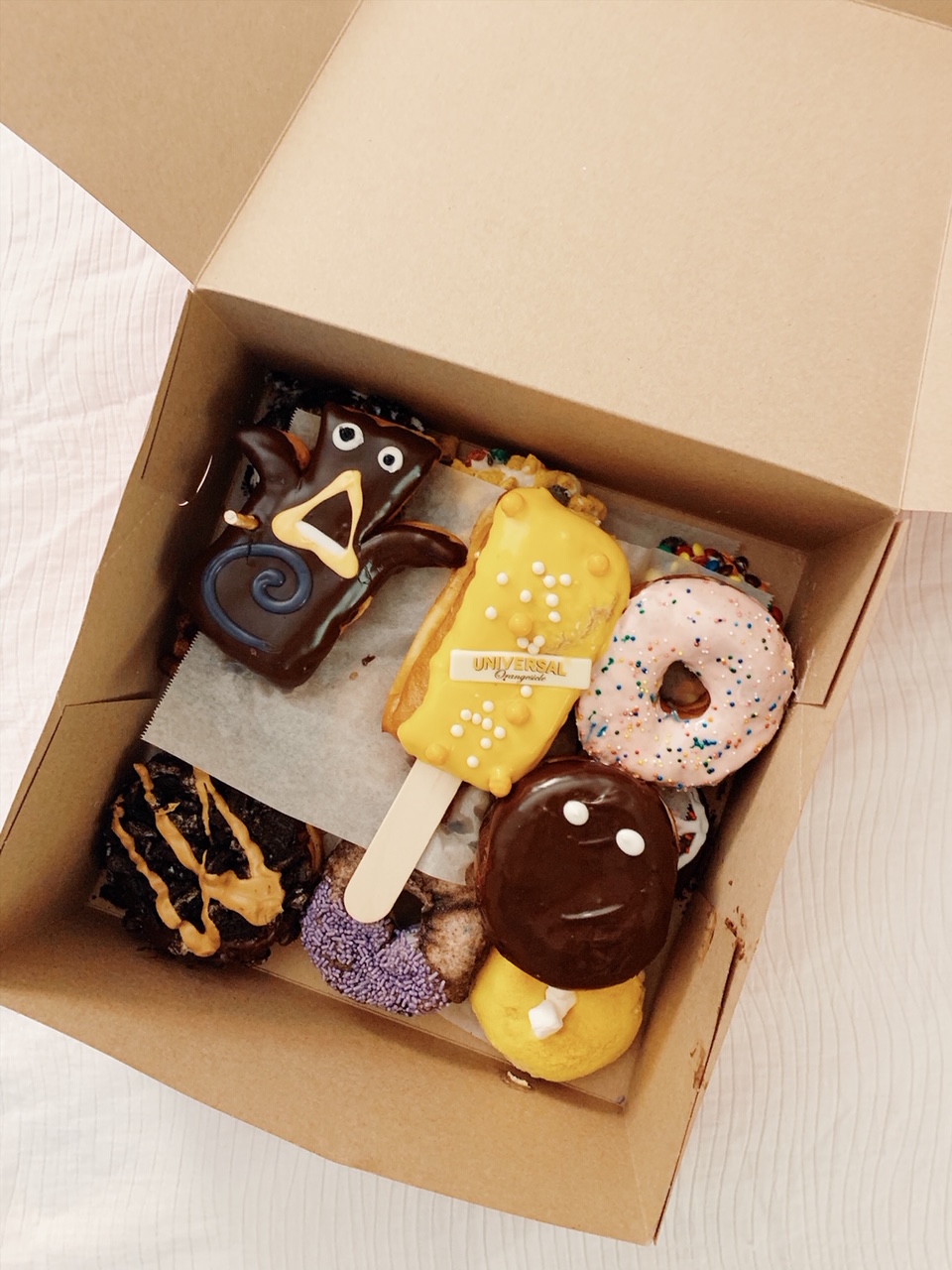 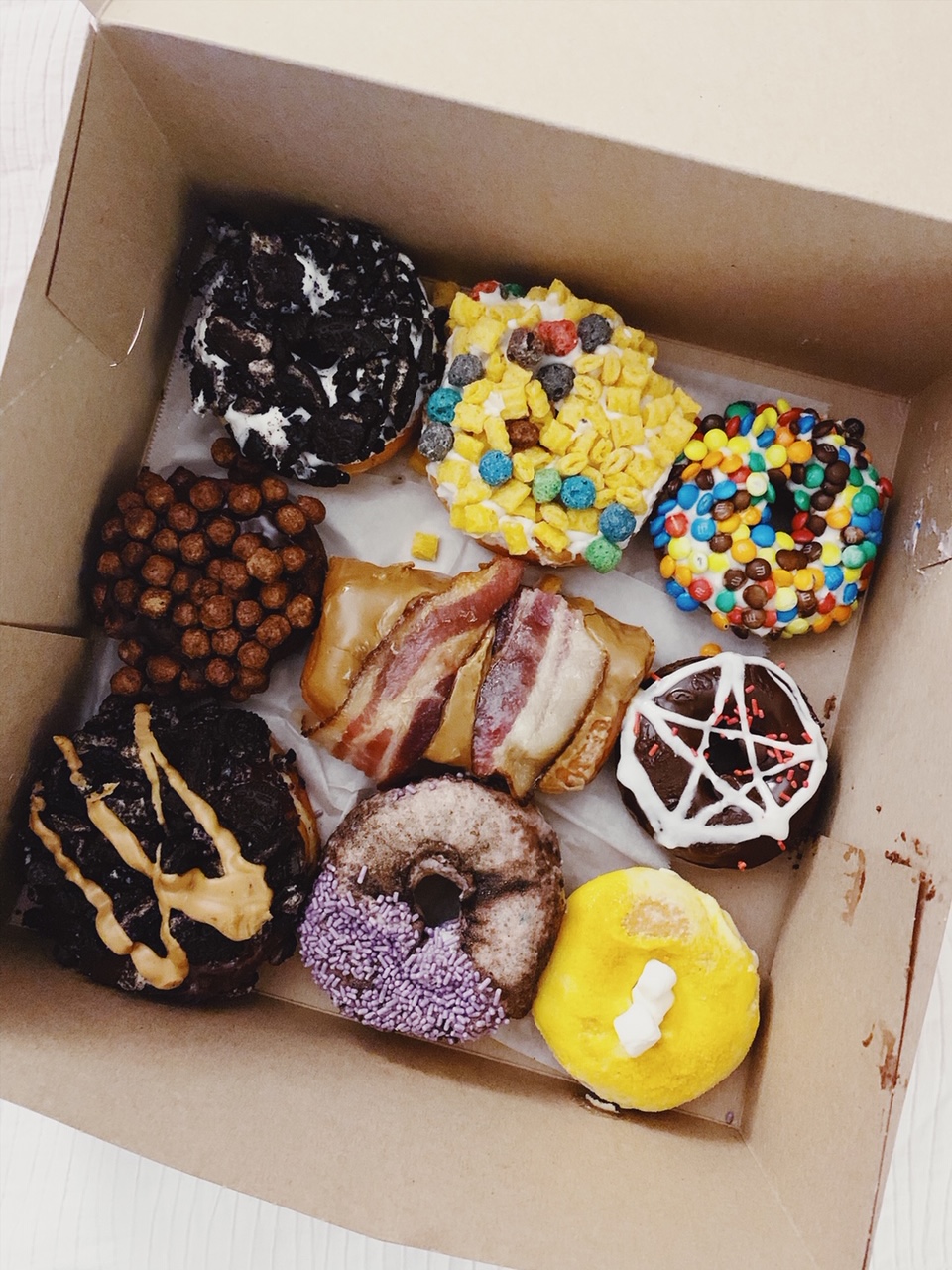 What an experience! Every doughnut was SO unique and different (and some were a little strange, not gonna lie). I will say this, don’t try to eat every doughnut in one sitting. Savor them. The doughnuts lasted/stayed fresh for almost three days after I purchased them. However, the doughnuts with cereal and cookies do start to get a little soggy so be sure to eat those first! 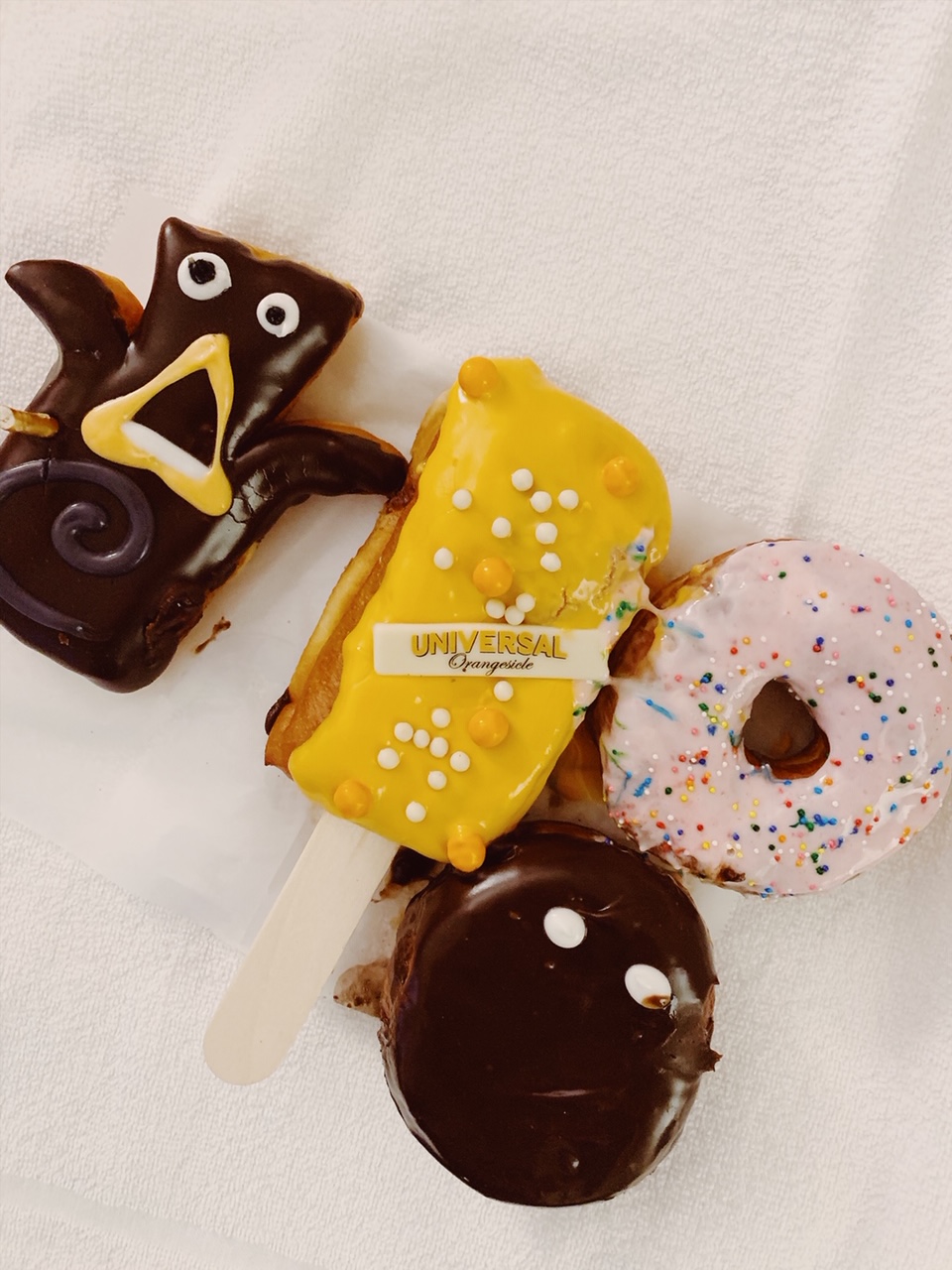 The doughnut that made me go “who the F thought of this?” was definitely the Grape Ape (a raised yeast doughnut with vanilla frosting, grape dust, and lavender sprinkles). My least favorite was the Maple Bacon Bar (#sorrynotsorry I’m not a bacon fan!).

The Fryer Flyer Dozen was $28 and included 13 doughnuts. So at roughly $2.15 per doughnut, that’s not half bad! I definitely recommend checking out Voodoo Doughnuts if you’re in the Orlando area (or close by another location!).